XEL: Between a Rock and a Hard Place

The developers of XEL make a bold claim that it’s a Zelda-like action RPG. You play as a female protagonist who ends up crash landing on a 3D sci-fi planet. She has no collection of who she is or why she’s there. She doesn’t even know her own name. The goal in XEL is to find out more about this girl’s mysterious past, as you explore the world in which she lands. Along the way, she has a floating robot companion. Fortunately the robot doesn’t talk anywhere near as much as it does Navi from Ocarina of Time.

As to whether I recommend the game or not, however, I’m conflicted. Part of me does say you should get the game, another part of me says stay away. 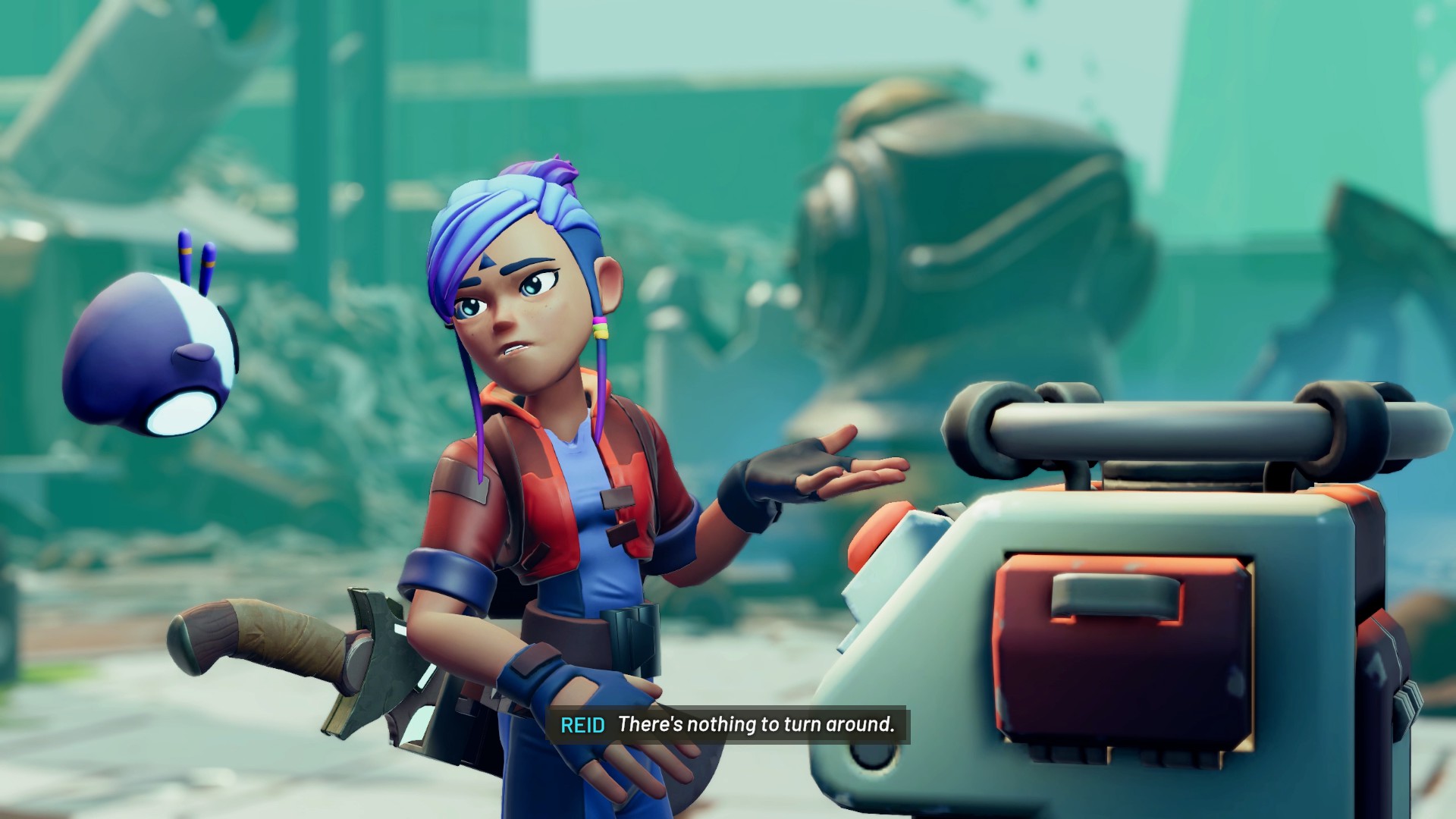 As you play the game, you will indeed discover that the mechanics and in-game weapons play similarly to the top-down Zelda games, from the sword and shield that the girl gets in her travels (a character she encounters later on in the game gives her the name Reid), to the combat mechanics as she encounters sci-fi-like enemies, who for some reason attack her. For this, the game does an okay job.

I also like the fact that – for a game that’s only $15 – there’s full voice acting for all of the characters. Even the robot talks, though it speaks gibberish (somehow Reid can understand it though). There’s a few in-game cutscenes as well. I was honestly not expecting that as I went into this.

The sad problem is there’s a few quirks that stand in the way. There are times where the game does a poor job explaining to you where you need to go next, and looking at the in-game map doesn’t help as there’s no indictator of any sort. There’s not even some text explaining where you need to go, at least not after having a conservation with a NPC. Remember what they say well, because otherwise you’re going to be lost. 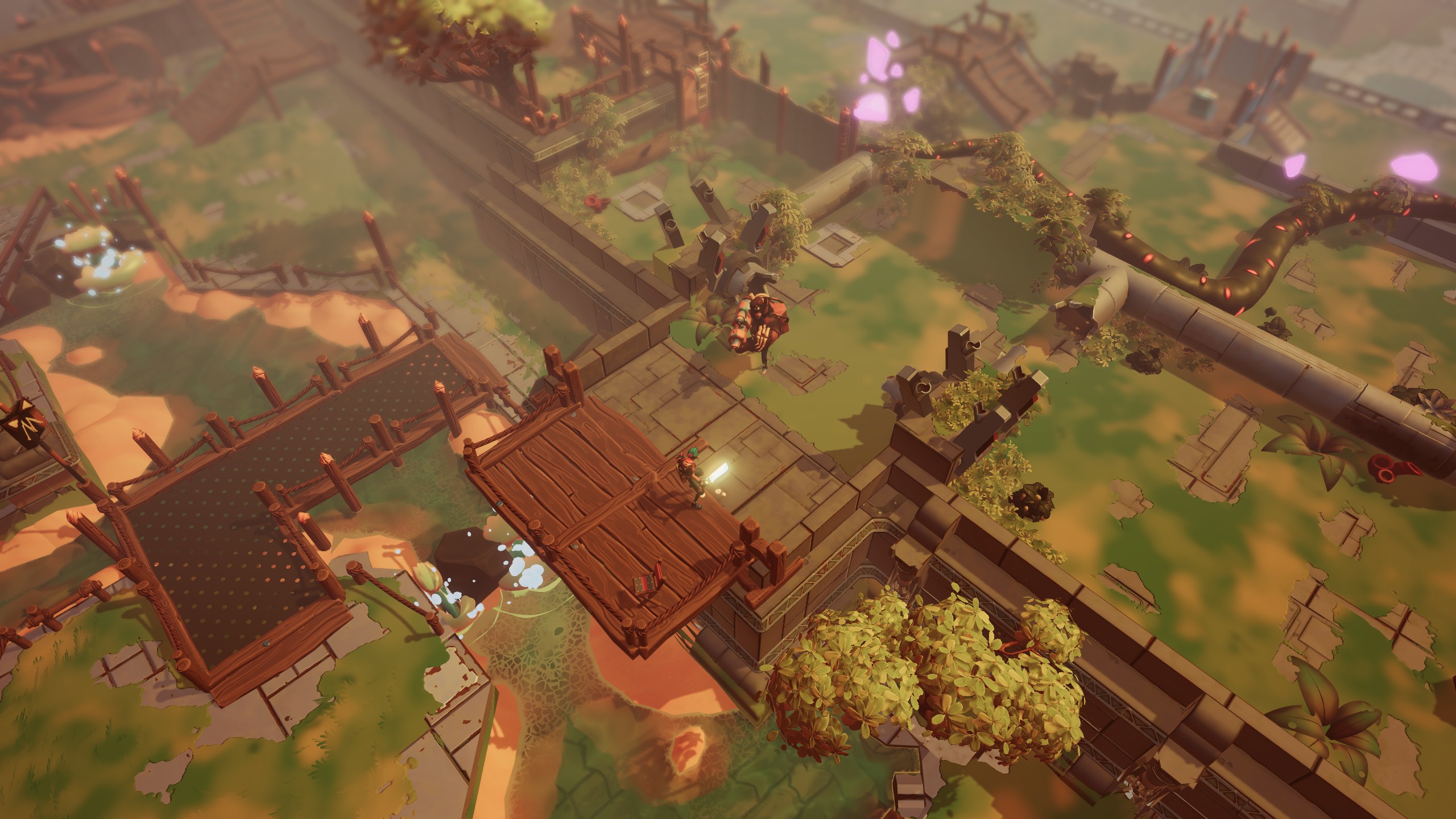 There’s other times where the game just frankly gets boring. There are parts where exploring feels like a bit of a chore. As far as I know, there’s no way of upgrading Reid’s combat skills, as in, being able to utilize different combos when attacking enemies. Just a two-slice combo, shield when appropriate, dodge when appropriate, and that’s kind of the barebones of the combat. Later on she does get different weapons, but the pacing with that is kind of slow.

There’s weird bugs going on. Occasionally I’ve noticed a NPC slowly drifting across the ground while they’re standing still. Sometimes I might make Reid jump into an unintended area and she’ll get stuck. The only way I can make her move again is if I restart the game. And better hope your game was saved prior to doing this, because if you didn’t, you’re going to lose all your progress (saving is done manually in this game).

Another flaw is the camera. The game takes place from an isometric perspective. The camera feels way too zoomed out. I can barely see anything going on screen. The camera could definitely benefit from being zoomed in just a little more. I mean, it might have been designed intentionally that way so the player can see more things going on, but that comes at the expense of barely making anything out of the character you’re playing. It makes it difficult to see what your enemies are planning on doing next. 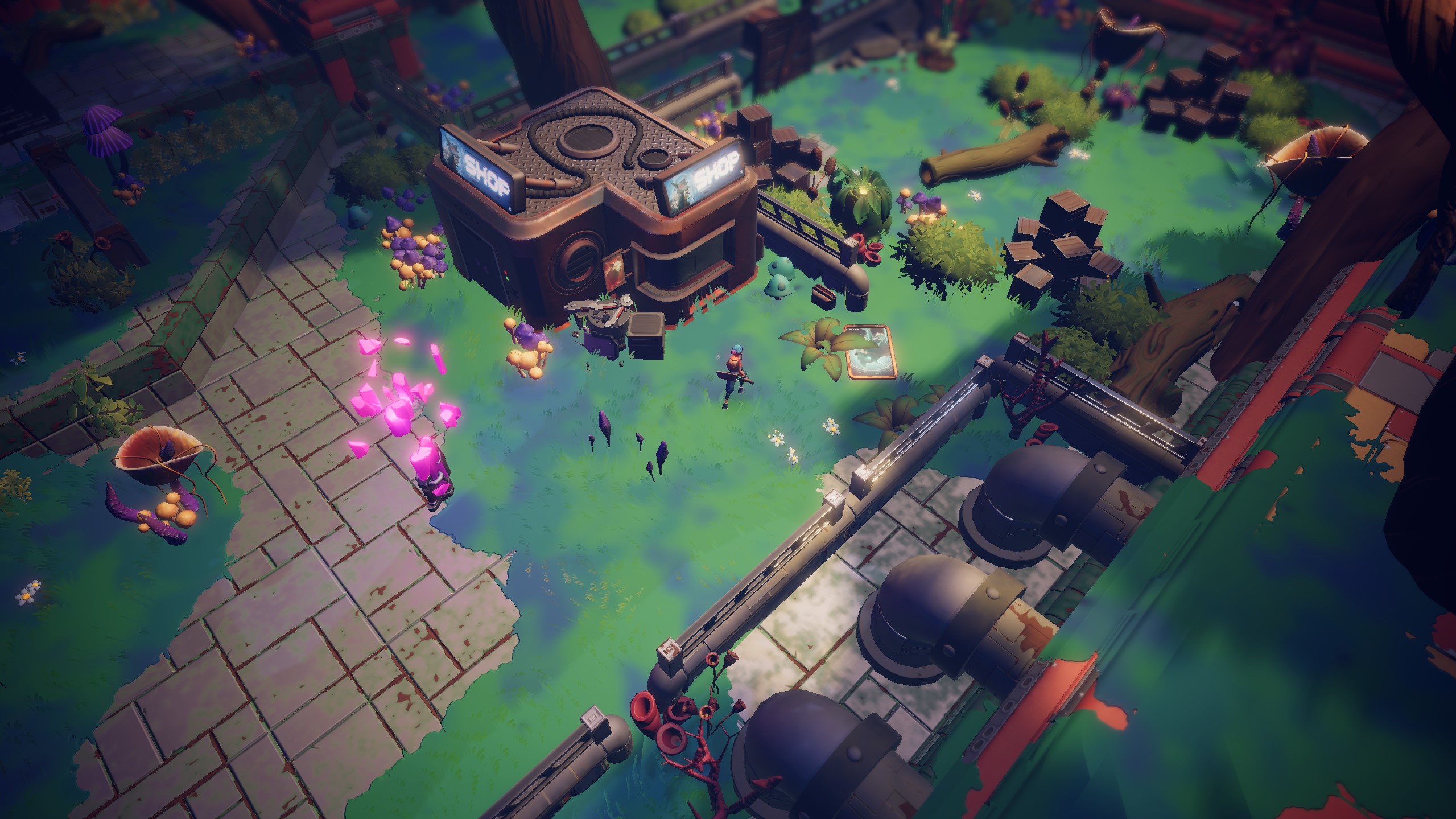 And good thing I didn’t review the Nintendo Switch port; apparently it suffers much worse performance problems than the Steam version.

I didn’t play the game in its’ entirety; apparently it lasts about five hours but I only put in three. The developers have been steadily addressing the feedback that they have received and plugging in patches, but the game still feels boring, the camera is still way too much outward, and there’s still no simple indictator as to where Reid should go next. I have faith that the developers will continue to aggressively work on the game’s kinks, but I’m not sure if I want to continue to play it.

The one good thing I can say about XEL is that it runs reasonably well on Deck. There’s actually 16:10 support from the settings menu. Gameplay is 60 FPS on high settings for the most part. I recommend tuning the resolution down just a little bit though while making use of FSR for a smoother experience. Setting the framerate to 30 FPS, or lowering the refresh rate to 40 Hz, will make the animations look a bit choppy, so keeping it at 60 FPS is ideal. 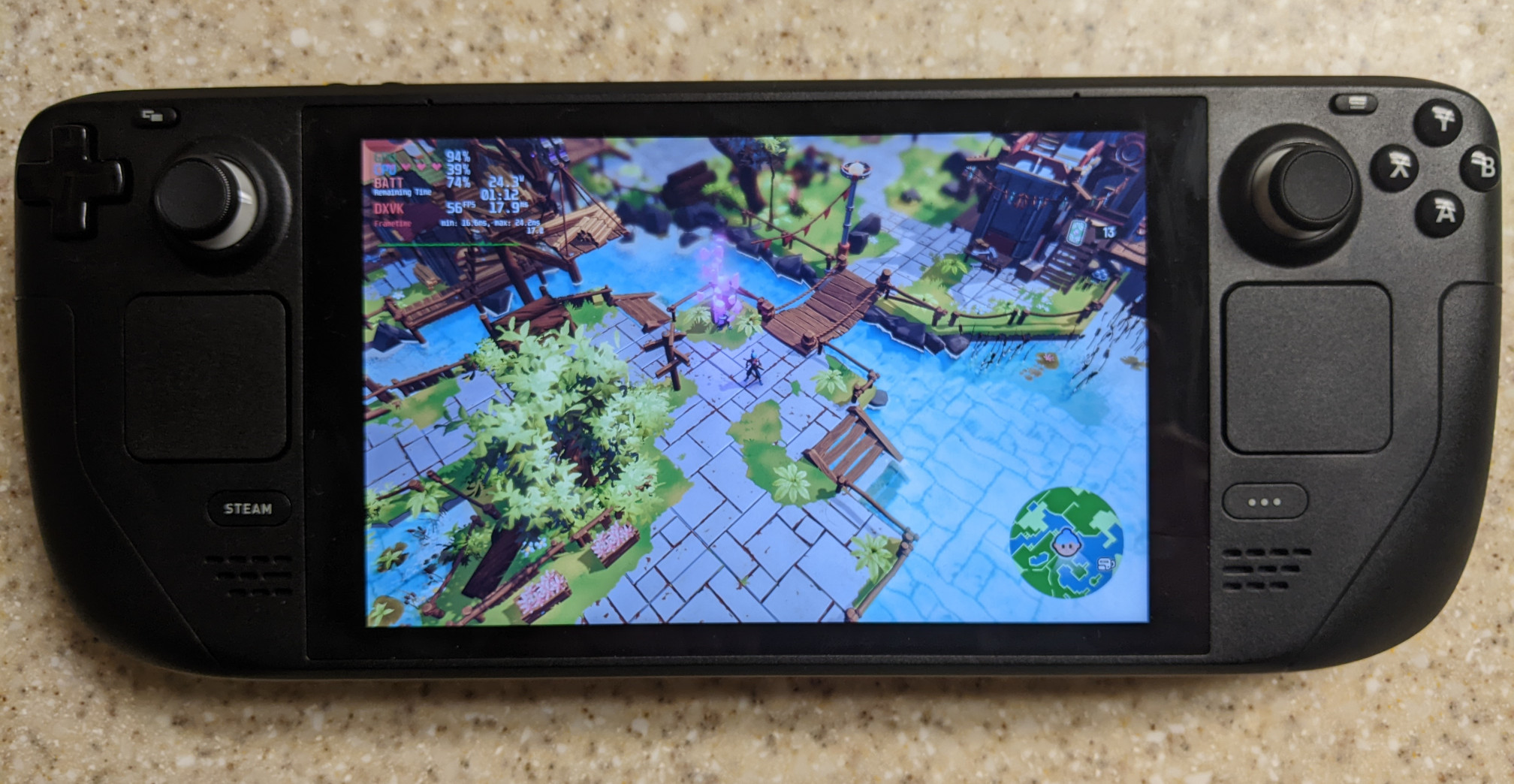 Only other thing I wanted to note here is you should probably use GE-Proton, since it pulls in the video playback patches. Otherwise, on vanilla Proton, you’ll be met with a checkered background on the title screen. I have some footage recorded if you’re interested.

To a certain extent I like XEL. The characters are fairly interesting, the cutscenes aren’t bad, there’s voice acting that’s neither great nor terrible. The Zelda vibes are certainly there. On the other hand there’s several quirks that just turn me off: the bad camera angle, the dull combat, the frustration of not knowing where to go next, and some other weird stuff going on with the NPCs and bugs in general. Quirks that kept me from wanting to play the game in its’ entirety.

Therefore, my recommendation is to wait until some more patches get added, despite how many have been added already, then wait for a sale. 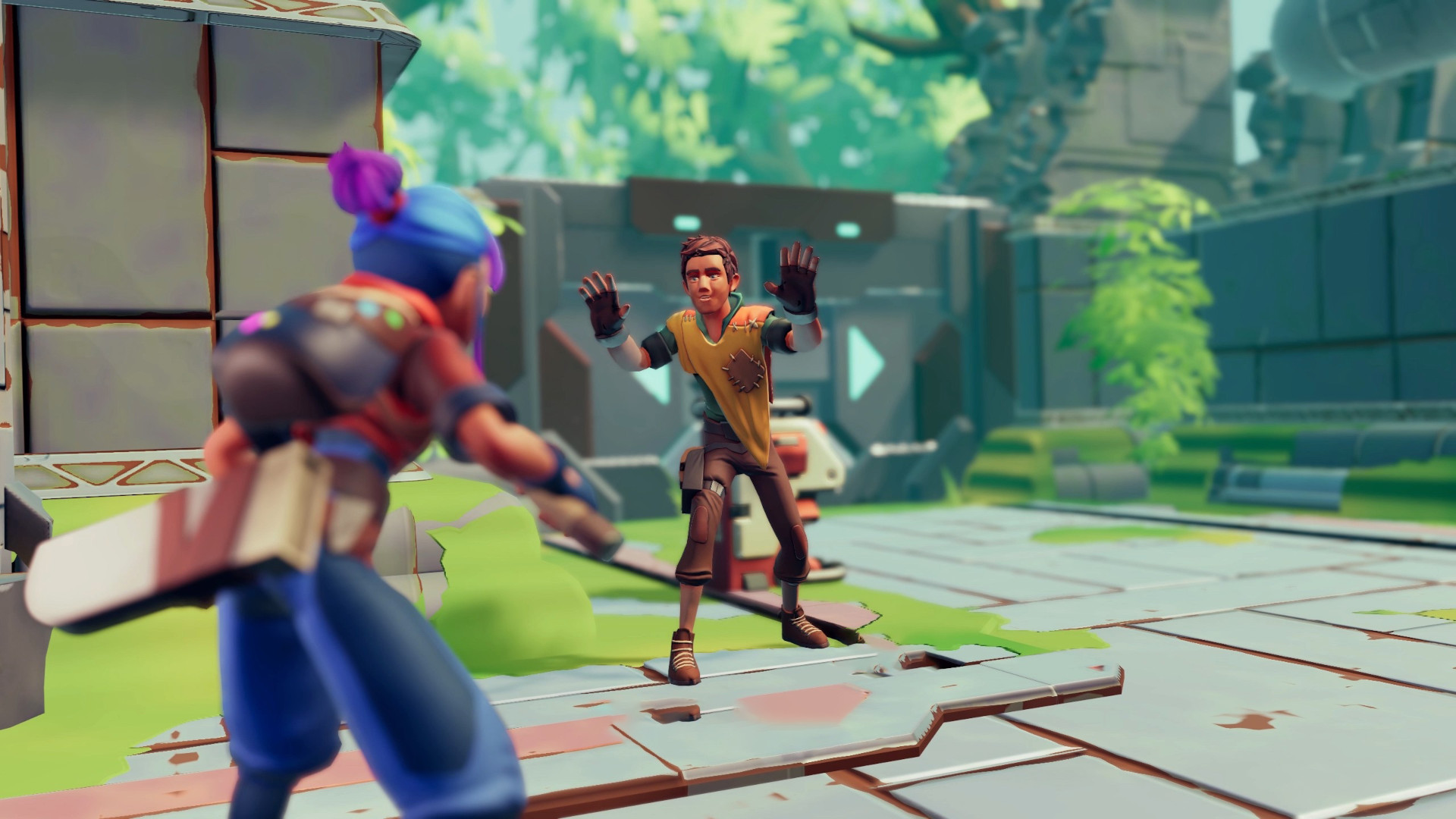