Once upon a time, ten years ago, Ubuntu was the de-facto distro used for Linux gamers. That was at the time Steam was released as a beta for said operating system. Ubuntu was the only distro that officially supported Steam. Gabe Newell had referred to this time as “a huge milestone for the development of PC gaming;” he noted Linux as being an “open, customer-friendly platform.”

Caonical chimed in on the support of Steam on Ubuntu as well. David Pitkin – director of consumer applications (at least, at the time) – said that the company is “looking forward to seeing AAA games developed with Ubuntu in mind as part of a multi-platform day and date release on Steam.”

Now, I’m not going to rehash what everybody else has said about Ubuntu in the way it has helped the average consumer make the switch from Windows to Linux many years ago. I also won’t rehash about how Canonical has, over time, gradually lost their foothold in the Linux gaming market due some of the controversial decisions they’ve made. What I will say, is I’m glad people are using a little common sense. Instead of using Ubuntu, more and more people are resorting to other distros, mostly Arch and Manjaro, at least when it comes to the gaming space.

How do I know that? That’s all thanks to Boiling Steam collecting stats from ProtonDB and analyzing the results of distros used over the course of a few years. Have a look at the chart that they made: 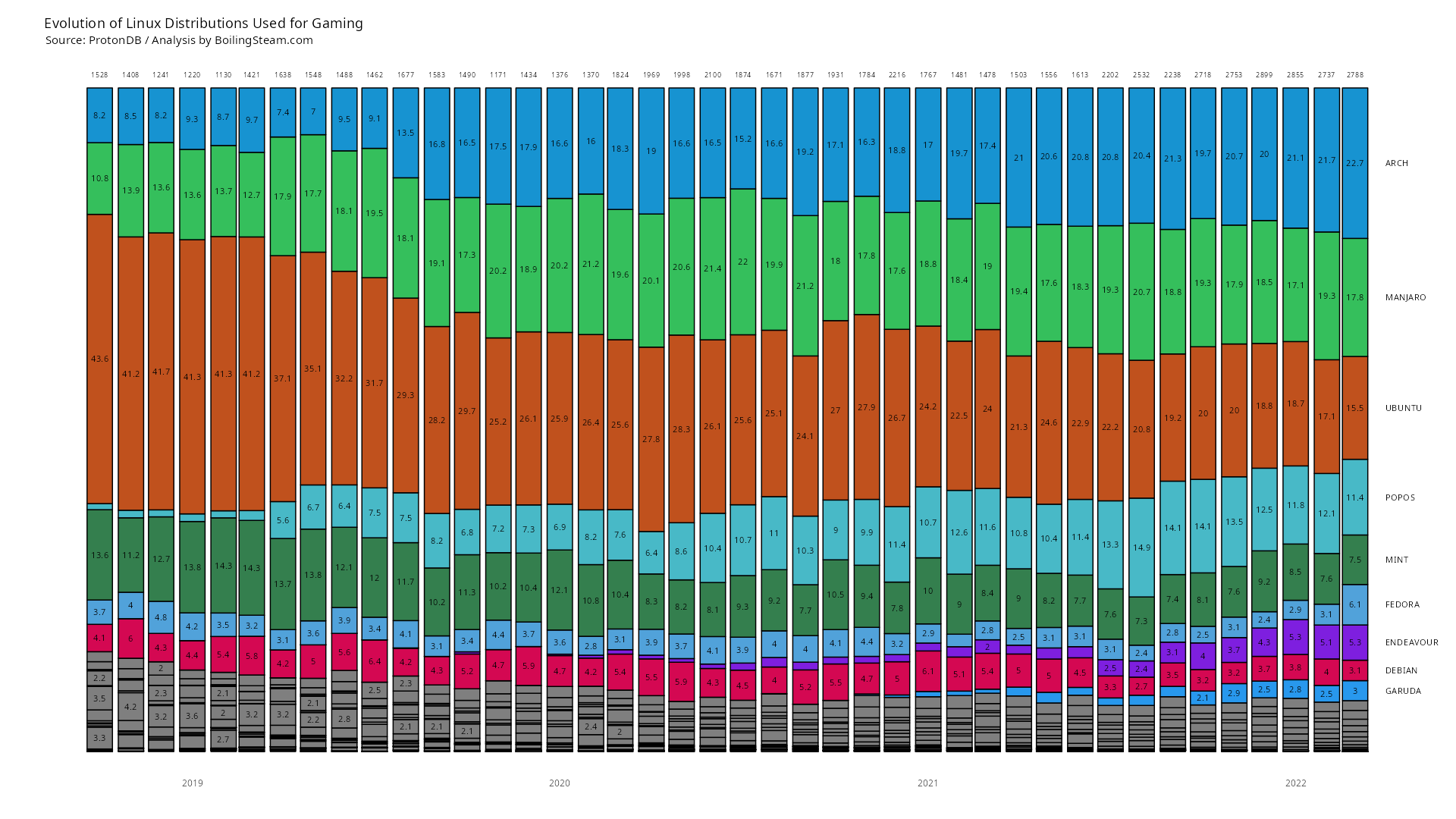 This chart explains everything. Heck, even Bryan Lunduke linked Boiling Steam’s article and chart over on his Substack and referred to the chart as being “excellent” on his podcast.

So back in 2019, nearly half the 1,528 users reporting reports on ProtonDB were using Ubuntu at 43.6%. Fast forward to today, that percentage has shrunk to a third, at 15.5%. Arch and Manjaro dominate the chart, accruing about 40% altogether. Pop!_OS has slowly gained traction over time. Mint has slowly decreased in usage.

It makes sense that Arch and Manjaro almost take the majority of the market share; gamers are going to want to have the latest, bleeding-edge packages for their system, especially when it comes to graphics drivers, and that’s what a rolling release distro serves. Meanwhile Fedora usage is gradually going up – some folks prefer to use Fedora over Arch due to having cutting-edge software rather than bleeding-edge (bleeding-edge sometimes can break things).

What will Ubuntu be like in say, three years? Will it even have 10% share? Will Canonical even care enough to do anything about it?

To those who use Ubuntu: Ubuntu does have it’s legit use cases. Even Windows has a legit case for certain software or games that simply do not run through Proton at the moment. But if you want to move away from Snaps, have more up-to-date software packages, then distros like Pop!_OS, Arch, and Fedora have your bases covered. (But it seems most of you have already taken that step, so good for you.)