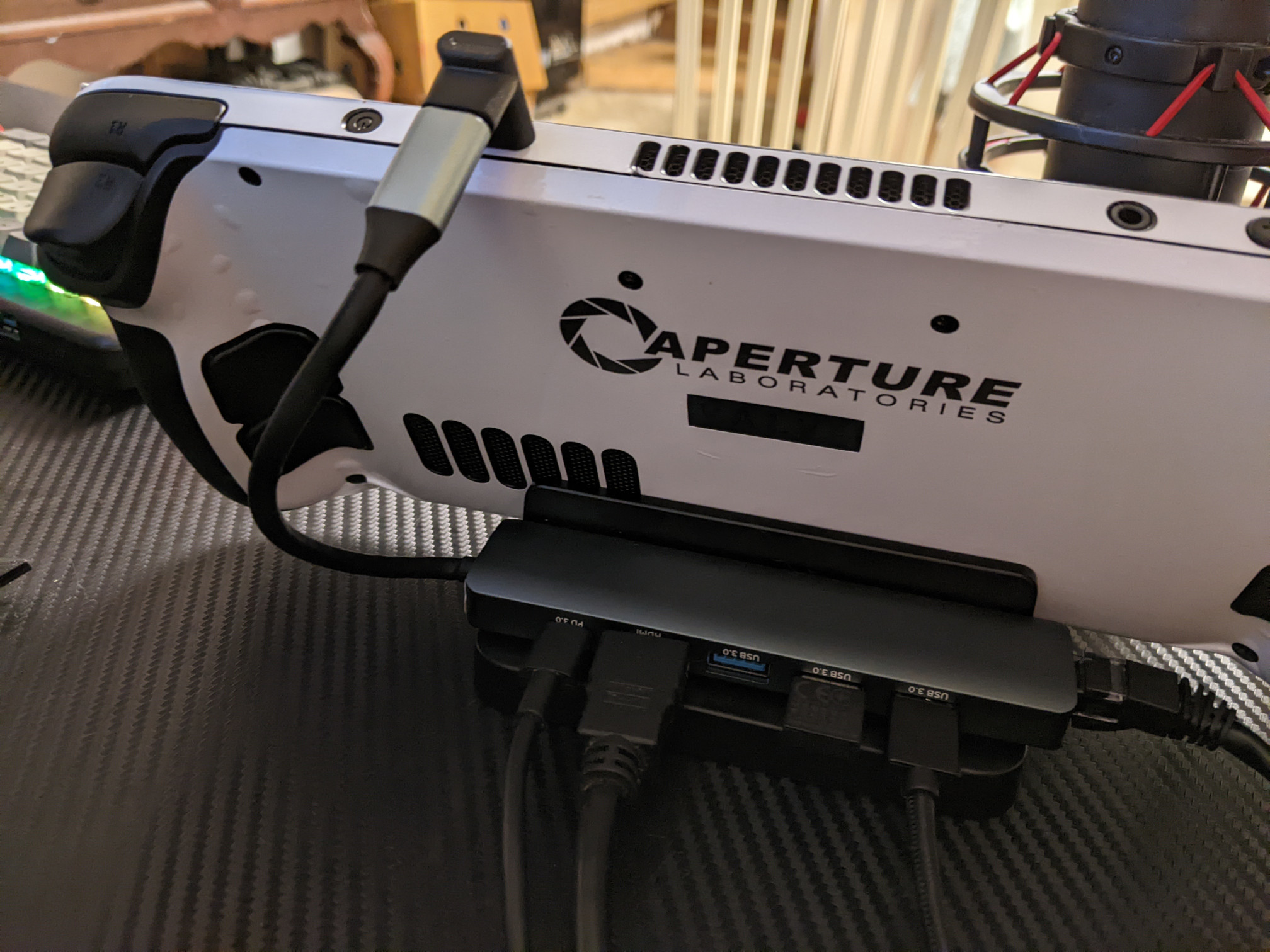 It’s nice to see third-party manufacturers come up with their own solutions ahead of the first-party release. In this case, since Valve has indefinitely delayed their docking station for the Steam Deck (and there’s still no news of it since), there’s other solutions that we can use in the meantime. I got in touch with Steve from Etsy (DeadEyeVR). Though he mostly specializes in VR products, he happens to have a Steam Deck hub available, and he was willing to send a review unit over. Here’s my thoughts on it.

The package came in a small box. Inside said box is the hub itself, tucked inside a bag of bubble wrap. Underneath that is a folded sheet of paper with the warning that some Decks could potentially become bricked when a USB-C hub is connected and instructions on what to do should that happen in your case. A link to a Reddit thread is provided where a Valve employee gave an official response on this issue. Fortunately a QR code is provided since I don’t think anyone is going to manually type in the long URL. 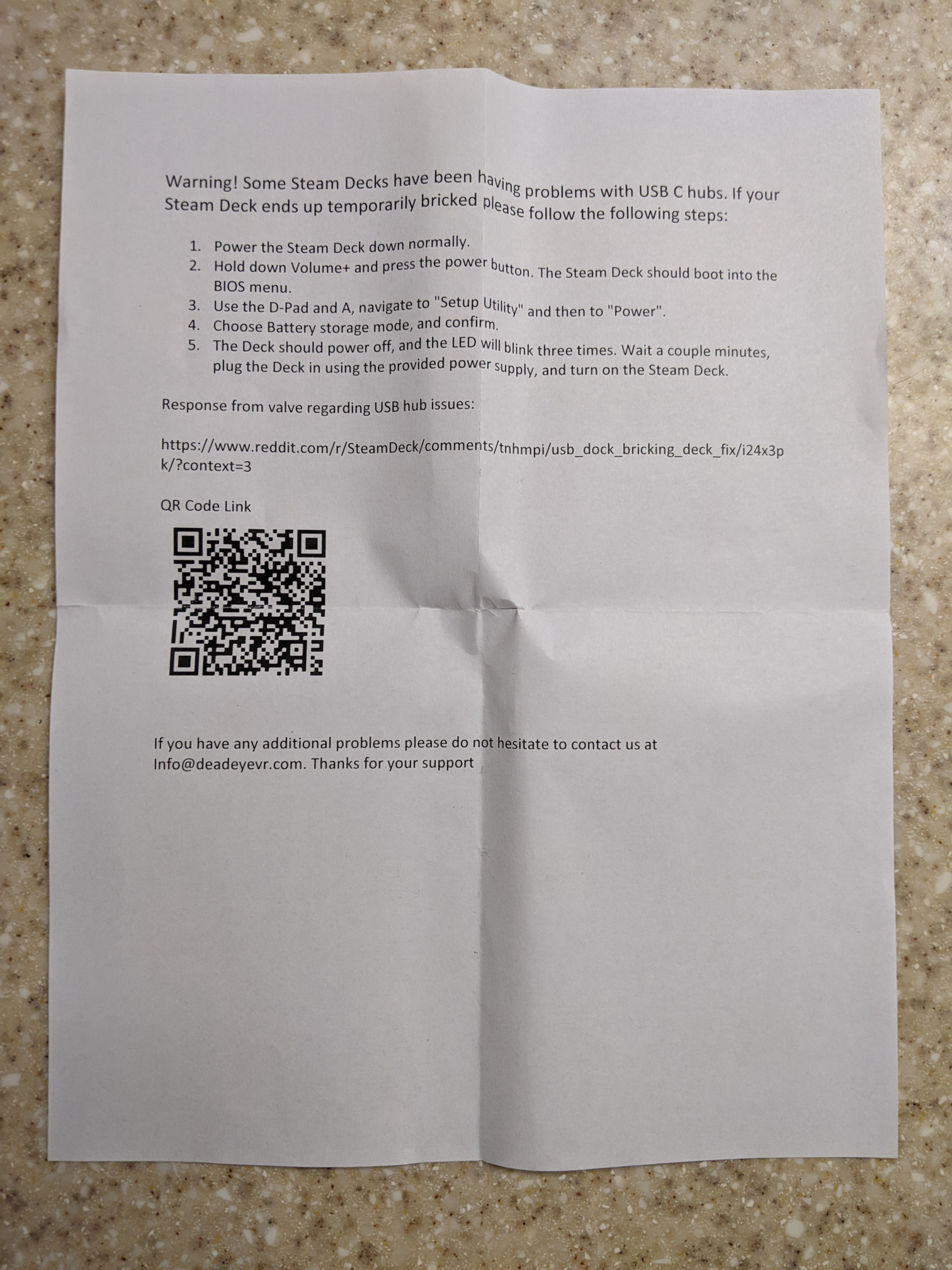 As far as the product itself is concerned, well, it’s frankly little more than a Steam Deck stand with a USB-C hub slapped on top – you can tell with the little strip of adhesive that’s sandwiched between the stand and the USB-C hub – and a 90-degree USB-C adapter is connected to the USB-C cable. Additionally the hub was put on upside-down; the labels for the ports are upside-down. But that had to be done because of where the USB-C cable is placed. I’ve also noticed the labels for some of the ports aren’t exactly even. The leftmost USB 3 port, for example, has the text almost clipping into the port itself, whereas the one on the right leaves a little bit of space.

So this is what we have for ports:

Because the USB-C hub is upside-down, you’re going to have to insert your cables upside-down as well. I would’ve liked to see the Ethernet port on the back rather than on the side, but I guess it’s better than not having an Ethernet port at all. 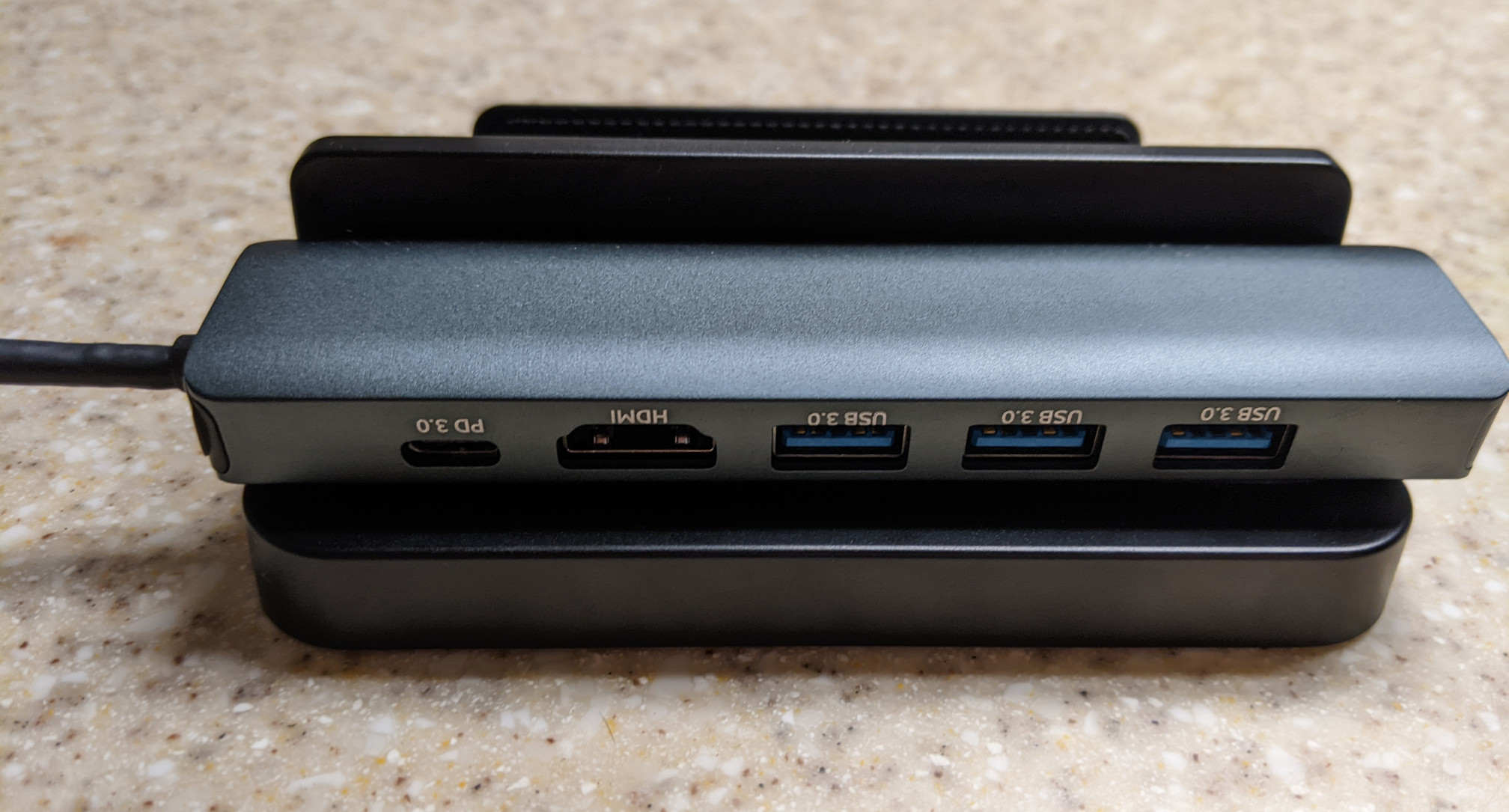 I do like the textured padding where the Deck sits. It keeps the Deck in its place and prevents it from sliding around. What I don’t like, however, is the way the USB-C cable connects to the port on the Deck. Even though you have the 90-degree connector, I feel like the cable could have been extended by half-an-inch or so. The connection is a little tight as it is. Also I would have liked to see both ends of the USB-C cable modular. The other end is permanently affixed to the USB-C hub. What’s going to happen should this cable get damaged? Then the whole USB-C hub would be worthless. If the cable was detachable, then I could just replace the cable with another one. 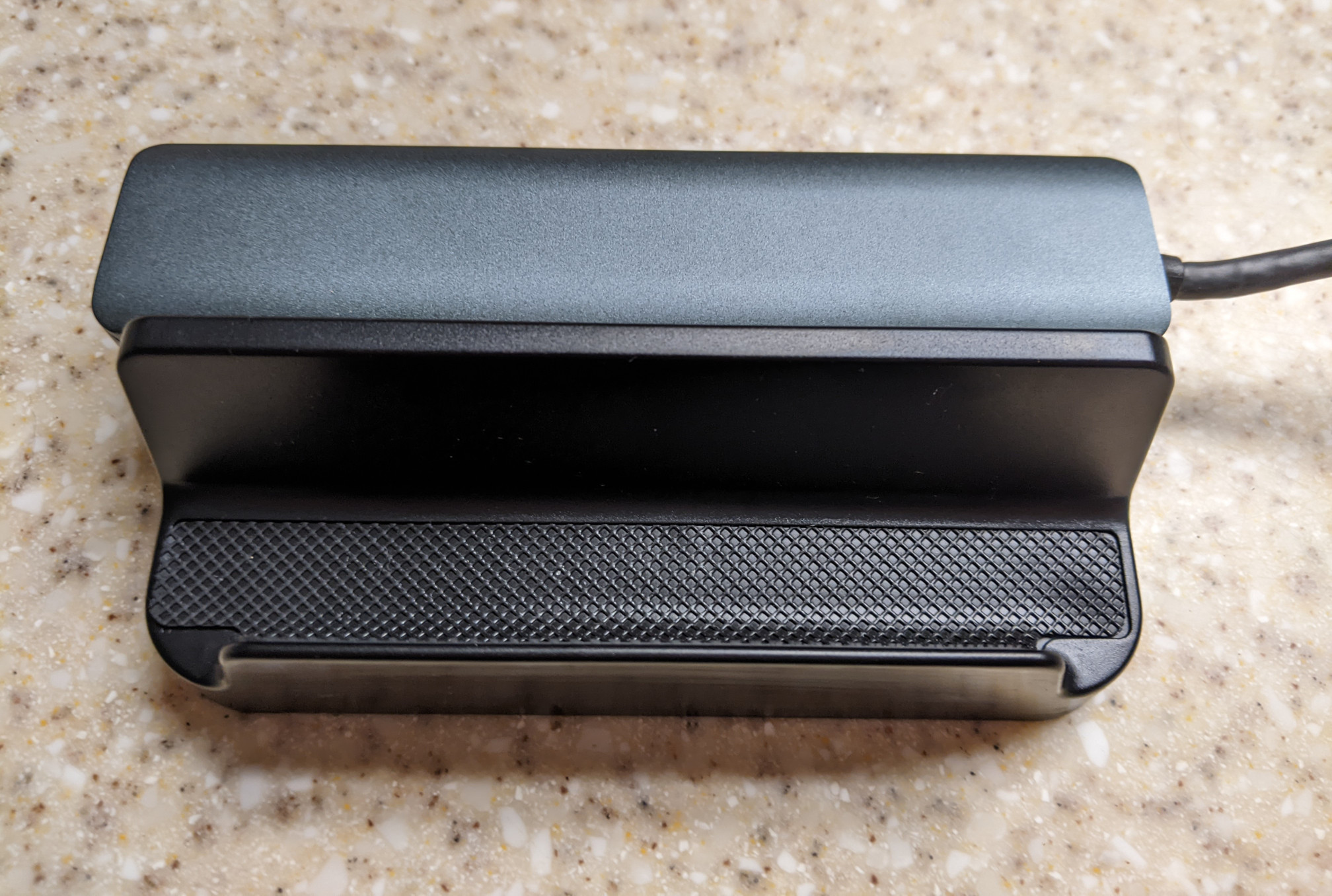 No complaints as far as the stand itself. The angle isn’t adjustable but I don’t really have a problem with how it’s set up. Maybe in a future model, there could be a way to adjust the viewing angle, in the event some don’t like the way that it is right now.

That’s pretty much all I have to say about this stand/USB-C hub hybrid. It does its job. It will hold your Deck for you, and thanks to the hub, you can dock it to an external monitor and connect up to three peripherals via the USB ports. And yes, you can play Melee online without much hassle with the included Ethernet port. But there’s quite a few quirks here as well. 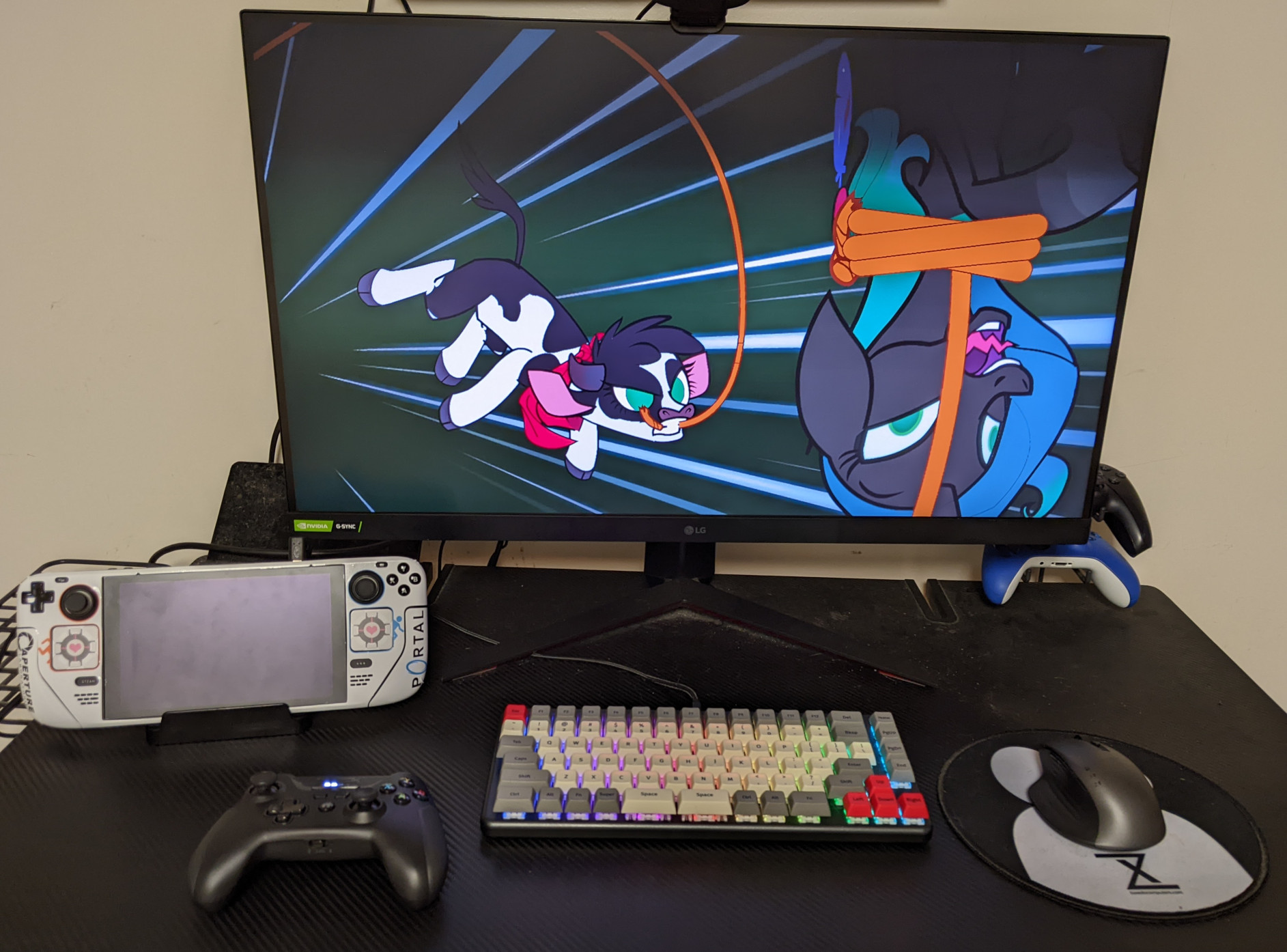 For one, the price. $54.95 is frankly way too much for two products that were slapped together. I probably could have sourced these two parts myself for less than $30 (in fact, you may be better off doing that, making your own homemade solution). If you can go without an Ethernet port, you can get a dock from Gorrzai that retains all the other ports for almost half the price, plus the ports are rightside-up and it looks like it was put together more professionally. You can get the JSAUX dock for a couple of dollars less and still have all the ports, including Ethernet, or go for their cheaper version that has one less USB type A port and is 2.0 rather than 3.0.

Next is the fact that the hub is upside-down. So isn’t the labels and the ports themselves. I get it; it had to be done because the USB-C cable wouldn’t be able to reach the port on the Deck otherwise. Maybe it would have been worth finding a different USB-C hub altogether though; it’s not exactly the most professional thing to have on display. The USB-C cable could have been a little longer too so it’s not such a tight squeeze on the Deck.

Fourth, look at the bottom of the stand: 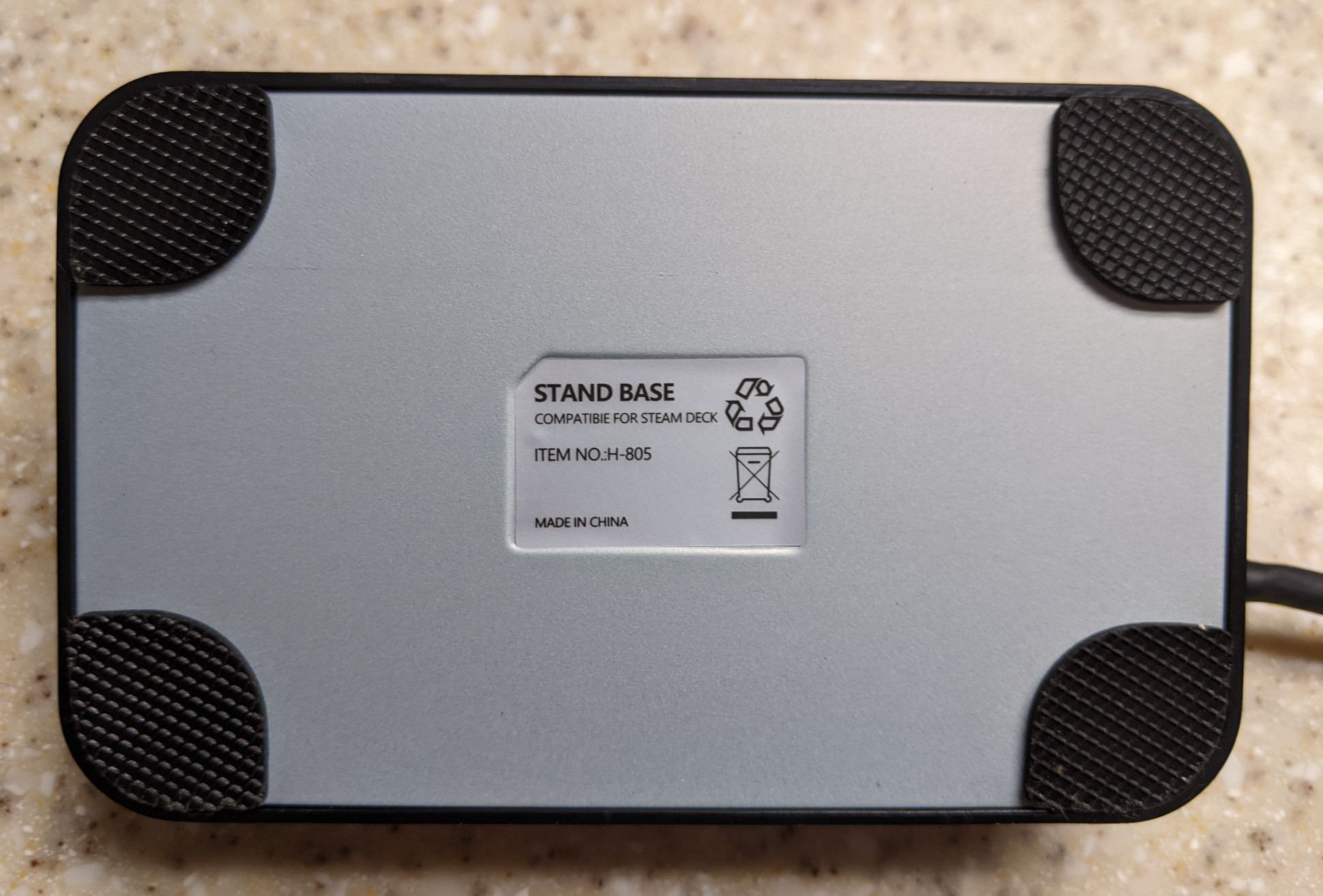 There’s clearly better Steam Deck docks out there, both in terms of your wallet and the quality of the build. Still, I want to thank Steve for sending this review unit over so I could give my honest thoughts on it.