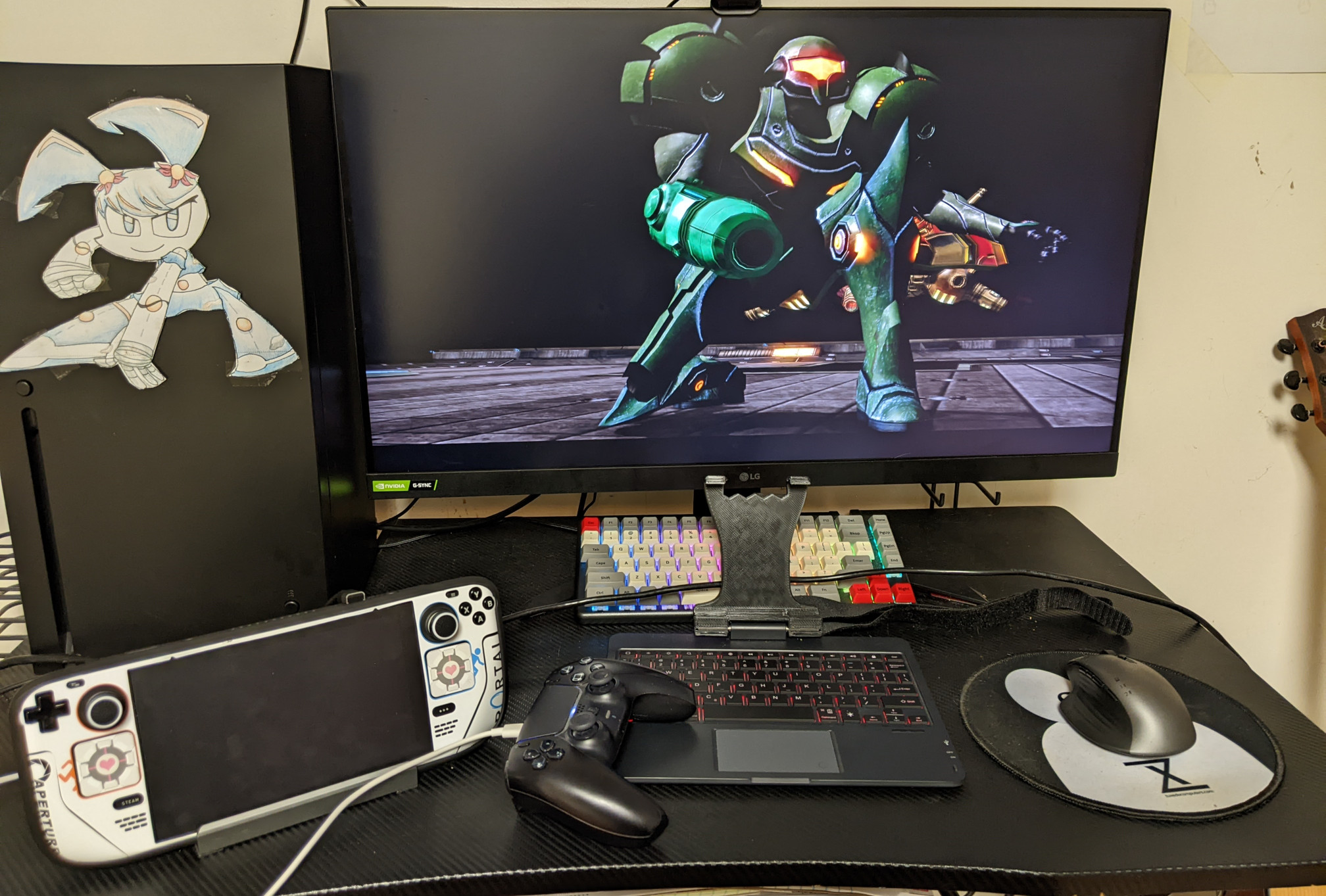 Funalot is a third-party manufacturer of Steam Deck docks and cases. They asked if I could review their dock. I was happy to oblige, and they even sent their case when I asked them to include it for review.

Essentially this review will be divided into two parts: 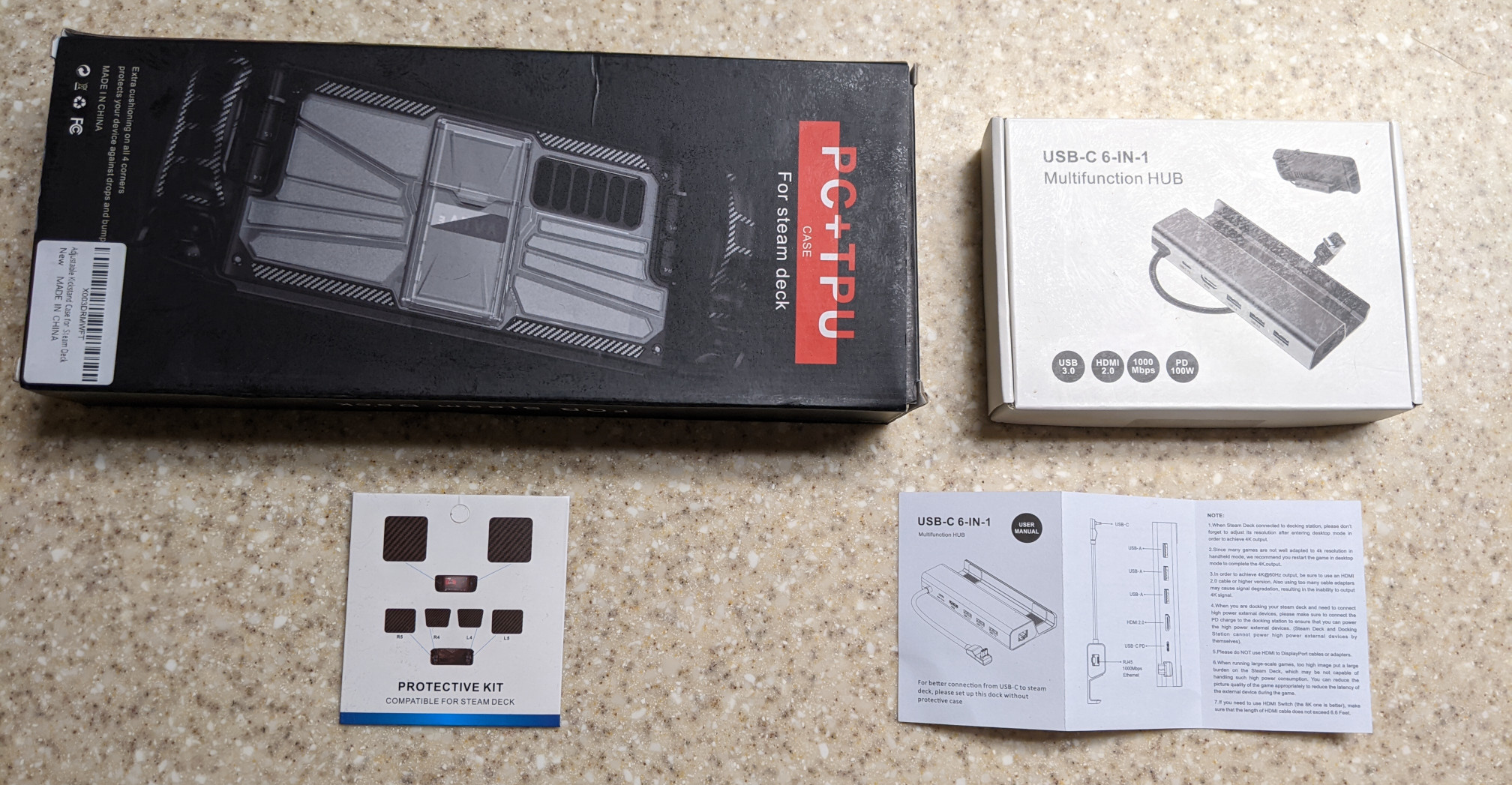 I have to give Funalot kudos for the prompt shipping. The accessories arrived at my doorstep in just two days. At first, I was impressed with the build quality of the dock. It comes in a light, minimalist, aluminum silver finish. As with many other docks out there on the market, it comes with the following ports:

Rubber cushions are provided on the bottom in each corner. Rubber pads are also provided in the crevice where the Deck will sit. Based on my testing so far, the Deck certainly will fit nice and snug into said crevice; it’s not going to go anywhere should you try to move it around. I also happen to like the angled USB-C cable that goes into the top of the Deck – it has a little ramp that perfectly shapes the Deck so that there isn’t any space that’s left unoccupied, if I’m making any sense. The fact that the dock also sort of acts like a kickstand – should you not have any other accessory for that – is a bonus, although you obviously can’t adjust the viewing angle. And the dock is low enough that it doesn’t block any of the vent holes on the back of the Deck.

As far as the ports go themselves, I’ve got no complaints there. They all work as they should – Ethernet, USB type A, USB-C, what have you. I was able to play Slippi online with my PS5 controller in 1440p glory (with Ethernet), as well as Metroid Prime Remastered without any hiccups. I’m also typing this review with the Deck while it’s docked, thanks to the DeckTop. Supposedly the dock supports 4K @60 Hz, but I haven’t tested this. I’ve seen some other reviewers complain about the Ethernet port being on the side; I don’t really have a problem with it myself. In fact, having it on the side reduces the length footprint. 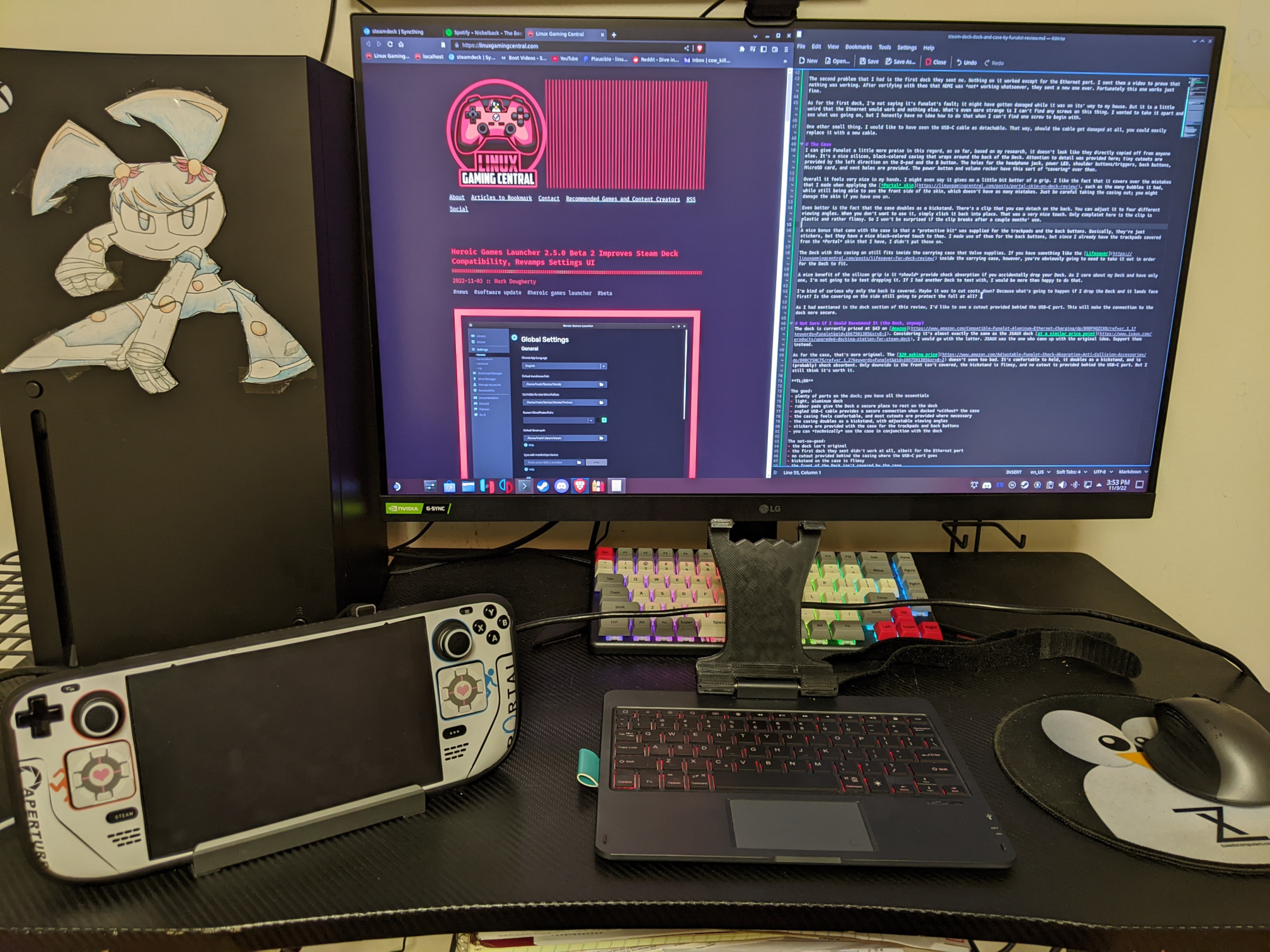 I had a little bit of a struggle getting the HDMI port to work with my external monitor. I soon discovered it’s because of the case that I have on the Deck. With the casing on, the USB-C connection is a little more delicate. I found that I could get it working by putting some pressure on the USB-C cable to make sure the connection is there. The manual for the dock recommends to not use the case because of this, so that’s my problem for having the case on in the first place.

That being said, you technically can have their casing on while the Deck is docked. Just be wary of the USB-C connection as it won’t be as secure, because the casing adds another quarter-inch or so. Maybe Funalot could offer a revised casing with part of it cut out behind the Deck’s USB-C port so the connection can be just as secure as without it.

But I’ve got two problems with it. First, this dock has little changed in comparison to the dock from JSAUX. It’s made of the same material, comes in the same color, the same rubber pads, and all of the ports are the same and in the same location. I don’t have a JSAUX dock on hand, but from what I can tell from online pictures, the only differences the Funalot dock has is: 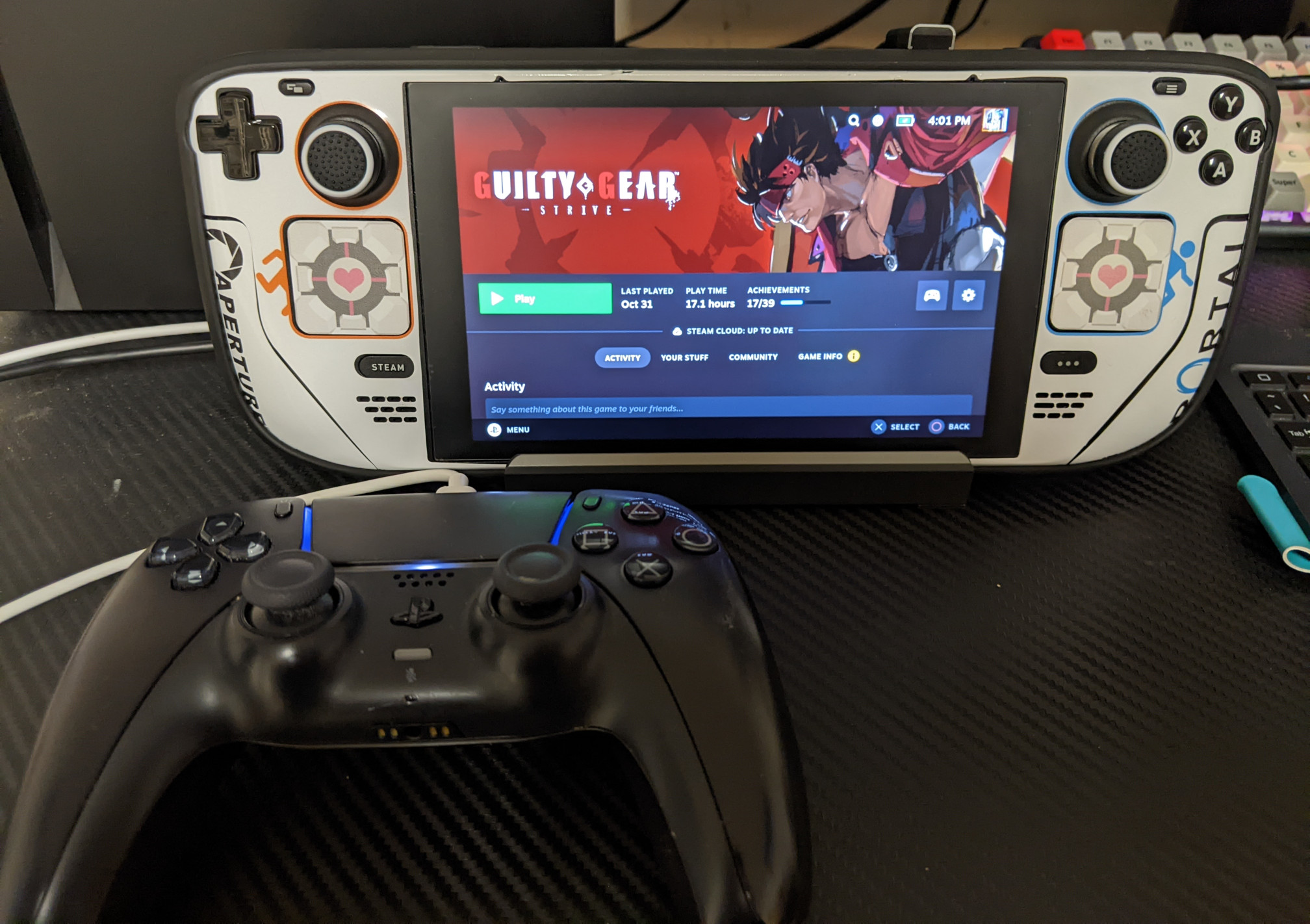 So the only advantage I see with this over the JSAUX dock is the angled USB-C connector. Otherwise, it honestly just seems like a ripoff. If they decide to make a future revision, they need to be more original. Try to make it look more unique, offer different ports, do something to make it more unique.

The second problem that I had is the first dock they sent me. Nothing on it worked except for the Ethernet port. I sent them a video to prove that nothing was working. After verifying with them that HDMI was not working whatsoever, they sent a new one over. Fortunately this one works just fine. 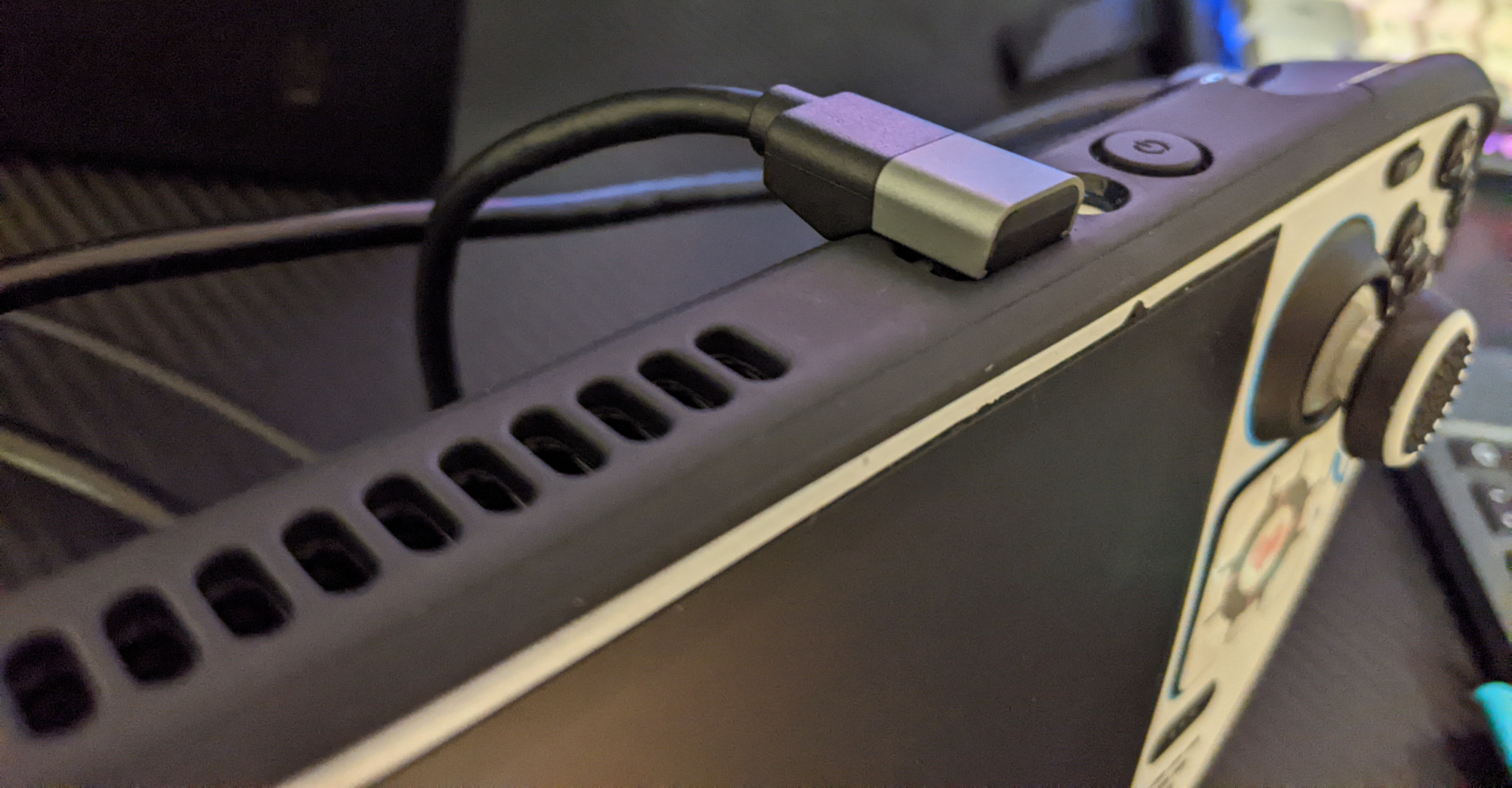 As for the first dock, I’m not saying it’s Funalot’s fault; it might have gotten damaged while it was on its' way to my house. But it is a little weird that the Etnernet would work and nothing else. What’s even more strange is I can’t find any screws on this thing. I wanted to take it apart and see what was going on, but I honestly have no idea how to do that when I can’t find one screw to begin with.

Couple of other small things. I would like to have seen the USB-C cable as detachable. That way, should the cable get damaged at all, you could easily replace it with a new cable. I also have not been able to get HDMI out to work in Game Mode; it’s only been working in Desktop Mode so far. Even when enabling External Display Safe Mode in the Developer settings, I’m not getting any picture on my external monitor. I will need to continue to test this; there’s probably some small workaround that I’m forgetting to apply. 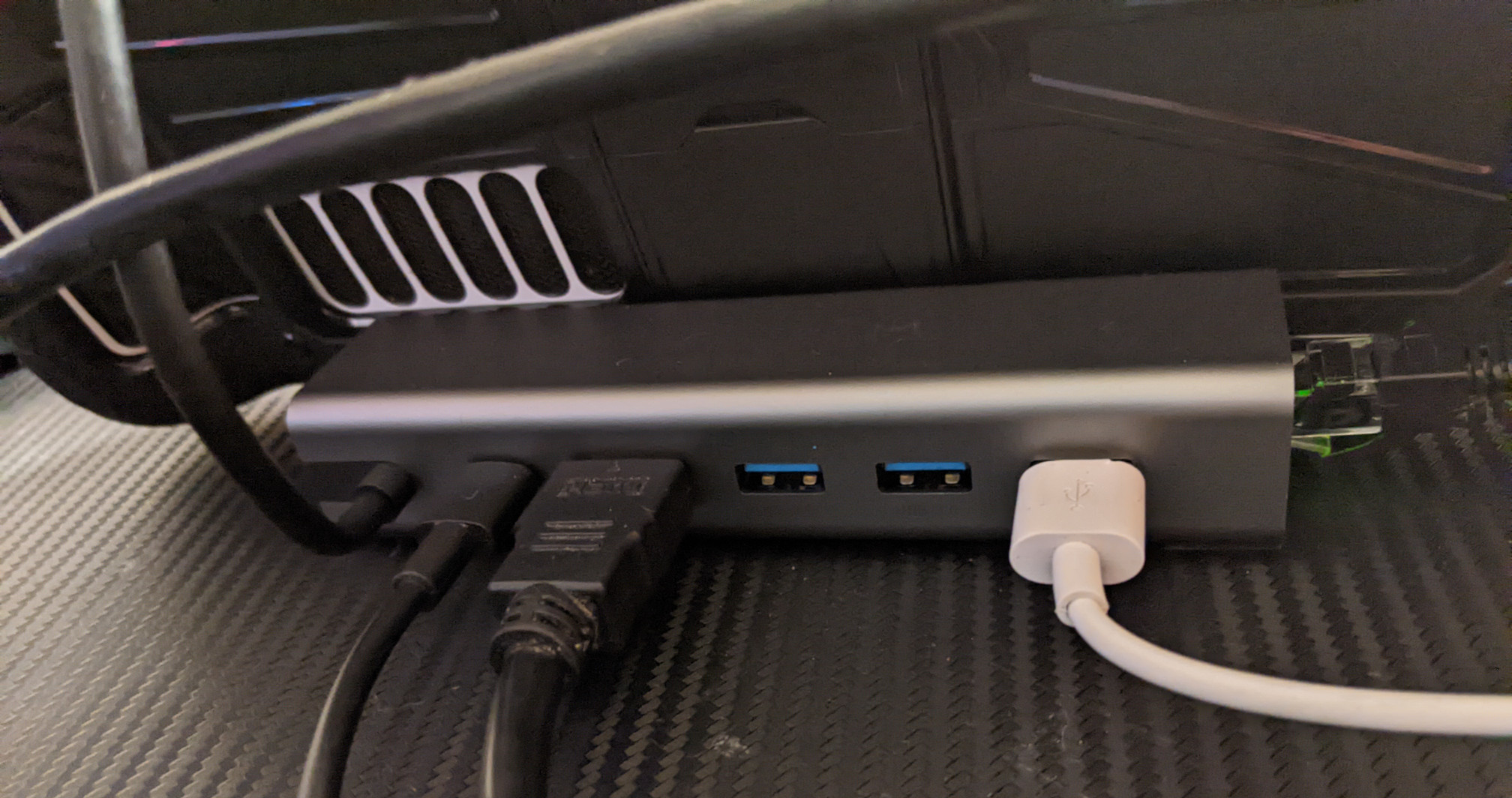 I can give Funalot a little more praise in this regard, as so far, based on my research, it doesn’t look like they directly copied off from anyone else. It’s a nice silicon, black-colored casing that wraps around the back of the Deck. Attention to detail was provided here; tiny cutouts are provided by the left direction on the D-pad and the B button. The holes for the headphone jack, power LED, shoulder buttons/triggers, back buttons, MicroSD card, and vent holes are provided. The power button and volume rocker have this sort of “covering” over them.

Overall it feels very nice in my hands. I might even say it gives me a little bit better of a grip. I like the fact that it covers over the mistakes that I made when applying the Portal skin, such as the many bubbles it had, while still being able to see the front side of the skin, which doesn’t have as many mistakes. Just be careful taking the casing out; you might damage the skin if you have one on.

Even better is the fact that the case doubles as a kickstand. There’s a clip that you can detach on the back. You can adjust it to four different viewing angles. When you don’t want to use it, simply click it back into place. That was a very nice touch. Only complaint here is the clip is plastic and rather flimsy. So I won’t be surprised if the clip breaks after a couple months' use.

A nice bonus that came with the case is that a “protective kit” was supplied for the trackpads and the back buttons. Basically, they’re just stickers, but they have a nice black-colored touch to them. I made use of them for the back buttons, but since I already have the trackpads covered from the Portal skin that I have, I didn’t put those on. 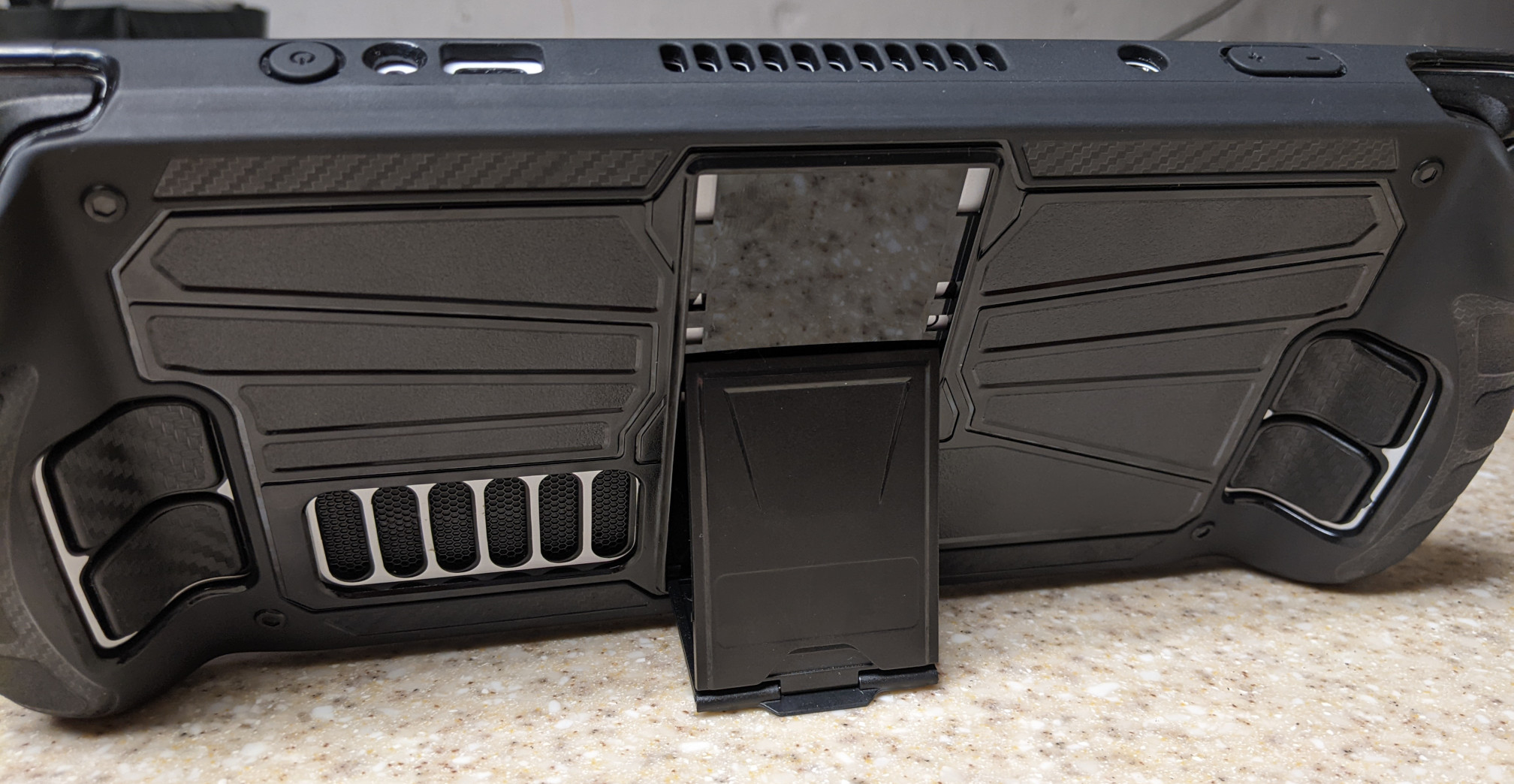 A nice benefit of the silicon grip is it should provide shock absorption if you accidentally drop your Deck. As I care about my Deck and have only one, I’m not going to be test dropping it. If I had another Deck to test with, I would be more than happy to do that.

I’m kind of curious why only the back is covered. Maybe it was to cut costs down? Because what’s going to happen if I drop the Deck and it lands face first? Is the covering on the side still going to protect the fall at all?

As I had mentioned in the dock section of this review, I’d like to see a cutout provided behind the USB-C port. This will make the connection to the dock more secure.

Not Sure if I Would Recommend It (the Dock, anyway)⌗

The dock is currently priced at $43 on Amazon. Considering it’s almost exactly the same as the JSAUX dock at a similar price point, I would go with the latter. JSAUX was the one who came up with the original idea. Support them instead.

As for the case, that’s more original. The $20 asking price doesn’t seem too bad. It’s comfortable to hold, it doubles as a kickstand, and is (probably) shock absorbent. Only downside is the front isn’t covered, the kickstand is flimsy, and no cutout is provided behind the USB-C port. But I still think it’s worth it. 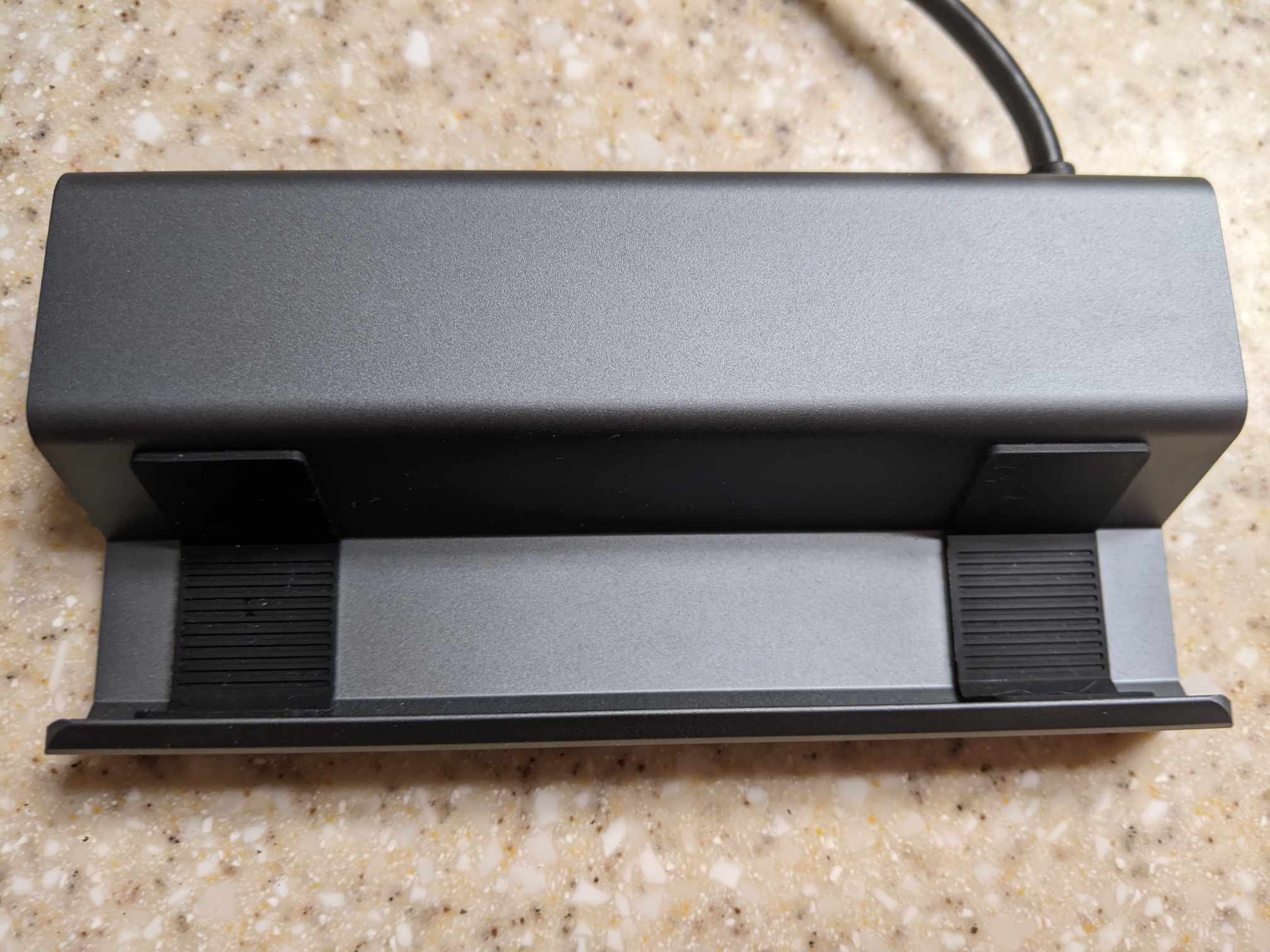