Steam Deck: How Does it Melee? 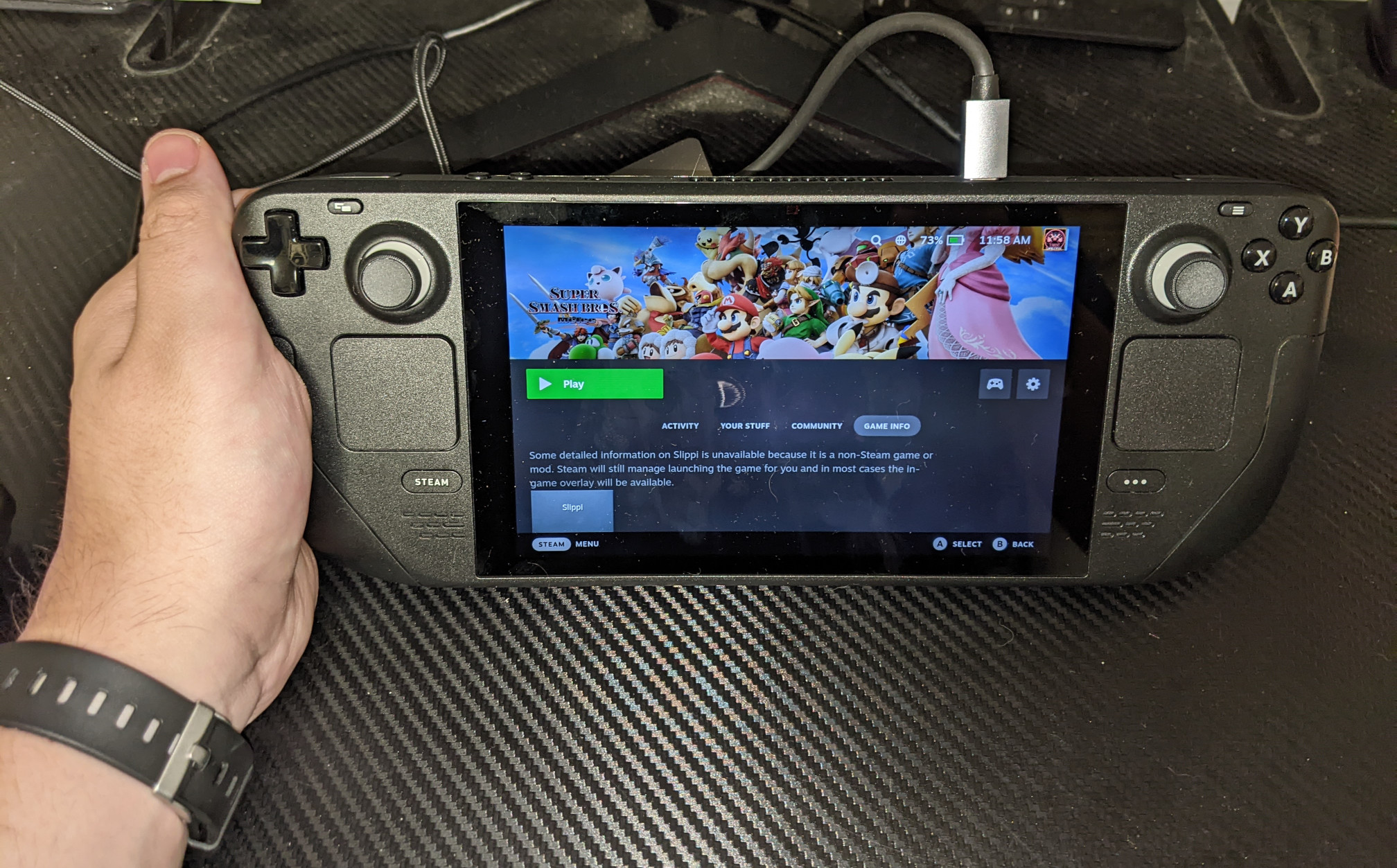 One of the first things I wanted to do after getting my Steam Deck was test Super Smash Bros. Melee. Not just to see how well it performs, but also examine online play and see how the controls feel in my hands.

If you’re looking at getting online play set up on Linux, you can refer to the guide I wrote a few months back. The Steam Deck in particular though requires a few extra steps. Slippi is still not available as a Flatpak at the time of writing this, unfortunately. EmuDeck doesn’t support Slippi just yet either. So we have to do a manual process:

Sorry if this process seems a little convoluted; I’m sure there’s an easier process for this. If you’re a Steam Deck owner and have some tips and tricks, definitely let me know.

Note that if you’re looking to play Melee offline without the intent of playing against others, all you need to do is run the EmuDeck script and place the ISO in /home/deck/Emulation/roms/gc/. The game should now be available in Steam: 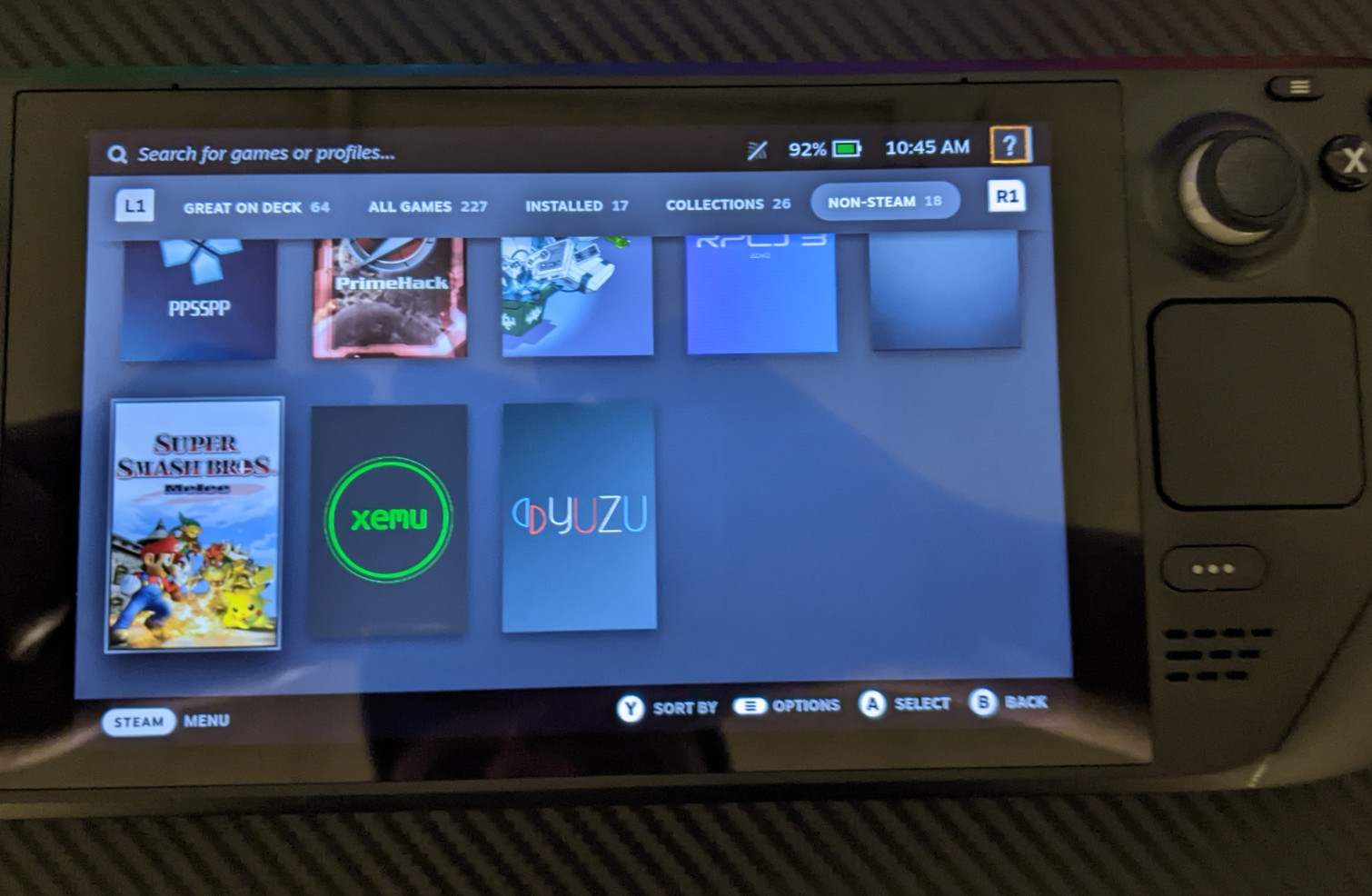 I’m sure many of you are curious as to how well Melee runs on Deck. It’s 60 FPS with the default resolution scaling (2x/720p), for the most part. There are occasional dips here and there. MangoHUD might report 60 FPS but the dip is certainly noticeable. That being said, I haven’t had any disconnects with any of the opponents that I played against, even in doubles. They were still willing to play with me after a couple of rounds. They might have a different story to report on their side though; they may have experienced rollback or poor framerates.

Just do yourself and everyone else a favor: make sure your USB-C dock has an Ethernet port and play that way. (I really wish Valve had added an Ethernet jack to the motherboard.) Don’t tell the people who I initially played with that I was using Wi-Fi.

I tried using a couple of different flavors of Melee besides the vanilla ISO: I used Animelee and Diet Melee 64. For the most stability, I’d recommend going with the latter. Animelee definitely makes the game look nice though.

The fan is quiet as a mouse while playing. Then again, I have the Huaying fan, so the Delta fans may be a different story.

Now obviously, if you put a 30 FPS cap on the game, it will just play in slow motion. So even if you were looking to play offline, thinking that you can save yourself some battery life by cutting the framerate in half, don’t do it. The game will play horribly.

How do the Deck’s Controls Feel?⌗

The million-dollar question. Normally on my desktop I use a DualSense. But when it comes to fighting games and different gamepads, there’s always a few days of adjustment to get used to. Getting used to the placement of the face buttons and the thumbsticks on the Deck certainly required some time.

After those few days had elapsed, I had no trouble with the controls. I’m able to easily L-cancel with the right trigger, and input smash attacks/aerial attacks with the right thumbstick. Wavedashing isn’t that difficult to achieve either. Give me a few more days and I can probably play just as well on Deck as with my PS5 controller. I have configured the back buttons to use shield and grab, but I don’t really make any use of them. I can’t comment much on the D-pad either, since all I use that for is taunting (for humor, of course, such as if I KO my teammate by accident).

There are occasions where my palm accidentally presses against the right trackpad, which, by default with Steam Input, acts as the C-Stick. I inadvertently put in a back air attack when I might have planned on doing something else. It’s not that big of a deal though, and I can easily disable the right trackpad by configuring the Steam Input. (The left trackpad mimics the D-pad by default.) 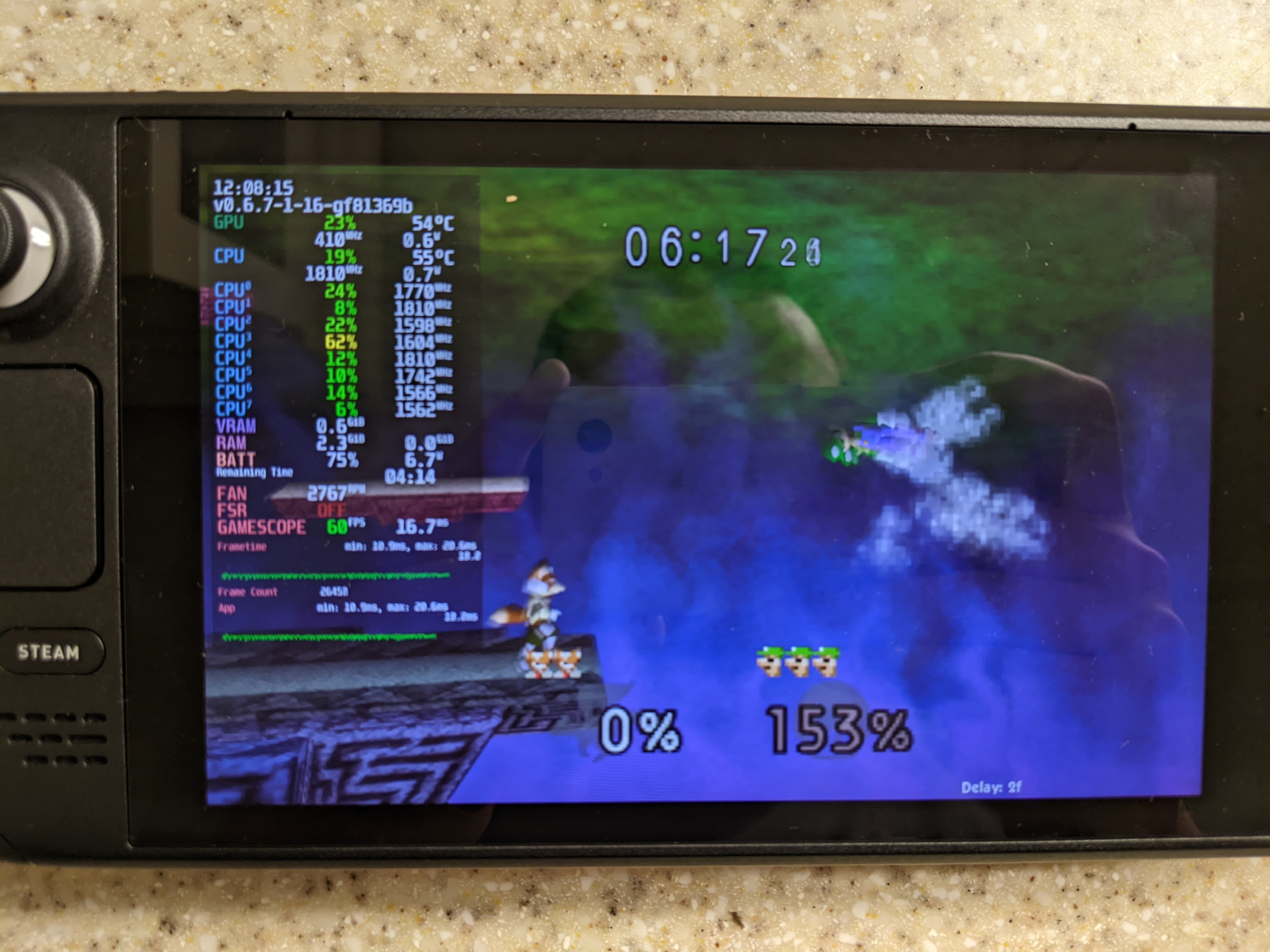 I played this game in bed, and I will admit my hands started to feel numb after an hour or two of gameplay. That’s because my arms are resting on the mattress. If I held the Deck up I probably wouldn’t get that problem, but you have to keep in mind the Deck has it’s weight to it, so you’re probably going to feel discomfort no matter what after a few hours.

I should also note the buttons and overall ergonomics of the Deck feel way better than the stock joycons on the Switch. The face buttons aren’t flat, the thumbsticks feel pretty decent and are larger, and there’s analog triggers. The rounded grips on the left and right also help make the Deck feel better in my hands.

All of this being said, the Deck is a PC; if you want to use other gamepads, whether through Bluetooth or you have a Mayflash adapter for your wired GameCube controller, that’s totally an option.

Surprisingly I haven’t noticed much of a difference in battery consumption between vanilla Melee, Animelee, and Diet Melee 64. They all consume from somewhere at 7 watts to a minimum, and 10 at most. Diet Melee, of course, is going to have the greatest benefit here, but even then it’s only a watt or two difference than with Animelee.

If we divide the Wh battery life of the Deck – which is 40 Wh – with these numbers, we can assume we’ll get 4 hours at worst. I think it’s safe to say you can probably squeeze 5, maybe even 6 hours of battery life. Of course, this is all going to depend on whether Wi-Fi/Bluetooth is enabled or disabled, the screen brightness, etc. You could probably sneek in another half-hour or so by lowering the internal resolution (the graphics won’t upscale when FSR is enabled, though).

I really wish I could record myself playing Melee on Deck, but I don’t know what happened to my tripod and I currently have no decent way of showing the camera, other than using my hand. I ordered a new tripod and should be expecting it tomorrow or Thursday. That way, you can actually see what it’s like playing Melee with an oversized Switch Pro. But once I get my tripod I’ll definitely have some footage if you’d rather see this in action rather than just reading a large text post.

I’m grateful for the Deck’s slightly larger screen in contrast to my Switch (7" as opposed to 6.2"). But at times I still have difficulty seeing everyone on screen while playing doubles (I especially have this problem when playing Smash Ultimate on my Switch in portable mode). If you find the screen to be too small, just dock the Deck and connect an external monitor. 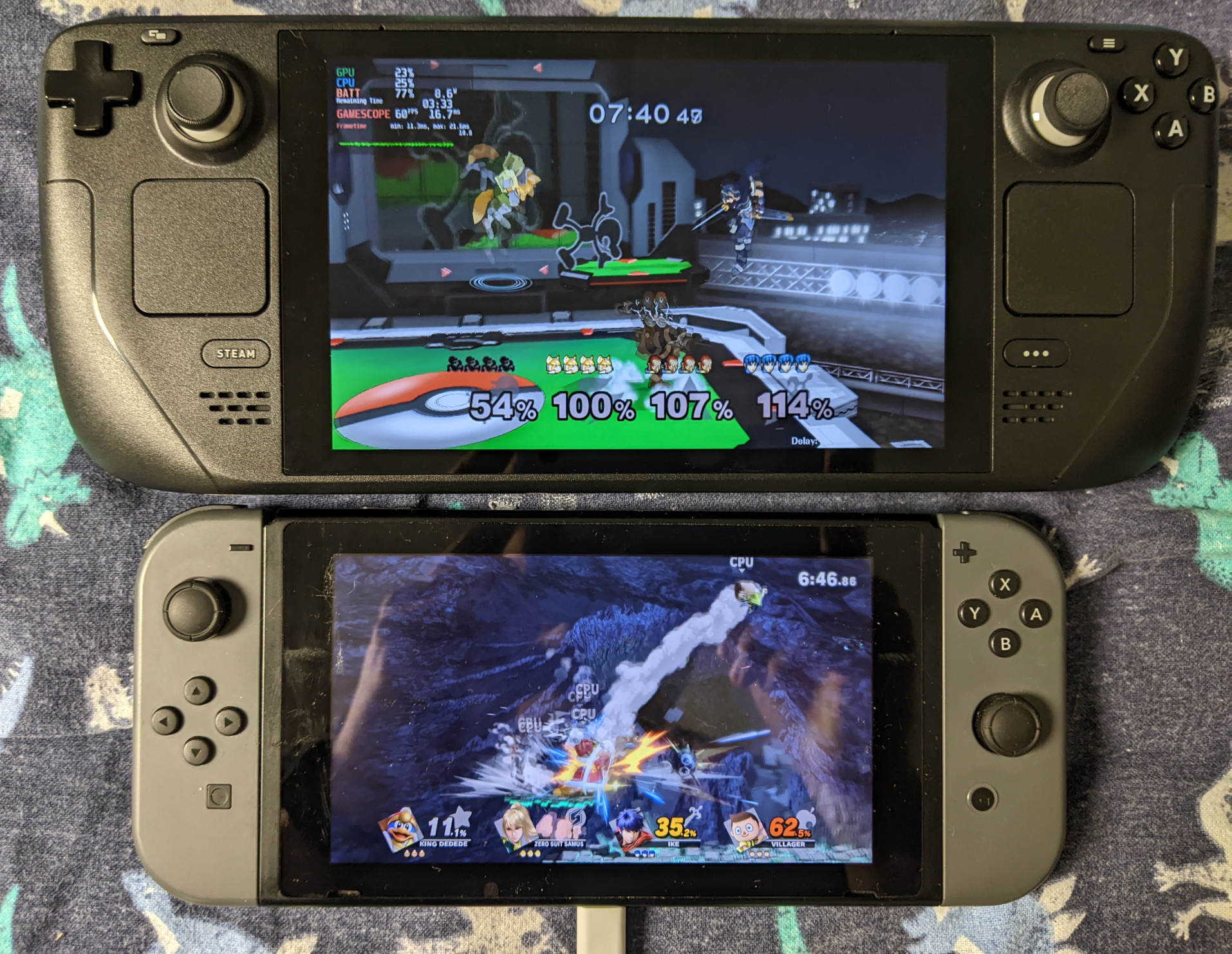 I’ve noticed Steam’s on-screen keyboard randomly pops up while playing. Not sure what’s causing that, and it’s a nuisance. It only appears in the game’s menus though.

Read other posts
← Metroid Prime Trilogy on Deck: A Match Made in Heaven Lower Fan Noise and GPU Temperature on Deck with Heatsink/Fan (But I Don't Recommend It) →