Sonority - You Got the Flute of Time!

Sonority. According to the Merriam Webster dictionary, one of the definitions of the word is as follows:

The perceptibility or distinctness of speech sounds when spoken in a context in which stress, pitch, and sound duration are constant.

It could also be interpreted as the state of being sonorous, as in producing sound, full or loud in sound.

I don’t blame you if you’re a little confused as to what “sonority” or “sonorous” means. But that’s the literal name of the game, for which I am reviewing. In Sonority you play as Esther. She’s apparently on a journey to assist a friend. But along the way she comes across ruins. Some pathways are blocked. The only way she can move forward is with the power of her flute. By solving puzzles with said instrument, she can move pillars up or down, or rotate them. Depending on the note played, the pillar will move up or down. You will therefore need to figure out what note to play on a particular stone, and then raise or lower the octave on the next stone. Figuring out the right notes to play will allow Esther to proceed further in the game.

I have to say, this is a really neat concept. You kind of get the idea of how music notation works. You’re not necessarily learning how to play a tune; you’re just figuring out what the right note is for a particular stone, then hoping that it worked out after Esther steps on the ground.

Puzzles get a little more difficult the further you get into the game. More notes become available to play to increase the sophistication of the puzzles. Along the way, Esther comes across a talking racoon. Though he is a bit cryptic, the racoon and Esther can understand each other and communitate along her journey. Esther will also come across stones with eyeballs that will stalk her every move. Yeah, it’s kind of odd. But still an interesting puzzle game. I have come across a few issues. For example, depending on where Esther is located, the game can softlock. Since there’s no jumping in this game, if she walks onto a platform lower than what she’s already at, she might not be able to get herself back up, forcing the user to restart the game.

To my knowledge, there’s no “Apply” button when configuring the graphics settings in the main menu. So if you decide to change the resolution, for instance, it won’t apply when you start a game.

There’s also the oddball issue (although I think it got fixed with a recent patch) where in the middle of a cutscene, Esther can still play notes and tap her foot out of nowhere. This also happens when pausing the game and navigating through the options; pressing Down on the D-pad for example will still cause her to play the F note. Other than that, the game is really well optimized. You can clock the TDP all the way down to 6 W at Ultra settings with the Deck’s native resolution and still get a solid 60 FPS. You can step it down a notch to 5 W if you want 40 FPS, and 4 W for 30 FPS. 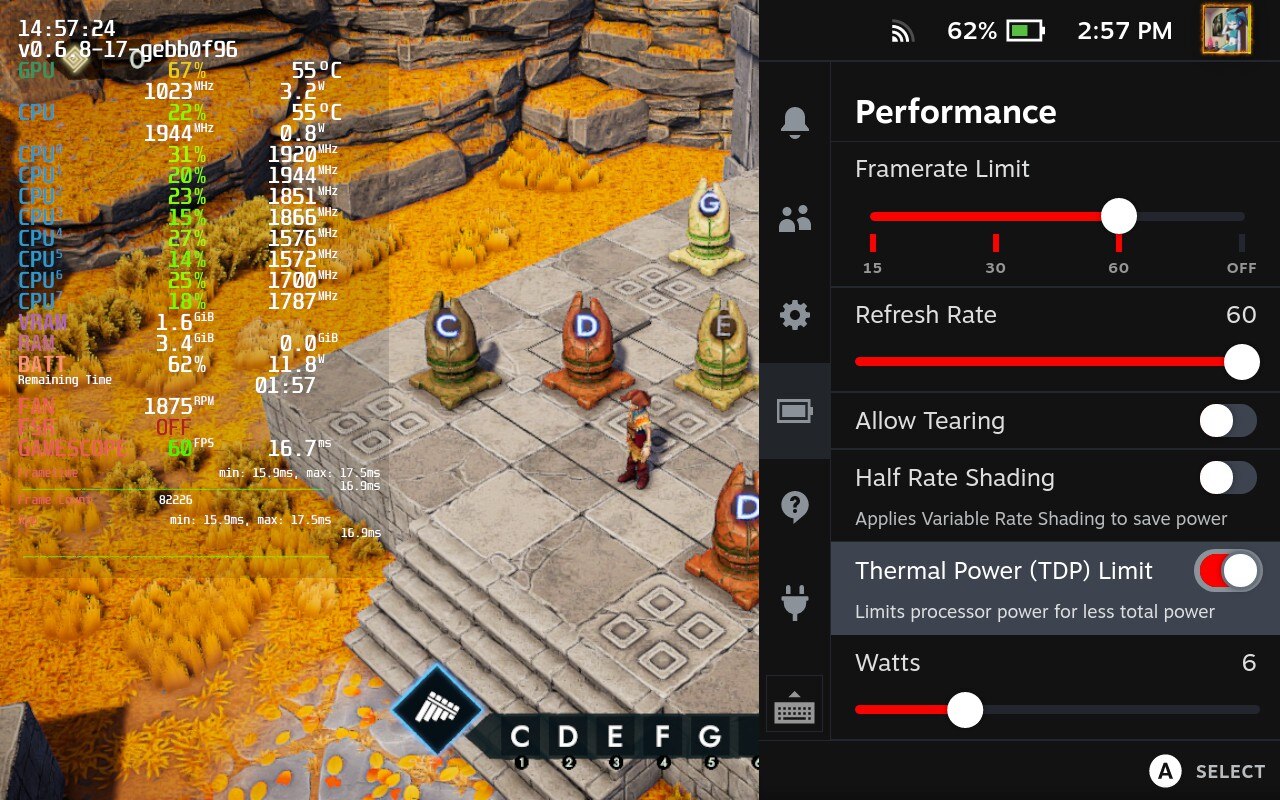 Oh, and a nice bonus: the game is native to Linux. It might be using Unity as the engine, but it actually uses Vulkan as the backend rather than the archaic OpenGL that older versions of Unity were using.

Admittedly I haven’t spent too much time with Sonority (two hours). But I did enjoy it while I played it. I might have learned a thing or two about how musical notation works as well. It’s one of those games where you’re going to have to put your thinking cap on in order to proceed, but if that’s something you like, it wouldn’t be a bad idea to pick this up. According to HLTB, the main story takes about five hours to finish.

Disclosure: I received a free review copy of this product from Keymailer.