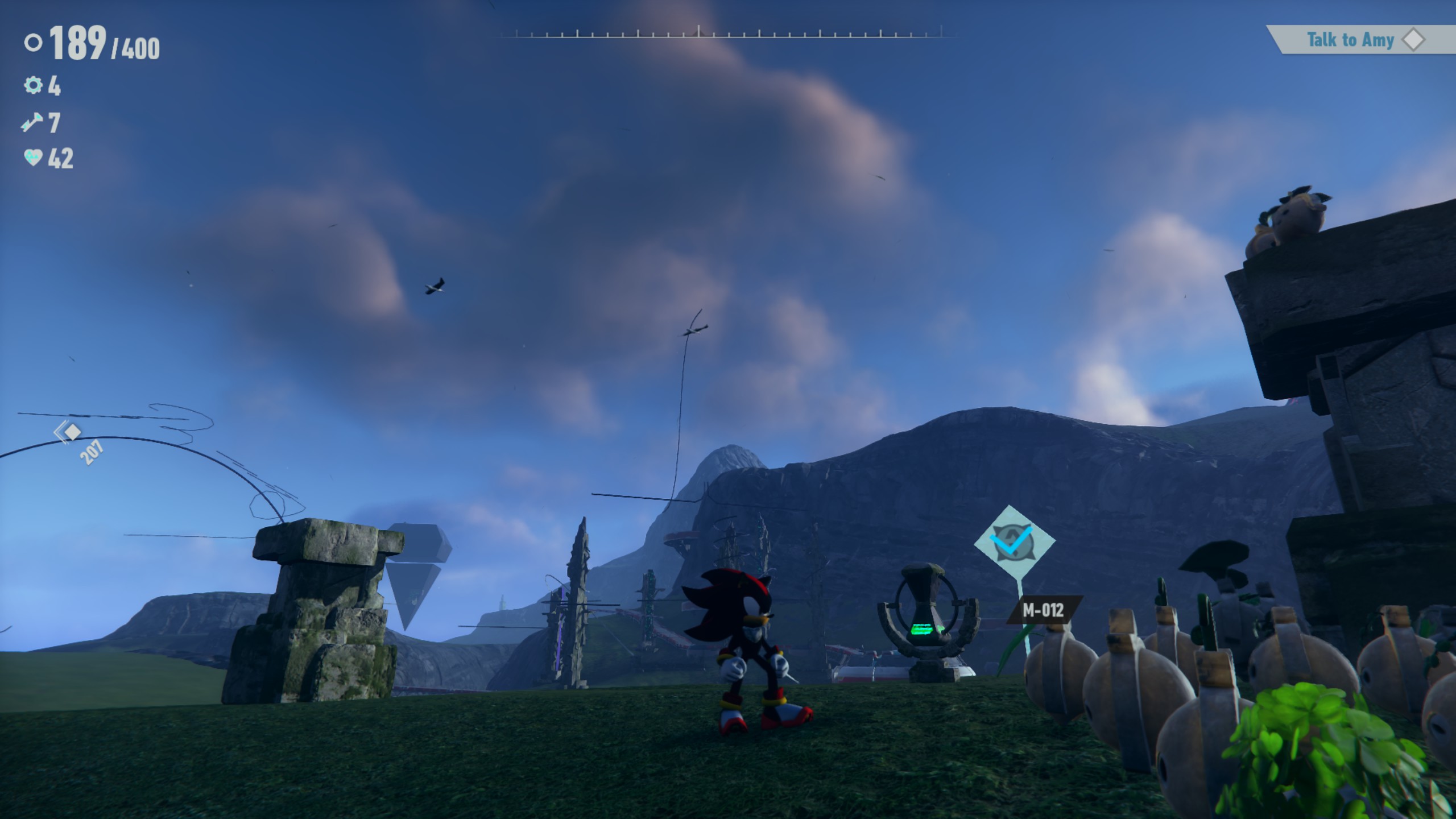 Sonic Frontiers may have an “Overwhelmingly Positive” rating on Steam, but there are quite a few things we can do to make the gameplay experience even better. Such as:

With all these mods you could practically get a fresh new session in after beating the game. So let’s go over how to get mods running. This guide will cover both Linux desktop as well as the Steam Deck.

As always, small disclaimer that I’m not responsible if the Denuvo DRM triggers while you’re doing this. So far I haven’t had any issues, but I needed to throw that out there. 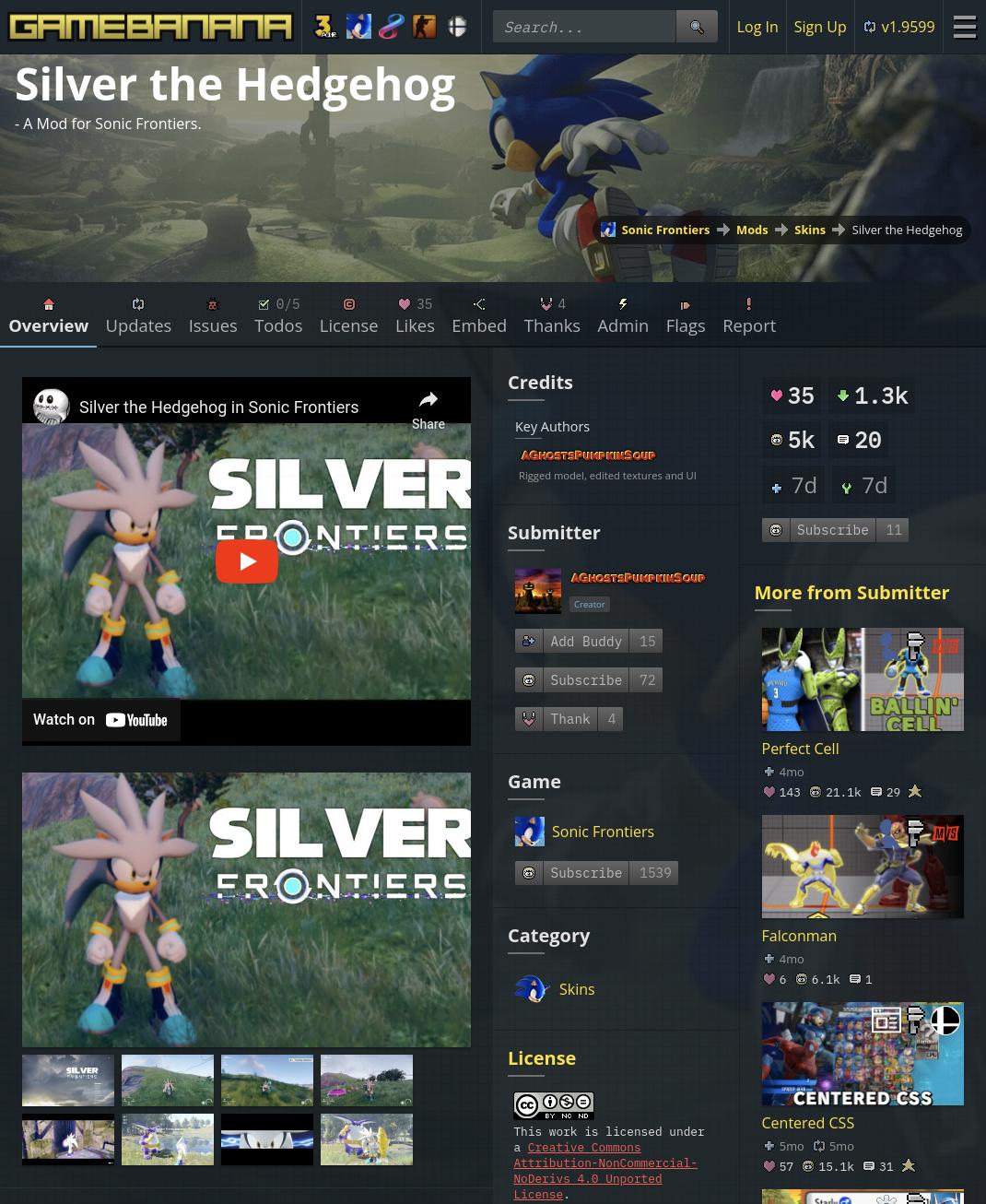 To mod Sonic Frontiers on Linux, we’ll need to use Hedge Mod Manager (HMM). This tool allows us to mod any game that uses the Hedgehog Engine, which is what Sonic Frontiers uses. Because it’s only available on Windows, we have to use Wine to run it. SteamTinkerLaunch (STL) makes this easy for us. If you’re not aware of STL, it’s basically the Swiss army knife when it comes to managing Windows-based games on Linux. See the article from Boiling Steam for more info.

On Steam Deck, download the latest commit from the main GitHub page, clicking the green “Code” button, then selecting “Download ZIP”. Extract the zip file somewhere convenient. Open a terminal in the same location where the STL executable is located.

Run this to add STL as a compatibility tool in Steam (this step is optional; useful if you want to use STL for games outside of Sonic Frontiers): 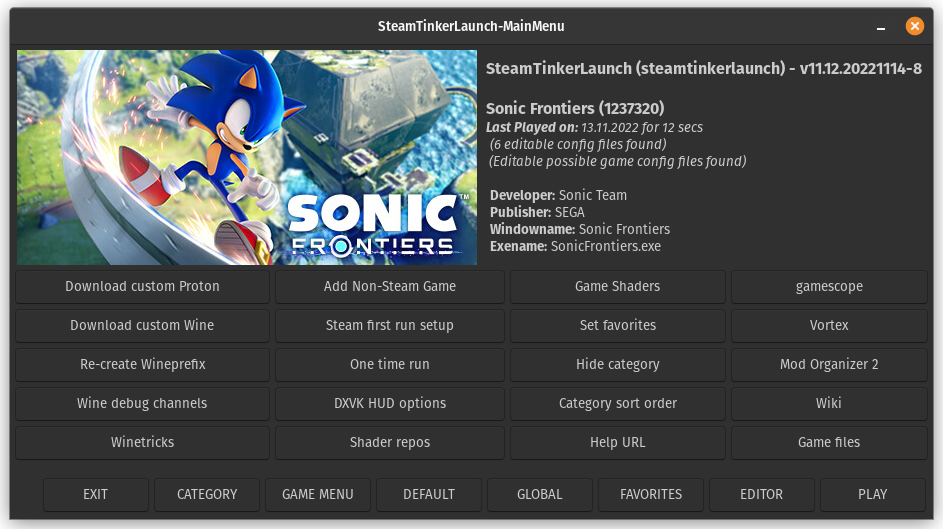 If you’re on desktop, make sure Winetricks is installed. Installing this is dependent on the distro you’re using. Note that STL may have installed this for you already. Check your Winetricks version with:

If you don’t have this version, update to the latest one with:

Note that if you’re on Deck, this step isn’t necessary; STL downloads and installs Winetricks for any app that needs it.

Once STL is installed and you have the latest version of Winetricks installed, you can download and run HMM with:

You will need to use the nightly release; the latest stable release at the time of writing this does not support Sonic Frontiers. This will take quite a while; up to 10 minutes when run for the first time.

If everything went well HMM should open up: 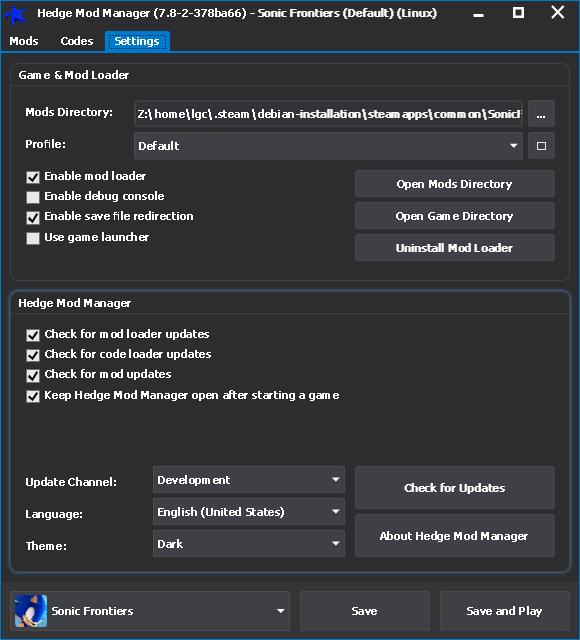 Here’s some codes that I would recommend enabling:

I’m noticing that just about every day there’s a new code that gets added – you may see a button that says, “Update Community Codes”. Click this to get more codes. After you’re done checking off codes, click “Save” to save your changes. 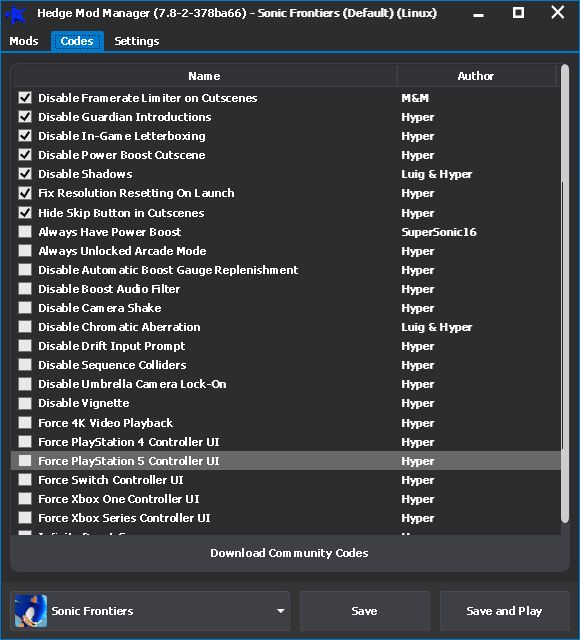 For mods, we’ll have to download them. You can find most of these over on GameBanana. Supposedly the one-click install button works for the maintainer of STL, but it doesn’t work in my case. So pick a mod, and manually download it. Some mods I’d recommend:

Of course, should you want to change Sonic’s model, you can do that as well, from Silver to Minecraft Sonic to Amy to Blaze to Excalibur and everything in-between. You may even want to try out a low-poly model if it helps at all with your framerate.

After mods have been downloaded, extract them to a convenient location. With HMM still open, go to the Mods tab. Click “Add Mod”. Select “Installing from a folder” and click OK. 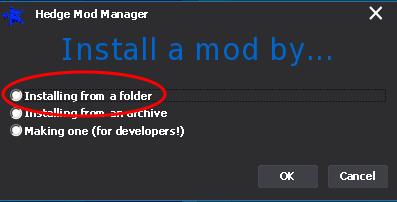 Wine’s file manager will open. Select “/” to select your Linux drive. In my case I have mods placed in:

Select “Open”. The mods list should now be populated in HMM. There should also be a Mods folder inside of the game’s install directory with all the mods you just added. 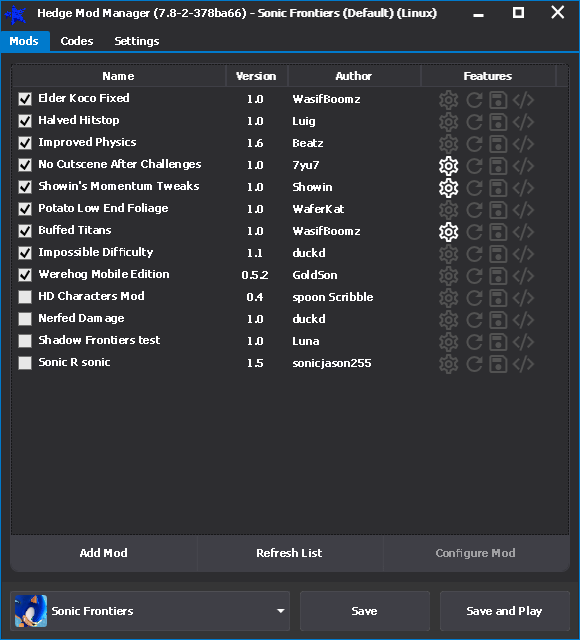 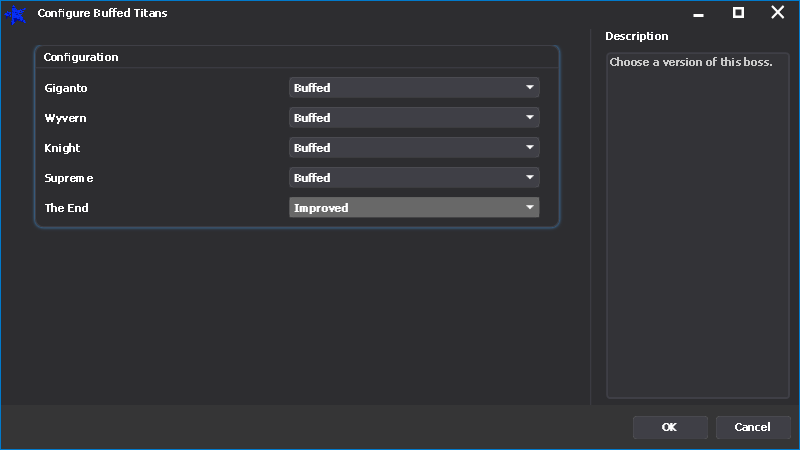 Once you’re done checking off your mods, click “Save”.

5. See Your Mods in Action⌗ 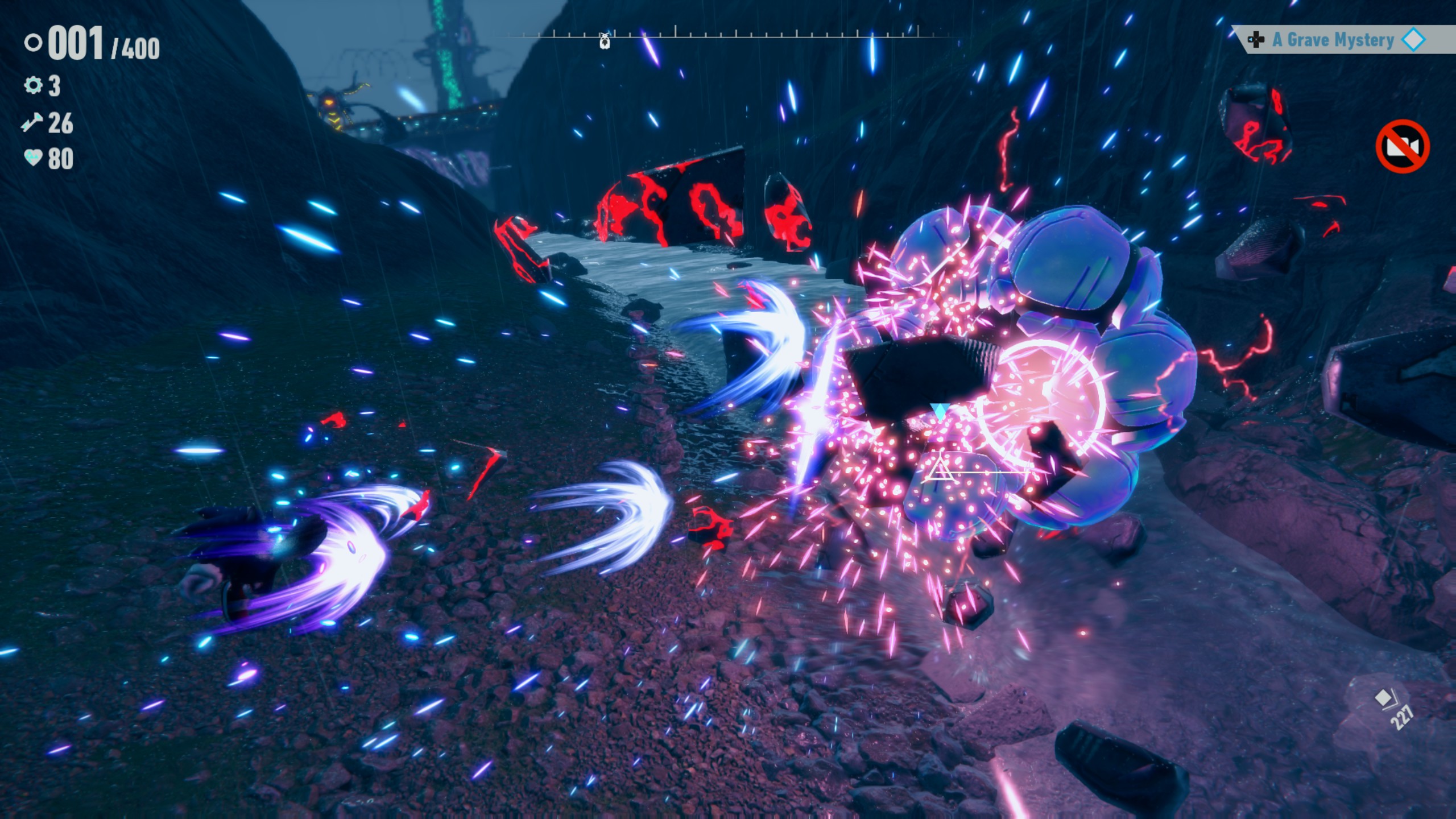 Oh, and here’s a little bonus. If you want to skip the intro video whenever you start up the game, you can either delete or rename sonicteam_logo.usm and sonicteam_logo_4k.usm. These files are found in /image/x64/raw/movie/ in the game’s install directory.

If you’d rather not run steamtinkerlaunch hmm start nightly in the terminal every time you want to open up HMM, you can add a desktop shortcut. Open a text editor and paste this in:

You can use something like this as the icon. Save it somewhere on your hard drive. Then point Icon to the file path of this picture. Save the text file to your desktop and make sure to give it a .desktop extension. On Pop!_OS, you’ll need to right-click the desktop file and select “Allow Launching” to make it an executable. On other distros, this step will probably differ. You’ll probably need to mark it as executable in the file properties menu.