Save Disk Space on Steam Deck with SteamOS-Btrfs 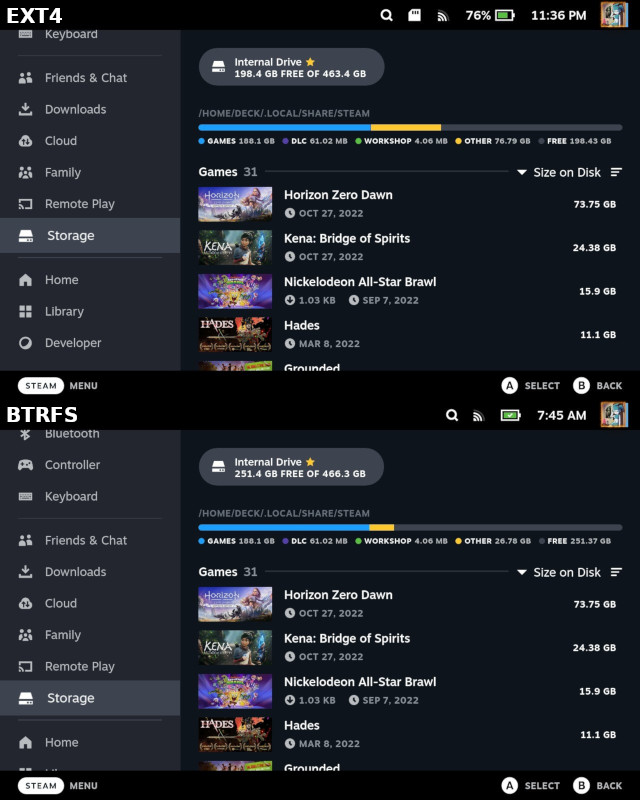 There are quite a few ways in which you can free up storage on your Deck. Besides cleaning up shaders, you can also convert the default ext4 file system the Deck uses into btrfs. A few benefits that come from converting to btrfs include:

Supposedly there’s also reduced loading times, but in the scarce research that I found, the Reddit post was deleted by the original poster. I have also personally confirmed that, at least for getting in-game with Horizon Zero Dawn, it took 29 seconds for both ext4 and btrfs. However, I haven’t tested shader compilation times, so that may or may not see a performance improvement.

Some caveats that I’d like to make you aware of before trying this out. First, neither myself nor the creator of SteamOS-Btrfs are responsible for any damage caused to your system. I was able to successfully convert my SSD to btrfs and keep all my games intact, but in Desktop Mode, some of my Flatpaks stopped working. Brave and Firefox, for example, wouldn’t run at all, leading to a ldconfig error. The only browser that worked for me was Chrome. In my testing so far I haven’t found a fix. So, keep that in mind.

Btrfs has its known issues – for example, encryption is not supported. You also can’t go back to ext4 after the conversion process has taken place. Finally, according to the README for SteamOS-Btrfs, this should survive updates to SteamOS, but I personally have not been able to verify that yet.

If you’re okay with all of this, then let’s go ahead and get started.

Make sure your SSD has enough space for the conversion to take place. You’ll need to have at least 10-20% of free space available. An easy way of checking this is by going to Desktop Mode and running this in a terminal:

Observe the Use% column. If it’s more than 80-90%, stop what you’re doing and clear up some space, be it uninstalling some games or deleting ROMs.

2. Set up Sudo (If You Haven’t Already)⌗

Set up a password for sudo privileges if you haven’t done so already:

You’ll be prompted to either create a password, or change it if this step has already been done before. Type your password in, then enter it again to confirm.

Enter these commands into a terminal, one line at a time:

Prior to installation, you can configure how you want SteamOS-Btrfs to work. This isn’t something that I have personally messed around with; the default settings should be good enough in most cases. 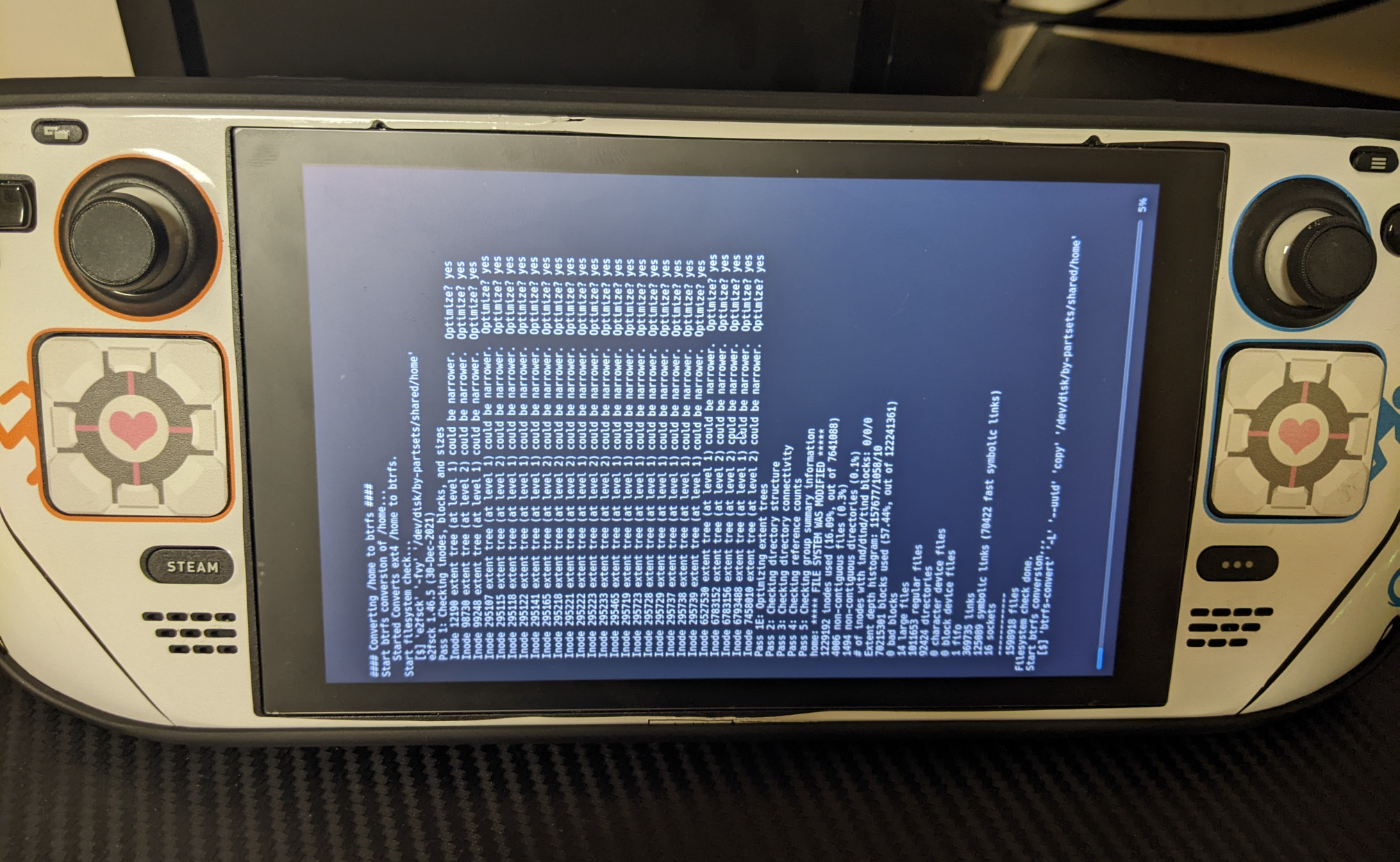 You’ll get a few pop-ups along the way. The Deck will reboot, and the conversion process will start.

This took quite a while on my end. I ended up having to leave the system on overnight for it to finish. If it appears as if the progress bar is stuck, it’s not frozen; it’s still working. So don’t turn the system off. After a few minutes of inactivity, the screen will turn off, but you can turn it back on by tapping the screen. Regardless, the process will still be running.

Here was my storage space prior to conversion: 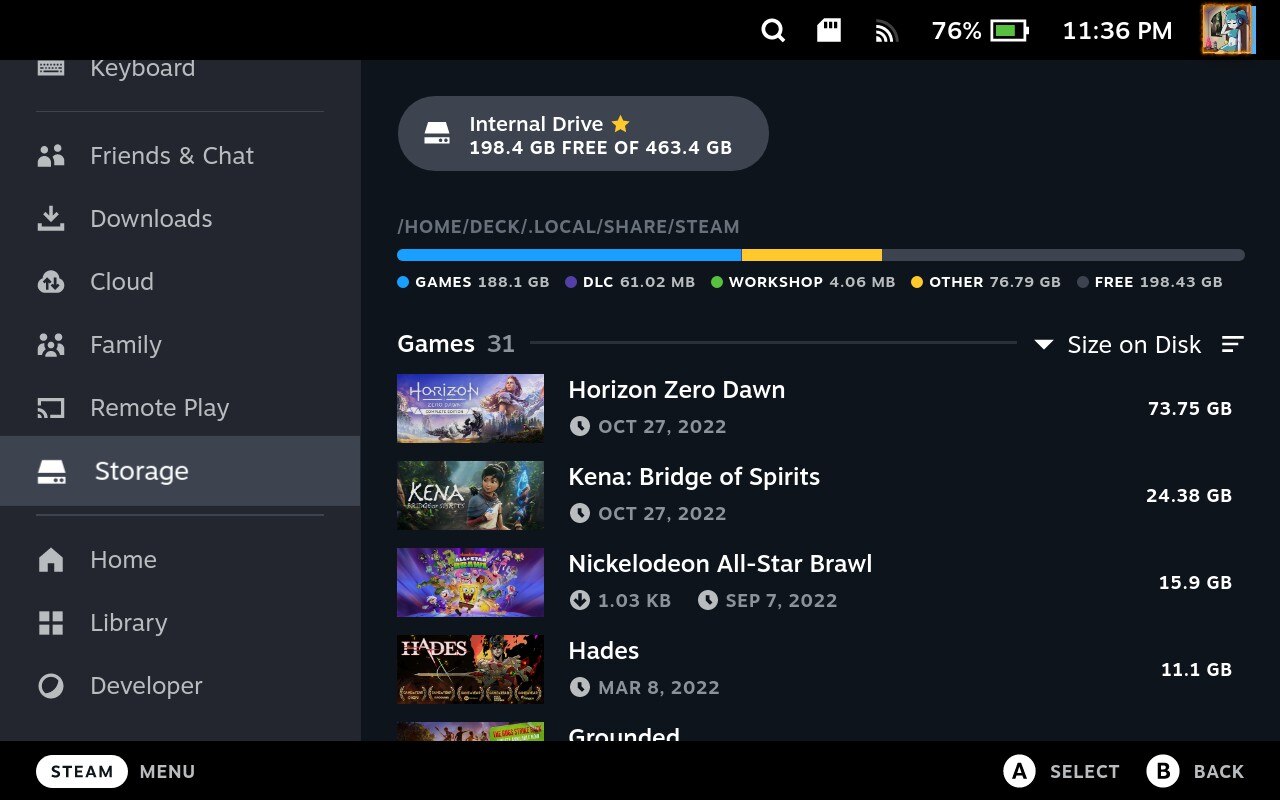 And here it is after converting the file system to btrfs: 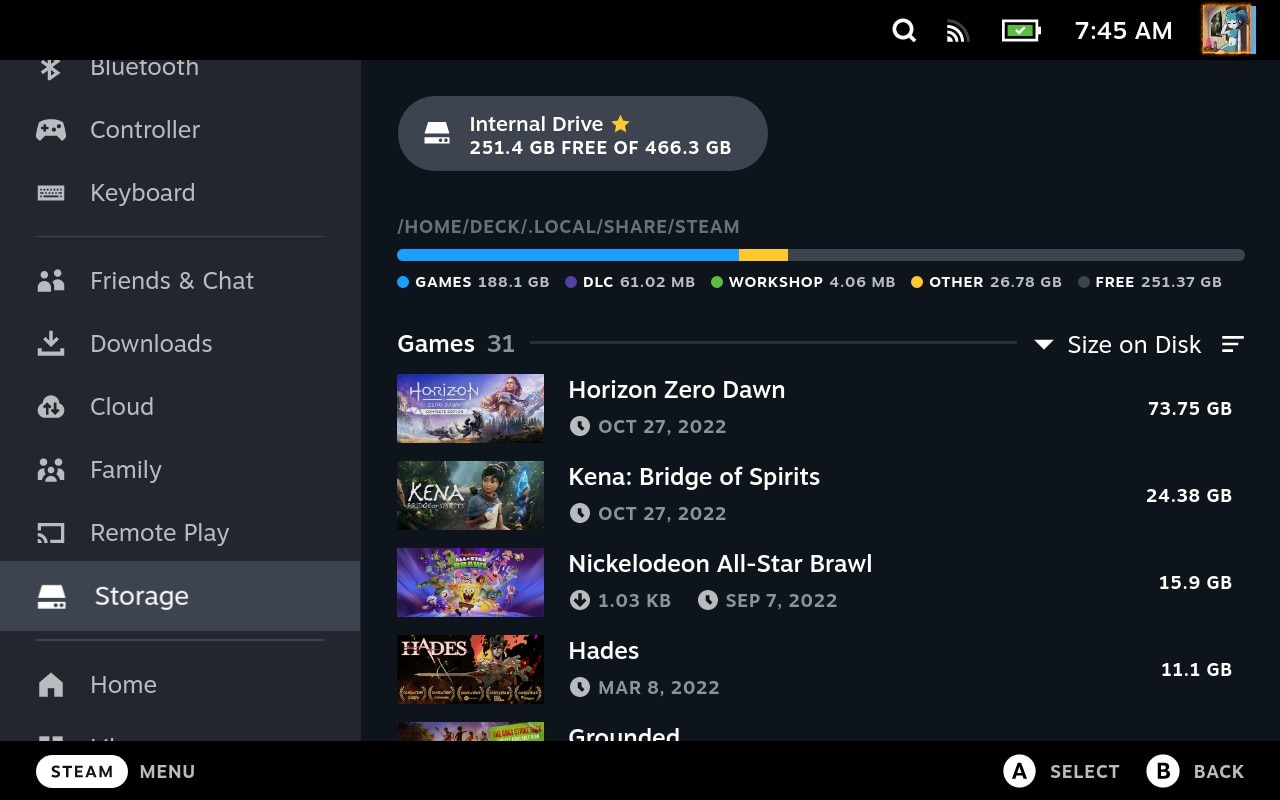 More than 50 GB was shaved. Though this is in the “Other” category, it’s more than likely a smaller Proton prefix footprint.

Besides the Flatpak issues, everything is running fine for me. Games are running the way they should, although I haven’t tested enough to confirm if the compression method btrfs uses actually reduces shader compilation times. I’ll tinker around with this some more and will update this post if I come across anything significant. Thanks to Philipp Richter for the script!