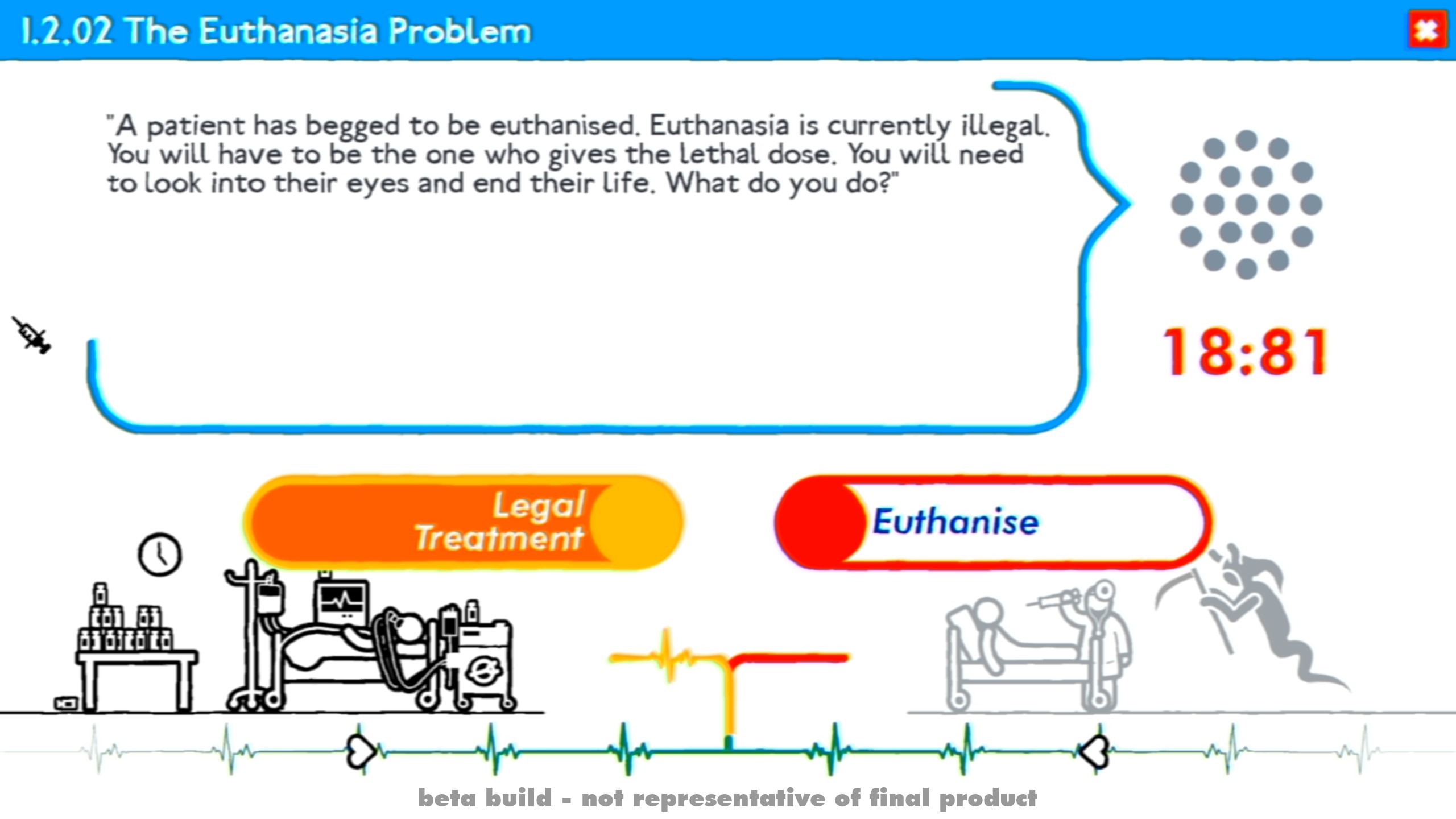 Five people are trapped on a train track. A train is coming and the only way you can prevent those five people from getting killed is by pulling a lever. That lever will cause the train to go onto another track, but the problem there is that track has one person trapped on it. What do you do? Will you let the train go to its default route, killing five, or pull the lever and let it take the alternative way and kill one?

That’s the very first question you’re presented with in Trolley Problem, Inc after signing an agreement. You have one of two choices to make in a matter of about 30 seconds. Either way, you’re going to end up killing at least one person. You just have to decide which choice makes you feel less guilty. If no decision is made, the default choice is selected, which in this case would be killing the group of five people.

What if the group of five people were criminals? Do they deserve the death penalty? What if the group of five were ordinary people, but the one person on the other track was the CEO of a company whose goal is to try and cure cancer once and for all? These questions aren’t presented to you in the game, but it just goes to show how many considerations you have to keep in mind, all in just a matter of 30 seconds or less. 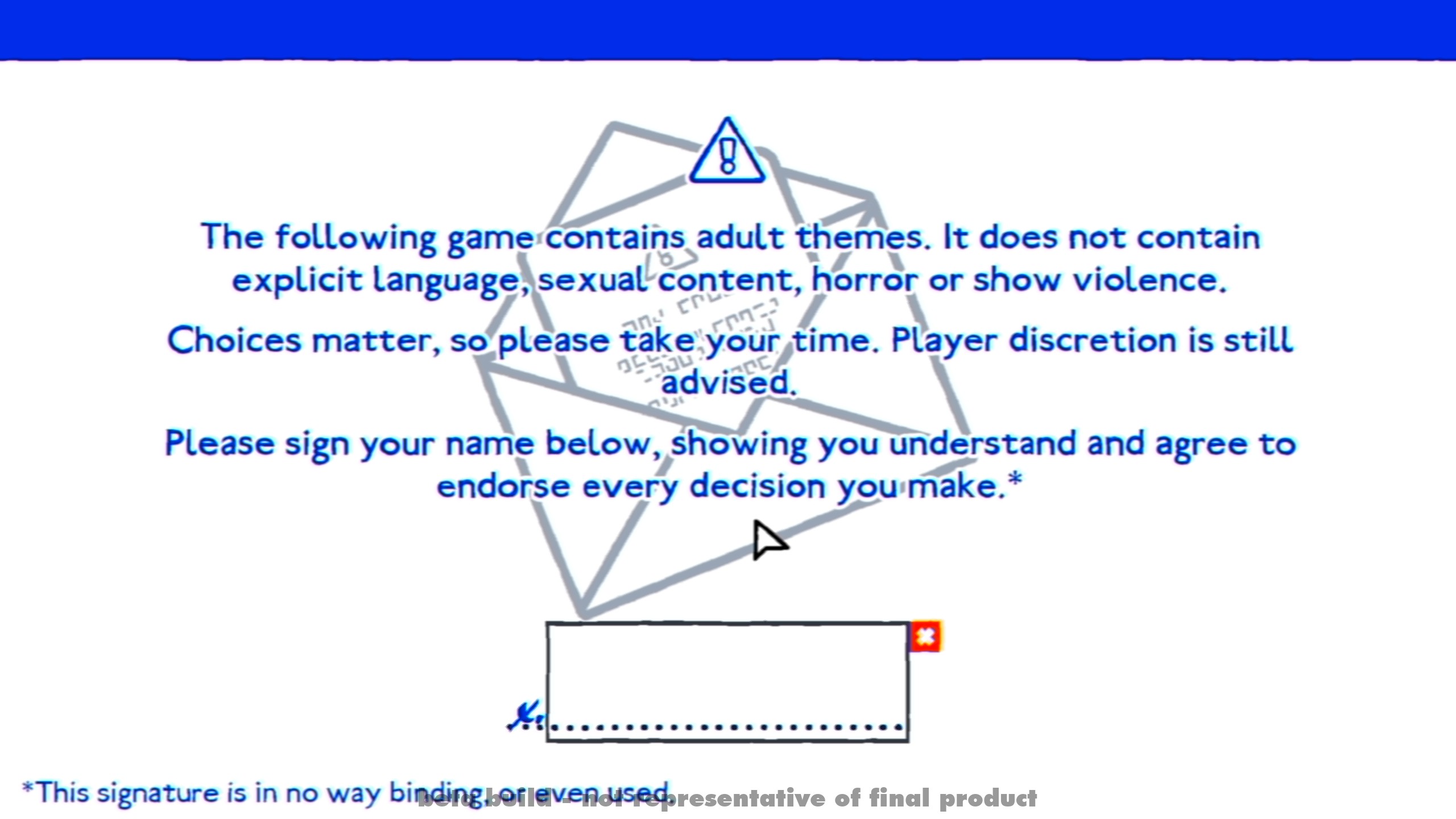 This pattern of deep questions continues to plague you throughout the time you play, where you have to turn your moral compass on and decide which decision is going to have less of an impact on people and on the world as a whole. From whether you should give a new heart transplant to an old patient that’s in need of it or to a younger man that just got into a car accident, to whether you should amputate a body part with a saw or a blow torch after a plane crash, to whether you should have a self-driving car run over a child that just tripped on the road or have the car veer off a cliff and kill the two passengers inside.

The game was created by Samuel Read-Graves, who was the executive producer of the hilarious Gang Beasts fighting game. But Samuel takes a complete turnaround with this game and, in case you couldn’t already tell, presents something that’s very dark. Not dark as in showing graphic violence, but dark in the way the themes are presented.

Thankfully the game won’t ask you for your political or religious stance, but a few questions do take a nod towards modern-day society. For instance, one question pits you as the doctor who has come up with a vaccine for children to end a endemic (think COVID). Only problem is based on previous tests, the vaccine makes one-in-five chilren sick to the bone. Will you mandate the vaccine, putting an end to the endemic but making a lot of children ill, or don’t vaccinate, leaving illness behind but the have endemic still go around? 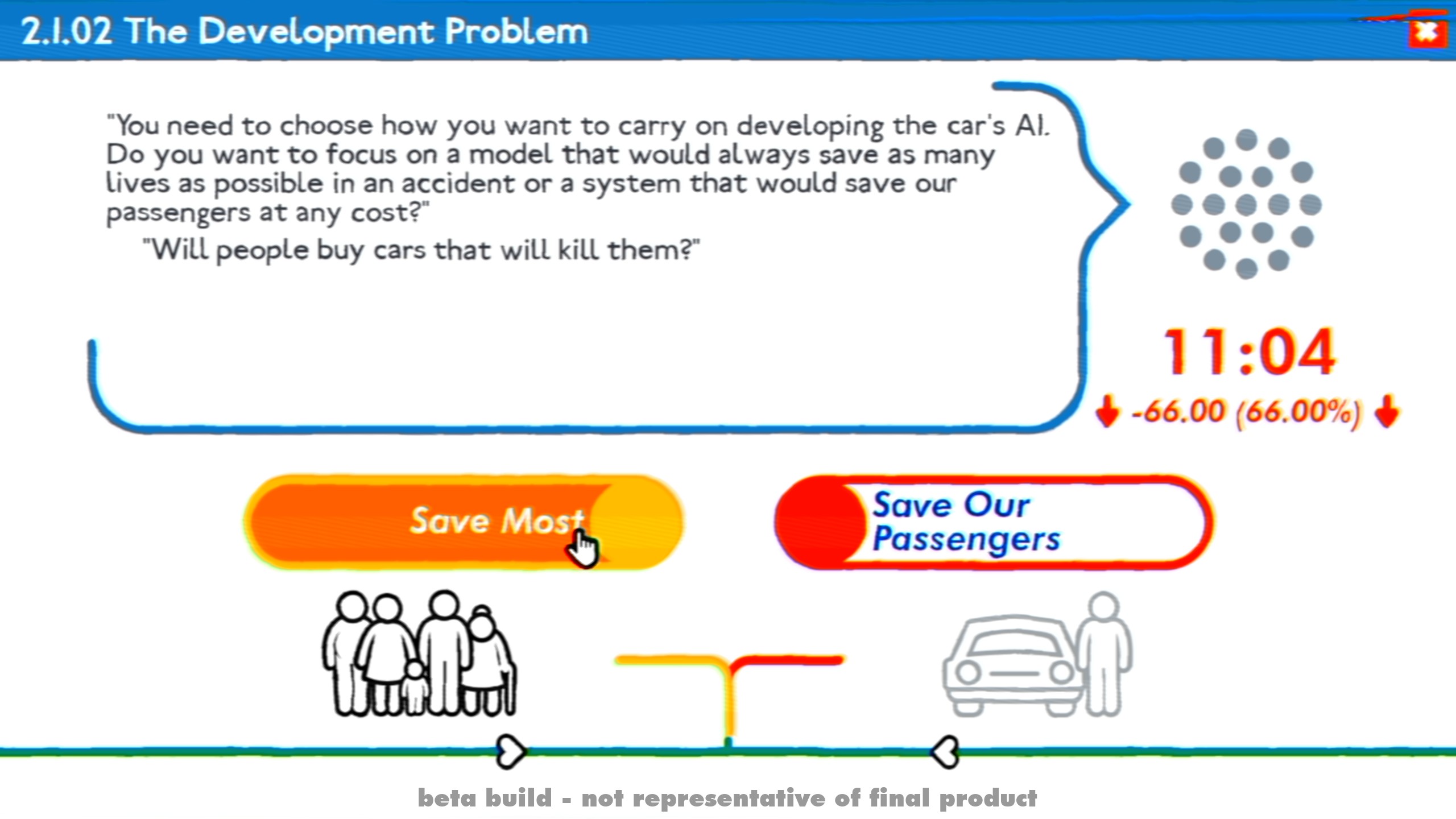 A female voice (by the name of Jan Ravens in the credits) will be your narrator throughout the questioning process and read the questions to you. She will usually make you feel guilty during this process, pressing questions that will question your moral compass. And regardless of what decision you made in the end, she’s going to push your guilt even further. “I don’t want to question your decision – you’ve obviously thought long and hard about it, but… well… this is awkward… I wasn’t aware you were such a spineless commie. Next, you will say you’re going to pay the company taxes.”

On this same screen where she guilt-trips you, you’ll see how many others who have played the game agree with you. You’ll also see whether you agreed or disagreed with ReadGraves. There are some icons below this; these will light up after opening up a chest. I don’t know what purpose they serve though.

After answering a few questions, you’ll get promoted and get asked the same deep moral questions as before, but on different subjects. So while initially you answer questions related to trains and who they kill, you’ll eventually get promoted to a hospital and get asked questions about who’s life should be spared while the other guy suffers. Then you’ll talk about electronic, self-driving cars and whether people should get free rides with ads, which collects tons of data about the rider, or go with a subscription-based service to drain their wallet. All in all, the game takes about an hour to get through. 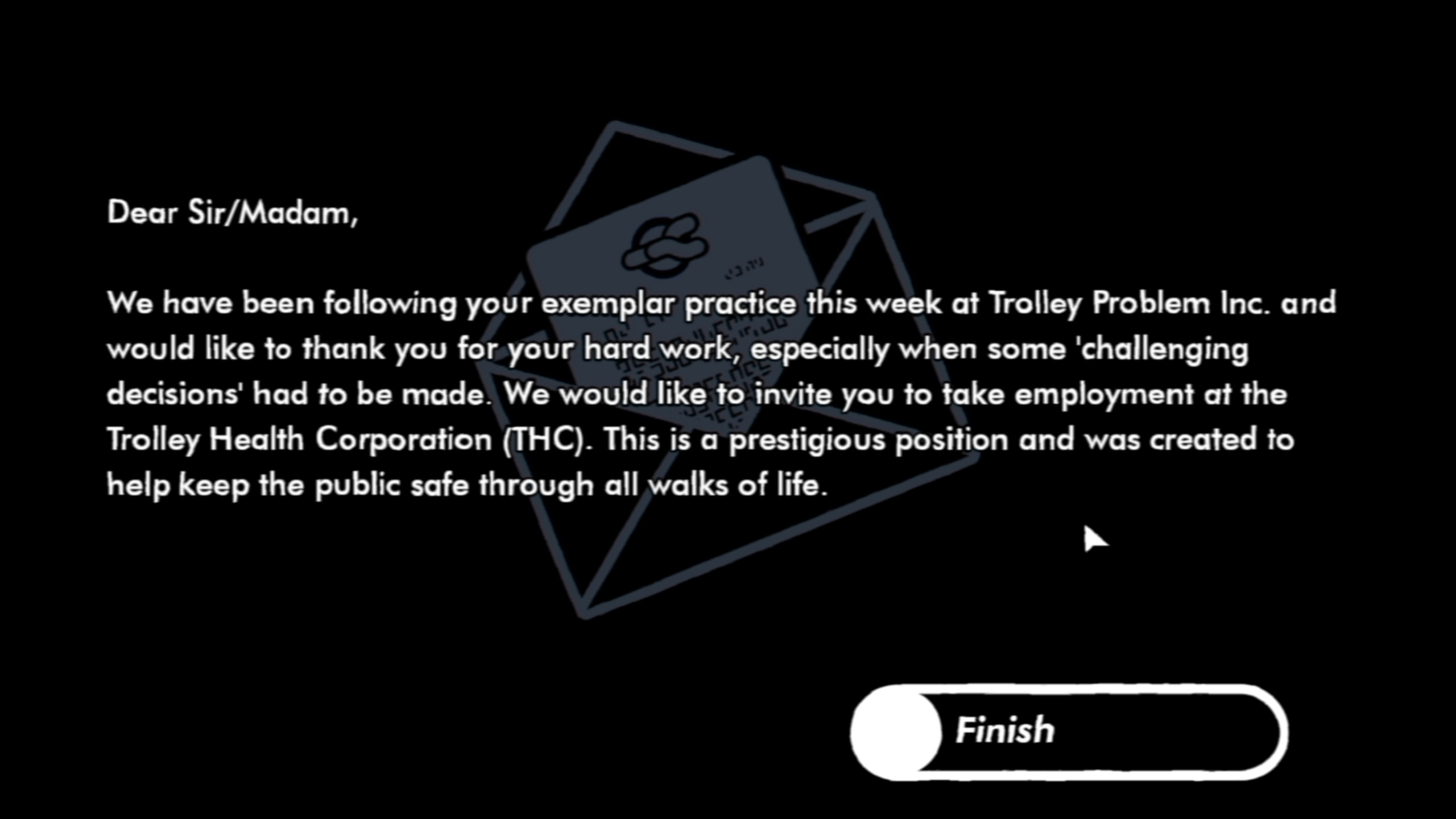 If you’re a streamer on Twitch, you can easily hook your account up with this game. That way, you can ask your audience what they think and help you to make a choice. There’s also local co-op, but this isn’t something I’ve tried.

What’s kind of neat is the whole interface for the game is in CRT-style, making it look like a game from the 90’s. This is an effect that you can turn off though if you want. And while you’re at it, you’re probably going to want to enable the fast-forward button, at least on subsequent playthroughs of the game. There are achievements too – if you cut off Jan while she’s talking, for instance, you’ll get the “Rude” achievement. Don’t feel bad about it; after all, she’s the one who’s always guilt-tripping you.

Game is for Windows but it works out-of-the-box on Proton.

Would I recommend you to pick this up? Heh…it depends on how you feel. If you like to get your moral compass challenged, then go for it. However, if the idea of killing someone regardless of what decision you make bothers you, you may want to find another game. 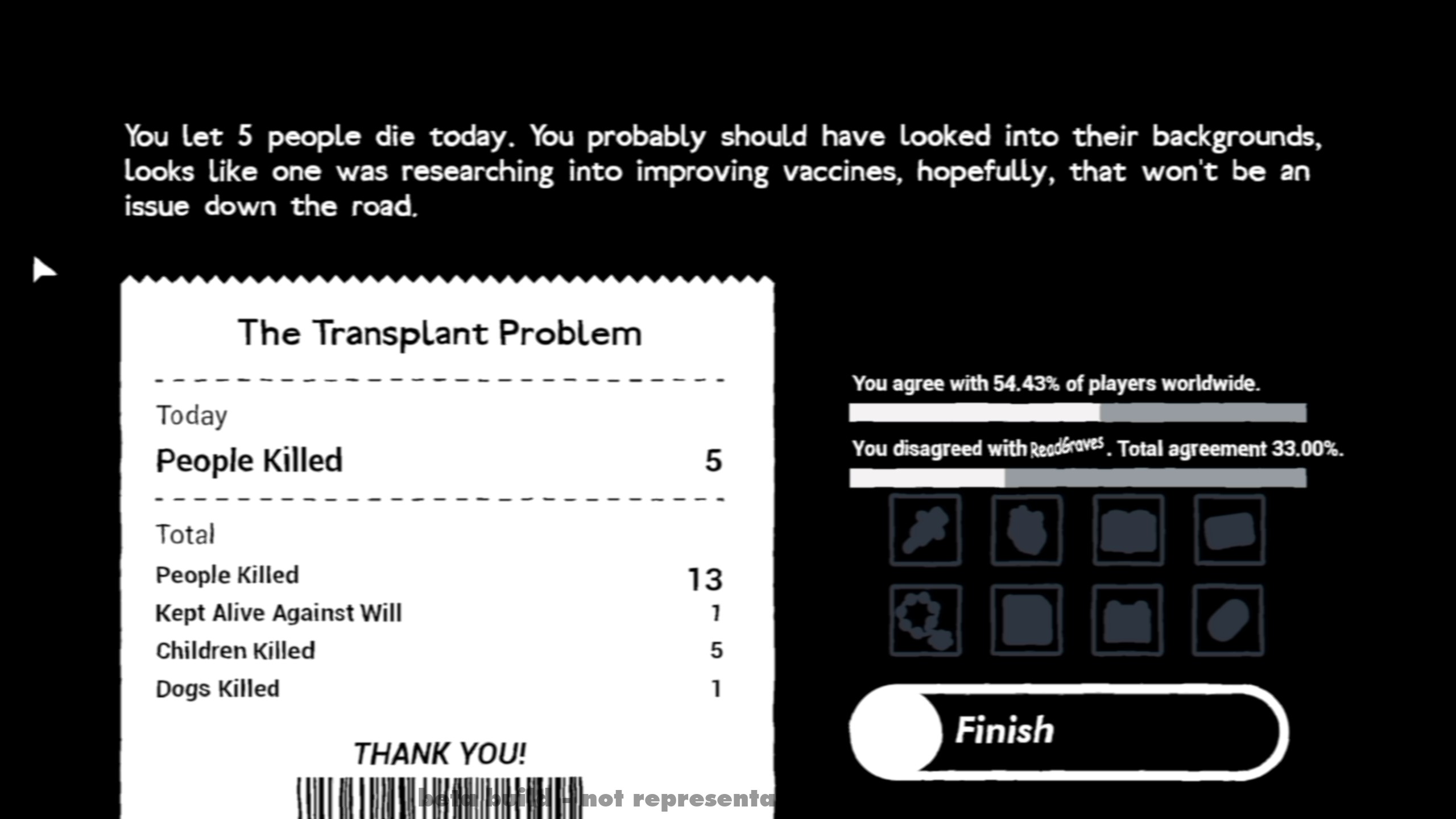 Trolley Problem, Inc. is available on Steam. If you want you can also follow the game’s creator on Twitter.

Read other posts
← Proton 7.0-2 Now Official, Adds More Compatible Games and Dozens of Bug Fixes You Can Update the Firmware for Your DualSense on Linux. Here's How →