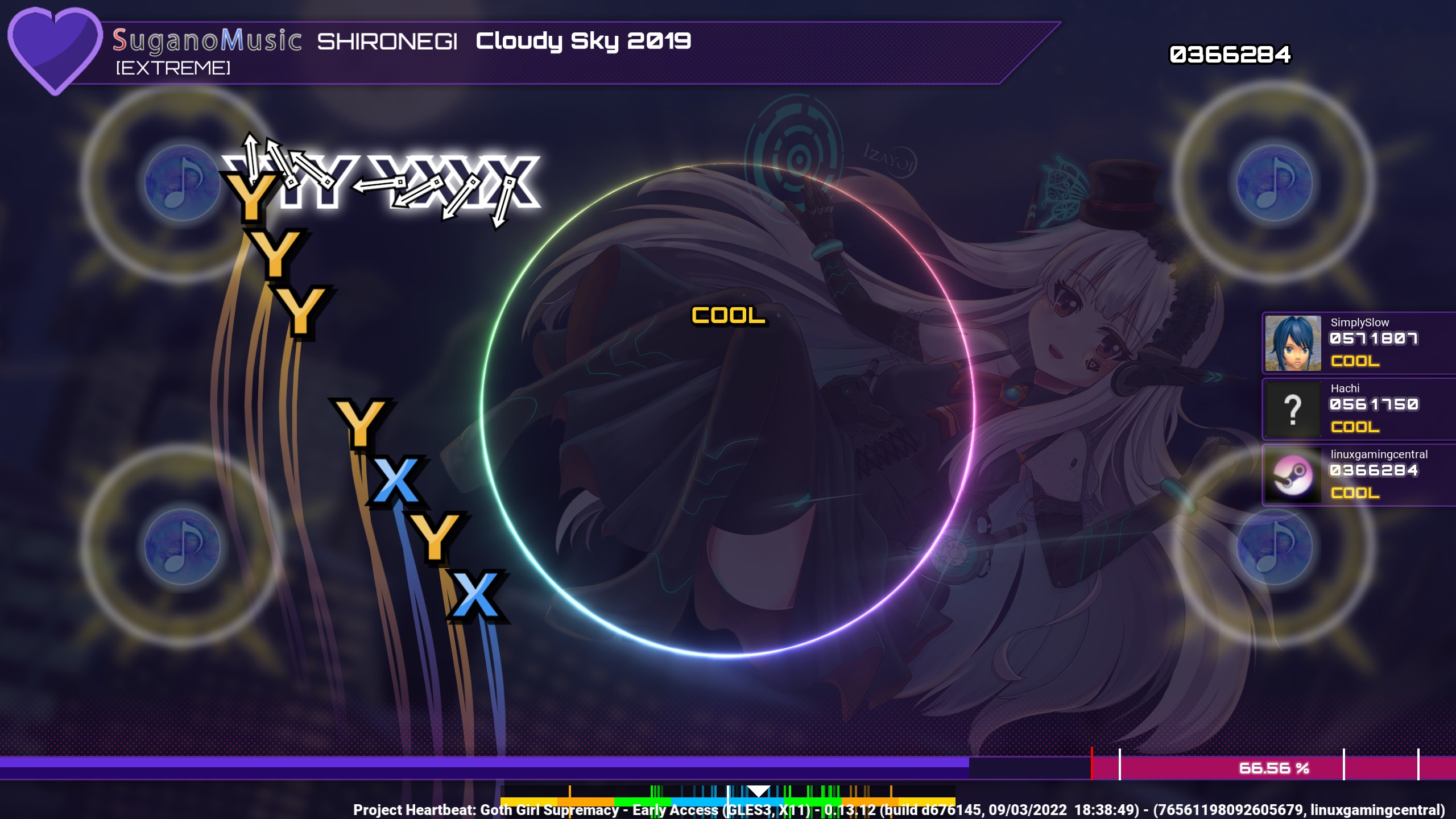 Ever play Project Diva? You’ll feel right at home with Project Heartbeat. It’s a rhythm-based game with a heavy anime theme. Big plus for those of you who are anime fans.

Please note that the game is currently in early access at the time of writing this; what is said in this review may not be reflective of the changes in the final product. Some things I mention may already be things the developer has in mind for a future update. 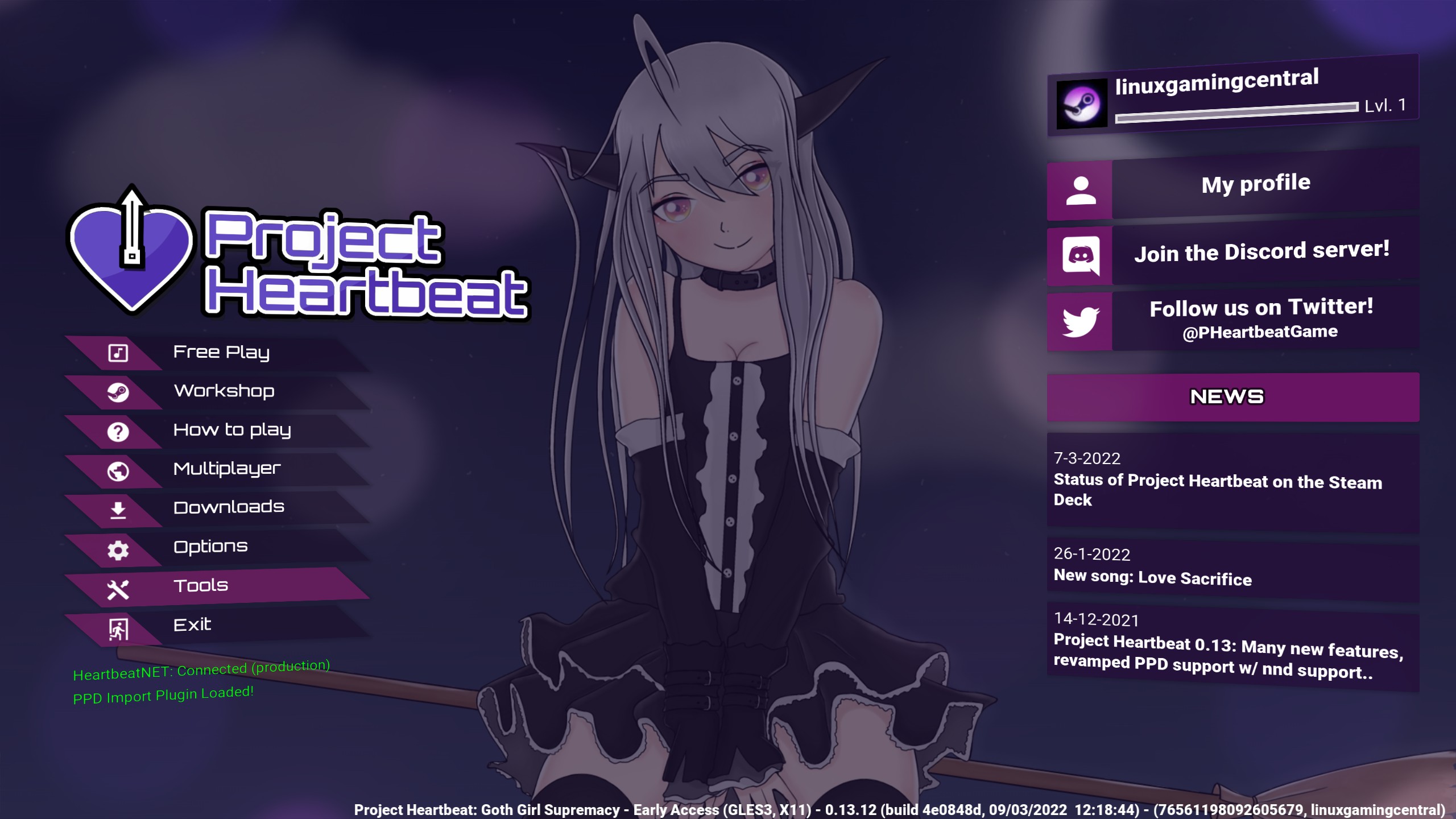 Project Heartbeat is inspired by Clone Hero (Guitar Hero spinoff) and Project Diva, though it’s clear Project Heartbeat takes a lot more inspiration from the latter. There’s currently 13 tracks to jam to, and evidently more are planned. According to the Steam store page, this music is “from top artists of the Eurobeat genre made popular by the Initial D anime and manga.” Artists include SuganoMusic, TORAV4, and Galaxian Recordings. Most of the tracks, while being played, have a semi-provocative anime girl in the background. Some tracks have English vocals; others don’t.

Notes will start appearing on the screen and move towards a certain destination. Your goal is to hit that note right at the time it intersects with the one that isn’t moving. Sometimes it’s a button press on your gamepad, other times it could be a flick of the analog stick or a combination of a D-Pad and button press. You might also need to hold the analog stick in a certain direction or press multiple buttons at once. The game also presents a pretty decent tutorial before each song is played to give you an idea of how it works.

The better-timed the button press is, the higher your score will be (I’ve noticed that in some tracks, if the note is missed, so will the vocal. This isn’t present in all songs though for some reason). There’s certainly a good variety of ways to hit the notes, though I think even more variety could be achieved with shoulder button/trigger presses. Keyboards are also supported. 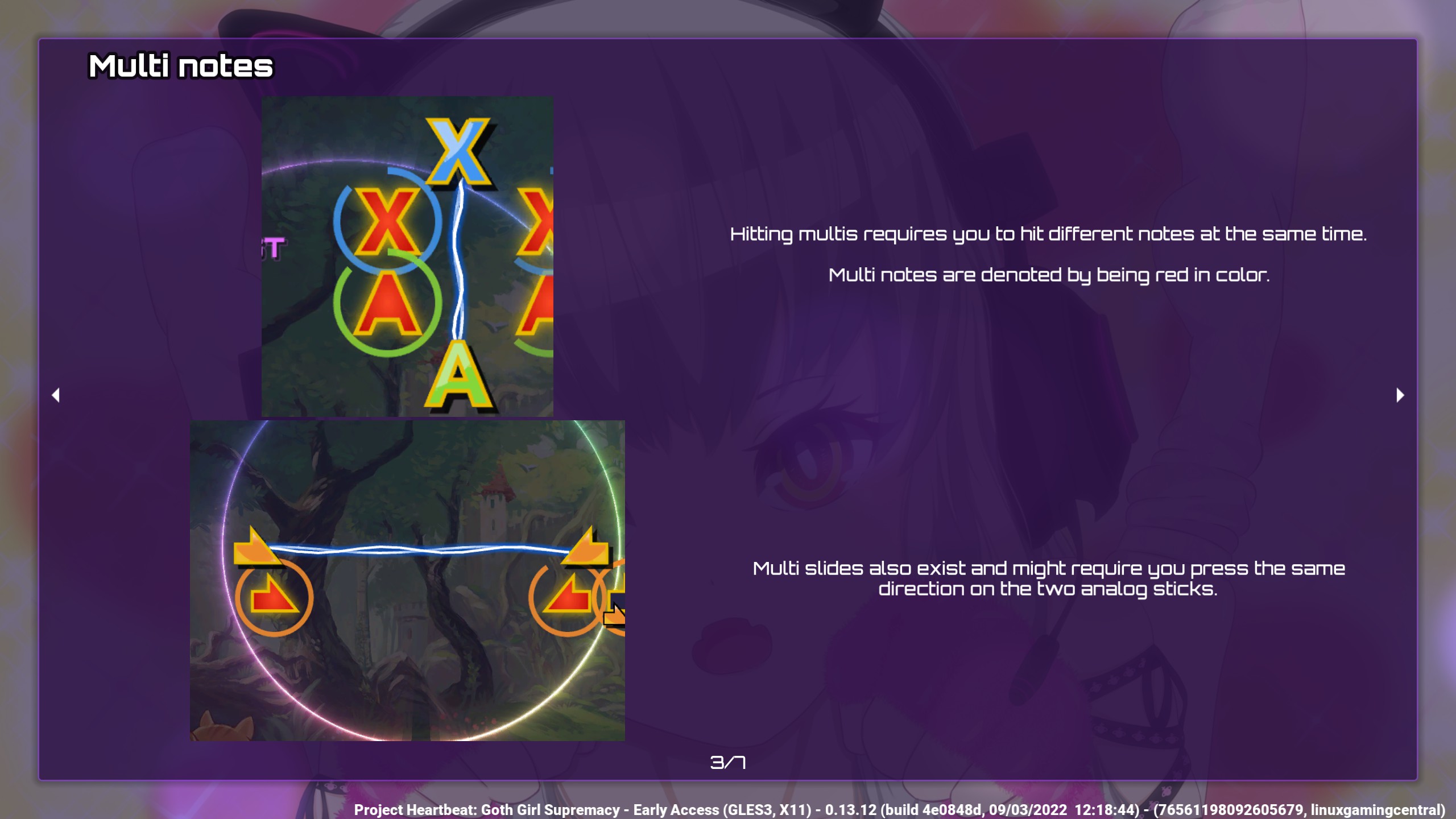 There’s four difficulty modes for each track, ranging from easy to extreme. Believe me, unless you’re a rhythm game veteran, you’re generally not going to want to do anything past Hard mode. Even Normal mode can be fairly difficult for some of the tracks. That being said, I’m not a pro at rhythm games, so that could just be me.

On the other hand, if you’ve played a song enough to the point where you can hit the notes with your eyes closed, even on Extreme mode, you can add modifiers to make the track even more difficult. You could have notes disappear just before they intersect. You could have the incoming notes move all over the place rather than in a pattern, making it incredibly difficult to predict what the next note should be hit. You could have the track sped-up as well.

On top of that these modifiers can be stacked, meaning that if you want the song to play 150% faster while having the notes disappear, for example, it’s totally do-able. That’s something that I will praise about this game; there’s a ton of difficulty options that will make even the most seasoned rhythm game pro cringe. Almost as many difficulty choices as there are options in the settings menu. 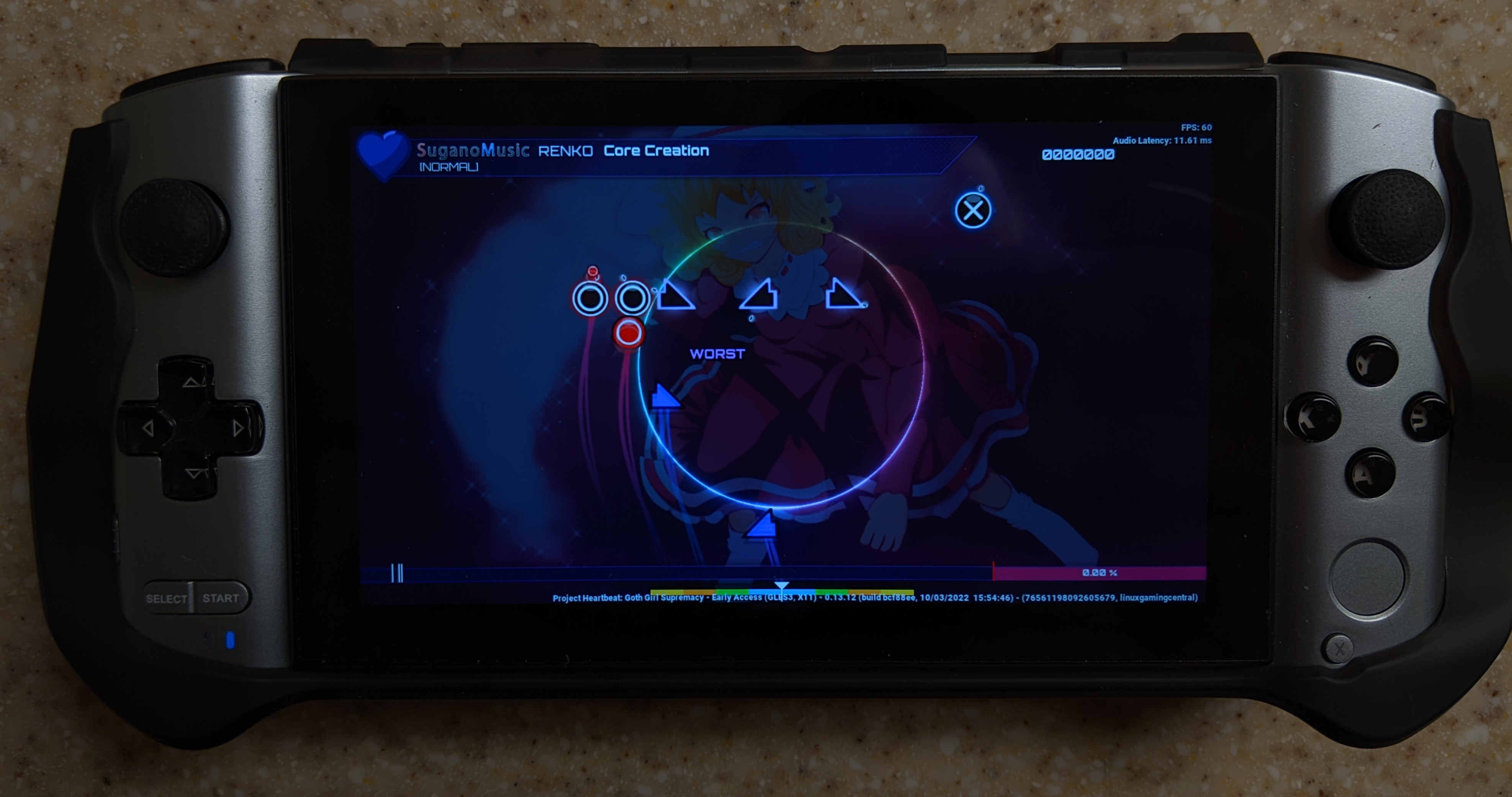 With each song is an online leaderboard. You can check the leaderboards and see who has the highest score. Higher difficulties result in higher scores, and modifiers can multiply the score even more. I won’t even try to compete with the top leaders, but for others, it’s a useful way to get better at a song, by competing with one another.

You can also compete with others in real-time via multiplayer. A track is played, and your goal is to get a higher score than the other players. Their scores are displayed on the screen alongside yours while the track is playing, so you can see when you need to really pick up the pace. I only got to try this mode once, but I definitely got my tuckus handed to me.

While you could play all 13 tracks in a day, here’s a nifty feature: you can create your own track and add it to the Steam Workshop for others to enjoy. There’s 23 pages worth of music workshop content at the time of writing this; you can browse through the catalog directly through the game and subscribe to someone’s content without having to use Steam. Content creators can even create resource packs that, for example, alter the button icon layout. Really awesome way of expanding the longevity of the game. Song creators even have the ability to have a video playing in the background. 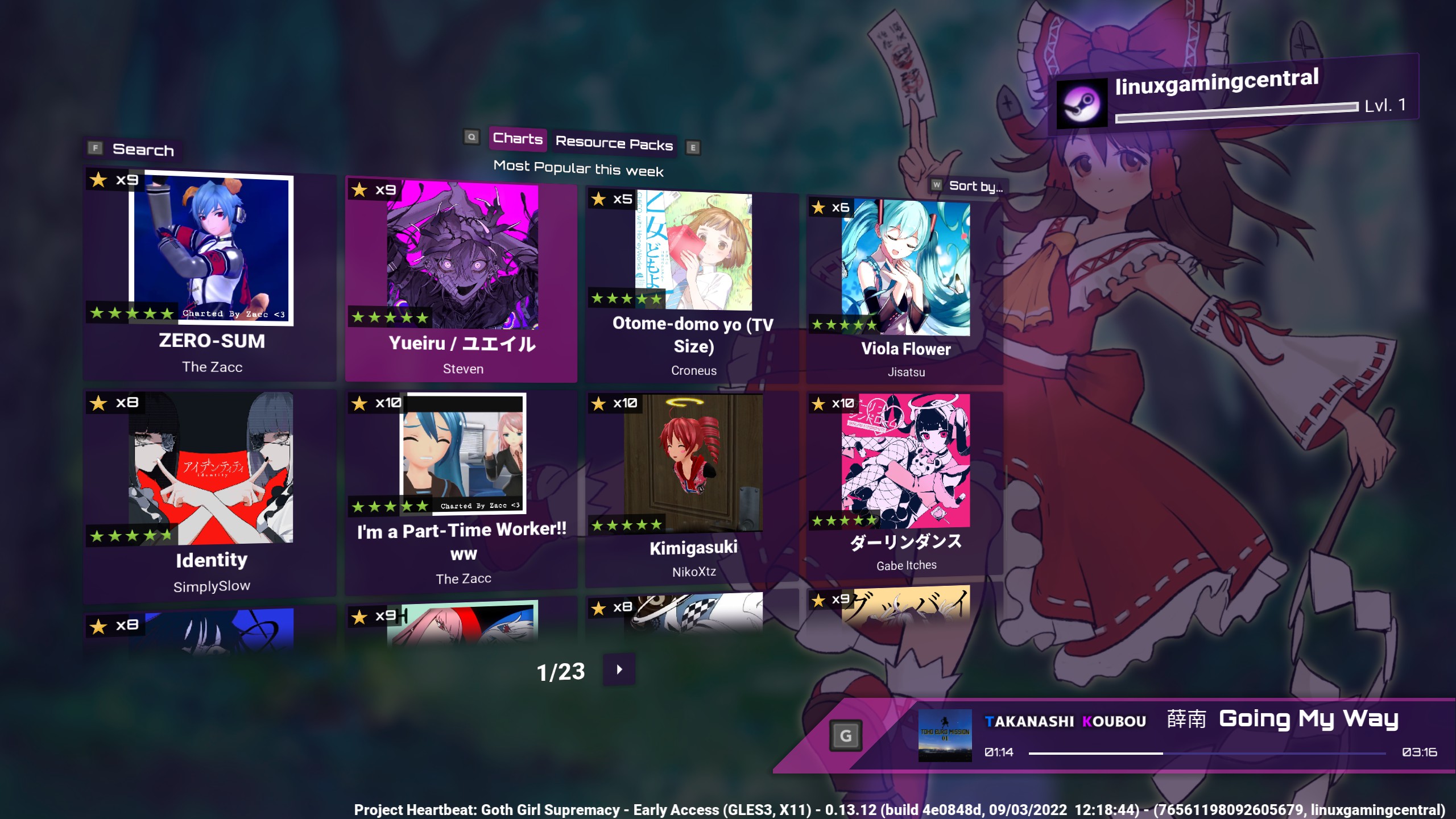 That’s one thing I wish the official tracks had: a video. Most of them are just an image of an anime girl, nothing else. I think it would make the game a lot more interesting if there was a video playing in the background, especially if said video ties in closely with the music being played.

I’d also like to see some kind of “game over” screen. You can miss as many notes as you want and it just keeps your score to a minimum. It would be great to keep the player on their toes by getting as many notes right as they can, and if they fall below a certain threshold, they have to start the song over. It would make the game even more interesting.

A story mode is a little too much to ask, but perhaps an arcade mode where the player plays a series of songs, then maybe meets a “final boss” track at the end. That would be great to add a little more purpose to the game. Maybe have a visual novel-style story and a character whose goal is to get famous by singing, and meet various characters along the way. Some characters could be friends, others an enemy. Just throwing some ideas out there. 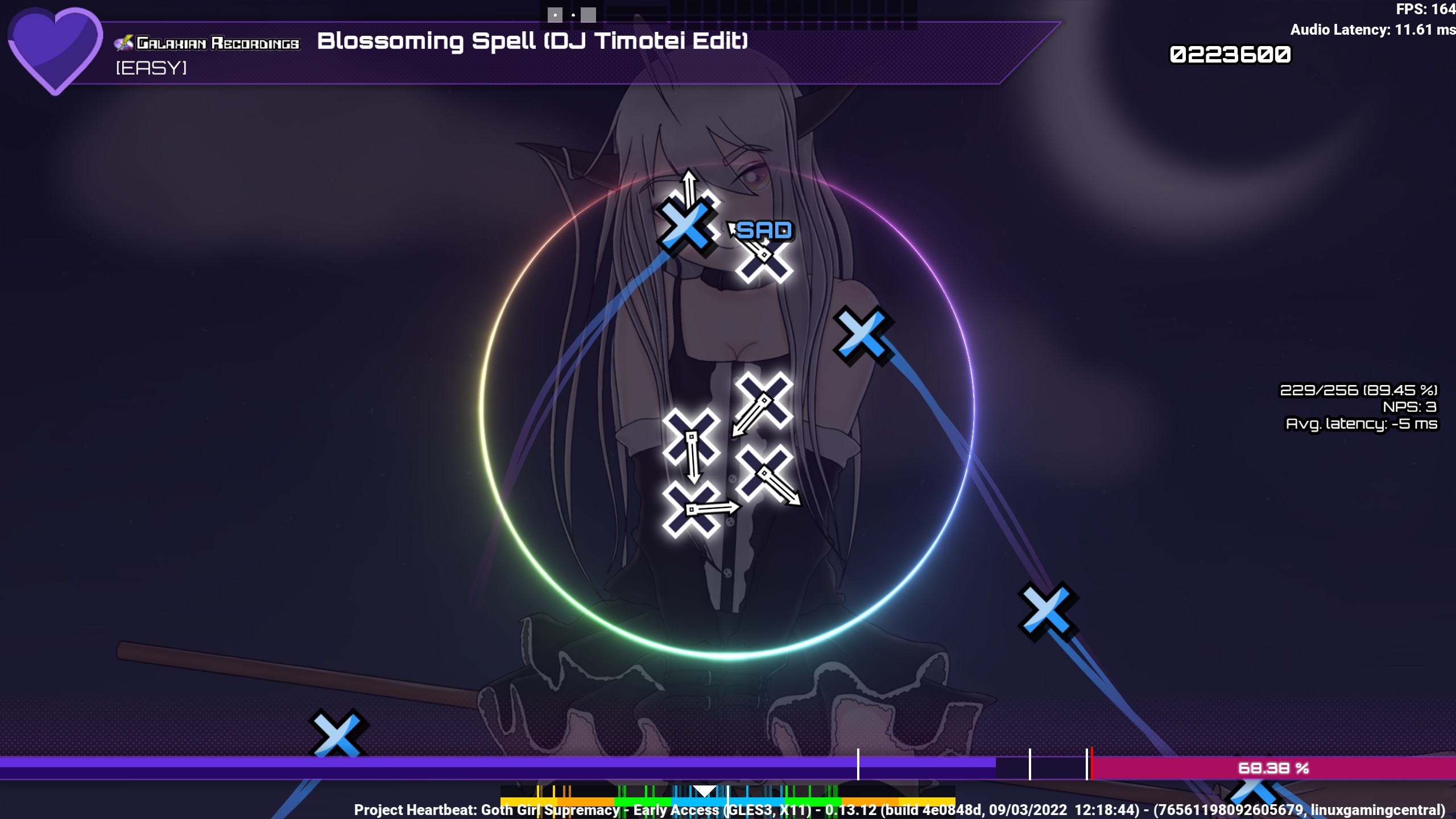 Project Heartbeat is available natively for Linux. It was built using the open-source Godot engine. Plays flawlessly on Arch and Pop!_OS. Even works great on my GPD Win 3. Should have no problem whatsoever playing the game on the Steam Deck, except maybe for using the song editor (that’s definitely a case where you’re going to want to have a keyboard and mouse). GLES2 is available as an option when launching the game if in case you’re using a computer with more outdated hardware.

I’ve got some gameplay footage here of my favorite song, “Going my Way.” Played it on Hard mode. But you can tell I missed a couple of strokes.

I was hoping to have this review out a little bit earlier since the game is on sale, but it still is 40% off on the Steam store for the next 21 hours. Give the game a spin and support Linux game development if you’re a rhythm-game fan!

TL;DR Decent rhythm game with plenty of anime, good tracks, difficulty options, and workshop content, could benefit from an arcade mode, video playback for official songs, and a game over screen.

Read other posts
← The State of Ryujinx, the Nintendo Switch Emulator (February 2022 Edition) Yet Another Reason Why Not to Install Windows on the Deck →