Portal Steam Deck Skin: So Good You Would Think It Was From Valve

A few months back Gardiner Bryant showed off the Half-Life vinyl wrap that he got for his Steam Deck. Come to find out he got the skin from Moskeeto Designs. I really liked the Portal-themed skin that he has, so I got in touch and asked if he would send it over for review.

Turns out he sent me all four of his skins (for some reason he’s not selling the Minecraft skin anymore; it has since been replaced with the Space Commander skin)! What a nice guy. In this article though I will mostly be focusing on the Portal skin. Later on I may try the Space Commander skin. I’m doing a giveaway on the Half-Life and Cyberpunk 2077 skins; you can find more details later on in this review. 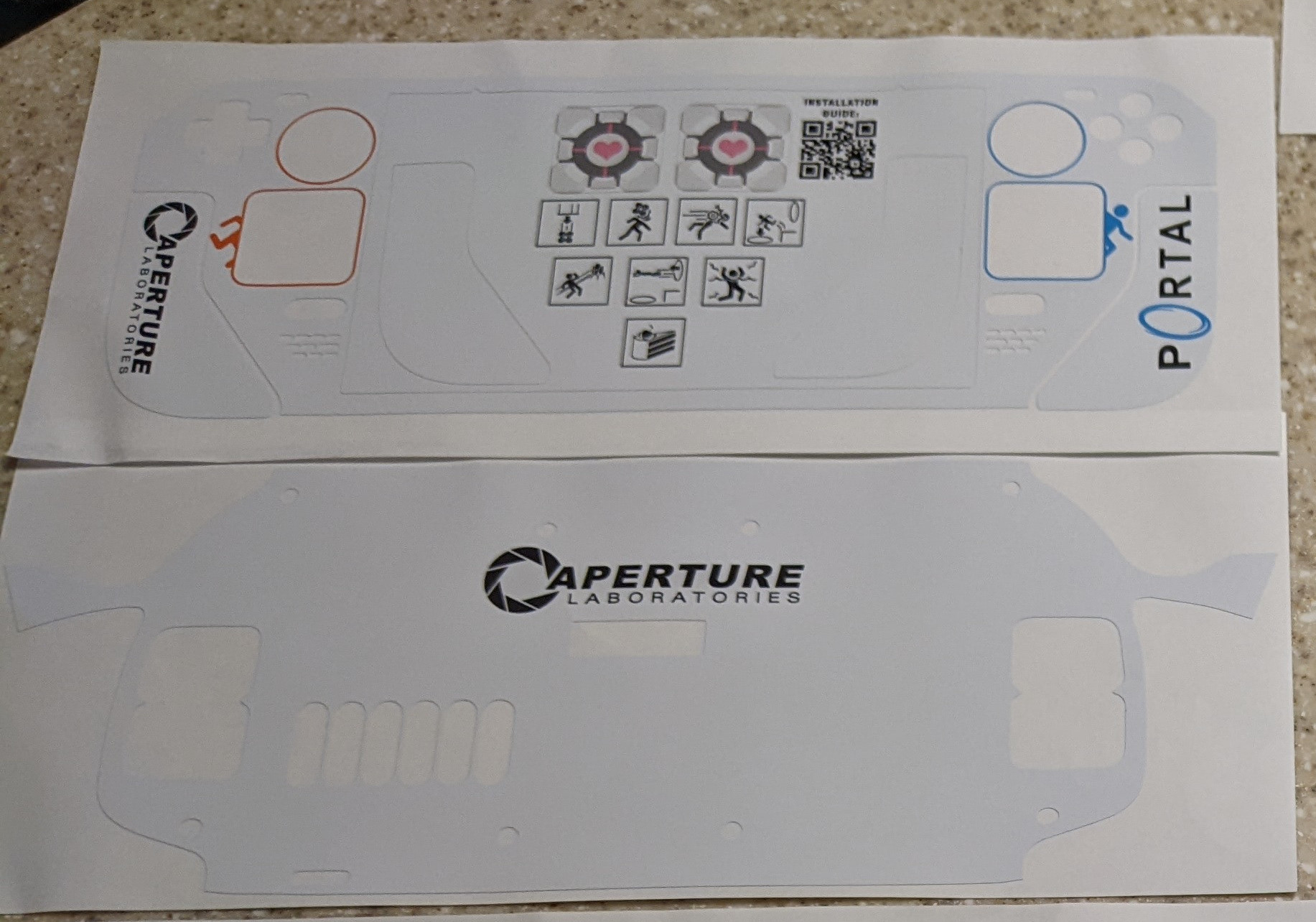 Keep in mind I’ve only been using this skin since I got it on Thursday. A few months down the road I may experience issues with the skin, such as it gradually peeling off. Not that I expect it to though; this skin is pretty strong.

Moskeeto Designs has a video on how to apply the skin. What’s nice is there’s actually a QR code on the paper on the front side of the skin that you can scan to see this video. Since I tend to be a bit more on the impatient side, I just tried to apply the skin without putting half of it on the paper first (video here). Mind you, putting any skin on the Deck is a very tricky process, and if I followed his instructions more carefully, I would probably have a better result. 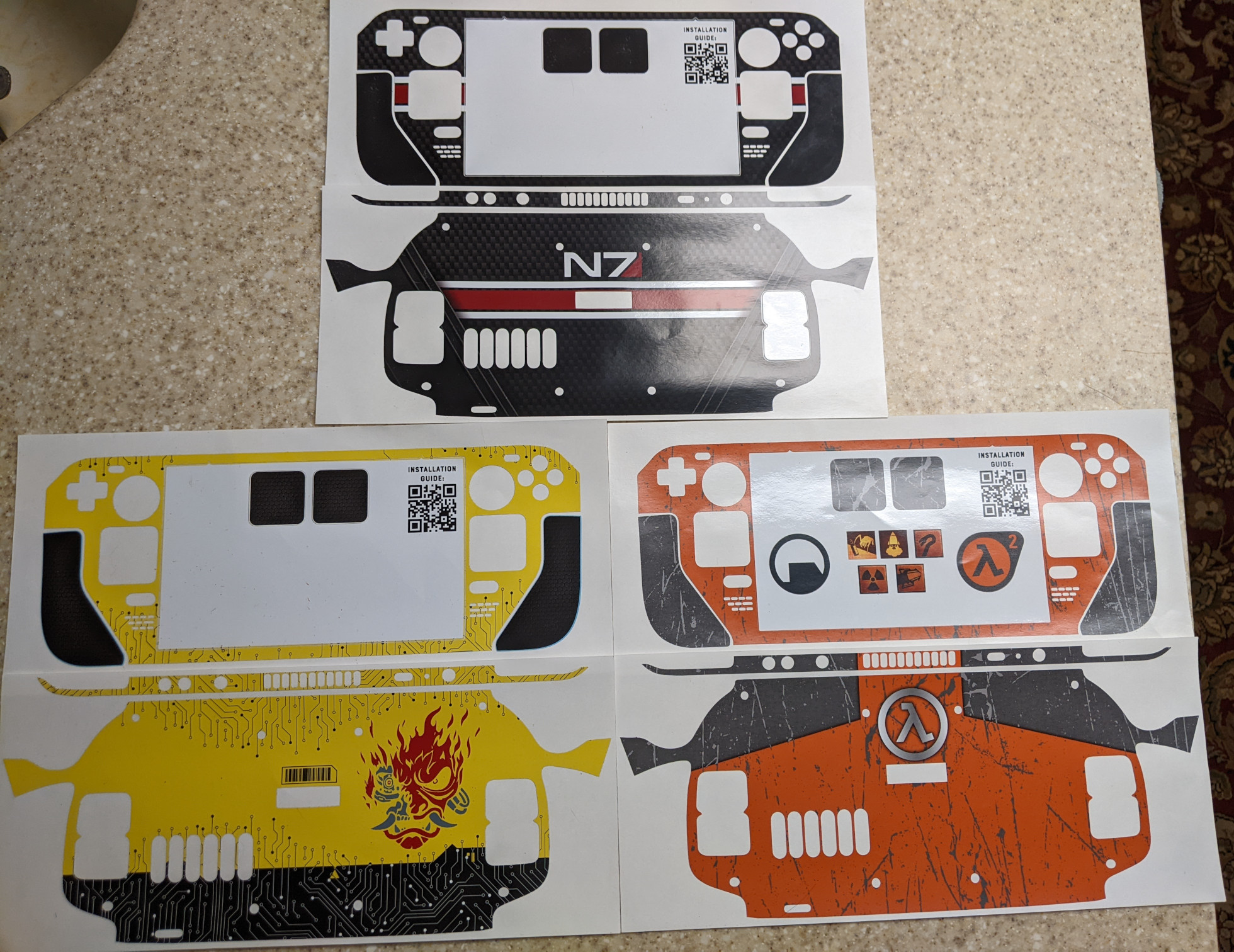 Not that I’m complaining at how it came out; for the most part it looks pretty decent to me. But for those of who have OCD, these pictures may be a bit of an eyesore (just ask Liam from GamingOnLinux for his opinion). As you’ll notice there’s quite a few bubbles on the back towards the upper-left corner, and creases by the screwholes on the bottom left and right. There’s also a few creases in every corner on the front, and I couldn’t get the skin to move enough so that the entire Steam button was uncovered. Despite the amount of times I’ve tried heating the skin up with a hair dryer, I just could not get rid of either the bubbles or the creases.

The skin is made of vinyl. It’s thin as a sticker. Overall it feels very good in my hands. My fingers don’t really pick up the creases or the bubbles, albeit for the grips. I really like the design of the skin too. A small element that I found interesting is the orange stickman on the left side of the left trackpad. The rest of his body appears on the right side of the right trackpad, and this time the stickman is blue. Nice attention to detail, in harmony with the colors in the Portal series. I also appreciate the fact that there’s holes on the back side of the skin where the screws go; this means you can still take apart the Deck without having to remove the skin.

One other small attention to detail is the top part on the front side of the skin has these little, tiny cutouts so that the Deck’s microphones aren’t covered. And Valve’s logo is still present on the back side. I can tell Alex from Moskeeto Designs really made sure every aspect was thought of and covered when he made this. 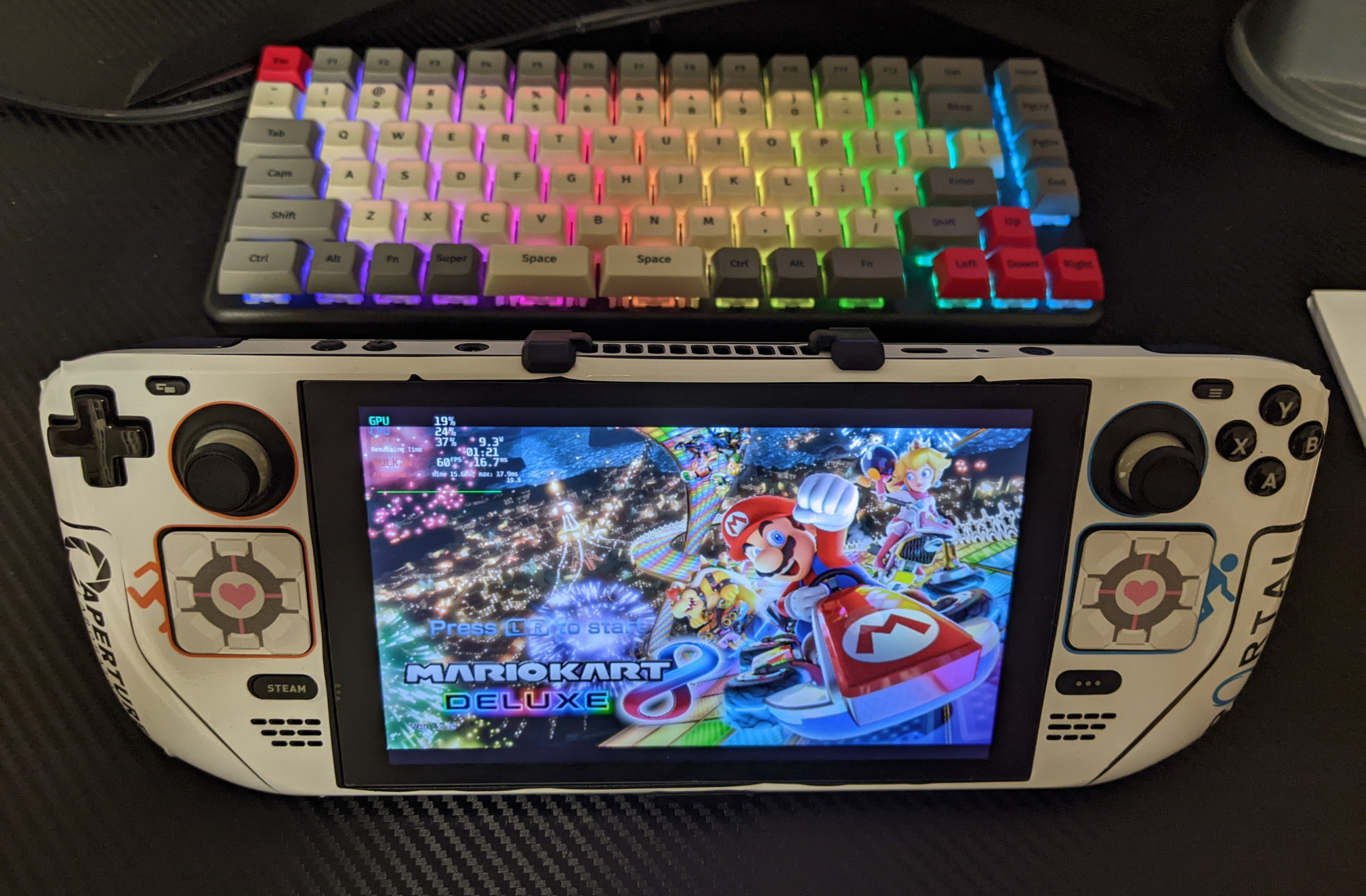 What’s nice is there are two sets of grips; one pair with some logo design, the other without them. You can choose either one when putting them on the front of the chassis. Then you have a spare set of skin grips should you change your mind or you weren’t able to put them on correctly. This particular area definitely needs some hair drying though should you want the edges to conform nicely along the curves.

Though I didn’t put them on in the video, I later on put the Companion Cube stickers on the trackpads. To my surprise the trackpads still function as they should; gyro and all that! Kind of amazing how that works. And it makes my Deck look even prettier. There are some small, square-shaped stickers containing the various hazard pictures from the Portal series, but I frankly don’t know where I’d put these. Maybe on the Deck case?

One small nitpick that I have is I would have appreciated back grips in addition to the front grips. Without these there’s a small area on the back of the Deck that remains uncovered. Your hands are going to feel the inconsistency between the black surface and the skin as your fingers wrap around the Deck’s grips. Maybe that was intentionally omitted; I don’t know.

So is the skin worth the $25? I would say so. The design is excellent, the skin feels great in the hands, the attention to detail – even in the smallest of ways – is minute, and though I can’t confirm this just yet, this skin is probably going to last a long time before it starts peeling off, if it even does. The instructions that Alex gives for putting his skins on are very detailed; he’s going to make sure you don’t have bubbles on your skin, unlike mine. I love showing this skin off on my Twitter and Mastodon feeds. Do show your support to Alex by buying one of his skins on Etsy if you’d like to try them out! Shipping is free too. 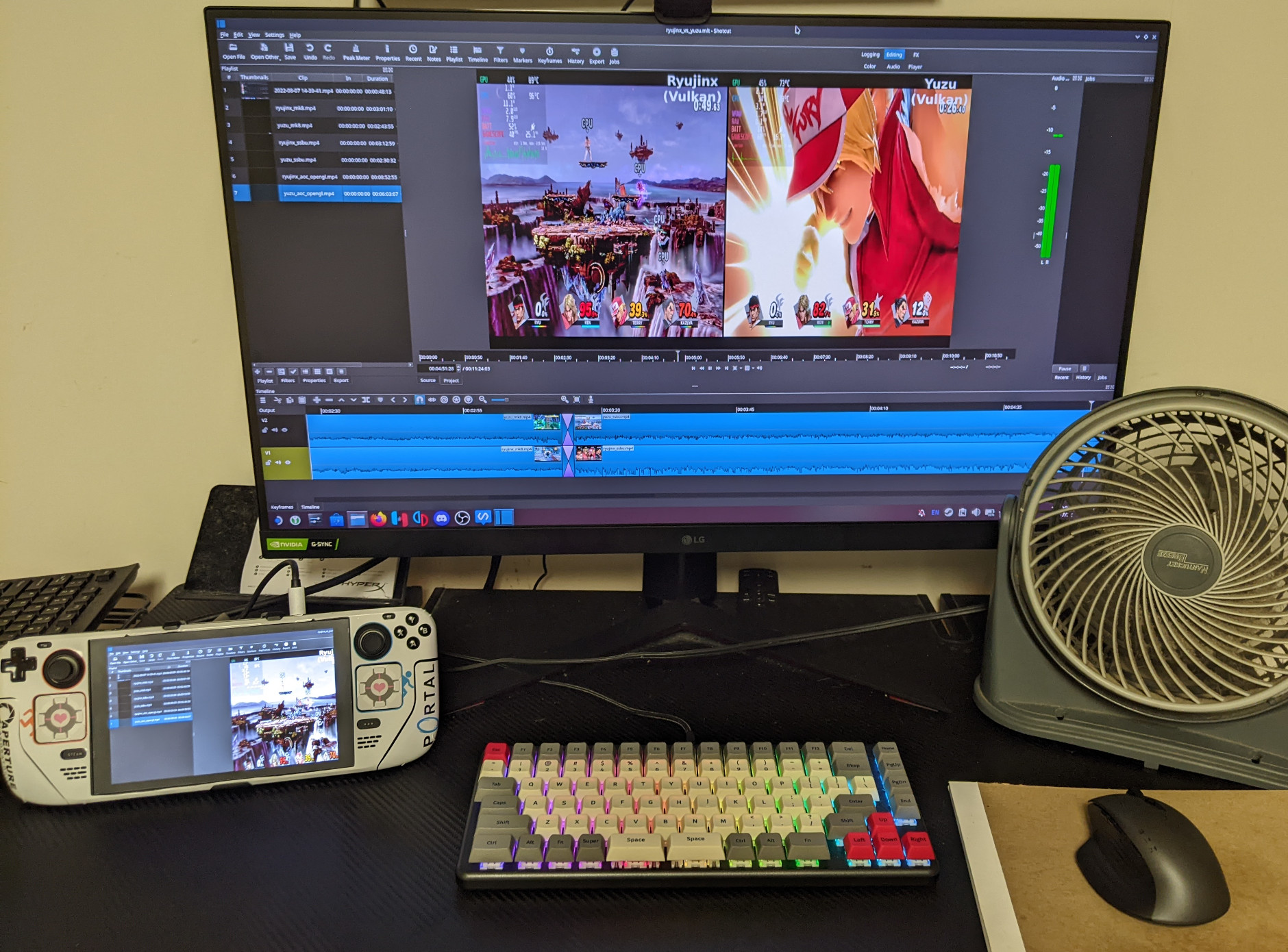 If you’re a penny pincher like me, though, you may want to look into the skins by PlayVital. They’re less expensive at $16, plus you get a set of two. You get what you pay for, though; there’s no front grips, and the sticker feels cheap (believe me, I know this since I was using one of their skins prior to getting the Portal skin). They’re definitely not vinyl, and I would imagine within a few months’ use they’re going to start peeling off.

Up next: a review of the DeckMate accessory!

Review skins sent courtesy of Alex from Moskeeto Designs. Opinions are of my own.

Since I really only had interest in the Portal skin, I’m giving away the Half-Life and Cyberpunk 2077 skins (I got Alex’s permission for this). I’m keeping the Space Commander skin though since I like it.

I’m going to keep this simple: re-Tweet or re-Toot this review (but please don’t do both; I don’t want anyone doubling their chances). I will pick two winners at random a week from now. I will cover the shipping cost and ship it anywhere, in the US and outside.

The following is optional, but I would really appreciate it if you also: