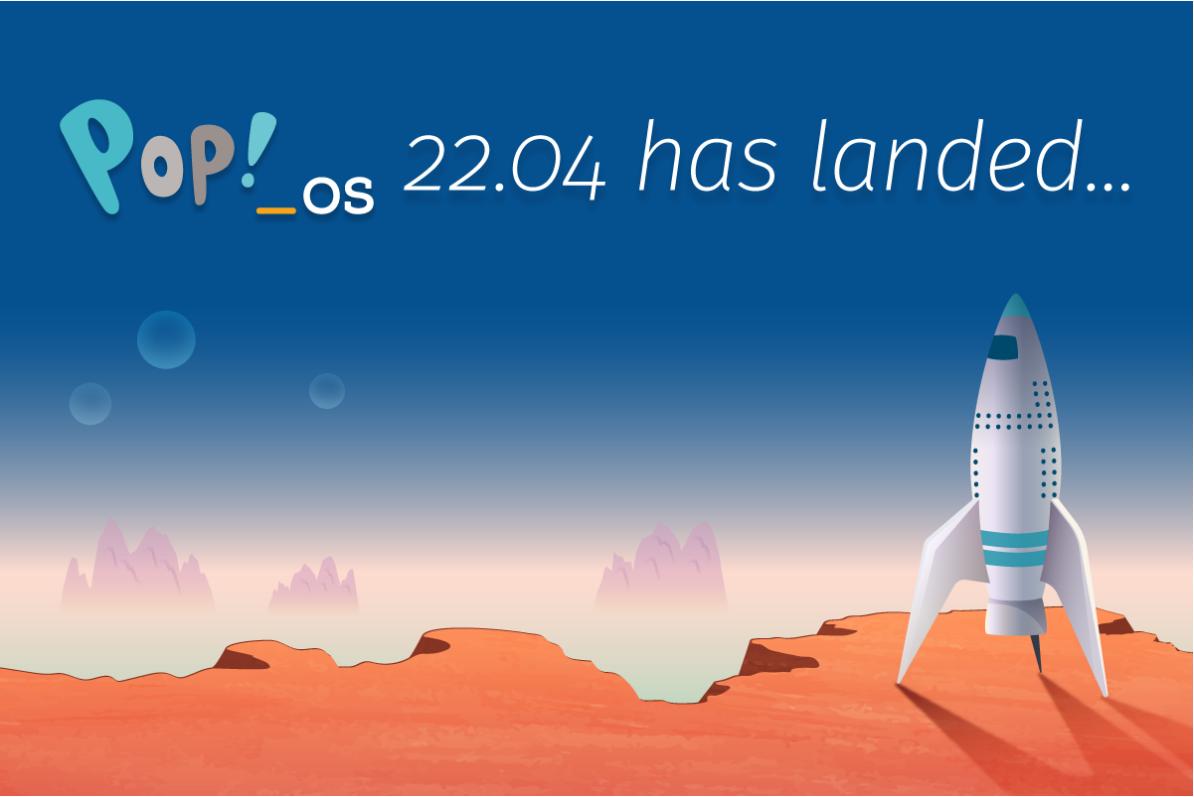 Pop!_OS – the Ubuntu-powered distro created by none other than the geniuses at System76 – has just released 22.04 LTS (long-term support), shortly after the release of Ubuntu 22.04. There’s quite a few exciting things going on with this release, so let’s go over the changes.

As far as base upgrades are concerned, the kernel is using 5.16.19 (kind of surprised they didn’t go with 5.17), Mesa drivers have been upgraded to version 22, and the desktop environment is based off of GNOME 42 with System76’s COSMIC UX spinoff.

PipeWire is a much-needed upgrade to the old PulseAudio system, bringing with it lower latency, real-time multimedia processing, sandbox support, and plenty of other features, while still being backwards-compatible with PulseAudio. Pop!_OS 22.04 has switched to this newer audio system.

Getting support is now as simple as going to the bottom of the Settings menu and selecting one of the options available. You can view the support documentation on System76’s website, use the community chat room (there are S76 engineers in that room as well), submit a support ticket, or generate a log file, from which you can send to one of their “Happiness Technicians” to more effectively troubleshoot your issue. 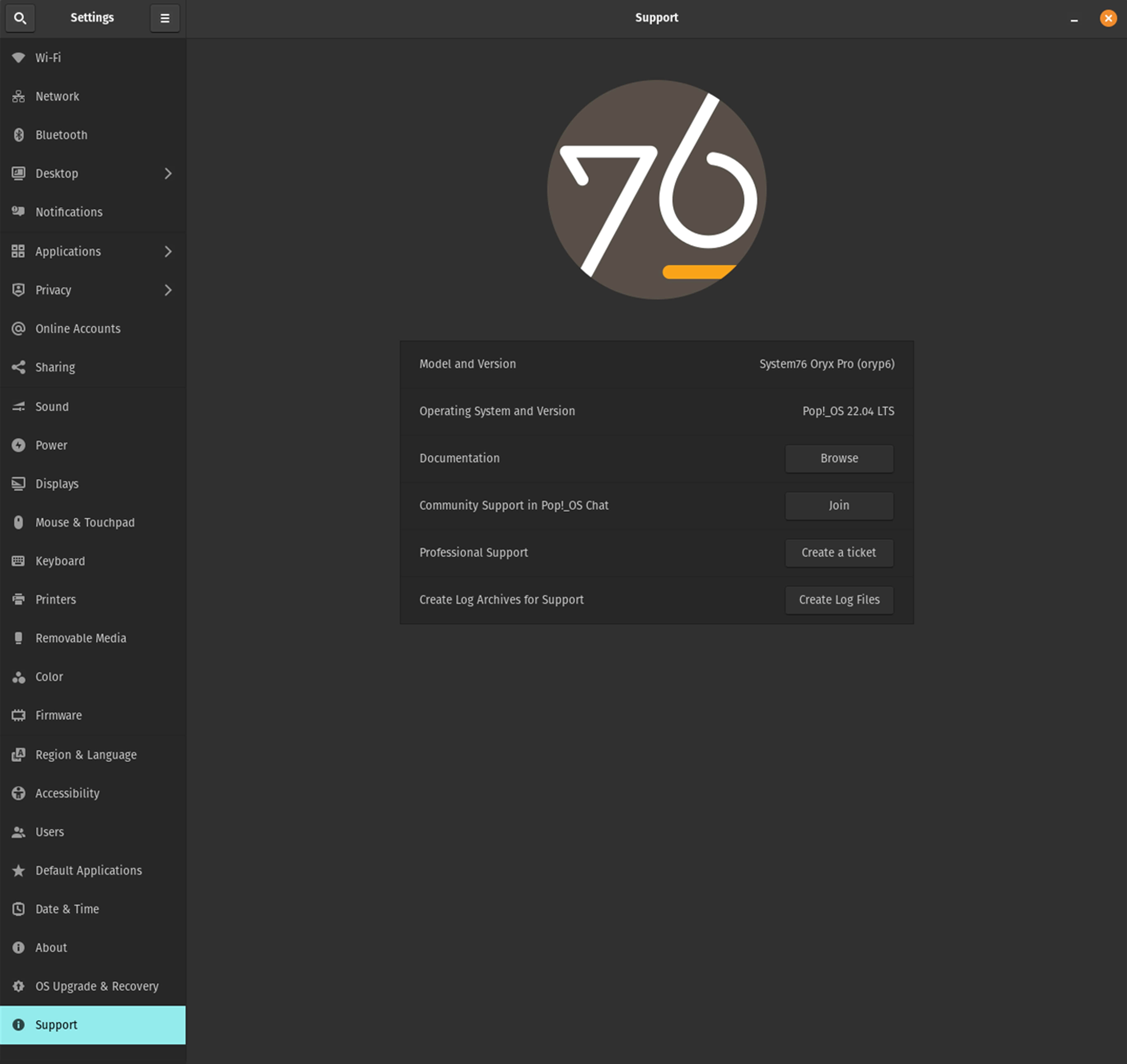 One thing that bugged me in the past with Pop!_OS was constantly getting notifications from the Pop! Shop whenever there was a software upgrade available. Well, with the new introduction of automatic updates, that’s no longer a thing. You can now schedule a day and time for the system to automatically update Debian, Flatpak, and even Nix packages without distracting you.

Note that this is not enabled by default. If you choose to update manually, you can choose the frequency with which you get notifications: daily, weekly, or monthly. 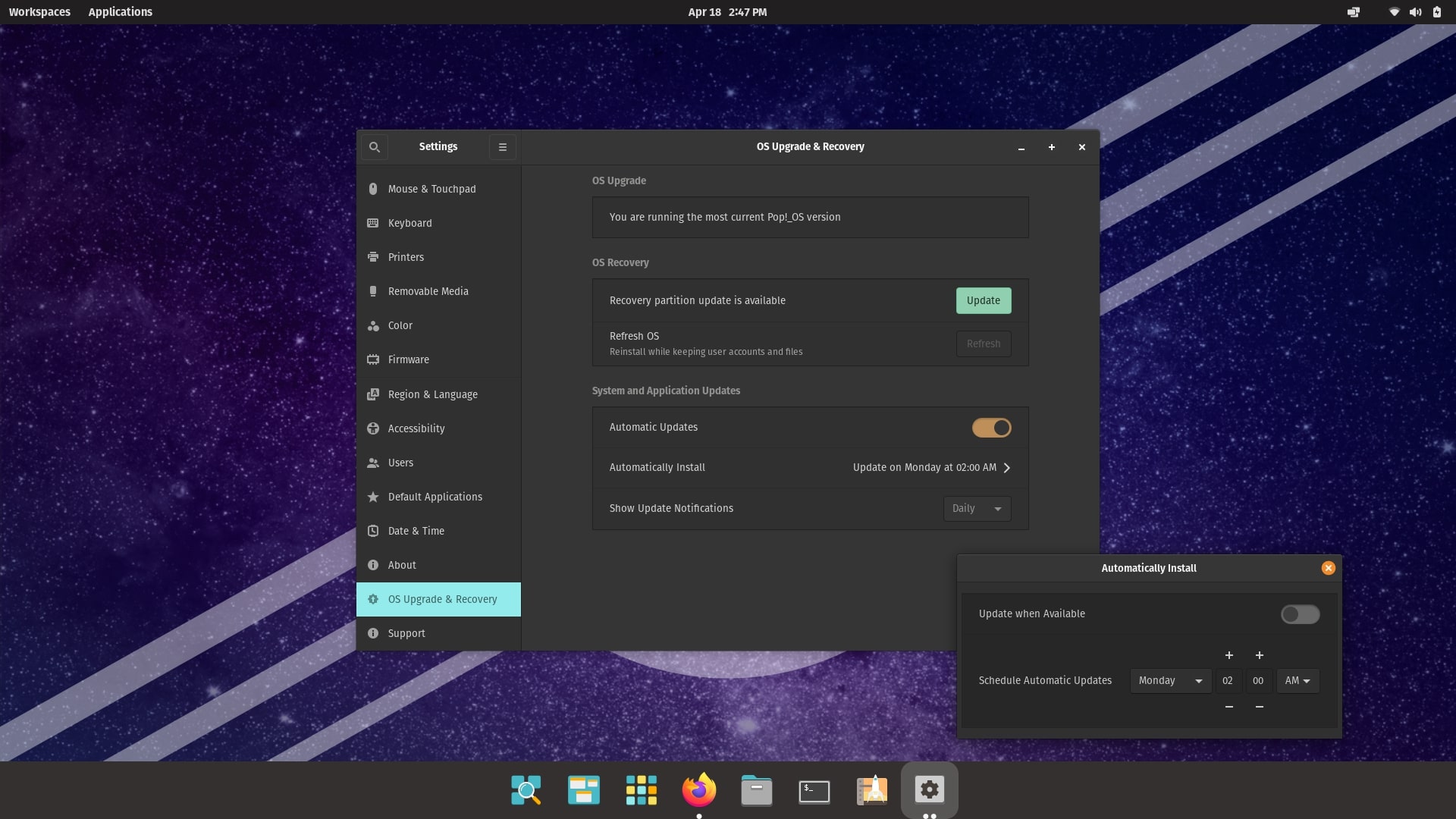 Some improvements have been made to the Pop!_Shop. In addition to UI enhancements and a overall snappier experience, the NVIDIA drivers no longer have an “install” button if they’re already present on the system. It’s also possible to downgrade the driver version here; which is a huge plus in my book as half the time I try to downgrade the driver on Arch I end up breaking my system.

Supposedly the CPU scaling governor has been improved to give better performance. The scheduler, as the press documentation brings out, “optimizes performance by directing resources to the window in focus.” This means a “much smoother” experience while gaming in fullscreen, for example.

There’s now support for hybrid light and dark backgrounds, depending on what workspace you’re using. Not everything has to be put in light or dark mode. You can now have one workspace set in light mode and the other in dark.

Laptop privacy screens are now supported. This is in addition to better multi-monitor support, increased performance while viewing your workspaces, and what was previously a bugged layout on HiDPI displays is now fixed. There are some other minor adjustments as well, including the limitation of the file size for journald logs to 1 GB, the ability to resume upgrading a Debian package if it was disrupted for some reason, .svg file type icons, RDP is set as the default option for remote desktop support, and a new user icon.

So here’s a quick TL;DR of the changes:

All of this in Pop!_OS 22.04! I’m tempted to actually wipe my Arch install with this. Download the new release from pop.system76.com. But do note that you may want to back your system up before upgrading in the event of an “extremely rare” case of data loss.

Images and screenshots provided by System76