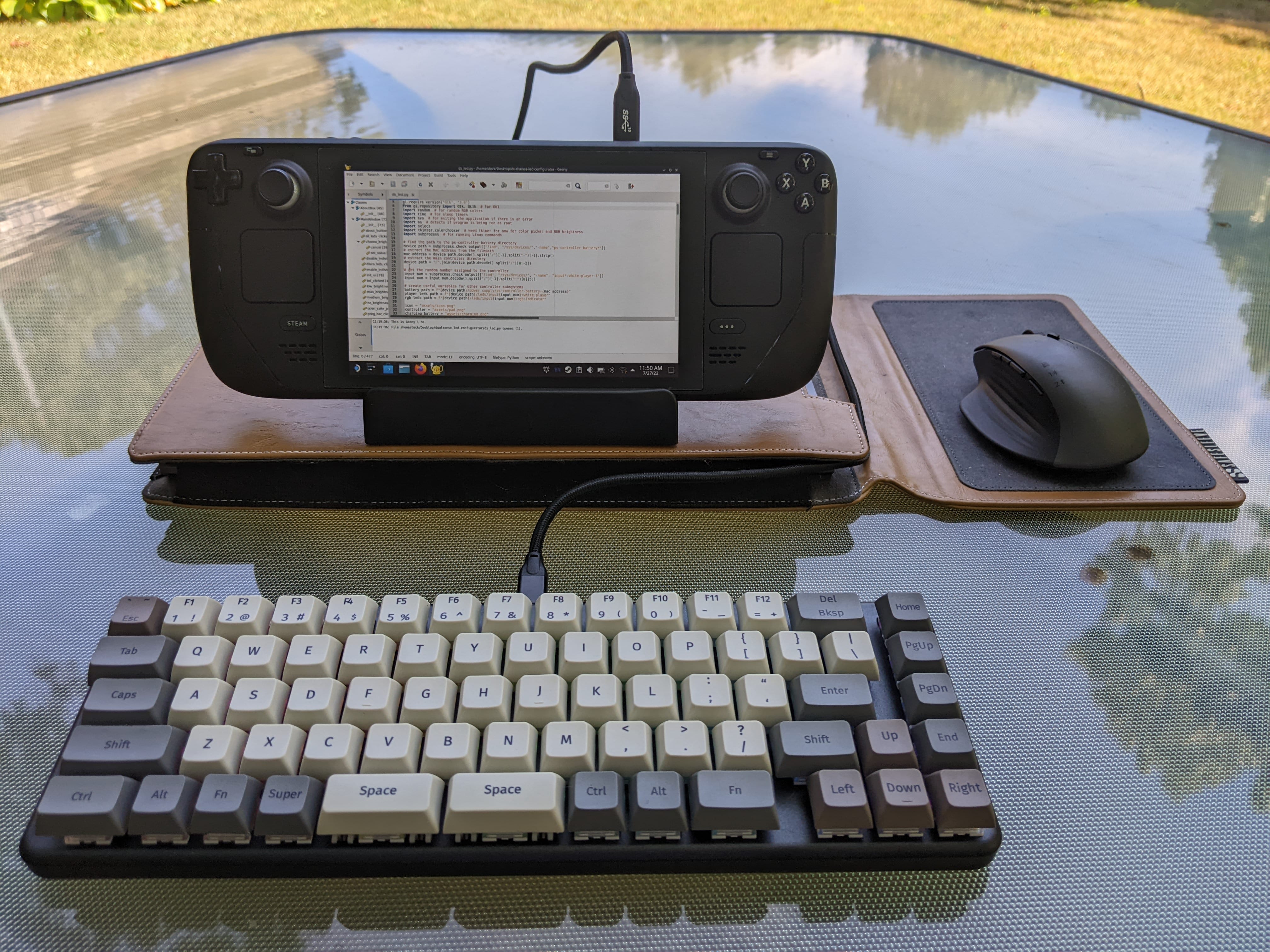 Keyboards…I’d argue they’re pretty essential for everyday life. Whether you’re a writer, a web developer, a programmer, or someone who needs to respond to an angry Twitter comment, they’re important to have. There’s arguments to be made on whether the keys should be clicky, tactile, soft, quiet, ergonomic, or how fancy the LEDs should look. Me, I’d rather just be able to type efficiently. I don’t care whether it’s loud, quiet, very large in size or small. I mean, I do care a little about whether the keyboard has LEDs, and fortunately, the Launch Lite has just that.

The team at System76 built upon an already successful product – the Launch keyboard – and made it in a way that is more affordable to the end consumer. And not only this, but they made the keyboard even more transportable than it was before. Something that already had a small footprint was made even smaller. After having the device for a week, writing posts for this site, writing some fan fiction, chatting on social media, inputting some commands in the terminal, and writing this review, here’s my thoughts on the Launch Lite. (If you want the review for the original Launch, you can read it on Boiling Steam. This time, however, we’ll be focusing on the Lite edition. And because I can keep the former, I’m able to compare directly with it.) 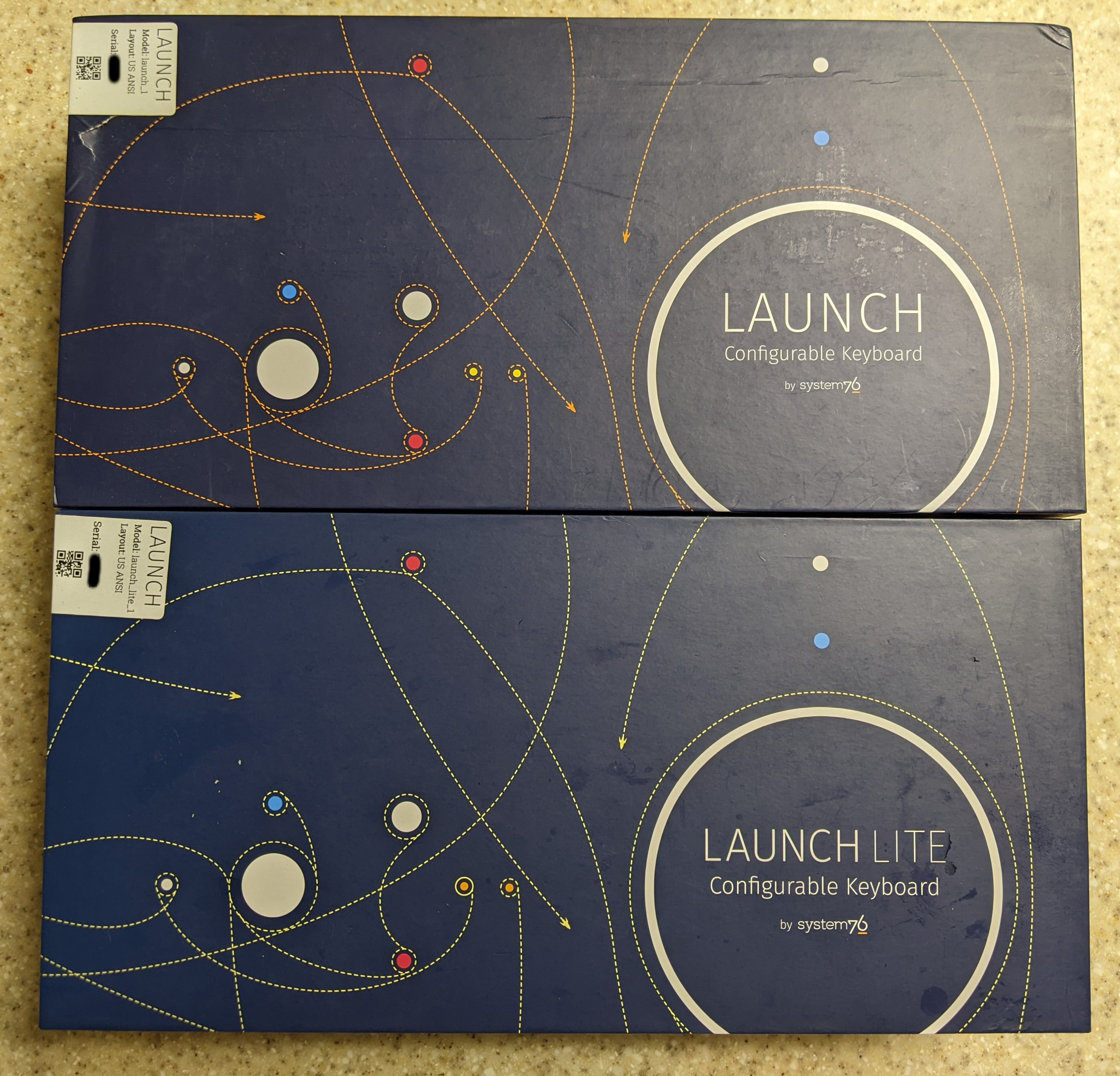 In a nutshell, the Launch Lite is much the same as its predecessor – it retains the same removable keycaps and switches, the aluminum chassis, the USB cables, the USB-C port, the keycap/switch puller, the magnetic bar that goes on the bottom to give the keyboard an elevated position. The boxes in which both keyboards come in are also nearly identical, albeit the Lite version says “Launch Lite” and the color of the sticker on the side is brown. Nothing else is different as far as I can tell. But in regards to the keyboards themselves, there are some differences on the Lite edition:

That last bullet point in particular is of great interest to me. I had previously complained about the price on the original Launch being too expensive, and I’m glad to see System76 listening to customer feedback and providing something that’s more affordable. And what’s great is you still get much of the same product in the end.

When System76 offered me a review unit, they asked what kind of switches I wanted. There’s four different ones available: the clicky Kailh Box Jade, the tactile Kailh Box Royal, or the silent Kailh Box pink or brown. I told them I didn’t have any sort of preference, so I ended up getting the silent brown switches. I do appreciate the fact that the box that I was sent was not their typical large white box – it was a smaller, brown-colored one.

Typing feels good on this. It’s definitely quiet, that’s for sure. Nothing like the clicky switches I was given with my review unit of the HP Dev One. I honestly think I like them both – I like the clicky-ness of the original, but at the same time I also appreciate the quiet switches. The latter in particular will definitely be of help if you are around others and don’t want to disturb them.

One thing that you’ll certainly have to get used to, however, is the fact that there’s one less row of keys. To keep the footprint smaller, the Function keys are on the same physical key as the numbers. So in order to press F5, you’d have to hold down one of the Fn keys and then press 5. The slanted apostrophe and tilde characters are combined with the Escape key. Inserting the slanted apostrophe character requires holding down Fn and the Escape key, and inserting tilde needs Fn + Shift + Escape. If you’re typing in file paths a lot, or you’re pasting in code snippets, this is going to be a bit of a nuisance, and will slow your typing speed down. Also, the Delete key has been combined with Backspace – pressing Delete requires the Fn key.

This being said, however, you can always make use of System76’s keyboard configurator and customize the way the keys behave. On Linux, you can run this app across virtually any distro thanks to the AppImage they provide. What’s great for Arch users like myself though, is it’s available in the AUR. 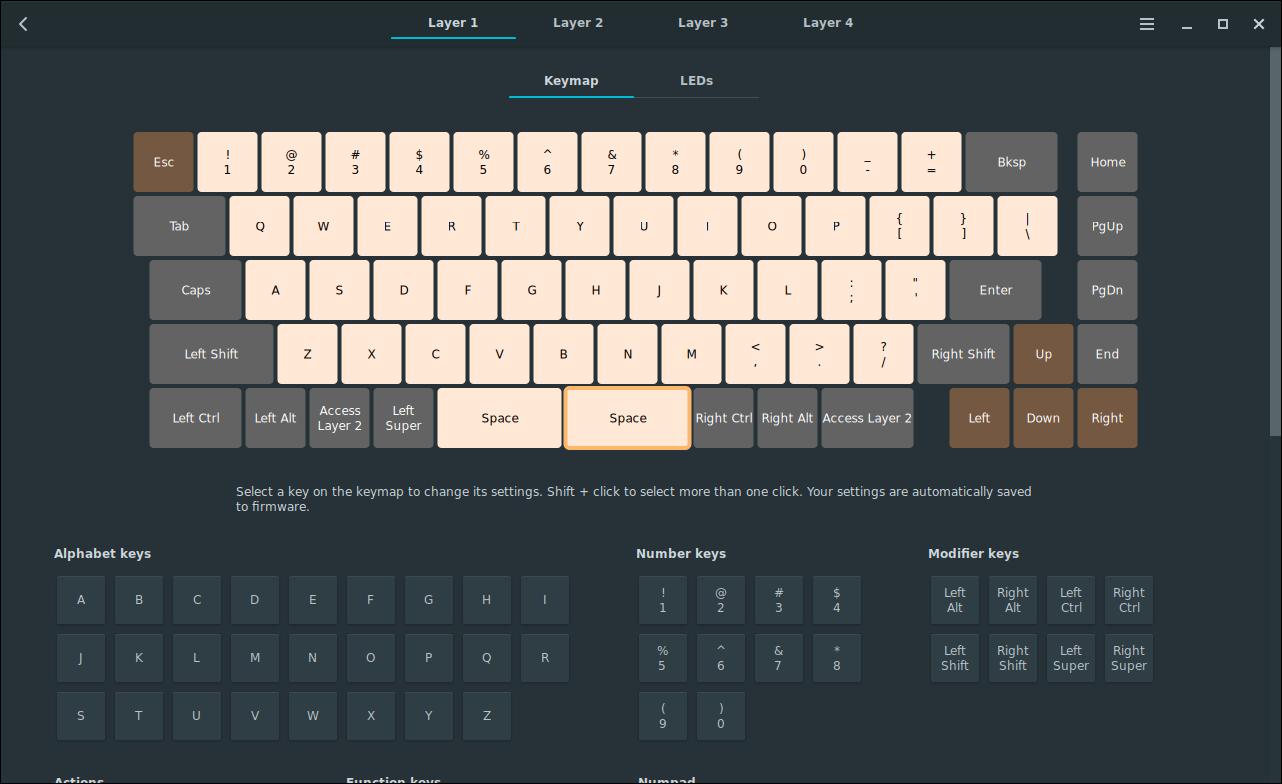 I’m not going to get into the mind-numbing amount of ways you can customize the keys with the app, but let me just say this: you can have up to four layers at once, and by default two are used. The second layer is activated when one of the Fn keys is being held down. Keys can be configured to act as a different key press, or they can perform a function like pause/play a track. One popular example is the fact that there’s two Space bars on the Launch and Launch Lite. If you want, you could configure the right Space bar to act as the Backspace key. You can then take that key out with the keycap puller, and put Backspace in its place.

The switches themselves can also be replaced, should you have another set of switches available. Nice that I don’t have to buy a whole new keyboard if I wanted a clicky version; I just need to buy the switches. 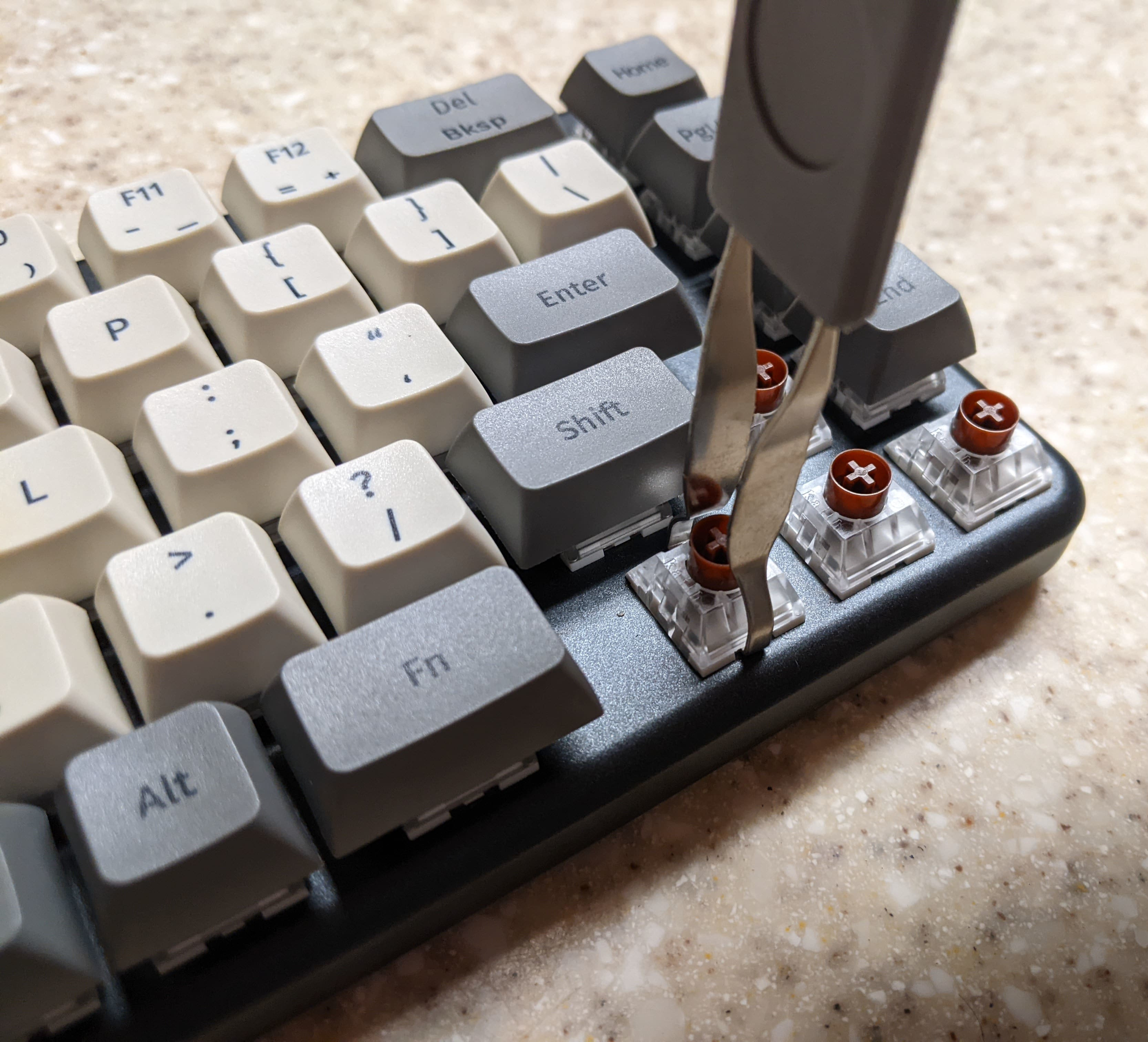 If you don’t like the color of the keycaps, you can replace a few of them. You can replace the arrow keys and Escape, for example, with red- or blue-colored keys. What I find odd, however, is that these are pretty much the only keys that can be replaced with a different color. It makes the coloring scheme on the Launch look very odd and inconsistent. Perhaps that’s set up intentionally so people can more easily distinguish the letter keys from Caps Lock, Shift, Control, Alt, etc.

A lot of keyboards tend to not have a separable cord. Like my Corsair keyboard, for example. But what I like about the Launch/Launch Lite is the cord is detachable on both ends. It makes transporting it a snap. I can practically fit this thing in my pocket! And you can use either USB-C to USB-C with the cable they provide (perfect for Steam Deck!), or USB-C to USB-A. It’s pretty neat. 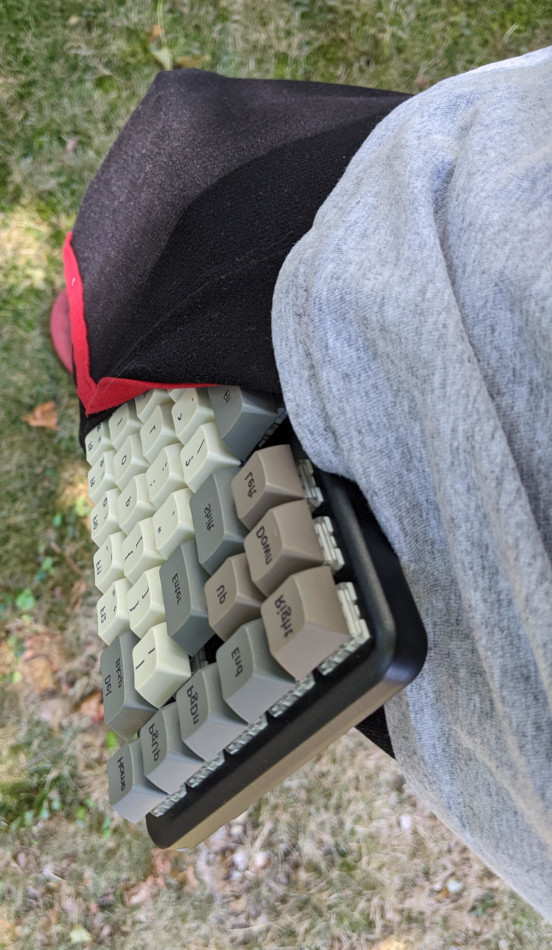 System76 makes it very easy to take the back cover off. Just four Philips screws. It’s half the amount of screws to unscrew in contrast to the original Launch. Pulling out the PCB requires taking out all the keycaps and switches. For the sake of this review, I’m not going to go to that extent, but I can at least provide you a glimpse of the back of the PCB. 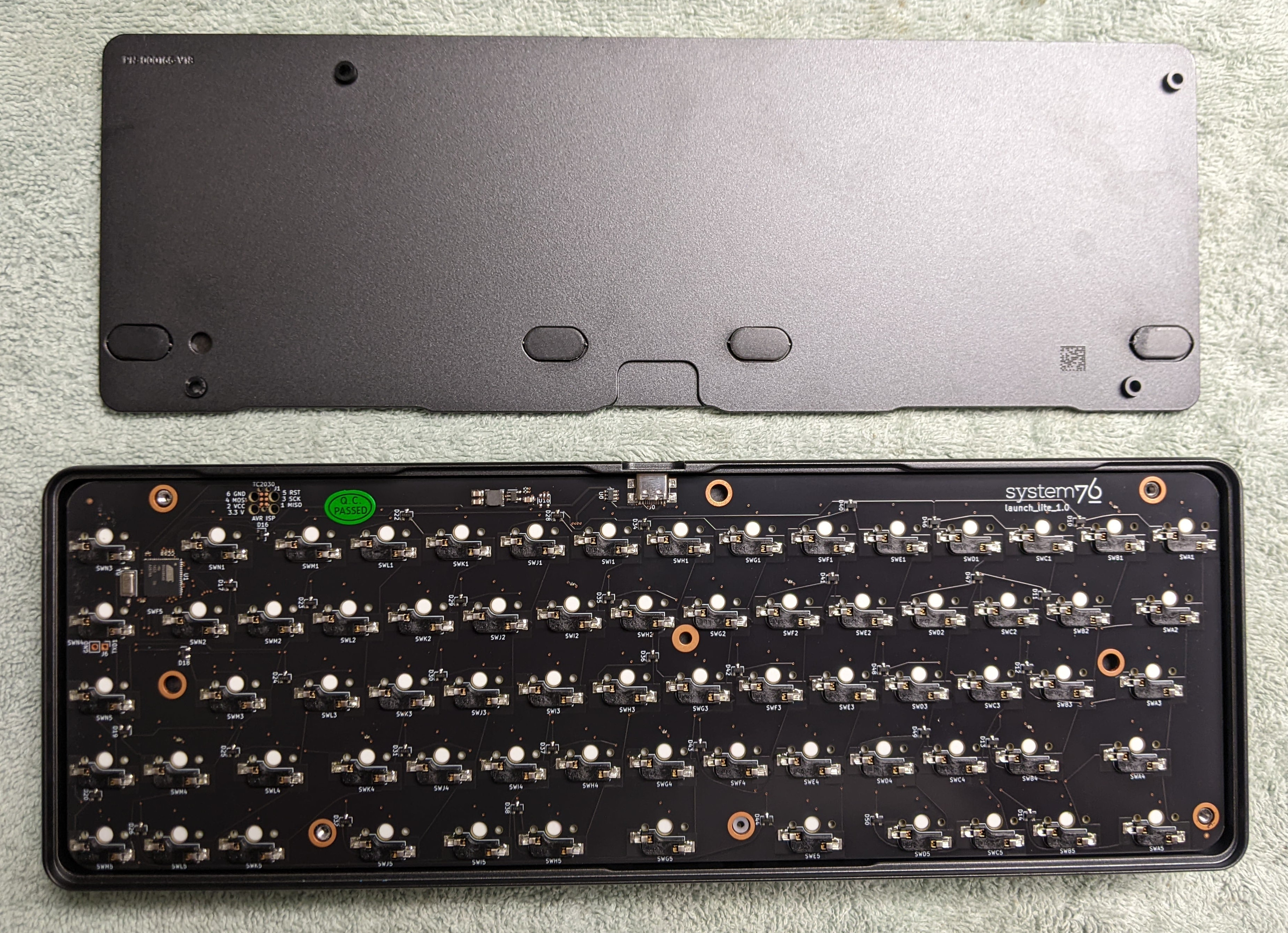 If System76 ever decides to create another model, I’d love to see wireless Bluetooth integration. It would just be a nice feature to have for those who don’t want to have to mangle around with cables.

So what are my overall thoughts? I like the Launch Lite. Typing is a breeze on this. I never really made use of the additional USB ports on the original Launch, so the fact that they’re not here on this unit doesn’t bother me at all. I like how System76 made a keyboard that barely had any extra footprint even smaller while retaining the same keycap size. You can practically put this thing anywhere and have it not take much space at all. 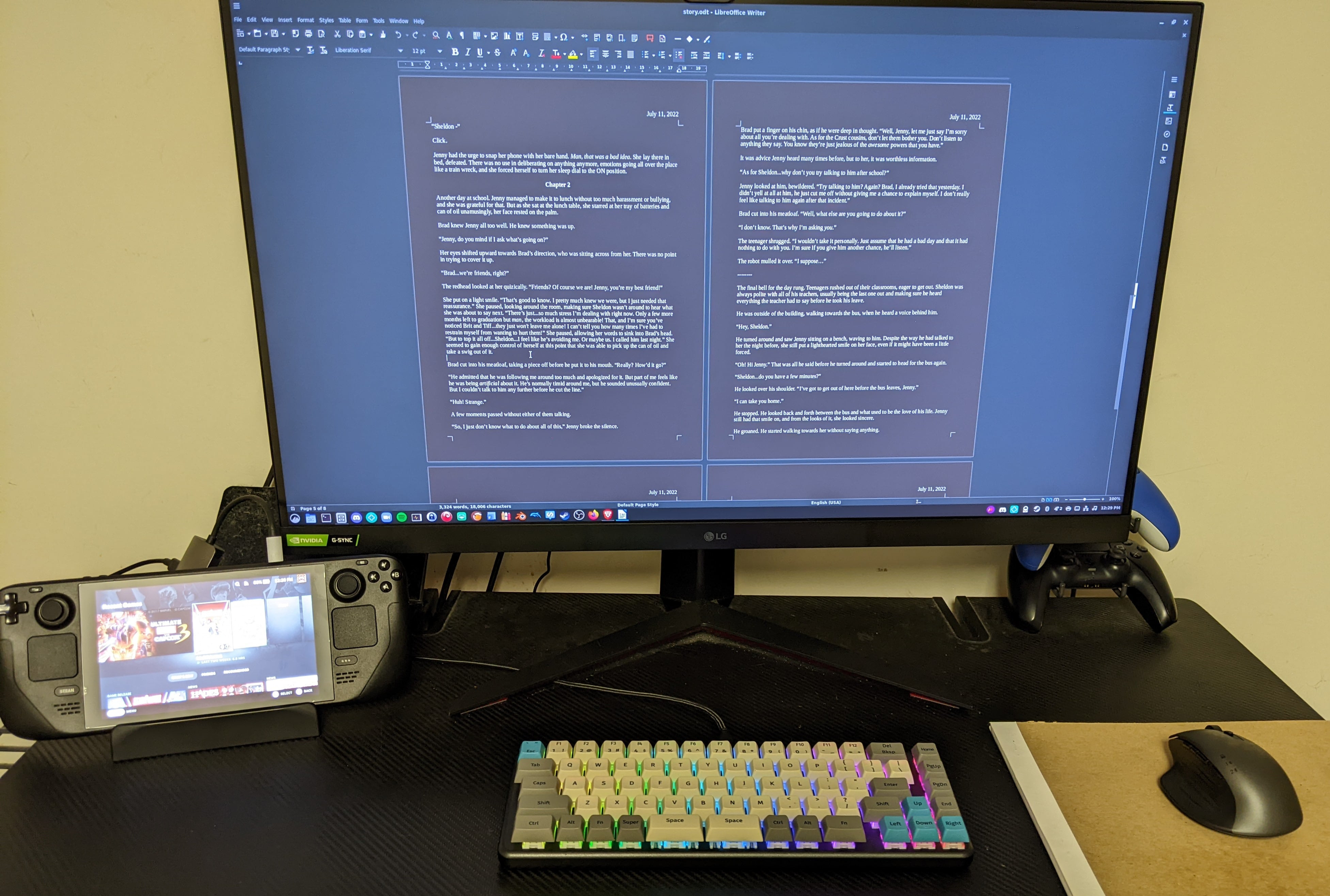 The combined top row of keys is going to take some time getting used to, but if that’s how they can make the keyboard more affordable, I’ll take it. The coloring scheme with the keycaps is a bit odd to me, but I generally don’t pay attention to it as I’m typing. If you’re interested in buying one, head over to the store page. Price starts at $199. 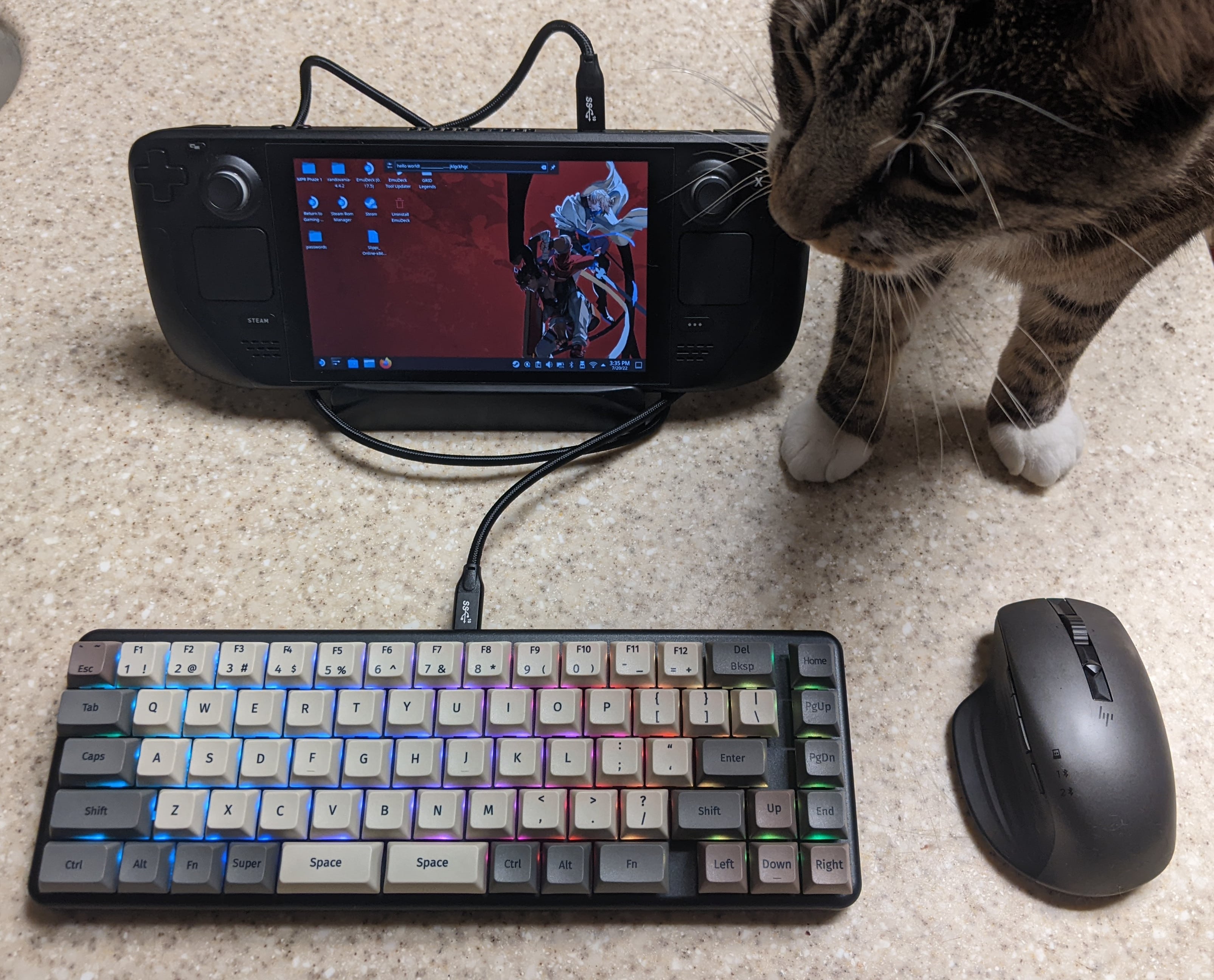 Review unit provided by System76. Opinions are of my own.