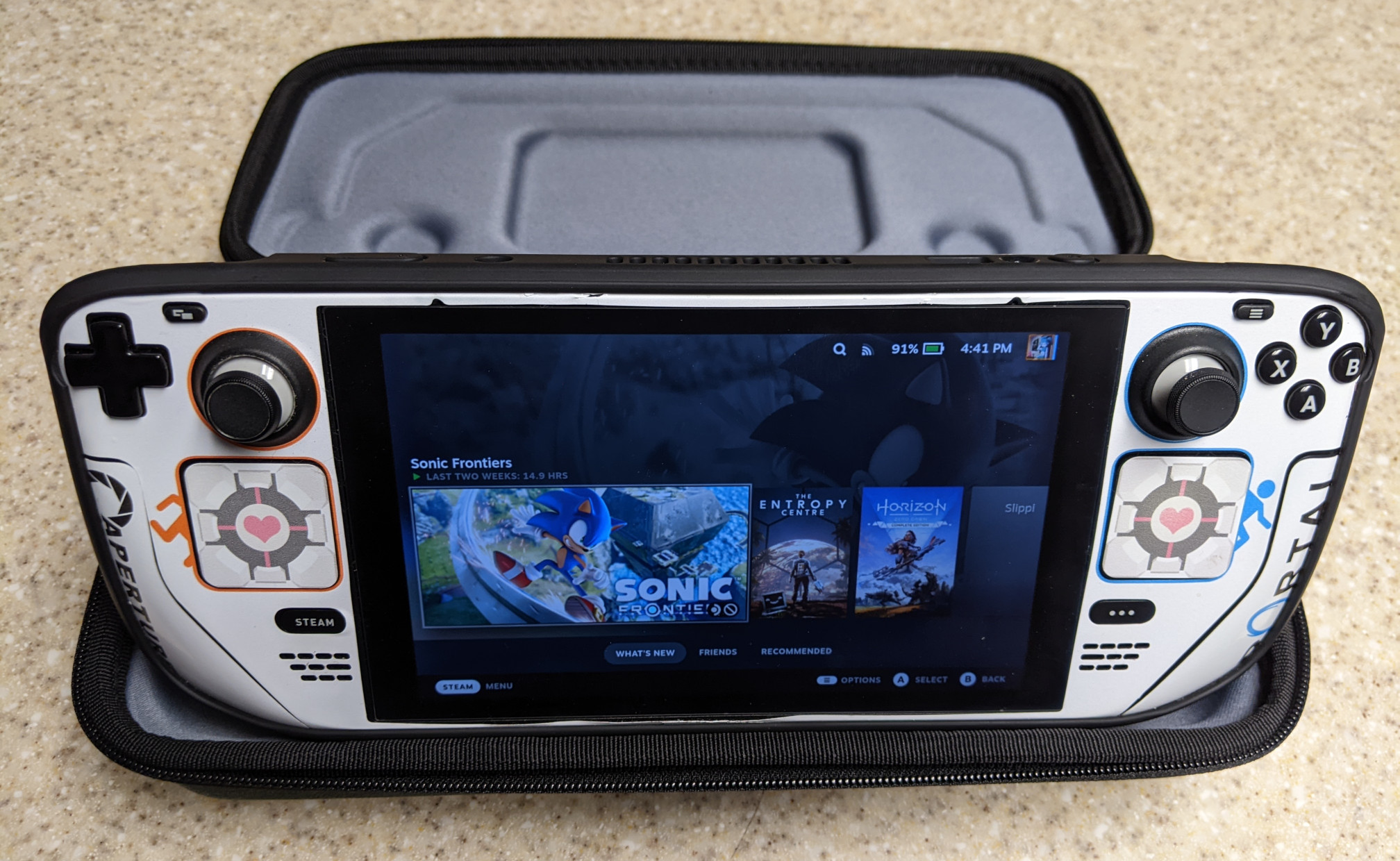 It was nice of Valve to include a carrying case with their Steam Deck. There’s nothing wrong with it; it perfectly does its job. But if you something a little extra, it’s definitely worth having a look at JSAUX’s case.

It comes in a nice gray color, made of oxford cloth. Minimal branding; just the “JSAUX” text on the lower-right and nothing else. Just how I like it. There’s a yellow-colored case that’s set in similar vein to a Steam sale. Yuck. To give you an idea of what oxford cloth feels like, think of it as a similar material that the vanilla Deck case has, albeit a little more rough. All the while it’s right around the same weight as the vanilla case – I don’t have a scale here to compare weights, but they feel very similar.

Dimensions of the case are as follows:

It’s very similar in length and width to the original case, but where it differs is the height. It’s a couple of inches thicker – this allows the case to carry accessories in addition to the Deck itself. This bottom compartment allows you to add a power bank, a charger, earbuds, cables…pretty much anything you can think of.

A caveat is this compartment doesn’t make room for much. It’s only 6.7" x 4.3" x 1.38". When I put my power bank in there, I can’t fit anything else other than the USB-C cable that it needs. On the other hand, if the accessories are small enough, you could sneak in the official charger, a smaller power bank, and maybe even a charging case for wireless earbuds.

But there’s more than just the bottom compartment. There’s also a folding piece where you can fit up to five full-size SD cards (probably would be great for physical Nintendo Switch cartridges as well). Below that is a mesh pocket that you can hold other things – like charging cables, for example. Only complaint here is the “slots” where the SD cards go. These need to be full-size in order for them to properly fit, without them fiddling around. If you put in just a MicroSD card, it will be too small and won’t fit snug. I wouldn’t imagine most people these days carrying around with them the full-size cards anymore, even if they are adapters for the MicroSD versions – most devices will use just the MicroSD version, just like the Deck. Also, make sure whatever you put in the mesh pocket isn’t too thick. Otherwise, the flaps won’t fold properly when closing the case.

A neat feature is one of the flaps also doubles as a sort of “kickstand.” You can fold it in a way that gives the Deck a comfortable place to rest, while giving you a good viewing angle. It’s a little wobbly, though – don’t go too crazy if you’re planning on gaming this way. It’s great while using the Deck in Desktop Mode with a keyboard and mouse, however.

When you put the Deck away in here, the two flaps go on top of the screen. The fleece material will not only protect against screen scratches, but the velcro connection will keep it secure in place. So, say for example you forgot to close the zipper. Then you pick the case up. The Deck won’t fall out! Very clever; works very similar to the Lifesaver accessory. I can also confirm the Deck still fits pretty well in here with the silicon cover that I have.

Here’s yet another feature. The case uses a “thickened EVA (ethylene-vinyl acetate) shell” for shock resistance. Again, I’m not going to be putting this to the test, but I have reason to believe the material will certainly help with shock absorption, should I ever drop it. The handle for the case is also a little nicer than the one the vanilla case has; it has this groove that makes it easier to carry. The zippers themselves are almost exactly identical – same color and shape.

The box for the case is advertised as being “wear-resistant.” Supposedly the “concealed chain” prevents rust. I kind of just shrug my shoulders at that. I mean, if the case is still in the same shape ten years from now, I’d have reason to believe the claim. But it’s nice, I guess.

So is it worth the upgrade? Absolutely! In addition to being able to carry your Deck around, you’ll give it extra protection with the EVA shell. You can also conveniently carry other accessories, including headphones, chargers, SD cards, power banks, etc. The fleece flaps allow the case to be used as a kickstand, while also properly securing the Deck in place to prevent accidental drops when the case is unzipped, and protects the screen from scratches. It’s an awesome case, overall. Just know there isn’t much that you can carry in the bottom compartment, depending on the size of the accessory you’re putting in. In a future model I’d also like to see the “pockets” a little more narrow so MicroSD cards can fit nicely; they’re currently for full-size SD cards. 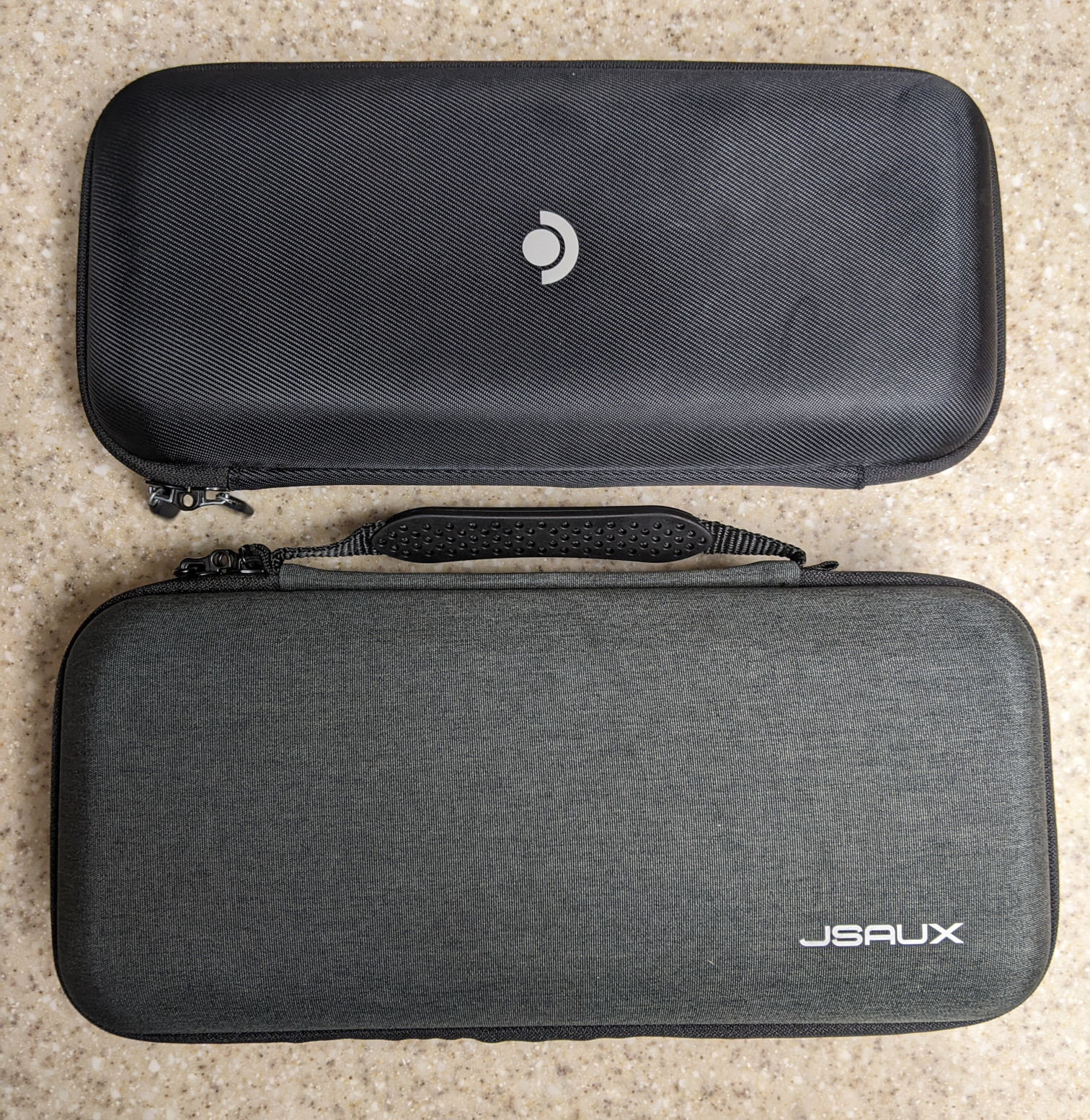 The JSAUX case is available on the official website and Amazon. I certainly think the $24 is worth the asking price!

Steam Deck case sent courtesy of JSAUX. Opinions are of my own.