JSAUX was kind enough to send their clear case (or shell) accessory for the Steam Deck over for my review. Here’s my thoughts. Unboxing and installation video is available on YouTube.

Basically, as the name implies, the clear case allows for transparency on the back of the Deck. This allows you to see the internals of the hardware as the Steam Deck is running. JSAUX apparently left their branding on the shell at first, but they decided to remove it after listening to community feedback. That’s pretty nice of them to do that.

The company will also be releasing different color variations in April. They conducted a poll over on Twitter with four options: purple, blue, orange, and green. The top two votes are the ones that will be produced. So it looks like we’ll be getting purple and green color variations in the next few months. Great to see the purple one getting made; it reminds me a lot of the GameCube days. It’s more than just a transparent shell though. It also comes with its own thermal grease and heat-dissipation aluminum sheet “that enhances heat-dissipation performance.” Add to this three different back button sets, depending on your tastes. Each set has their own height.

While the case itself has the branding removed, it’s still on the photo of the box. But inside the box there is: 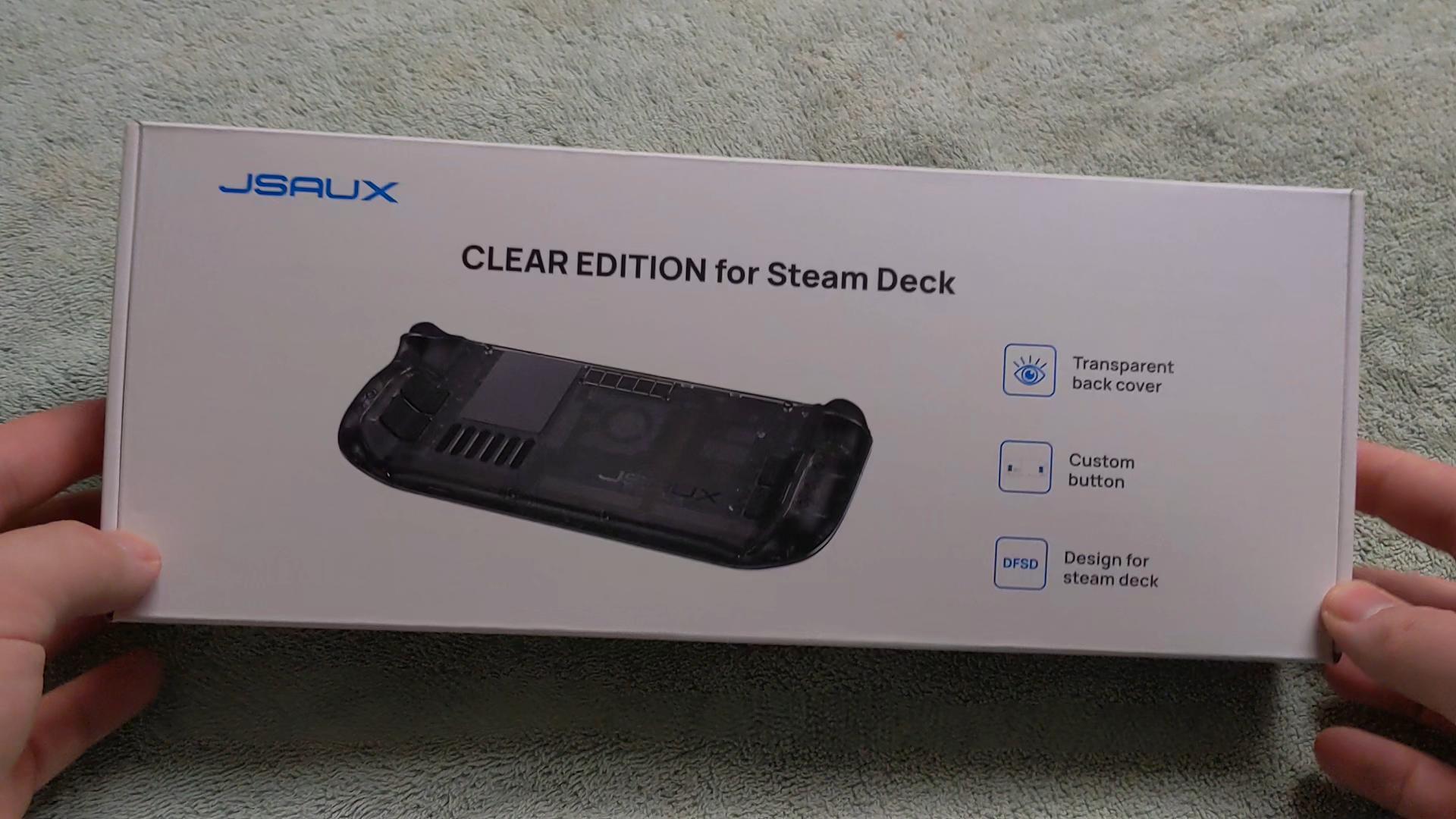 Although you probably have a screwdriver lying around already for the Deck, this screwdriver in particular is a little smaller – since the screws that go into the shell are also smaller. It’s nice that they provide the stick as well, for making it easier to pry the back shell off. 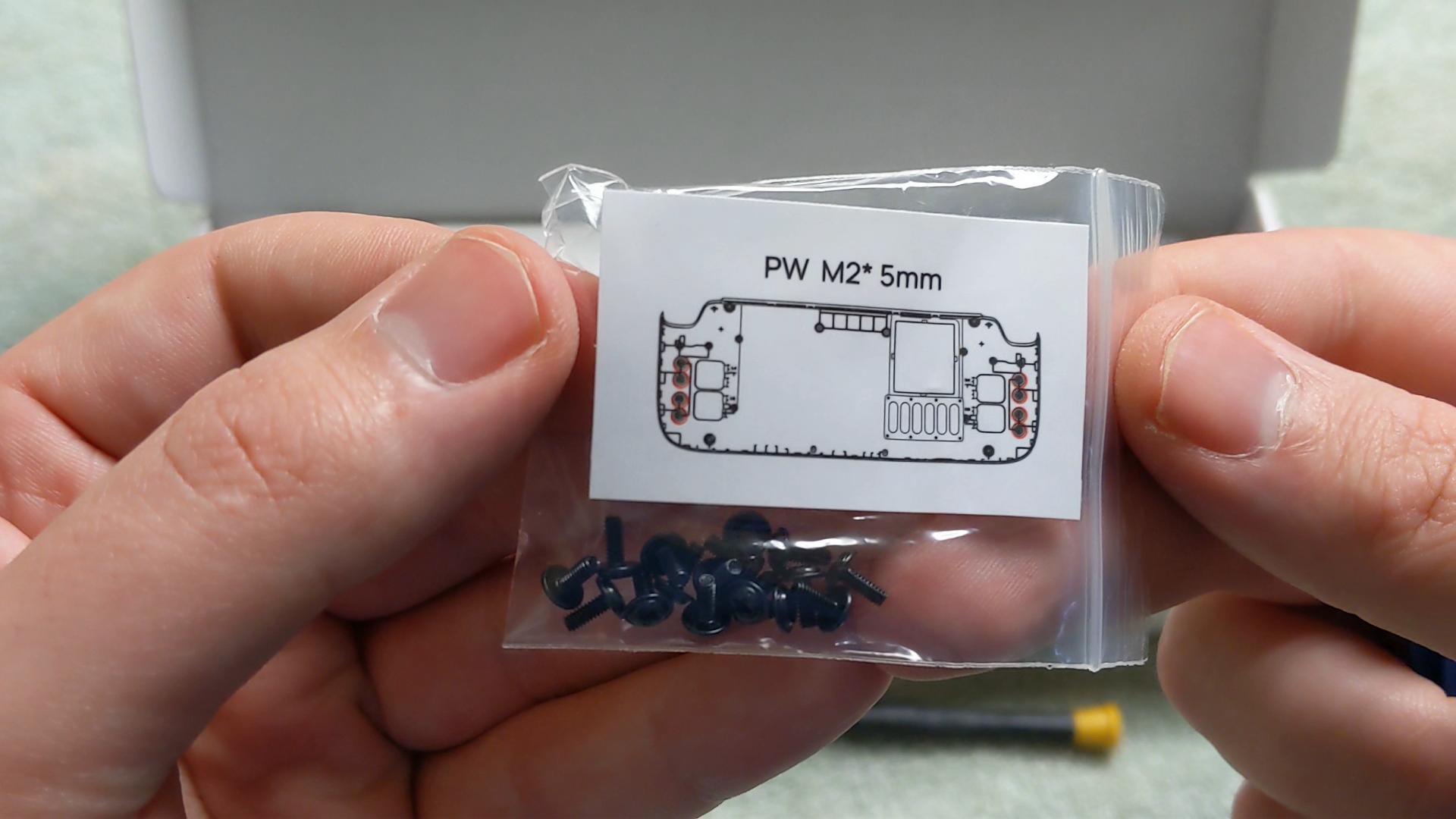 Then they have the “finger gloves” – this apparently prevents smudges and static from leaving your fingers into the Deck’s hardware. You put them on your finger and then roll it down. Kind of wish I knew about this earlier; I would have used them while I was taking the back shell off. I wonder why they didn’t just supply gloves entirely rather than the individual finger gloves. Probably to save costs or keep the package size small. Would be a lot less work putting two gloves on than ten. I guess hand size probably matters as well, so the finger gloves was probably a “one size fits all” solution. 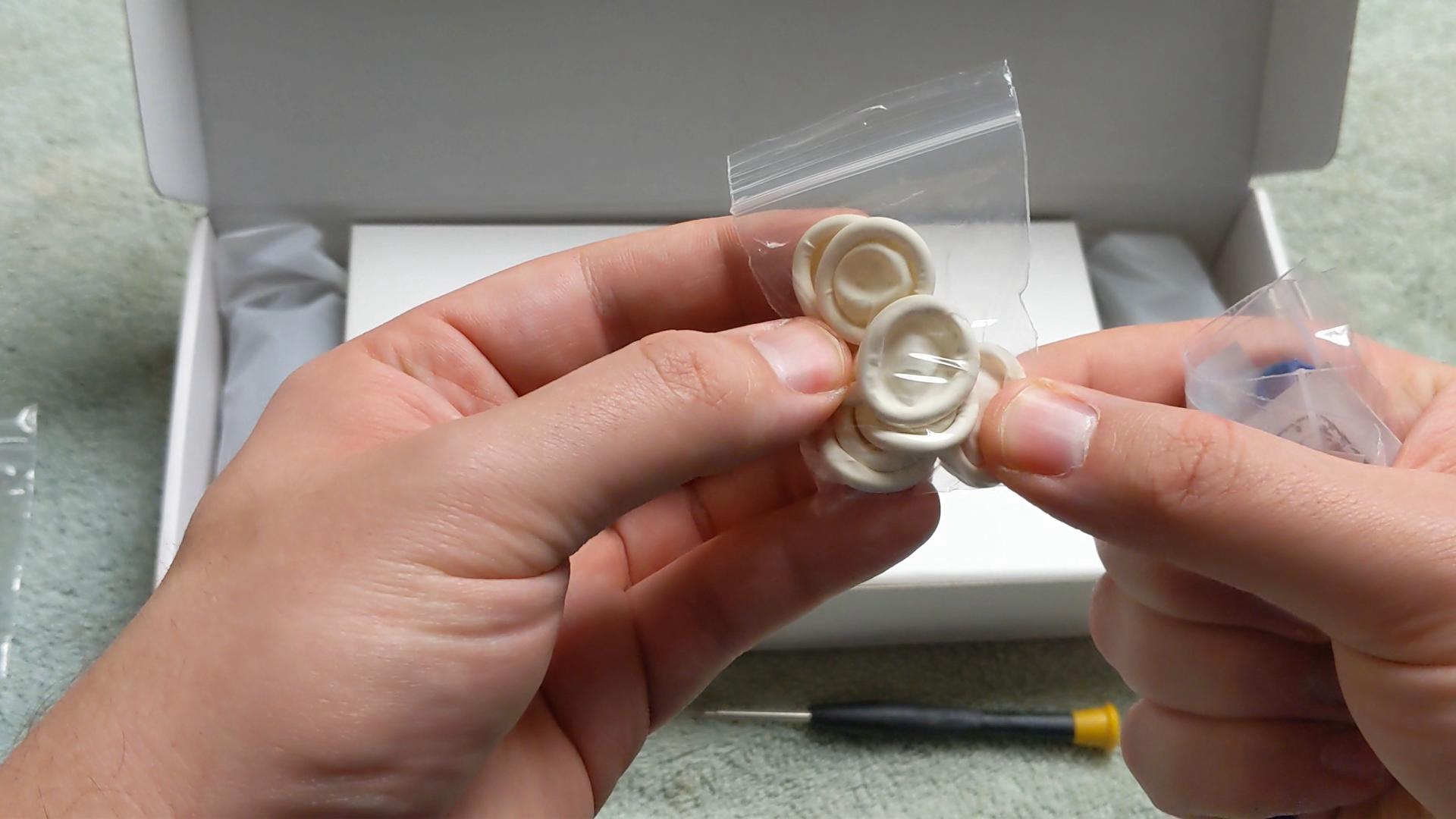 Putting the clear shell on the back of the Deck is very similar to the original shell. In fact, the clear shell also has the four inner screws that are a different size than the four outer screws. Only exception is the screws are a little more narrow.

But before you take the original back shell off, make sure you take the MicroSD card out if there is one inserted. Last thing you want to do is break the card while disassembling the shell.

In the box you get three different sets of back buttons, each with their own height. I’ll try my best to explain what each one does:

Four screws go on each side of the shell to keep the back buttons secure. So you’d do this before attaching the shell to the back of the Deck. And make sure the button clip goes under the clips that are on the shell; otherwise the back button won’t be registered when it’s pressed.

From there, you can secure the shell as you would the vanilla shell – screw in four inner screws with the appropriately labeled plastic bag, screw in four outer screws with a different bag. An extra screw is provided in each bag – definitely useful, all too often I end up losing screws since they drop to the floor and I can’t find them… 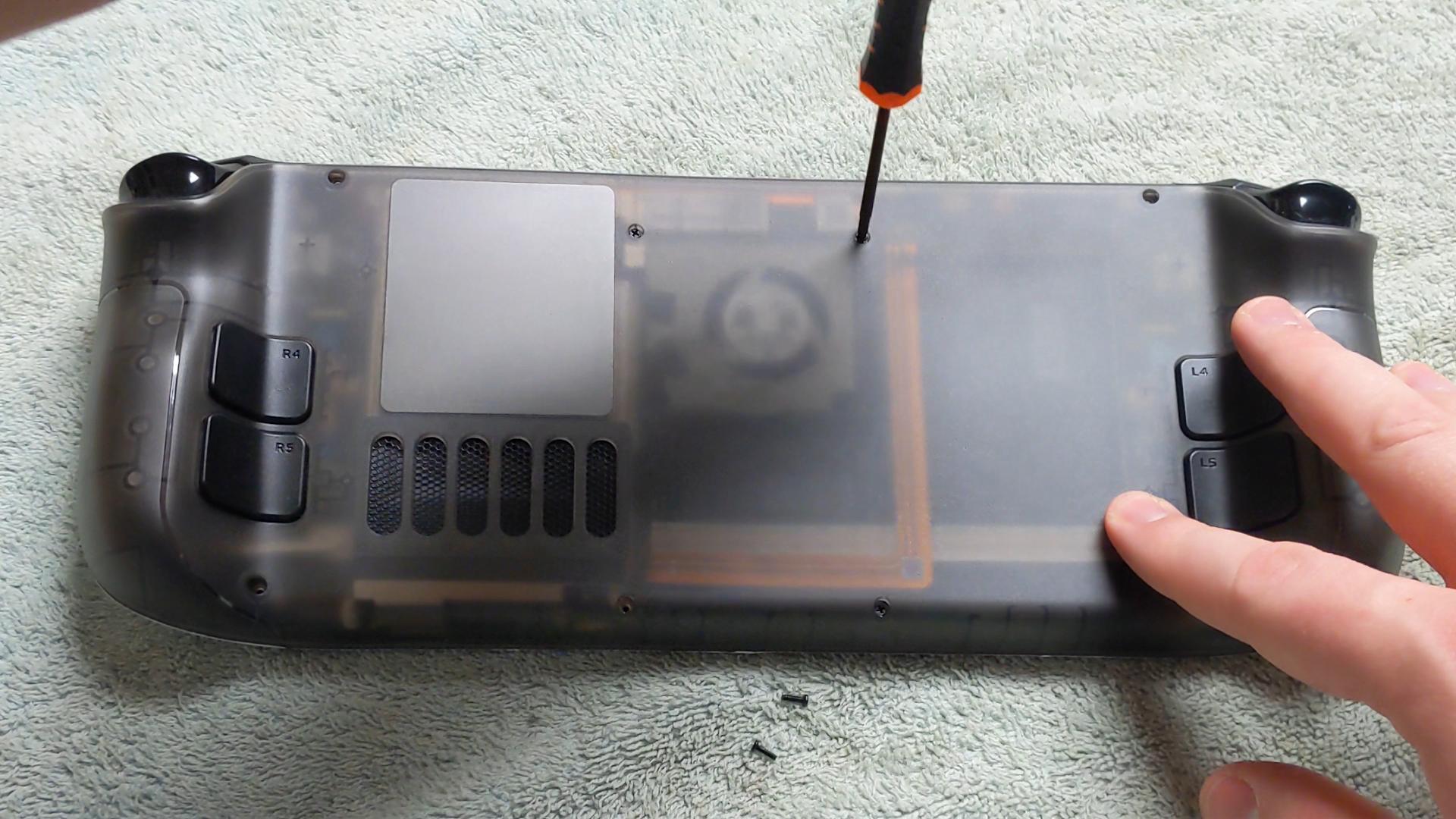 Not much to say here as to how the clear shell feels. According to the specs on the store product page, it’s made of polycarbonate and aluminum alloy. If you don’t understand those big words, don’t worry; I don’t either. All I can say is that it feels similar to the original back cover. So I have neither a complaint or a compliment here.

I like the fact that there’s three different sets of back buttons that you can use. There’s the vanilla one to keep it the way it was before, a click-y set, and a “squeaky” set. I personally prefer the click-y one – the “low” set. I like the sound it makes when pressing. But an unfortunate caveat is this set does not work with the JSAUX ModCase, since the buttons are too long to fit inside the opening. The vanilla and “high” sets will fit just fine though. The click-y set also may be a bit too easy to accidentally press one of the back buttons with this on. I’ve settled with the “high,” squeaky set for now. Not as nice of a touch as the click-y set but certainly better than the vanilla. 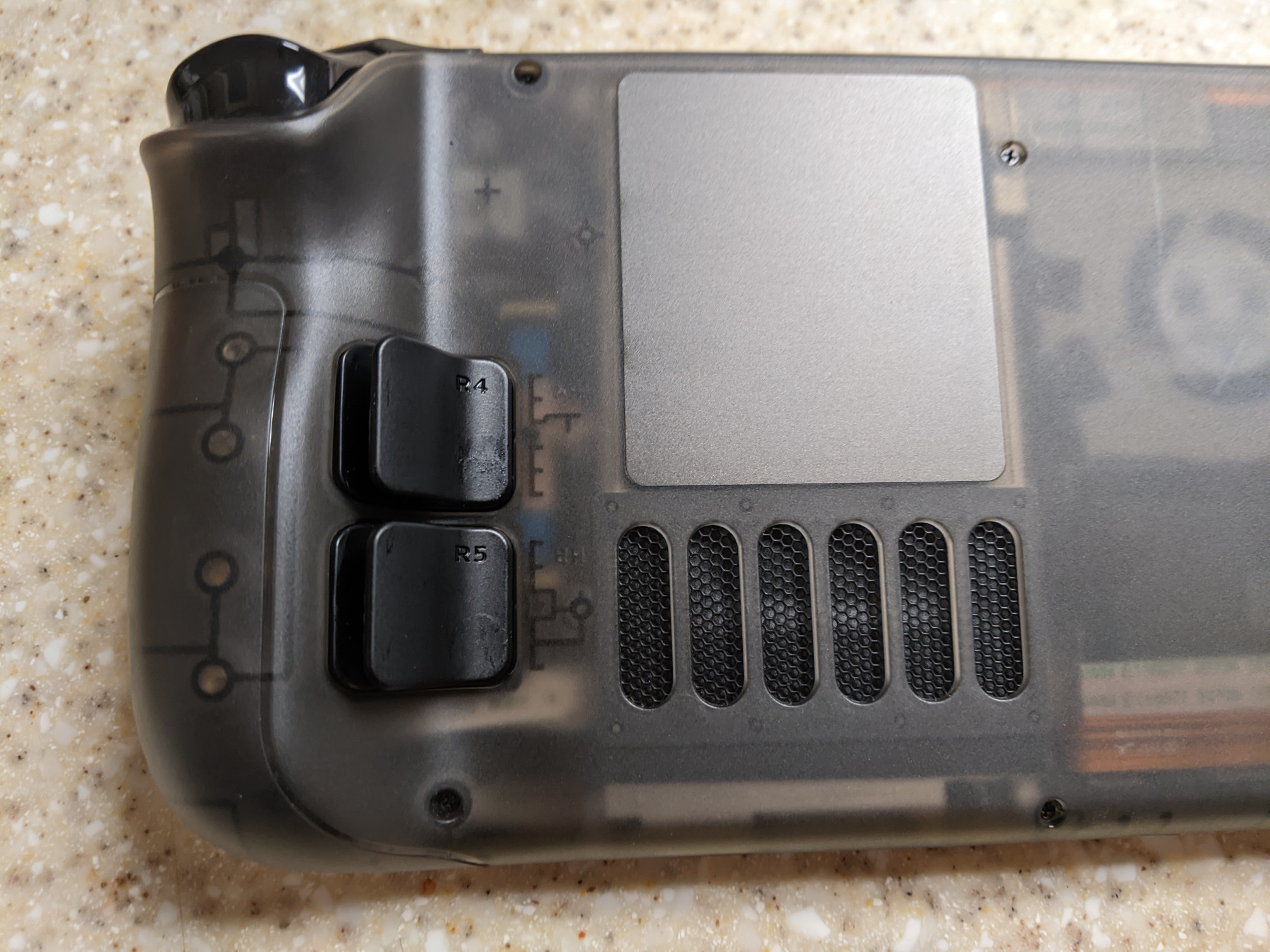 Not a fan of the stickers that they slapped on the back buttons. They’re color-coded so you can tell which set belongs to which, but at the same time, they’re not pretty. You can of course peel them off, but now you have to clean them up to get rid of the sticky residue they leave behind. 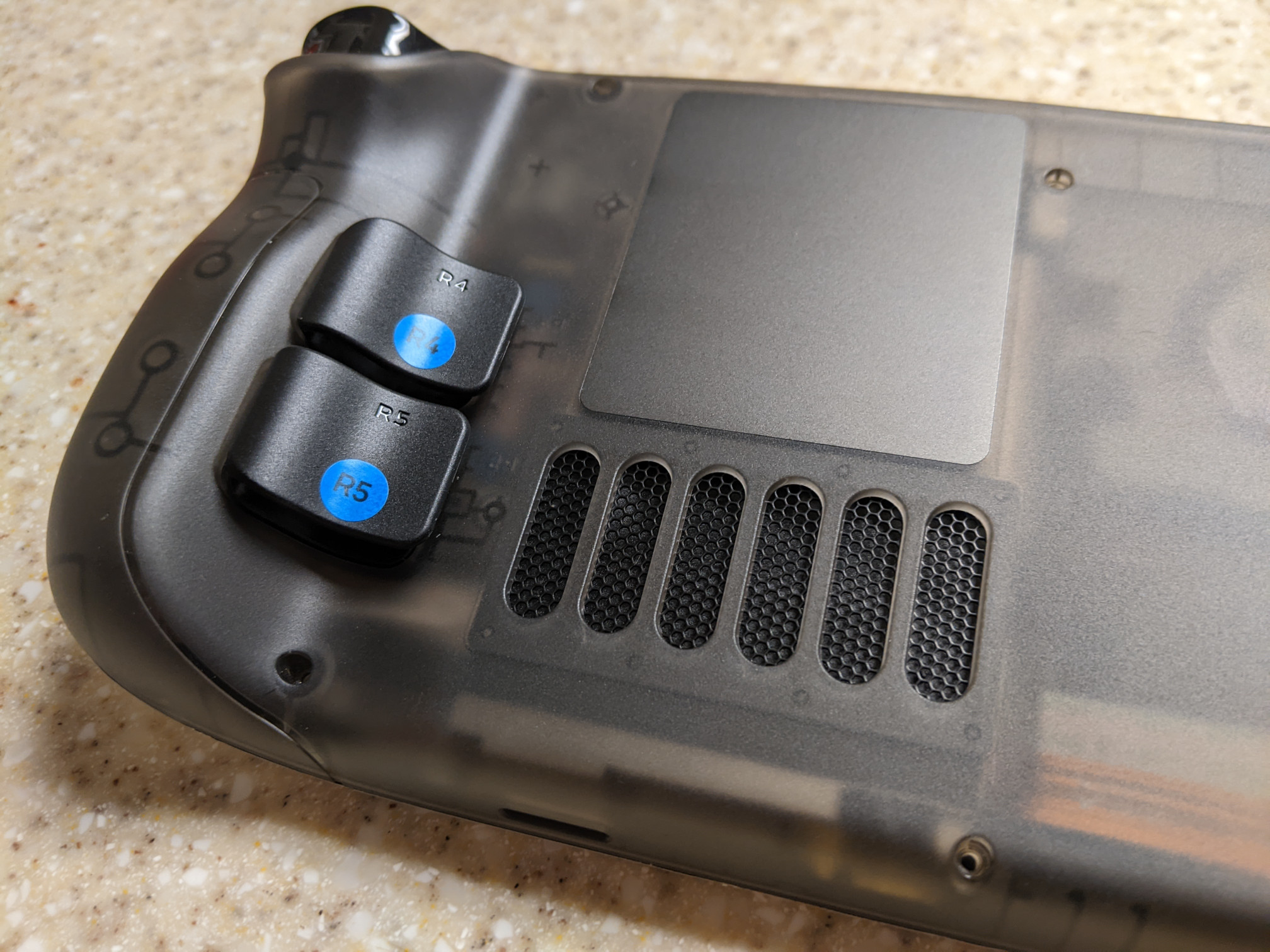 I left Gotham Knights running for a few minutes on low settings and framerate cap set to 60 FPS. And wow, JSAUX isn’t lying when they say the aluminum area (above the vent grills) can potentially cause burns:

Because aluminum has good thermal conductivity, it will be hotter than other areas when touched. Be careful not to touch it to avoid being burned when you use your Deck. 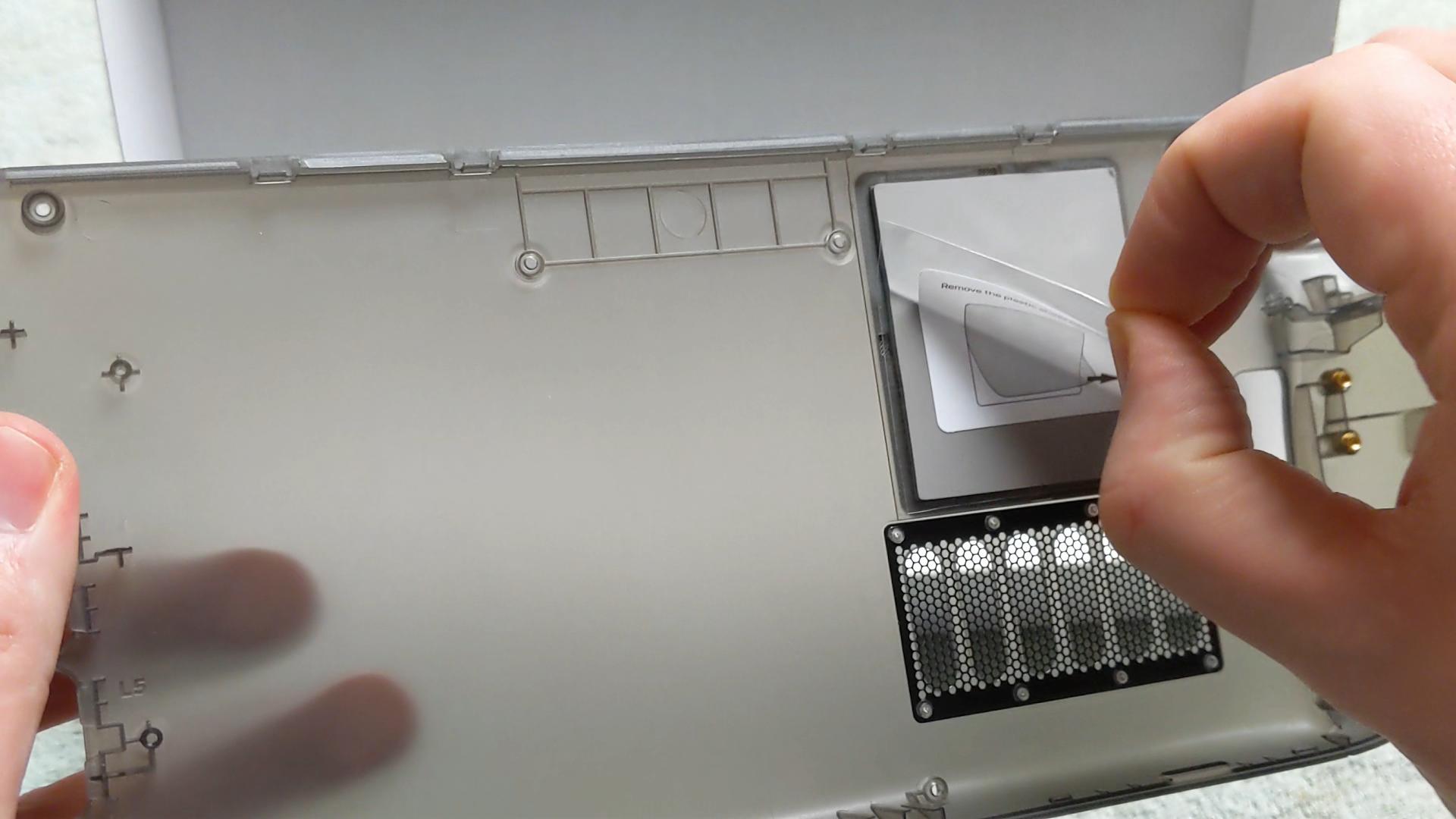 Hold it to your leg while you’re wearing shorts, and you probably will get a burn, depending on how demanding the game is. I don’t have a set of thermal tools so I can see how hot the area gets, but believe me, keep your fingers away while playing. Part of me does have a bit of concern regarding how hot the Deck gets with this shell on, but I guess it’s normal, according to JSAUX. Just hope my Deck doesn’t overheat one of these days.

There’s not really much of anything else to say about the clear case/shell. It’s not super transparent, but you can still get a pretty good look at the Deck’s internals while it’s running. While dbrand may have a teardown skin, it’s a lot better to actually see your hardware in action. Customizable back buttons are definitely a nice bonus, but keep in mind one of the sets will not work with the ModCase if you have one.

Even though the shell has its own thermal grease and aluminum sheet, how hot the Deck gets while it’s running is also a little worrying, although apparently with the way aluminum works, this is normal.

Up next: the review of the ModCase.

Review sample sent courtesy of JSAUX. Opinions are of my own.