An Interview with Noah (AKA BBQKITTY) – Founder of Steam Deck HQ 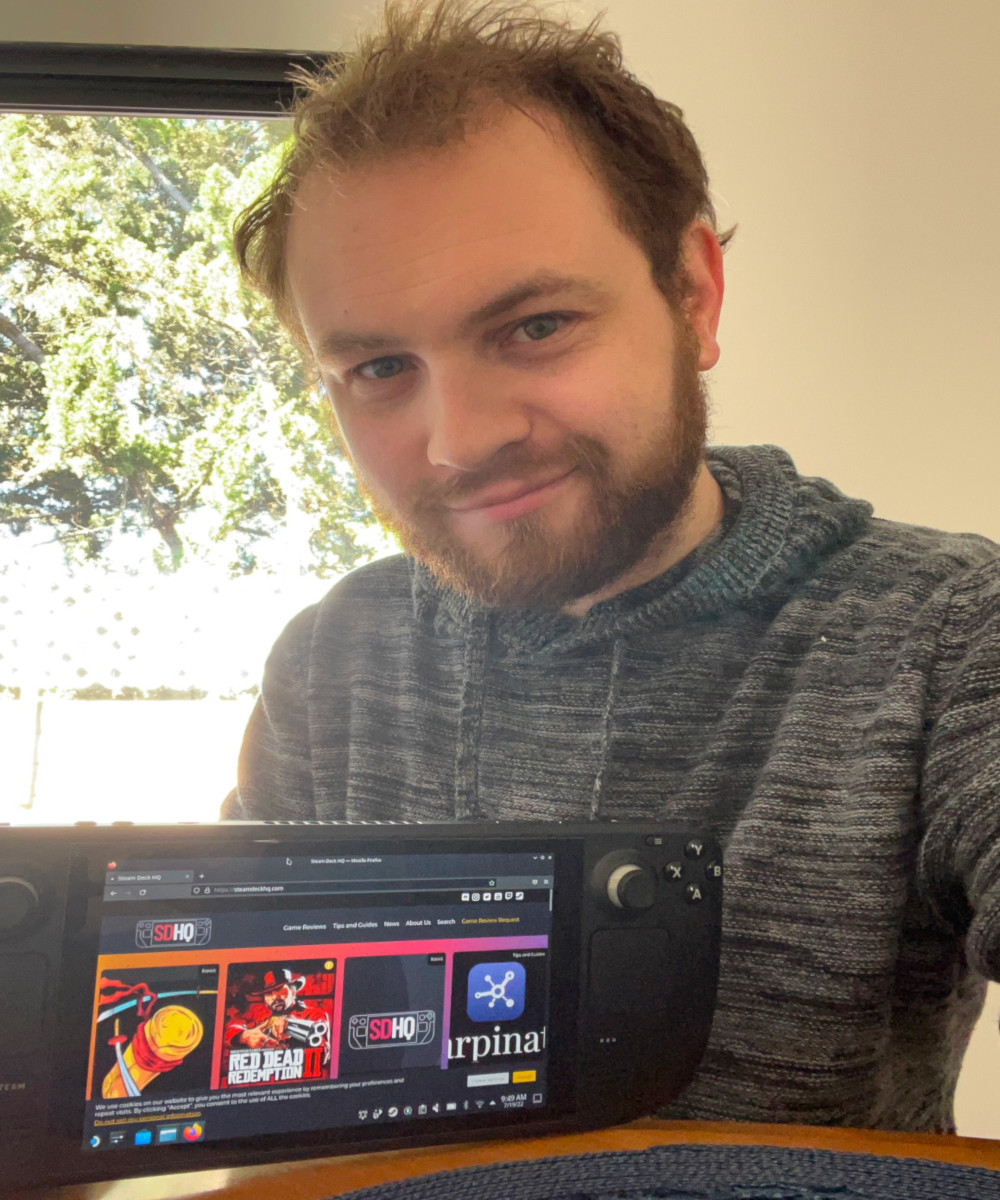 While Steam Deck HQ is only a month old, it has quickly become my favorite go-to site for checking all things Steam Deck-related. Though it originally covered game reviews and what the best settings are for each, the site has evolved into much more than that. It’s also a place where you can get news and guides. And the content will expand even further with YouTube videos.

So I wanted to interview the website owner, Noah, and get his thoughts on the Steam Deck, why he created Steam Deck HQ, and what we can look forward to as far as future content. Without further ado, let’s get into it!

If you don’t mind, could you explain to us who you are, your background in gaming, and what got you to create Steam Deck HQ?⌗

Not at all! Well, my name is Noah, but online, I go by BBQKITTY. I have been an avid gamer ever since I can remember but migrated over to mainly PC gaming around 13 years ago. From there, I grew my library and hit around 3,000 games on my main account in December of 2020 and I decided I wanted to do something with the massive library I had accumulated.

I originally tried streaming in 2021 to decently mild success, but one day I decided to try creating a news show for the stream and I fell in love. I had already heavily enjoyed the game development industry, but it didn’t click until that show. I had to stop streaming due to a new job and house, but I never lost that love I had. I had compiled ideas for a news website of my own that would have a more open, honest, and transparent way of reporting and while workshopping those ideas, the Steam Deck was announced. After getting my hands on it, I realized the potential of what could be configured, as well as the exciting space around SteamOS, Proton, and Linux in general. After seeing some other sites that did something similar, I put down the flaws I felt they had or the ways they could improve, and combined with my passion from the news show, Steam Deck HQ (SDHQ) was born.

For those who have never visited the site before, could you explain what Steam Deck HQ is?⌗

Steam Deck HQ (SDHQ) is a website for the Steam Deck and everything about it. We create performance reviews for games to see how well they perform on Deck, as well as provide different “builds” to prioritize different aspects of the Deck like battery or framerate. We also post news articles relating to the Deck, and tips/guides to teach how to use or do certain things on the Deck. Our goal is to evolve into a full Steam Deck hub, a one-stop shop where you can come to us for anything regarding the device. 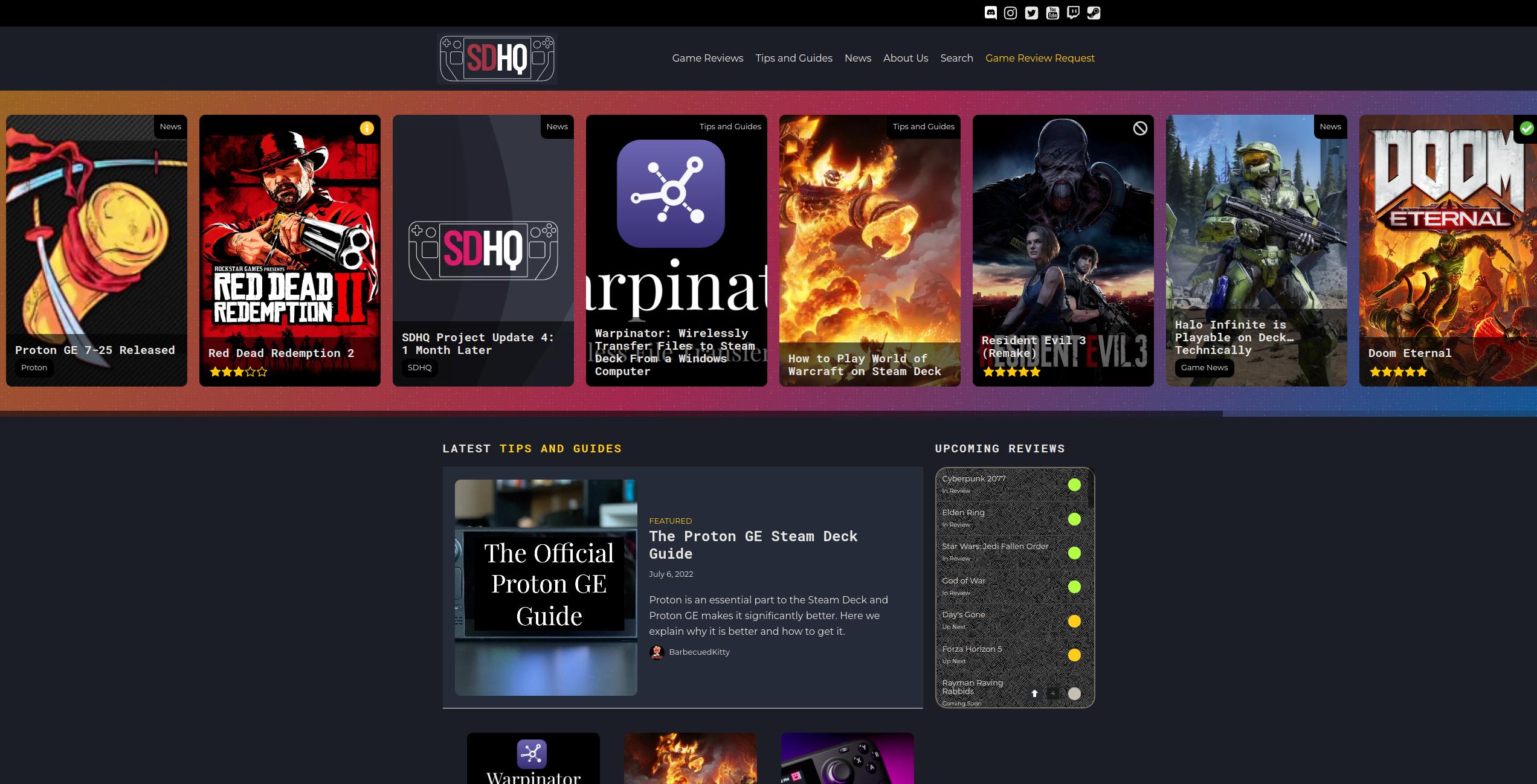 How long have you had the Steam Deck, and what are your thoughts on it?⌗

I have personally had my Deck since the beginning of May and I was blown away by the device. This being my first mobile PC, I didn’t really know what to expect until it was in my hands. I think this device is an evolutionary step into the future of gaming, not just as a device, but the Linux operating system. There are so many ingenious things it can do, like the refresh rate slider and OS-implemented FSR, that it essentially blew open the mobile PC space into something bigger than it was.

Of course, it does have its flaws. The battery life can be abysmal for certain games, even with tweaking, and some software quality-of-life changes would make things a lot easier, like downloading when the Deck is asleep. Overall though, I feel the pros heavily outweigh the cons just on pricing alone, but that doesn’t take away from how powerful and configurable it is.

What kind of games are you into?⌗

I tend to enjoy story-based games or RPGs/JRPGs more than others. I love the feeling of being immersed in a new setting and lore and discovering the hand-crafted world that was beautifully woven by the developers. I do enjoy most games, as I feel there is a charm to each one, though I can’t really enjoy racing games as much. 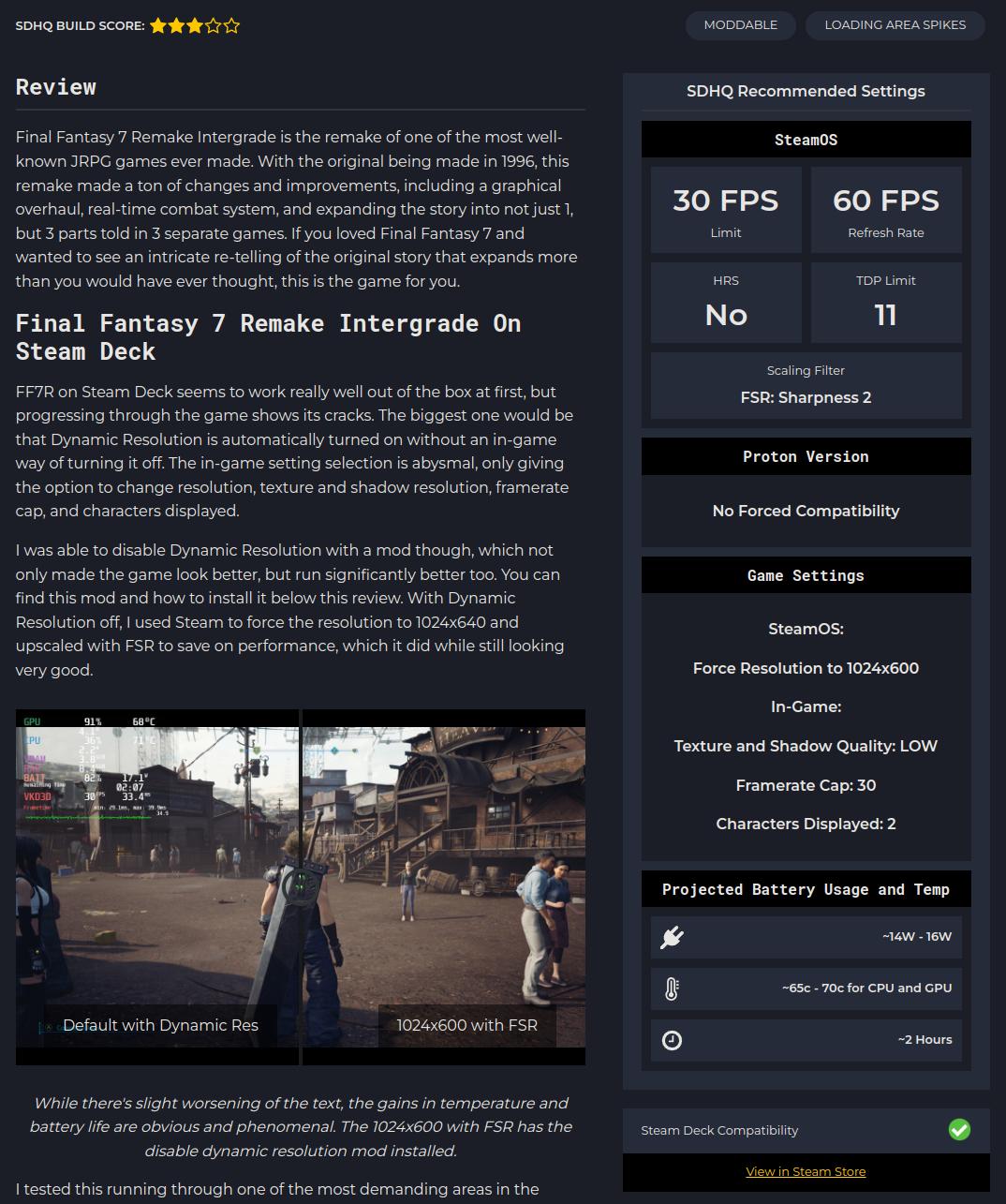 In your day-to-day life outside of the Steam Deck, what do you use for an operating system? Are you a Windows person or do you also use Linux on your desktop?⌗

Until the Steam Deck, I had always been a Windows OS guy. I have tried Linux in the past, but it was more in-passing and not full on. After using the Steam Deck though, I have reconsidered the operating system on my computer. I am still using Windows on my desktop as of now, but I have a good feeling that will probably change soon as I continue to research Linux distros and feel out which will be best for me.

How much traffic has Steam Deck HQ received since its inception over the past month?⌗

So we didn’t start analyzing traffic until after a week the website was live, but in the past…little over 3 weeks, we have had almost 10,000 hits on SDHQ! It was stunning seeing that number, but it was humbling to know something that not only myself, but the entire team working on it now, is something that people do enjoy. Our biggest day was actually three days ago, on our one-month anniversary, where we had over 2,000 hits in a single day. I have been over-the-moon about it and can’t thank people enough for their support.

Your Twitter has hit 500 followers. How do you feel about that accomplishment?⌗

I am baffled by it if I am being completely honest. Growing up, I was never someone who could consider myself well-versed in social media. I still don’t completely understand it. With Twitter, my goal is to not only inform others when we have new content, but to engage and help with Steam Deck issues and discussions. With the Deck being such a hot topic right now, and a lot looking for resources similar to what SDHQ provides, it becomes a match made in heaven. 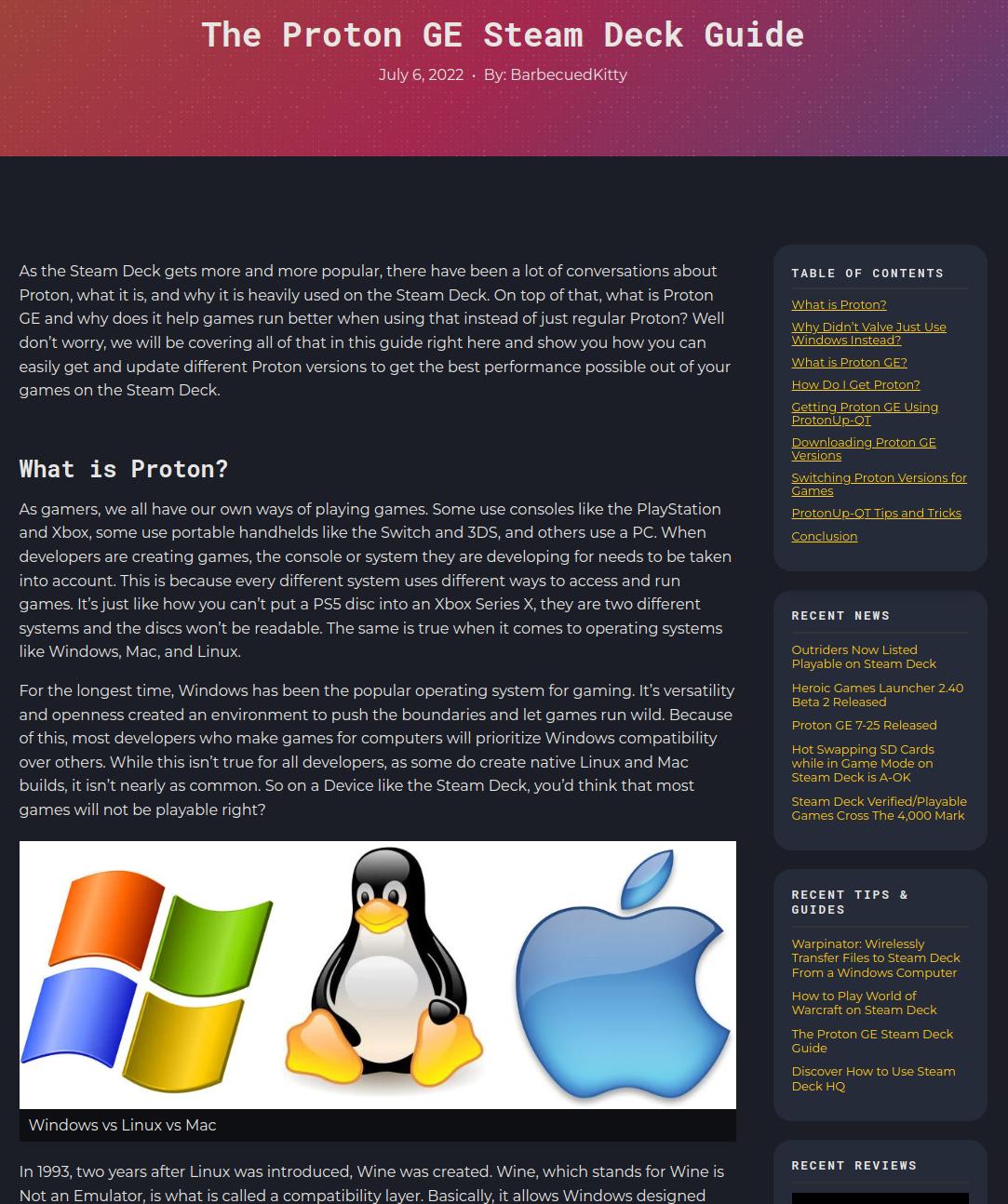 Anything that we can look forward to in the future regarding Steam Deck HQ?⌗

We have a significant amount of ideas and plans for expanding the site and community engagement. Yesterday, we launched our Steam Curator page where we will be posting a review there that links to our full review on the website. We also have YouTube performance videos on the horizon. These will be videos where we showcase the performance of the game on Deck with and without the builds we provide on the website. We want this to be a visual showcase on our builds and the benefits it has through direct capture and live statistics.

We are also currently working on a Patreon for those who want to support us more directly. We do have plans to expand further into YouTube and even Twitch, but since those ideas are still being worked on, I can’t reveal more just yet. SDHQ is just getting started! 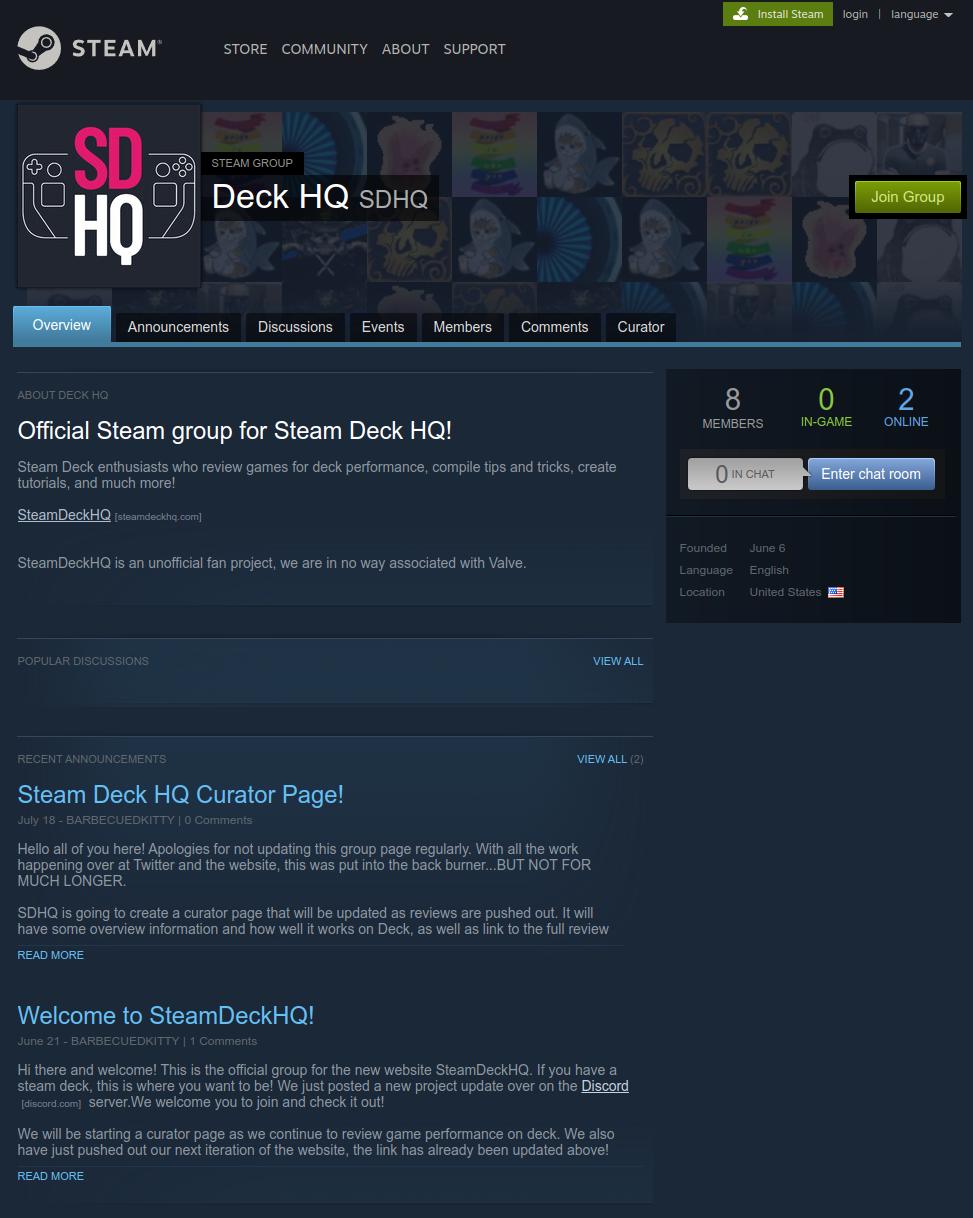 Anything else that you want to share with us?⌗

The amount of support and love that we have gotten from everywhere has been monumental. SDHQ was just a small idea at the time and I could never have imagined this kind of reaction and growth starting out. I cannot express the amount of thanks and appreciation I have for every single person who is supporting us through any of our channels. This has been a dream come true so far. Thank you everyone.

And thank you as well. You have been there from day one cheering us on. I remember, very clearly, the first post you made about SDHQ existing and I was blown away. Thank you for this interview and opportunity to share more about myself and what is happening under-the-hood with this project.

Alright! What an awesome guy to interview. Check out Steam Deck HQ for all things Steam Deck. You can also request game reviews (or contribute them yourself), join their Discord, follow their Twitter, join their Steam curator group, and so much more!