An Interview with Liam Dawe, Owner of GamingOnLinux 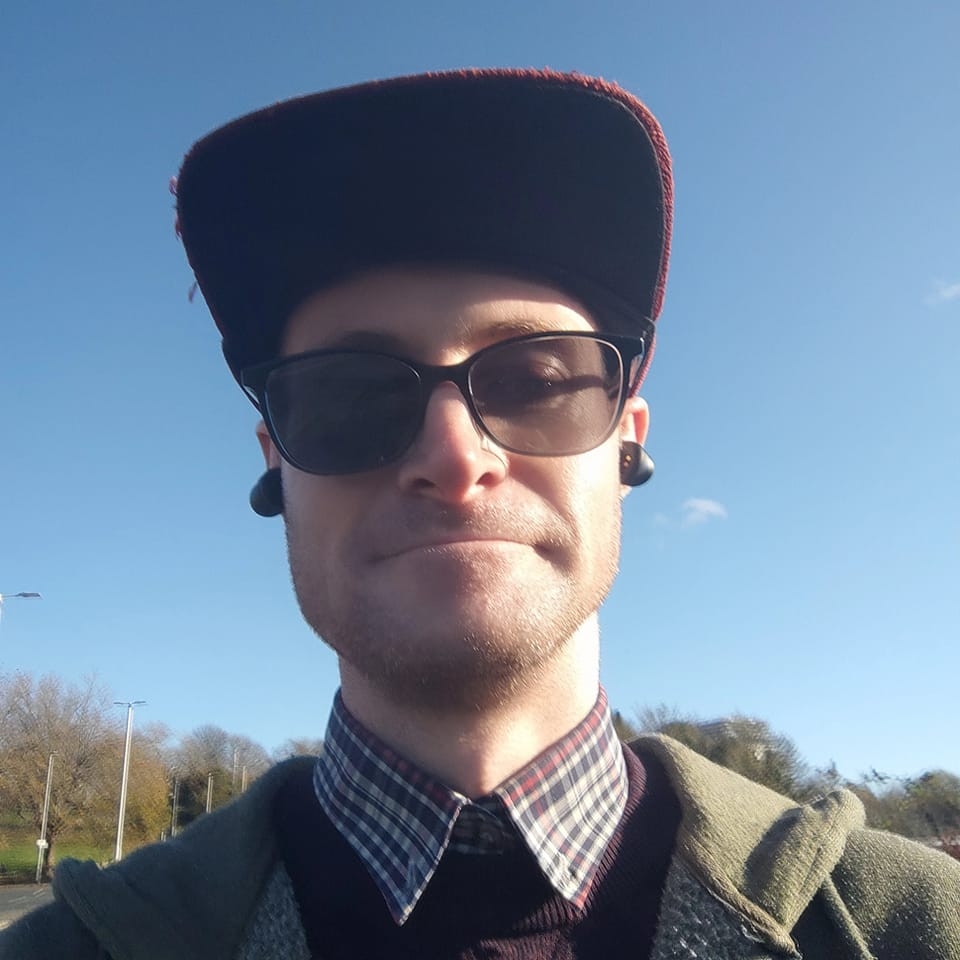 I got a hold of the man. The man behind one of the most popular websites out there for Linux gaming. Liam Dawe, the owner of GamingOnLinux (GOL). In this interview he reveals how he got into Linux, why he created GOL, his obsession over the Steam Deck, among other things. He even tells us how he manages to put in so many articles on his site on a day-to-day basis while having a family and other life obligations. So without further ado, let’s get started.

As one of the most prominent Linux-gaming-oriented websites out there, chances are most everybody knows you. But there are probably some who still don’t. So let’s start off with the basics: who are you, your history with Linux, and why you founded GOL.⌗

My name is Liam Dawe, I’ve been using Linux on and off for I think over half my life now. First true introduction being the first PC that was purchased for me, when I was about 15 and it came with Mandrake 9.2 on it. It was a gift from my Grandad, may he rest in peace.

I’ve always been a tech-head, thanks again to my late Grandad there growing up with lots of different tech like the Amiga and other systems – so for me playing with Linux was a sort-of fun thing to do. It was different, and I liked the ideas behind it. I had no idea what I was doing back then though of course.

Eventually, I settled a lot more when Ubuntu came along and things fit together quite nicely. I started following (the now dead) LinuxGames.com, did a few contributions here and there but overall it never really had a lot on it. I thought I could do better, so GamingOnLinux was created really as a result of that.

How long has GOL been around?⌗

GOL has been around officially coming close to 13 years now. A few false-starts before that but yeah, official number is 13 years. That makes me feel weirdly old.

What did you talk about on the site prior to Steam coming to Linux sometime in 2012?⌗

Mainly indie bundles, open-source games, a few rumours about Steam like them denying it was coming to Linux, Desura (R.I.P) and not a whole lot else. It really was just a slow trickle of things coming in.

How many editors do you have, and how often do they contribute?⌗

Well, it’s mainly just me for the most part. There’s a few amazing contributors who help with moderation, approving new user posts, and the occasional article whenever they feel passionate about something (or when I really do have to take time off). Technically, there’s 6 others in addition to me but they all have their own lives and just want to help because they’re also Linux fans.

We see somewhere around 25,000 unique viewers per day. We’re nothing compared to the likes of IGN of course, but for a mostly one-person show it’s pretty amazing when you think about it, and that took many years of sticking to it.

I assume you’re a full-time Linux user and gamer. What’s your daily driver as far as distro, desktop environment, etc?⌗

Until recently it was EndeavourOS (pretty much Arch), but I grew tired of all the little things that need attention, and that like to break. It’s obviously hardware and update schedule depending, everyone has a different experience but for me it was too much of a nuisance in the end. So now, it’s Fedora KDE. Apart from NVIDIA drivers being a nuisance to install, it’s been pretty smooth on Fedora for me personally.

What are your impressions (if any) of Windows or Mac?⌗

Windows, where do I start? I’ll tell you what happened recently. I loaded from a fully working Linux install into Windows (dual-boot) to run updates, which I do regularly to keep it working properly for if I ever need it. It had no internet. Ethernet just refused to connect, so I booted back to Linux and it’s fine. So I boot back to Windows again and nope, Ethernet just refused to work. Their built-in problem solver did nothing, various guides (there’s HUNDREDS on this exact issue) all did nothing. In the end, I gave up. A couple of days later, the Ethernet on Windows worked again. confused noises

Personally, I just don’t like Windows as a platform. Same with macOS, neither of them suit my personal needs, and my want for more privacy and freedom. That’s not even getting into the increasingly walled garden of Apple products, which I want to be no part of. 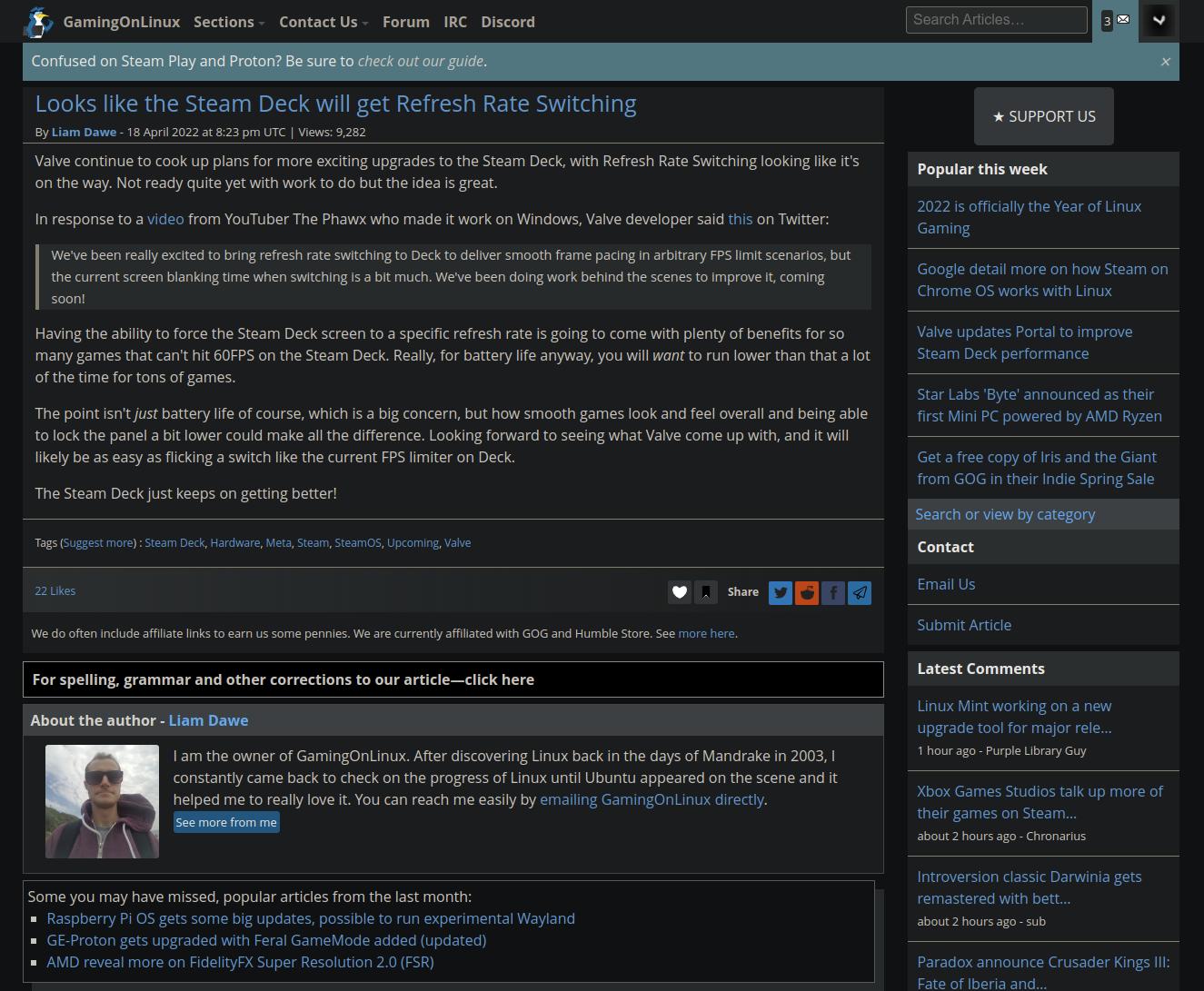 Give us the laydown as far as what your favorite games and game genres are.⌗

I’m a sucker for base-building RTS and plenty of turn-based strategy too. I grew up playing X-COM: UFO Defense, Dune 2, later Command and Conquer, then Red Alert and … you get the idea. They are imprinted into my soul at this point I think.

Can’t beat a good FPS either, oh but space games too, I LOVE nerdy space stuff. I’m a bit into No Man’s Sky on the Steam Deck right now.

At GOL, I know you cover a wide variety of topics in the Linux gaming world. Continuing on with your favorites, what are some of your favorite topics to cover?⌗

Honestly, I just love sitting back and watching all the advancements that happen constantly. Linux today is a COMPLETELY different world to the one I entered into. It’s both exciting and terrifying to keep up with it all and to find GOL’s place with it all too.

You’ve talked thoroughly about the Steam Deck. Tell us your thoughts about the device.⌗

Although, just as I write this today, I have it sat next to me and it’s making me sad. Mine is an early one, since it was a review unit. The fan sounds like it’s dying and I had a LinusTT moment, taking the case off without popping out the SD Card first. Goodbye SD card, probably goodbye SD card port too after trying to get it out. Doh. Lessons learned.

Outside of me being a complete moron with it, the Steam Deck is an incredibly transformative experience. I don’t have to sit at my desk to game any more, the chains attaching me to it have been firmly broken.

I do have a personal 512GB order in Q2, which I kept in line for after reviewing, so I think that tells you how excited I am about it even though I already had one from the review.

However, I personally think that the Deck Verified system has too many issues right now. I would prefer it if Valve slowed down, and checked through more of what’s already done to learn from their mistakes and continue the improvements. It’s not totally bad though, I do think a very large percentage are done correctly but it’s constantly becoming clear that more personal testing is needed for all the issues I and others keep finding when you get further into games. There’s the feedback system now, so hopefully that will begin to tell Valve what they need to know officially.

The Steam Deck is a monster of a device though. Who would have thought you would be playing previously PlayStation and Xbox exclusives, on a Linux handheld? What [they] have managed to do is nothing short of spectacular overall.

Do you have any familiarity with programming languages, such as C/C++, Rust, Python, etc?⌗

I know how to do very early terrible PHP that would make any slightly modern PHP coder want to puke and pull their eyes out. I coded the GOL website, it’s frankly incredible it hasn’t caught fire by now. How is it still online even though I have no idea what I’m doing? Smarter people have asked me this, my only answer is rum and coke and plenty of it with late night attempts to make PHP do stuff and things. 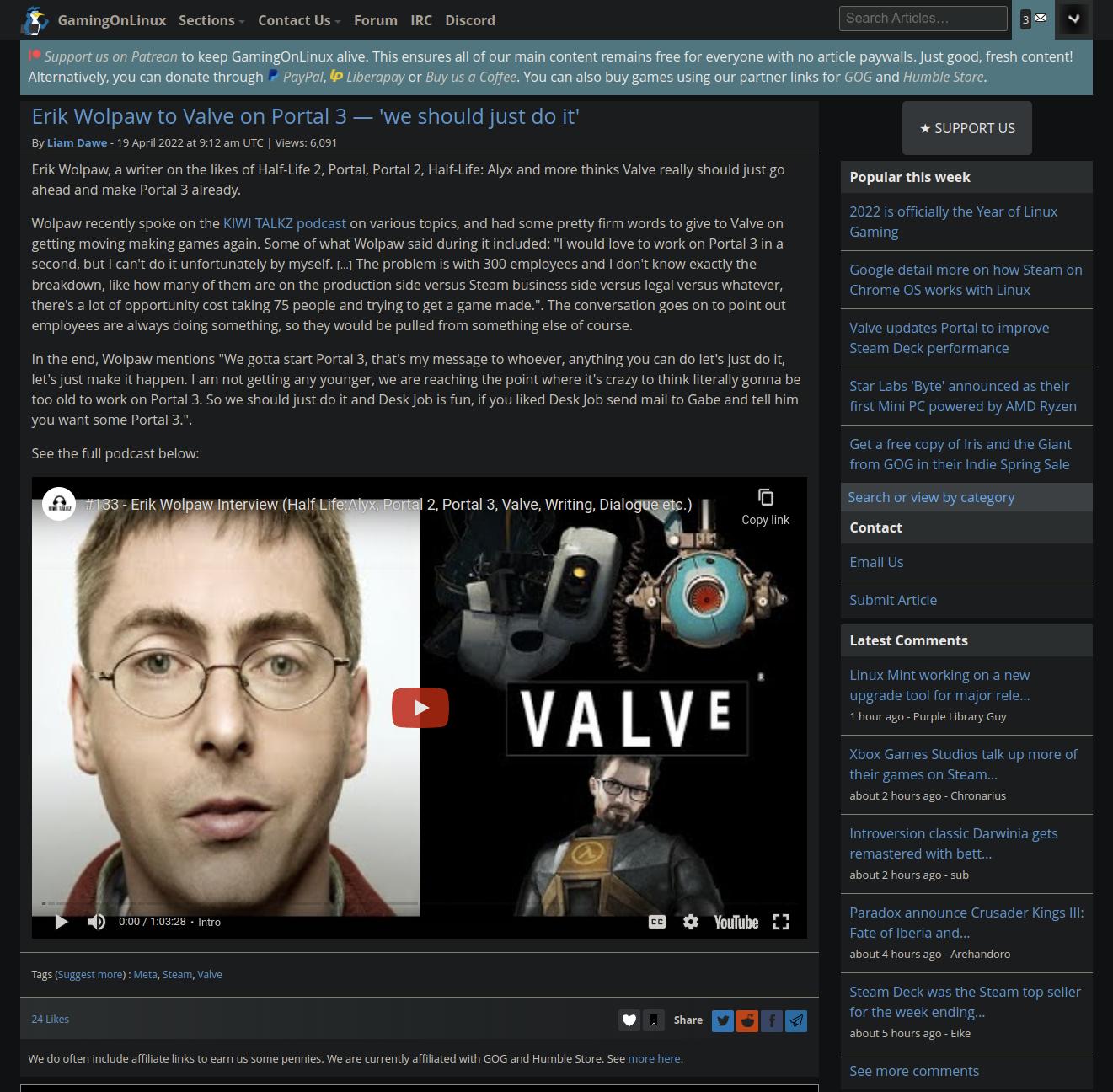 How do you manage to write so many articles in a single day? (chuckles)⌗

Ignoring friends and family, having no life outside of my work and then lots of Netflix. You should watch Arcane, it’s very, very, very good.

Really, that’s not even much of a joke. Some people probably don’t think it takes much time, but I really do try to test a lot of what I talk about. That’s probably why some have joked in our Discord how I’m like a “book of Linux Gaming.” So it’s not just the “hey it works” articles people see; it’s all the hidden hours of testing, talking to developers, telling developers about bugs and the list goes on. There’s been days where just answering emails, and gathering info to do these replies takes half the day.

What has been the general feedback? Are people liking what they read on GOL, is the theme of the site to their tastes, etc?⌗

I really don’t know why people support me or GOL, it’s mind-boggling. I’m an idiot :D

Seriously though, 99% of the feedback on how I run GOL is hugely positive. It’s actually quite rare that I or the contributors have to actually remove anyone, or send out a warning. For the most part, people are quite kind. Except a few trolls on Reddit who seem to have nothing else to do with their lives but put down others.

What can people do to improve GOL, if there’s anything?⌗

Keep sending in those news tips, bug developers to send me keys so I don’t have to cry at my bank balance, and just keep being great to each other across GOL and the rest of life.

Don’t open your Steam Deck. If you do, please take the SD card out. I am le sad.

That wraps up this interview! Be sure to check out GamingOnLinux for the latest on the Linux gaming front, interact with other Linux gamers on their forum, IRC, and Discord. You can also subscribe to their daily newsletter, explore their Wiki, submit a guest article, follow their Twitter or YouTube channel…there’s a ton of things you can do there. Finally, you can financially support them to keep the articles coming, as well as allow them to buy games for your review.

Read other posts
← You Can Update the Firmware for Your DualSense on Linux. Here's How Lutris v0.5.10.1 Released, Improves Steam Deck Experience →