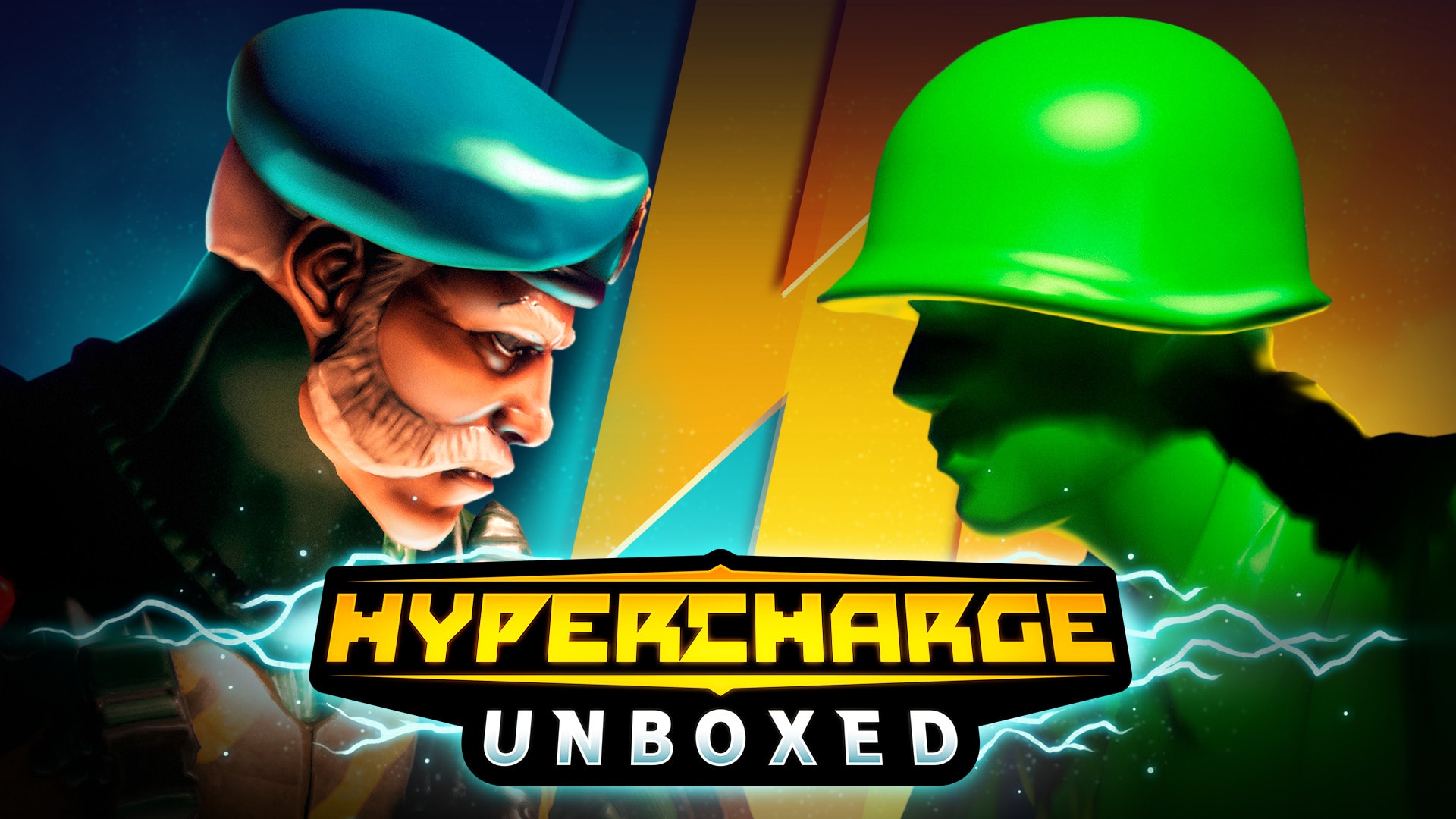 As a kid, I loved the original Toy Story animated movie. Fast forward almost 30 years later, and I find myself reliving that toy-figures-come-to-life nostalgia, albeit in a more mature setting with guns.

HYPERCHARGE: Unboxed is a first- and third-person shooter where you’re in control of a toy action figure. That action figure could be a Ryu look-alike, a reptile, a Storm Trooper look-alike, an insect, a standard human, and plenty of other species. Each species has their own voice. It’s pretty great.

The idea of playing a miniature character is not new. Grounded is a survival game set in someone’s backyard, where you play a shrunken character. Hot Wheels Unleashed puts you in the cockpit of a toy race car. Same goes for PocketCars. Still, each time I play a game like HYPERCHARGE, it really is neat to see the world from a microscopic perspective, in ways that are hard to describe until you actually play it. 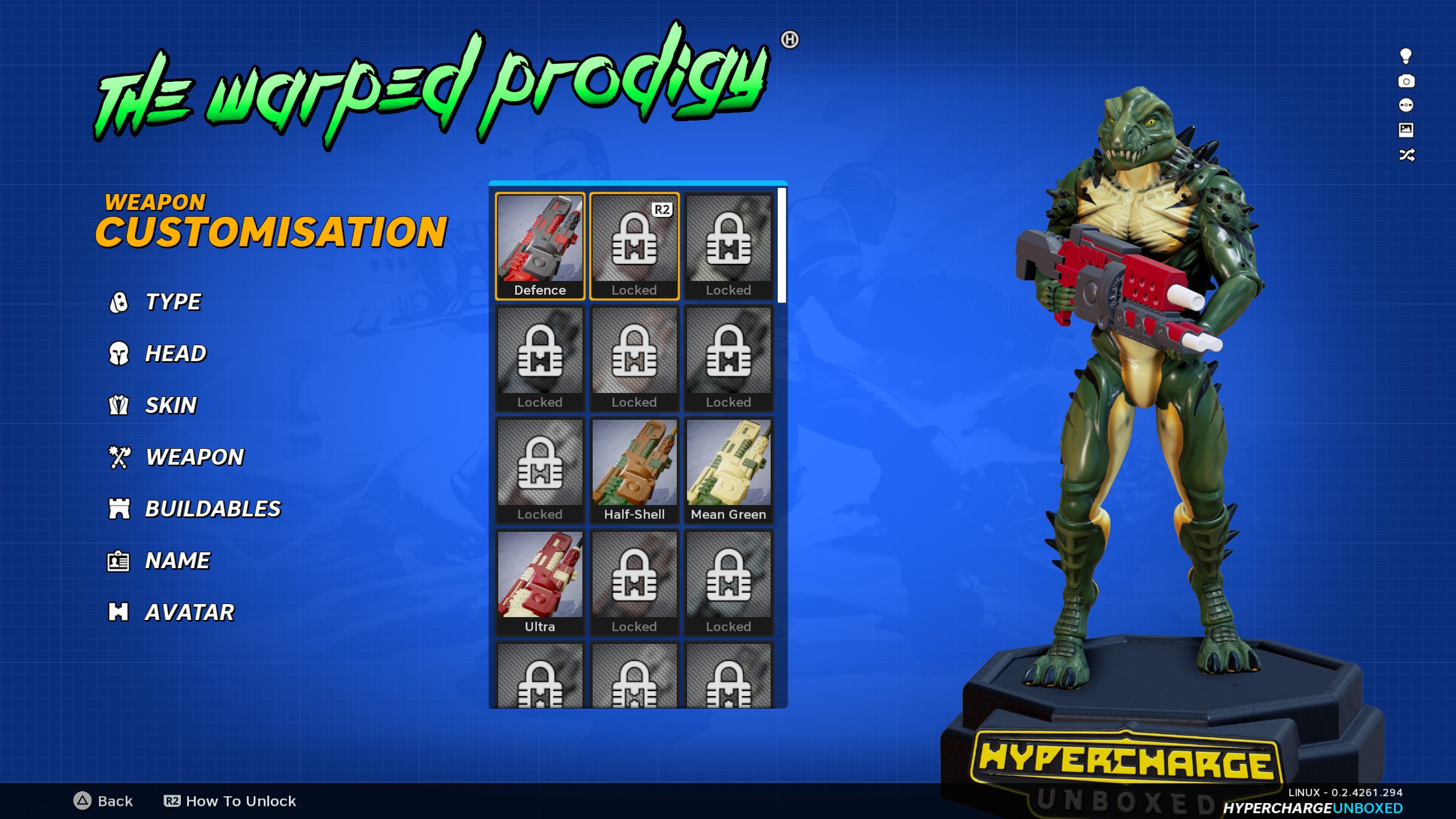 Up to four players can play co-operatively on a map, where their goal is to protect the Hypercores from enemy action figures. Maps can consist of a garage, a bathroom, an attic, a bedroom, a living room, a kitchen, a toy store, and plenty of other areas. Each level is detailed intricately. In the bathroom, for instance, you will see a faucet with running water, the toilet clogged up, and a bottle of laundry detergent called “Wave,” with the name and colors clearly indicating it’s a Tide rip-off. In the toy store, you can make use of boxed toys that stick out slightly from the shelves so you can propel yourself higher up, giving you a better vantage point when sniping. All of this, plus beautiful graphics detail, make it really interesting to see what the world looks like from an action figure’s viewpoint.

Generally, each map has three Hypercores: blue, red, and green. Other maps may have only one Hypercore or more than three. Don’t just use the firearm your action figure is supplied with to defend these cores; when a wave of enemies has been cleared, you can build your defenses around these cores with turrets, walls, and traps that will make it more difficult for the enemy to reach the core. These defense options therefore adds a bit of strategy to the game, in addition to just facing off a bunch of enemies.

Adding these defenses require credits; credits can be obtained by collecting the various coins scattered throughout the map, getting the coins dropped by enemies, or getting bags that contain a pack of credits. Credits can also partially be retrieved by removing already built defenses, or by sharing them with your teammates. Credits will also be essential for buying new weapons or weapon attachments, if they’re not already on the ground. 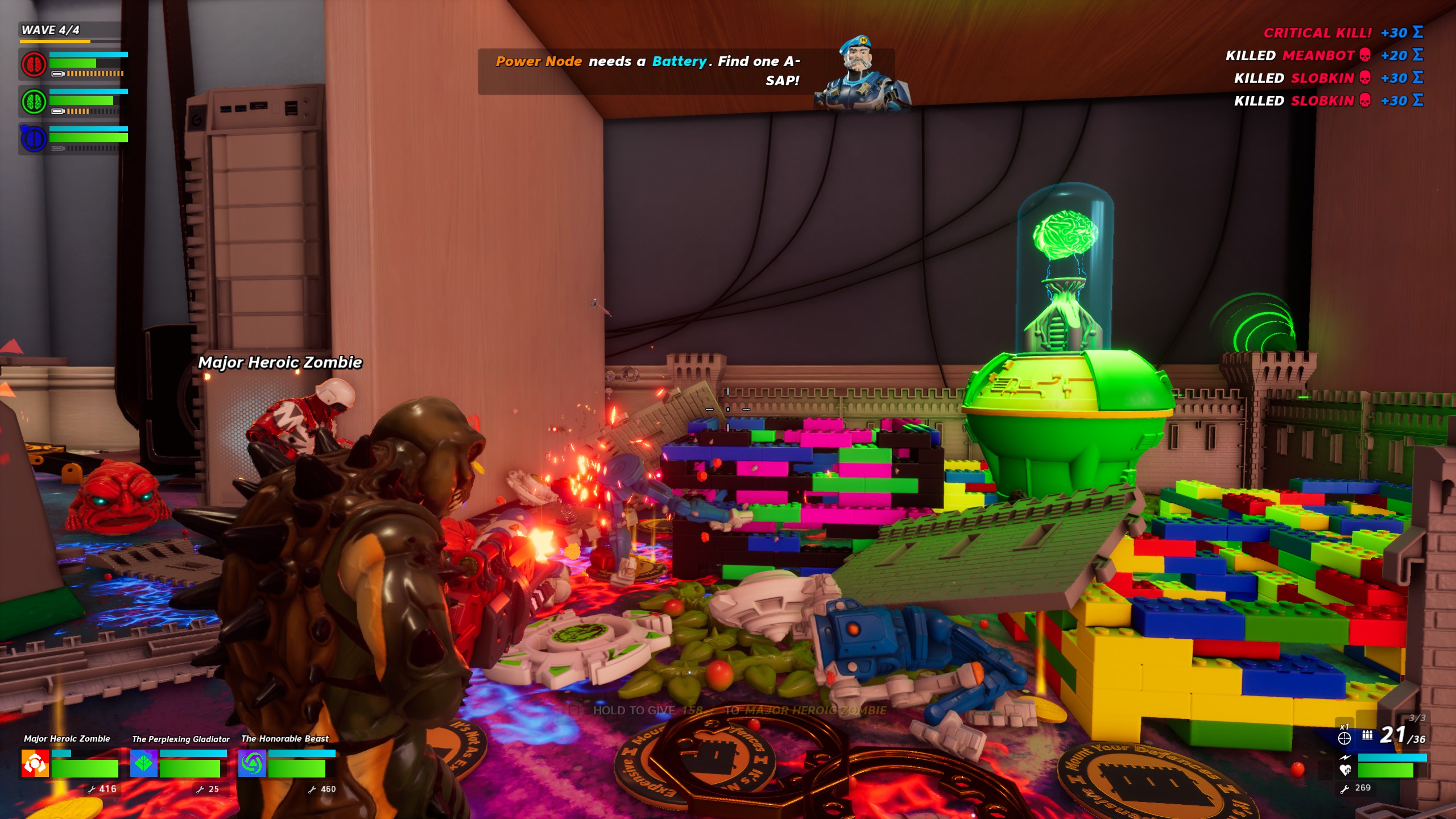 There’s support for online multiplayer, local split-screen, or if you play by yourself you can add bots. There’s more than just the Waves mode too. There’s deathmatch, where instead of the game being set as PvE style, it’s now PvP where each player tries to kill the other. Up to eight players can play with this mode. There’s also a Free Roam mode where, as the name implies, you can freely explore a map without the fear of enemies attacking you, as well as a “Plague” mode where you try to avoid becoming infected by another infected player.

The great thing about HYPERCHARGE is that you can seamlessly switch between first- and third-person perspectives. I tend to favor first-person as I find it a bit more immersive, but I wish I could see the reload animations from this perspective (when reloading in first-person, the gun is hidden from the camera). The difficulty of enemies can also be adjusted to suit your tastes.

Weapons include assault rifles, machine guns, sniper rifles, shotguns, flamethrowers, ice blasters, grenade launchers, and (I believe?) there’s more. Except for the “Plague” mode, ammo is unlimited. Reloading only takes two or three seconds, and what’s neat is you can melee an enemy or climb over a box while doing this. Weapons can be equipped with attachments, such as a scope or a bipod, that can increase the weapon’s accuracy. Two weapons can be carried at a time, and switching between them is as simple as rotating the firing point on the gun. Some weapons, however, such as the flamethrower, take up both spots on the weapon wheel and will not allow you to carry other weapons. 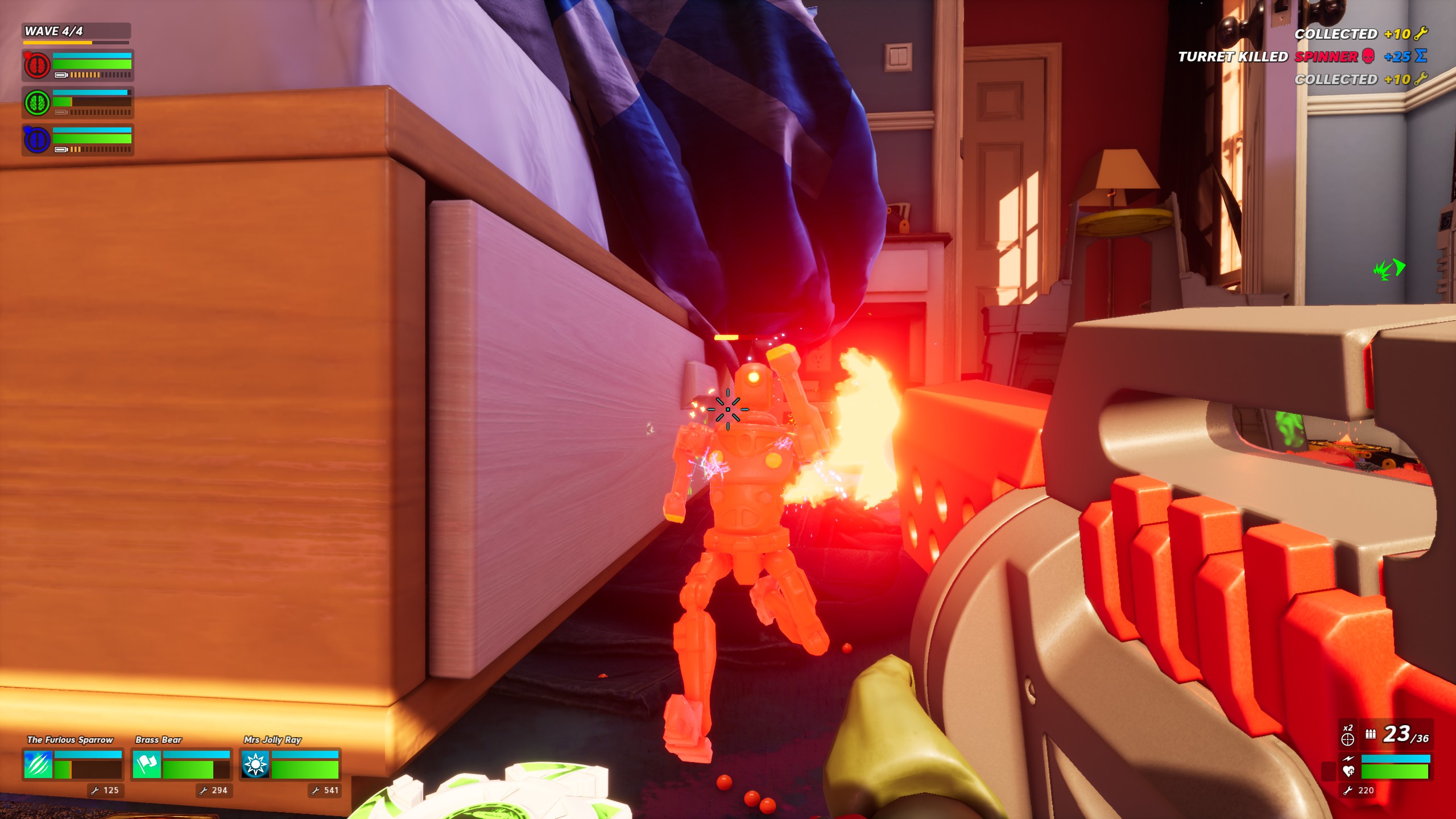 When all the waves of enemies are cleared, an award is given. If all cores are saved, a Platinum medal is awarded. If any of the cores go down, the quality of the award decreases. The higher the award, the more goodies will get unlocked, such as new character skins, new levels, new traps, etc. If all the cores are down before the waves are cleared, it’s a game over.

General gameplay is solid. Gun sounds, despite them coming from a plastic action figure, sound authentic. Xbox and PlayStation gamepads, in addition to keyboard and mouse, are supported. Some weapons are more accurate than others, although they may carry less ammo per clip. There’s a good variety of enemy types, such as green foot soldiers, tanks, airplanes, human look-alikes, robots, exploding balls, planes that home in on you, and plenty more. There’s also an assassin with a sword that’s extremely deadly when dealing with it in close-quarters combat. Usually there’s a boss at the final wave, including a massive robot or an airplane that drops off the green foot soldiers.

Throughout your time playing the game, there’s a gray-haired action figure that walks you through the tutorial mode, and yells at you whenever an enemy is attacking a Hypercore. At first he was humorous, but I found him annoying after a while. Fortunately I could turn the announcer volume off. It’s something you may want to do yourself once you get comfortable with the gameplay mechanics. 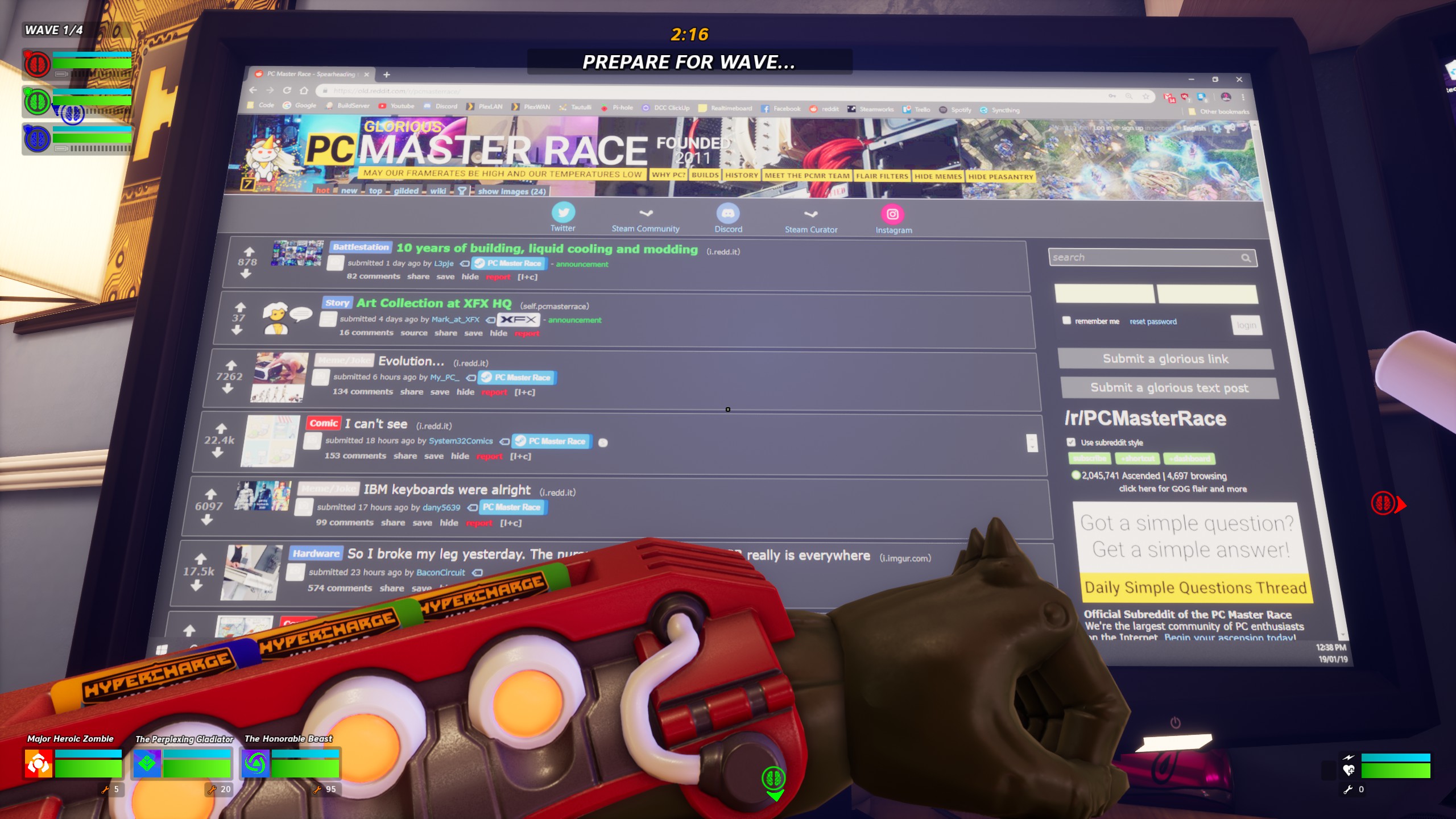 When the Linux version first launched, unfortunately the servers were not cross-compatible with Windows. As of yesterday, however, cross-platform multiplayer between Linux and Windows now works. I can almost always find at least one server that someone else is hosting. If you’d like to watch some gameplay, I have a recording available on YouTube.

Besides that, the Linux version runs great. When I’m not recording I get an average of 90 FPS on my GTX 1660 Super on the highest graphics settings at 1440p resolution. Sometimes it can be a bit annoying when first launching the game, because it will randomly crash. I have to delete the appmanifest_523660.acf from Steam’s compatdata directory before launching, then the launch error disappears. HYPERCHARGE also appears to be Steam Deck Verified, so you should have a solid on-the-go experience with this game.

For $20, HYPERCHARGE: Unboxed is a pretty good deal for what you’re getting. Show your Linux support with your wallet by getting the game on Steam. I have also added HYPERCHARGE to the Recommendations page under the “Native Steam Games” section.