Aside from the corny artwork, Frontier Hunter: Erza’s Wheel of Fortune is a great example of how a Metroidvania should get done right. It combines the 2D side-scrolling of both the Metroid series and the Castlevania series, and incorporates a lot of fighting elements as well. Furthermore, there’s some RPG at play here, as your character’s stats will increase after gaining enough experience from defeating monsters.

Frontier Hunter is the successor to Tower Hunter: Erza’s Trial. The developer and publisher behind both titles is named Icesitruuna Studio, a four-person development team from Chongqing, Southwest China.

You start off with Erza, a streamer who happens to have a talking hairpin. Her speciality is the katana, the rapier, and the spear. Later on in her journey, she gets allies: a chick with some heavy boots and can shoot rockets with a bazooka, and a guy with a gas mask who wields dual-blades and can dance pretty well. You can switch between each character at any given moment, and you can even call them in for assist (although I forgot the button combination that’s needed for this).

Scattered throughout the game are cutscenes. These cutscenes are normally triggered before or after a boss fight, or when a certain section on the map has been reached. The characters speak Japanese, but English subtitles are available.

Game is advertised as lasting 10 hours. I’ve put in close to seven so far. And I’ve really been enjoying the game well throughout the time I’ve been playing it. Not only is it a Metroidvania/RPG hybrid, but there’s plenty of combat, and the game practically feels like a fighting game with the button combinations needed to execute special moves. For example, quarter-circle forward and pressing the appropriate button with Erza’s rapier will cause her to spin the blade around in a circle, then finish off with a powerful stab. She can also unleash her ultimate move with enough MP and “rage points” built up, causing her to do a kickflip that will freeze enemies in their path. These sort of skills can be unlocked by opening one of the various chests hidden throughout the game and obtaining the necessary scroll.

Characters can jump and dodge to avoid enemy attacks. Dodging also acts as a dash, so it’s useful for quickly moving across a level.

Magic can be used in addition to special moves. Both attack types consume the characters MP gauge. Characters can shoot fire, lightning, ice, and other status elements. MP is gradually restored over time, but can be replenished more quickly by using the apppropriate item. I feel like the special moves should have had their own gauge rather than being combined with the MP gauge.

In addition to plenty of enemies, there’s plenty of bosses too. Decent bosses that are definitely going to offer a challenge, especially if you’re not properly equipped. You can craft dishes prior to the boss fight (or at any time when you’re at a save station) to give your characters a temporary boost in attack, defense, speed, etc. so long as you have the necessary ingredients. Ingredients can be obtained from the plants on the map.

Different types of weapons can be unlocked or upgraded. The same goes with armor and accessories. Each weapon, armor, or accessory offers different benefits and stat boosts, depending on their rarity. Equipment can be further upgraded with the use of Magic Cores, which can be obtained by defeating certain monsters. You can also customize how your characters look with different outfits, hair styles, and hair colors.

One flaw that I noticed is that during cutscenes, or when a character is speaking, sometimes the subtitle text gets cut off. I’m sure it won’t be long before this gets fixed. Another quirk is enemies respawn every time you enter a room. It’s a bit of a nuisance; this could get toned down a little bit, like have a cooldown timer before they respawn.

Very well. This should be a Steam Deck Verified title. Runs out of the gate with GE-Proton7-42. You may need to adjust the resolution and window mode in the Settings menu, since the game might not properly fit on the screen at first. You can literally kick the TDP down to 5 W and get 30 FPS on Ultra settings, with the resolution set to 1024 x 576. You might even be able to get away with 40 FPS at this TDP limit, depending on where you are in the game and how many enemies are on screen. You might want to kick it up to 6 W though. 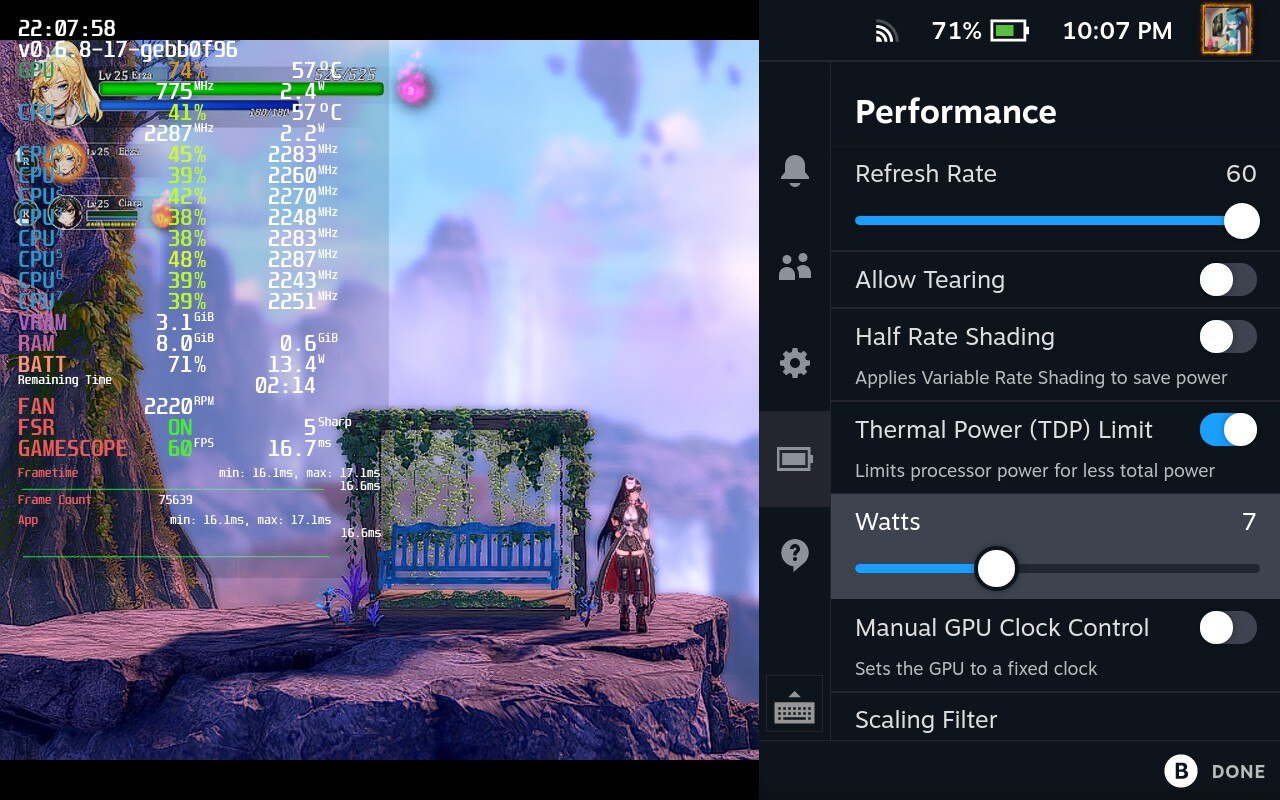 Average battery consumption between 30, 40, and 60 FPS was the following:

So, at 30 FPS you should be getting at least four hours of game time. At 60, about two-and-a-half.

Great Game to Pick Up if You Like Metroidvanias and RPGs⌗

As I’ve already said, Frontier Hunter is a great game. I’ve had a lot of fun kicking ass with a short-skirted, bazooka-wielding chick and blowing flies to smitherines with rockets. Or kicking a dragon to its defeat. Or slicing a scorpion boss with twin blades. All the while getting leveled up with better stats, better equipment, and more battle skills. And there’s plenty to explore, plenty of chests to unlock, plenty of weapon and armor upgrading, plenty of lore to catch up on with the cutscenes.

Honestly, this is a great example of how an early access game should look. I can’t wait for more updates; it’s only going to get better over time. I may even write another review after I finish the game and it reaches its 1.0 release. It’s expected to be in early access for “about 12 months.” Apparently the plot story “is only roughly 30% of the full version.”

Game is available on Steam for $20.