Fraymakers just released in early access about 15 hours ago. I’ve only spent 4.5 hours so far, but it’s enough where I can collect my thoughts onto a piece of paper – that being this post.

In case you’re not aware, Fraymakers is a pixel-art platform fighter that closely resembles the mechanics from the Smash Brothers series. The team behind the game, McLeodGaming, is also responsible for the infamous Super Smash Flash 1 and 2.

Platform fighters is certainly not something new. There’s quite a few out there: Nickelodeon All-Star Brawl, Slap City, Rivals of Aether, Rushdown Revolt, Brawlhalla, MultiVersus, and Brawlout, just to name a few. All of them try to replicate the mechanics of Smash in one way or another. Some of them add their own twist. Some have done well. Others were put out to the market way too early just to make a quick buck. 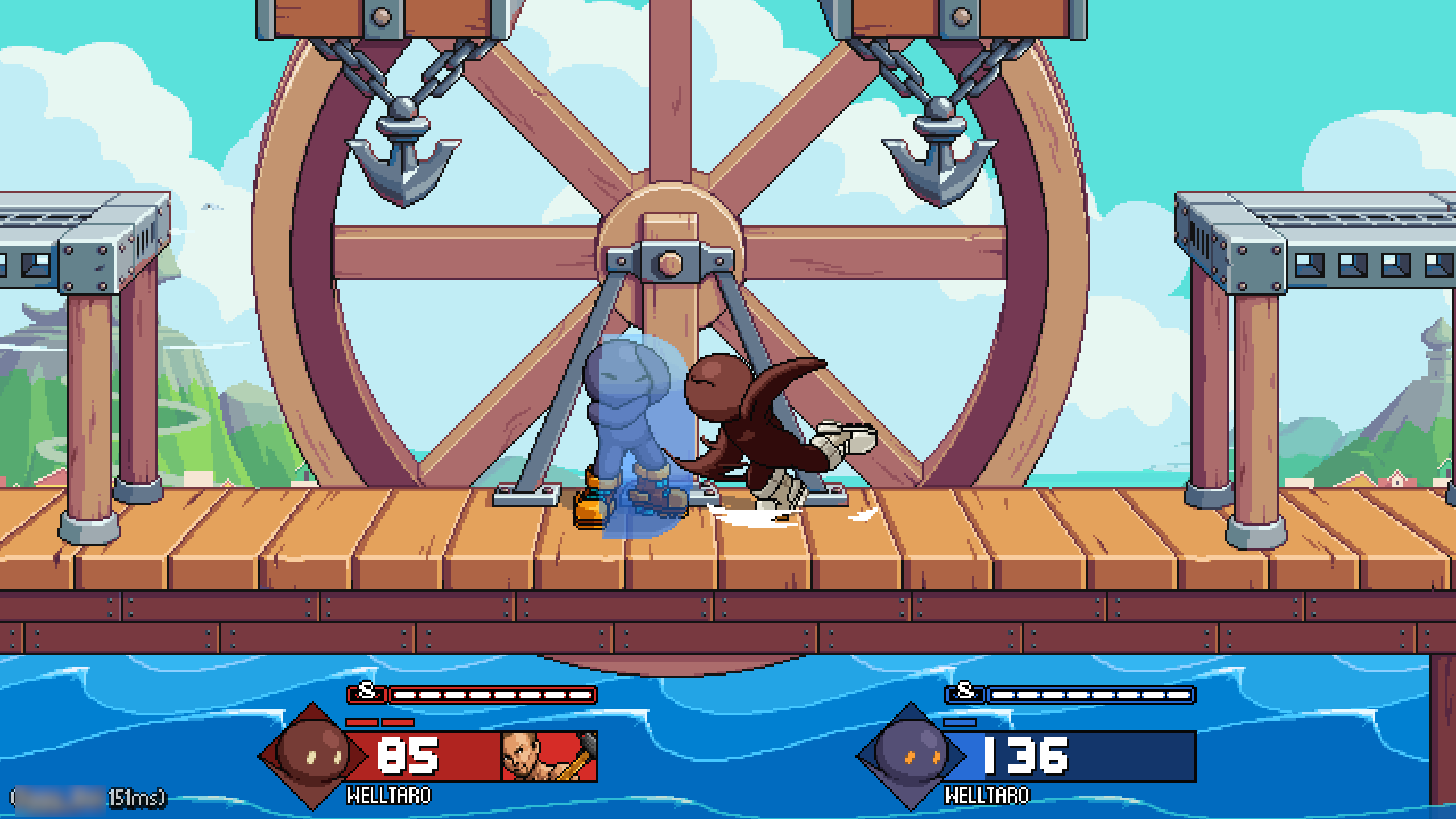 Fraymakers is the latest to hit the block. This is one that I’ve been looking forward to.

In a nutshell, the mechanics are very similar to Smash. You deploy a shield in front of your character with the left or right trigger. You can wavedash (move forward across the ground without actually walking), air dodge, grab, throw in four different directions. You can jump and double jump. Add a third recovery move with Up Special. And yep, specials are in here: neutral, side, down, and up. Standard attacks too: the standard one-two-three combo, side tilt, up tilt, down tilt, charagable smash attacks. Build enough damage to your opponent, knock them off the stage. You get the idea.

Differences, as far as I can tell, are: 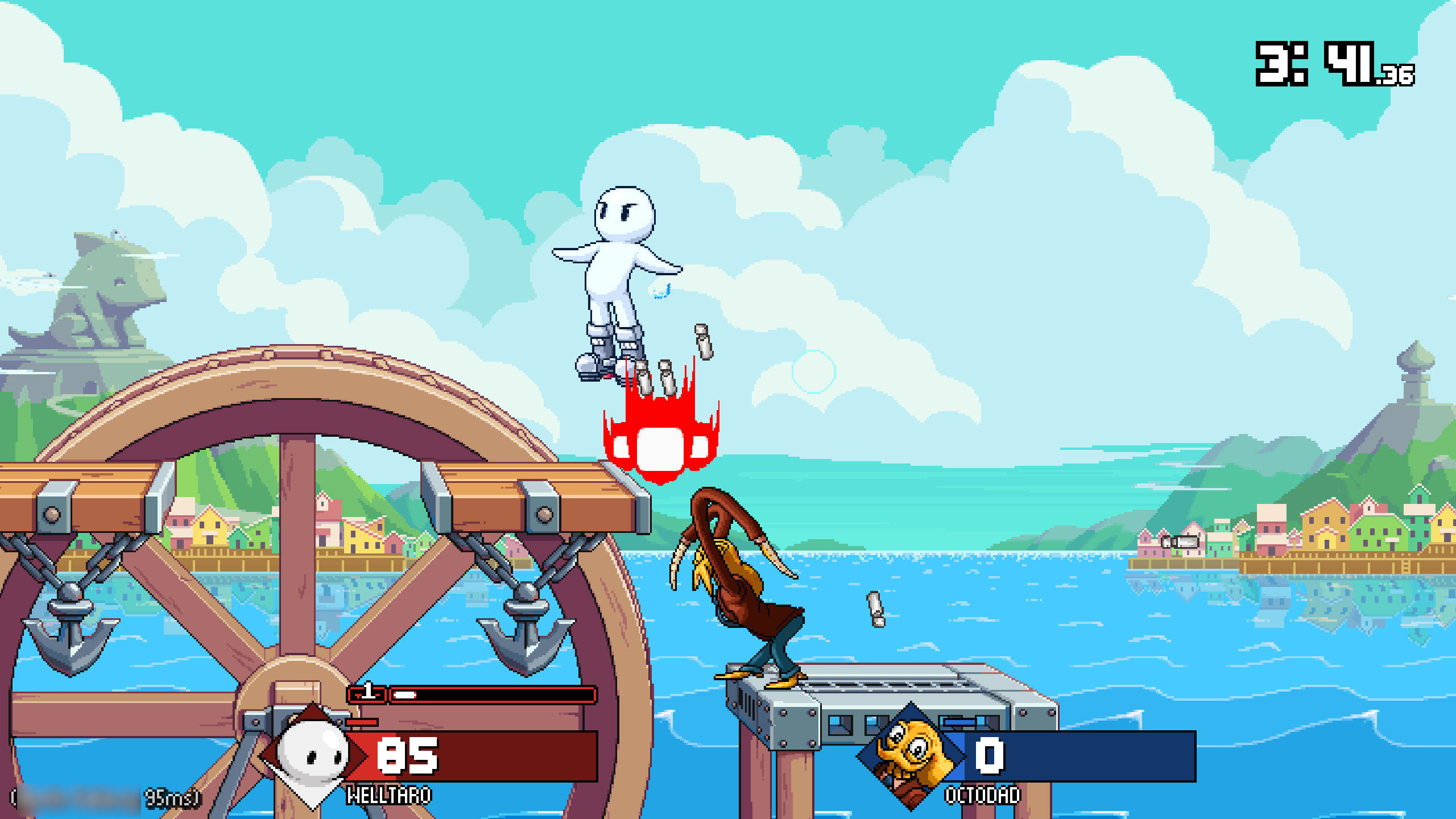 In the brief amount of time I’ve played so far, I’d say the gameplay isn’t that bad. In fact, it’s fun if you can actually find an opponent close enough to you that isn’t going to slow the flow of the game – which I’ll get into later. I would say the mechanics do feel competitive, at least somewhat.

I like the retro-y theme of the main menu. Music is pretty decent. Controls, as far as customization goes, is incredible – you can assign a shortcut button to wavedash or short-hop, for example. You could assign wavedash to the left shoulder button, and now you’ve made your life much easier when you want to quickly skid across the stage, without having to jam your fingers pressing the trigger down while inputting jump and diagonal on the analog stick all at the same time. (Yeah, that was a mouthful.) You have options for enabling or disabling tap-jump. You can enable or disable auto-dash, double-tap dash, or short hop with a quick jump press. Customize the deadzone and radius of the sticks and triggers. All of this and more. The point is, the customizable controls are definitely a praiseworthy aspect of the game. 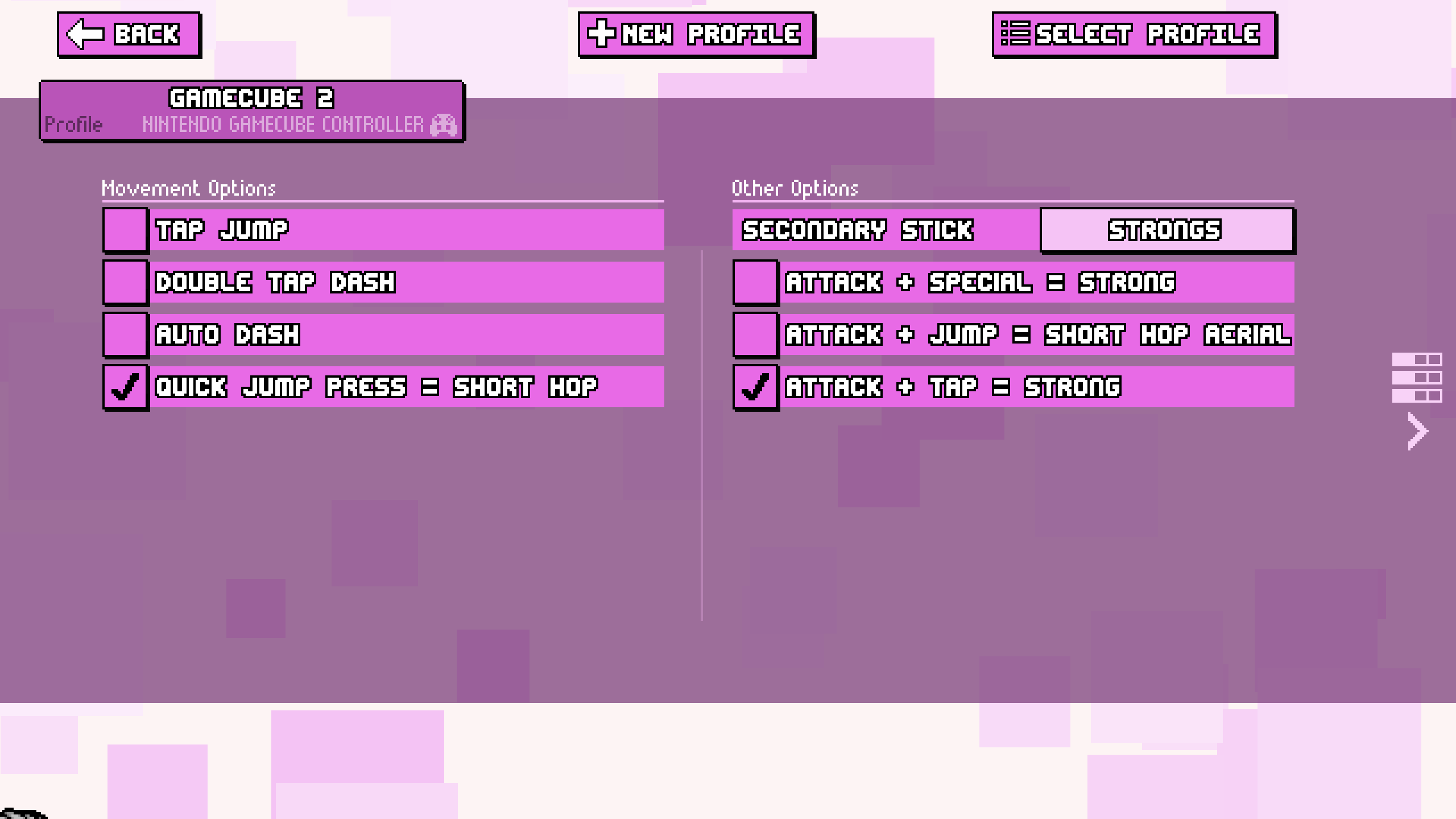 And yes, of course your GameCube controller adapter will work with this game. Just make sure to turn the adapter to PC mode rather than Switch/Wii U. 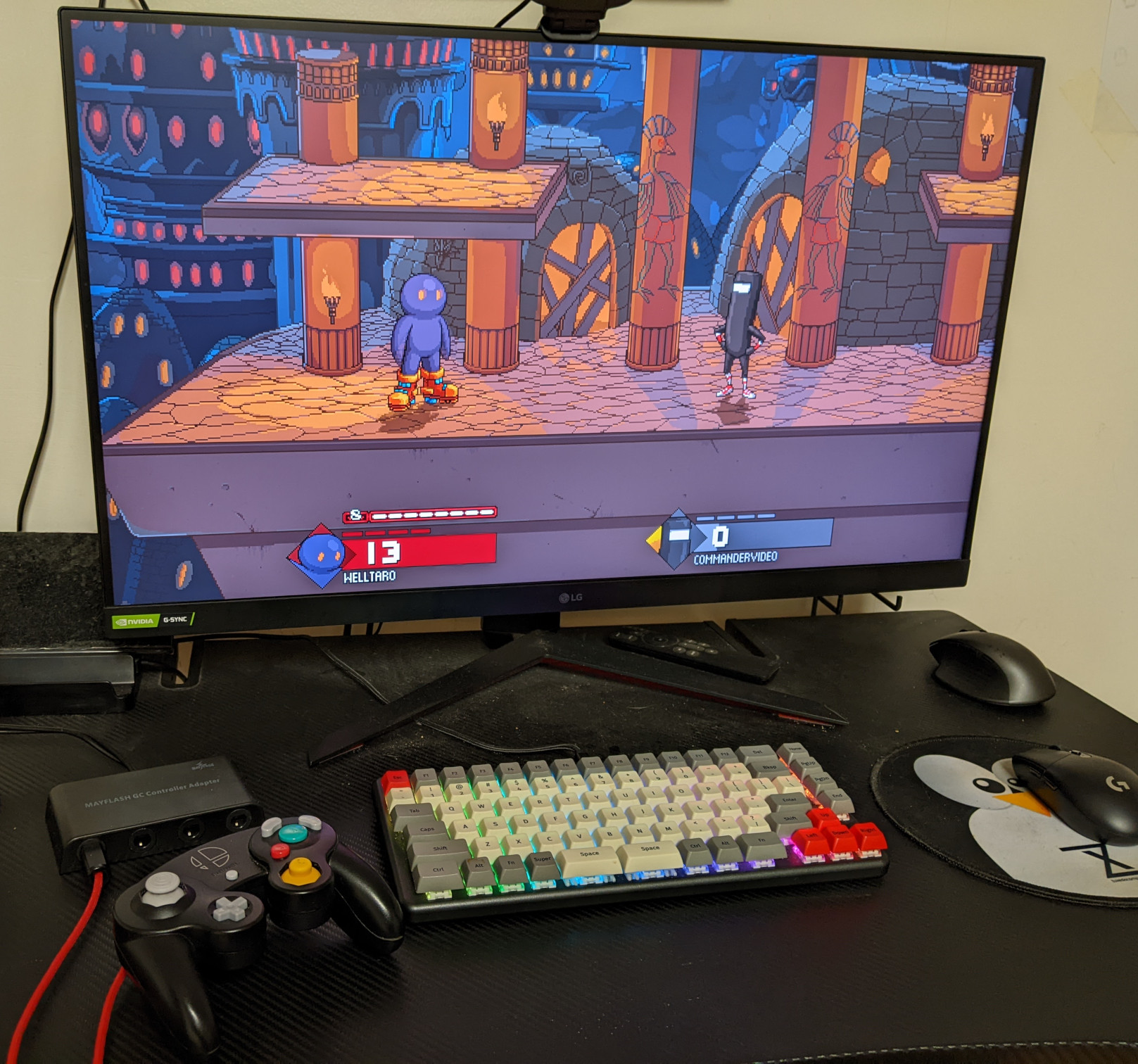 The graphics department is a little more barebones. I mean, with a pixel-art game I’m not expecting much out of the gate as far as low, medium, high settings, etc. You can change the resolution, enable or disable vsync, change the display mode to windowed, bordered fullscreen, fullscreen. There’s also an option to turn “pixel perfect (black bars)” on or off. I’m honestly not sure what it does, as I haven’t seen any difference between having it on or off.

As far as gameplay options, there’s color blind options, “shaking” for various on-screen elements, hit/dust/lighting effects, shadows. You can also customize whether you want the HUD at the top or bottom, and whether player outlines should be shown only in teams or all the time. The player outlines might be useful if you’re playing on Deck to help you see where the characters are. Hmm. I wonder if it might be worth combining the “Graphics” and “Gameplay” sections of the game together. At any rate you do have some options if you’re running the oldest potato computer that you’ve ever owned. (90s CRT, anyone? Less latency for gamepad input!)

There’s also a lot of customization when it comes to mod support. The game supports Steam Workshop. Here you can download and use custom characters, stages, assists, and music, adding further variety to the character roster and stage selection. What’s pretty neat is you can actually play online with these mods – when versing an opponent, if they have a mod that you don’t, you’ll be prompted to download it. After it’s been downloaded, now you can verse each other with mods. I have to say, Captain Falcon versus Game & Watch on Dreamland is, well, a dream come true. You’re basically playing a 2D version of Smash Bros. at that point. Oh, and of course I can’t forget to mention there’s native Linux support, which, based on my testing so far, runs great on Wayland with a 6700 XT.

I have to admit the asking price of $20 is a bit steep for what you’re getting, at the moment. The game launched in early access with:

Four characters isn’t much. Mind you, none of these characters are original – they are all from a different game. Orcane, for example, is from Rivals of Aether. Welltaro is from Downwell. I don’t know if the developers ever intended to make an original character in the first place. Perhaps not. The next two characters, the Watcher and Ultra Fishbunjin 3000, are also from another game.

Additionally, while every character’s hitbox has been coded, some of their animations aren’t fully “fleshed” in. Just take Octodad’s Down Special, for instance:

I know the game is in early access, but it’s kind of embarassing to have sketches like this without the animation being fully baked in. For a public product, I expect better, especially given 1) the numerous delays that have happened before the game went live and 2) the fact that McLeodGaming already has had prior experience in the platform fighting industry with their previous titles.

Sometimes it feels like matches can take forever. In a Commander Video vs. Commander Video match, don’t expect the match to end before five minutes. The knockback on their hitboxes could definitely use some improvement and be buffed.

Game modes are very lackluster. Just take the Training Mode as an example. Literally, change CPU level, and that’s all you can customize here. You can’t control how the CPU behaves, the speed of the gameplay, what damage percentage the CPU should be set to. Just, nothing other than your character, your assist, the CPU character, their assist, and the stage. Stage hazards can be set to “On” but then the only stage that will be available is just one. 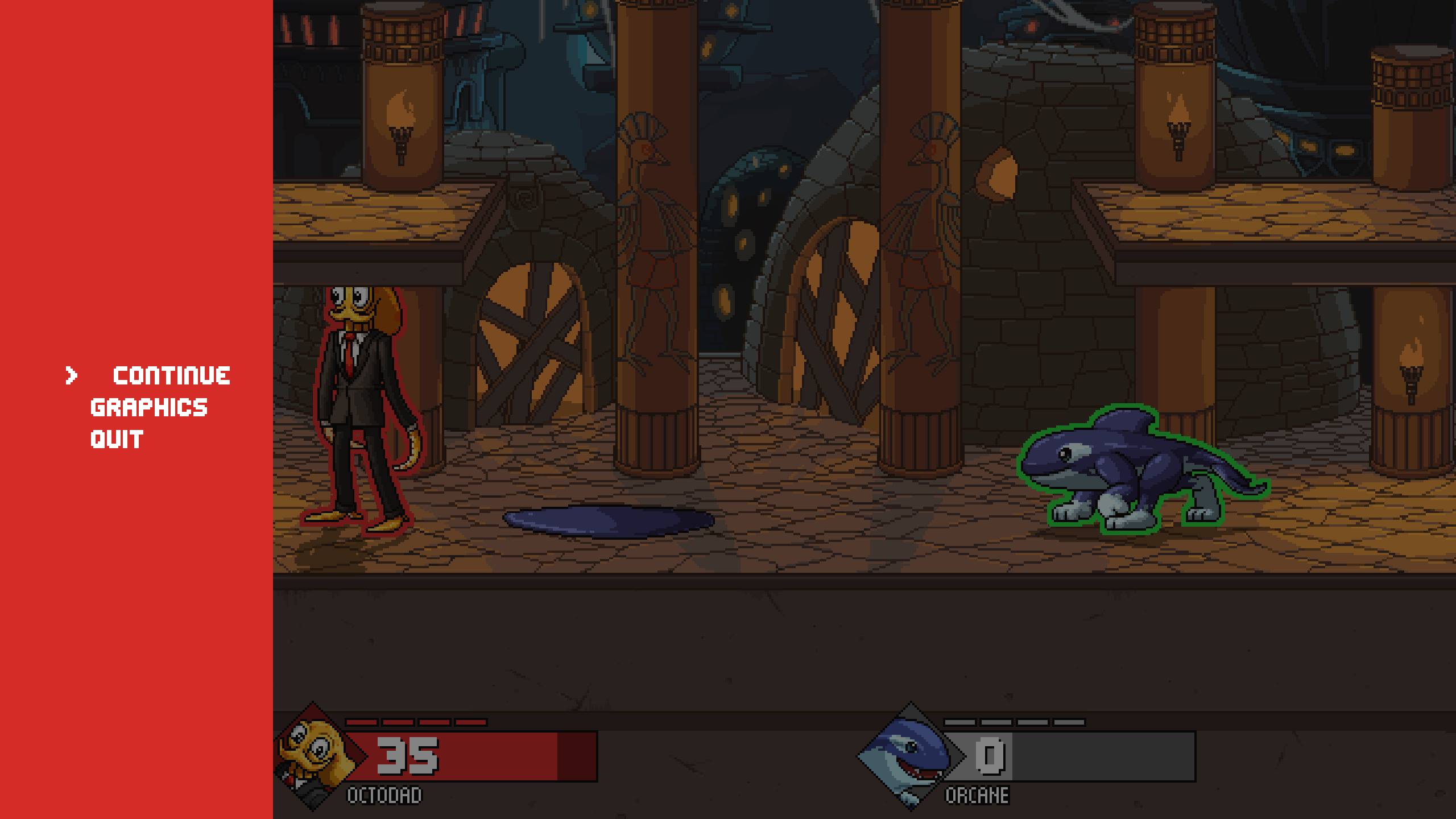 Playing locally, you can play with up to four players or CPUs. Change the time amount and the number of stocks, that’s it. Not even a “time” mode implemented yet. Everything is greyed out in the Match Options window, albeit for the time and stocks. You can’t even turn friendly fire off (not that I would anyway, but still). No story mode, but for a fighting game, I can forgive that; fighting games don’t really need one.

And sure, you can play online, but the netcode is hit or miss. Even though the game is supposedly making use of rollback netcode, if your opponent is too far away, expect your framerate to slow down to a crawl. Even if you do manage to find someone relatively close, the netcode still might not be reliable enough. Last night, the game was filled with lobbies. Now? There’s less than half the number. And why does the rollback netcode have to be turned off when joining a lobby with custom mods enabled? Not to mention the softlock that I got after I used the game’s rollback stress test.

I’m still not done talking about online. I’d like to see this option in the future: a filter where you can see what lobbies are password-protected and which ones aren’t. Half of the lobbies I tried to enter were password-protected, and I had no way of verifying this ahead of time. Oh and look, an option to “Search and Filter” is there, but of course, it’s greyed out. 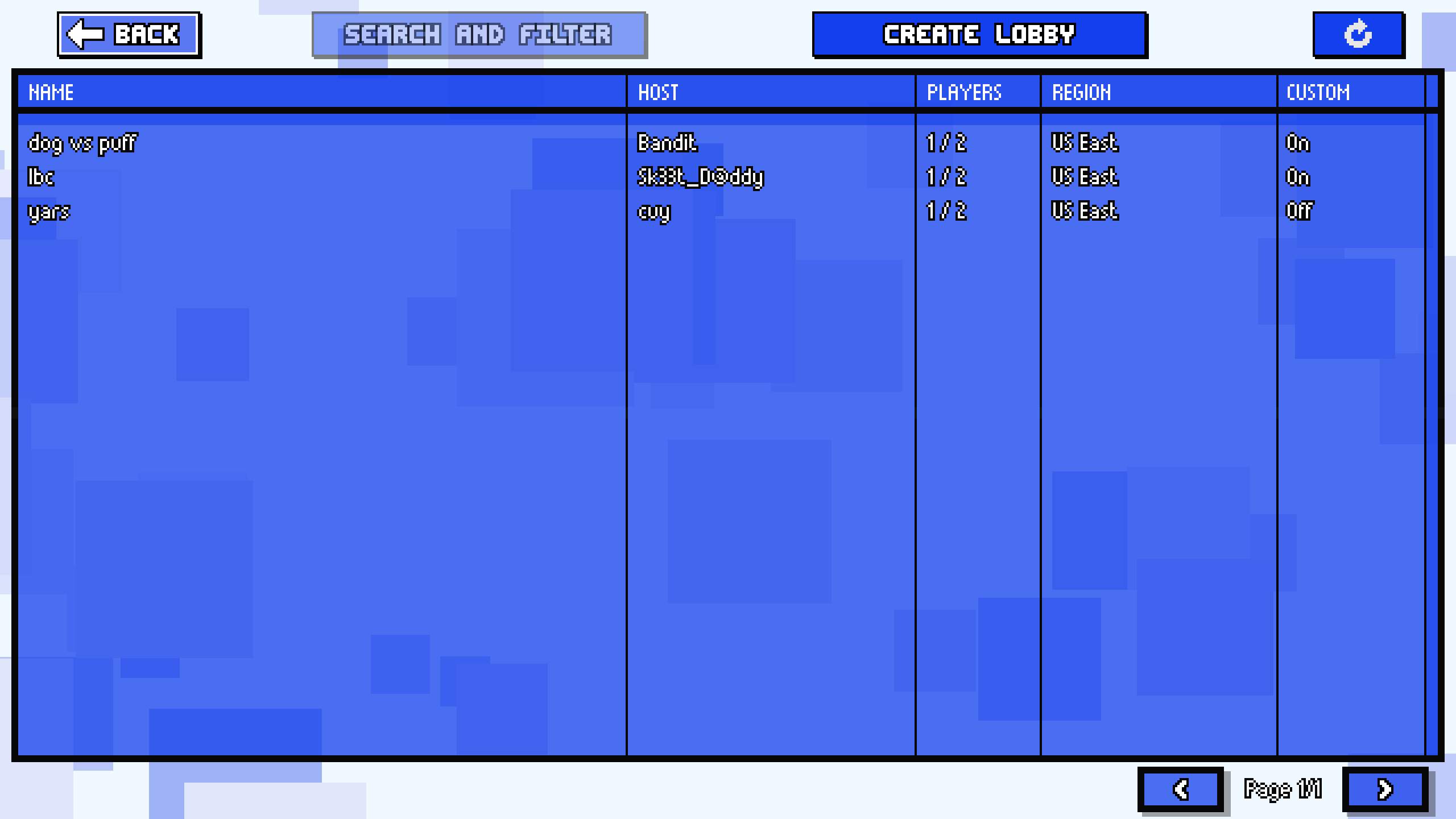 Another improvement I’d like to see is, say for example you open up a four-player lobby. You wait for someone to come in. You can start the match if you want, but now you’re kind of “locked in” with the player count. Nobody else can come in and join, unless you exit the character selection screen. Forcing you and everyone else to wait while twidling your thumbs rather than play a match. I’d like to see this as being more robust and allow players to join the lobby while the players are playing a game, then they can come in.

Did I mention there’s no taunting and no victory screen for the characters?

Heh, do I really need to comment on this? Works out of the box. No fuss whatsoever. 1280 x 800 resolution is supported. You can turn the resolution down to 640 x 360 in the Graphics menu. Enable windowed mode and now you’ve got a more retro-looking game. Not only this, but now your Deck will be a battery sipper. Turn the TDP all the way down to 3 W for one-on-ones. Still get a crisp 60 FPS. With four players, you’ll need to bump it to 4 W. Maybe 5 W just to be safe. You’ll probably get at least six hours of battery life with this. 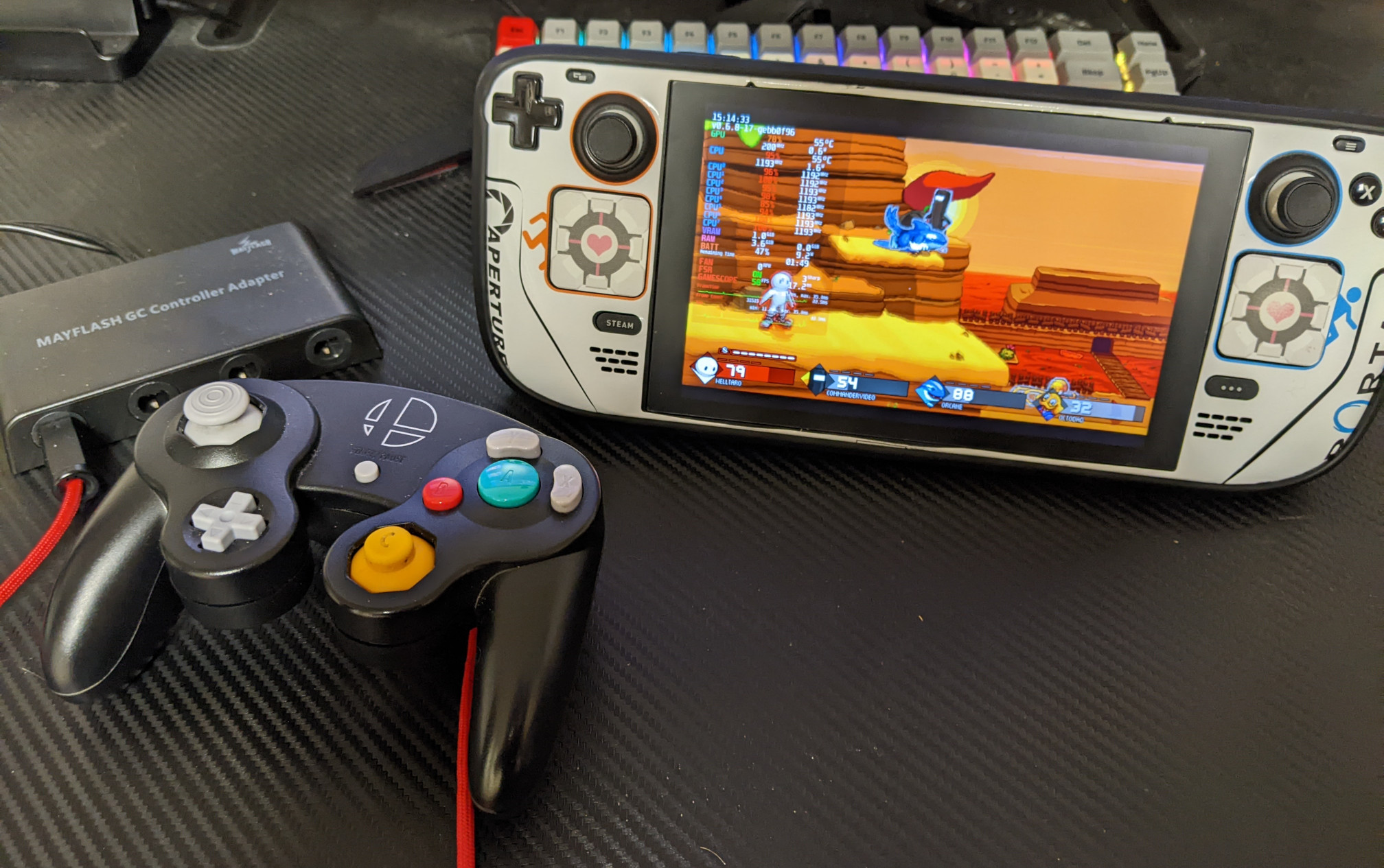 One note I’d like to mention though: you may want to disable Steam Cloud if you switch between your Deck and your desktop. The reason why I say this is because if you have a different resolution on your desktop, then play on your Deck, your Deck will carry those resolution settings over. The result is you may get a very odd-looking screen, and then when you try to change the graphics options, the game will softlock for some reason. It’s hard to explain. The only way you can change the graphics settings again on your Deck is if you go back to the game on desktop and change the resolution from there. 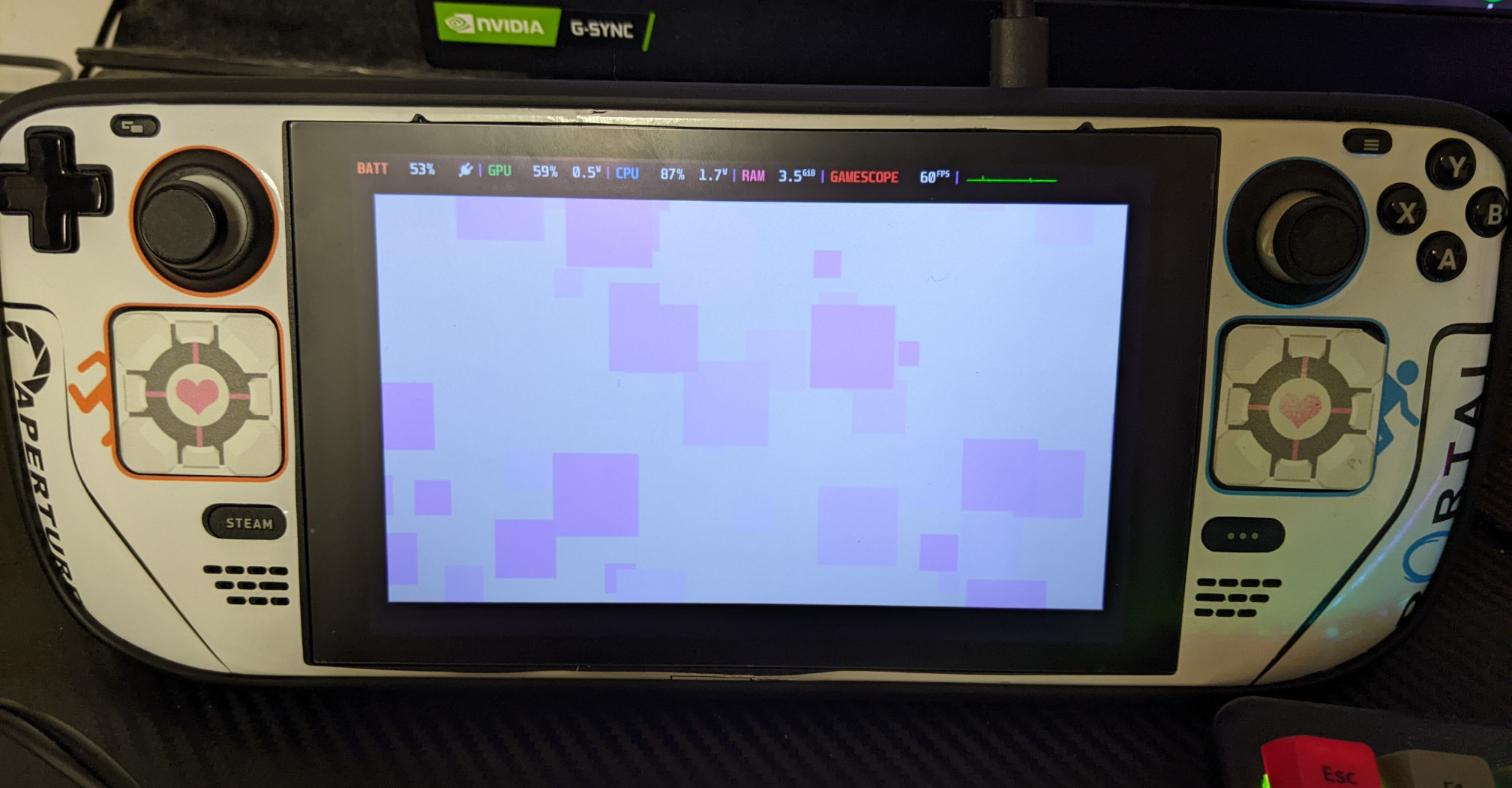 There’s a lot of issues with this game. Despite how many times the deadline has been pushed back, I feel like it still needed some more time in the oven before it went live. Unfinished animations, incredibly lackluster game mode variety, only four characters, and bad netplay are just a few of the quirks that have almost turned me off from the game. Not to mention some of the character’s hitboxes could use adjustment as far as knockback strength.

But I still like the game regardless. It’s fun to play, the modding community has already added a lot more characters and stages for increased variety, and you can use these mods online. The use of assists also increases the gameplay variety and for keeping your opponent guessing. And what’s not to love about native Linux support and great Steam Deck compatibility. 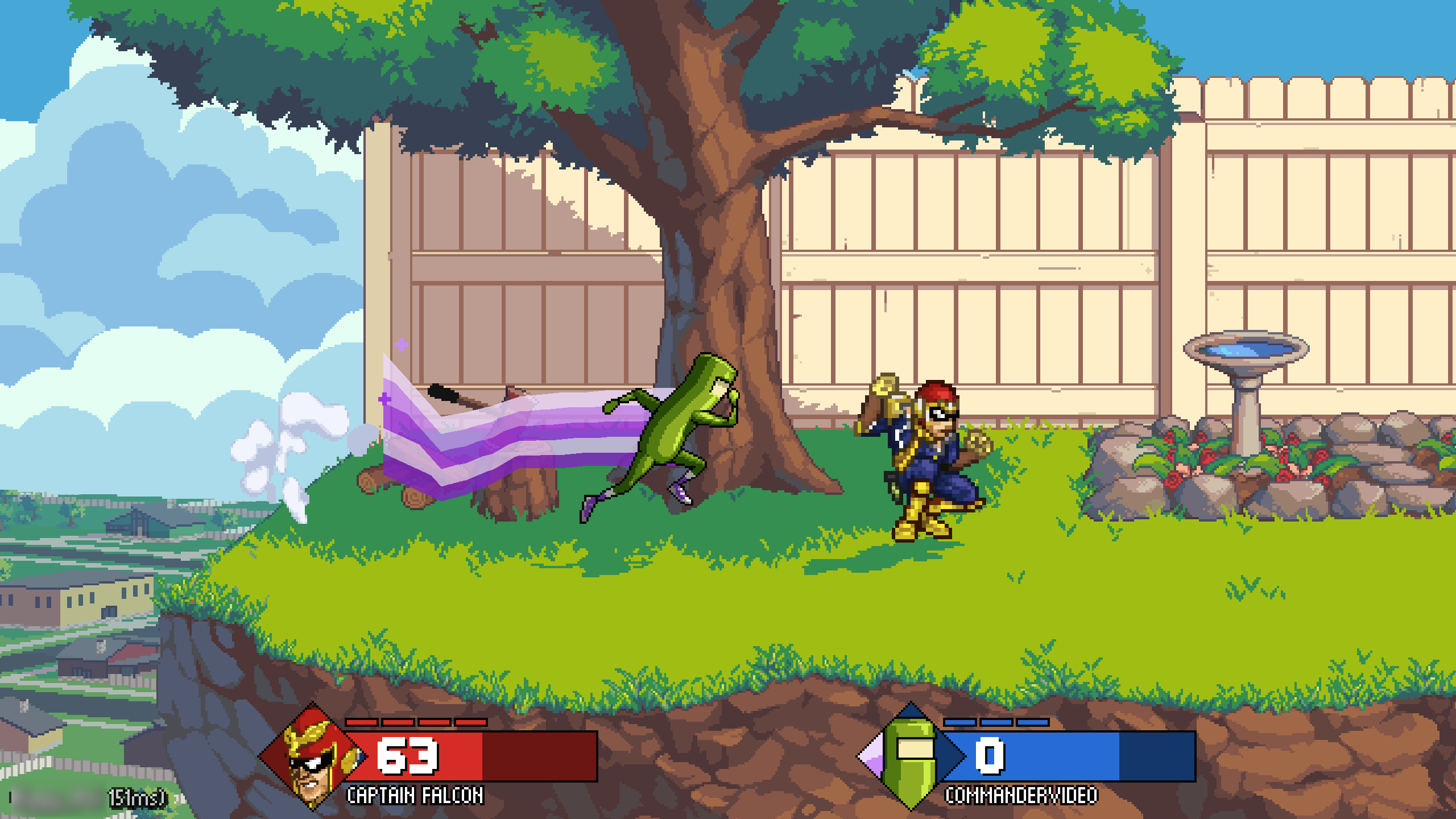 For now, I’d suggest holding off buying it. It’s not worth the $20 asking price. I think a more suitable price for what you’re getting would be $15. Of course, I have faith that McLeodGaming will iron out some of the issues I’ve addressed here over time, as well as adding more characters and game modes. Netcode definitely needs some improvement too. Only then will the game be worth your money. Either that or wait for the game to go on sale. Only buy it now if you’re a Smash Bros. enthusiast.

Fraymakers is available on Steam for $20.