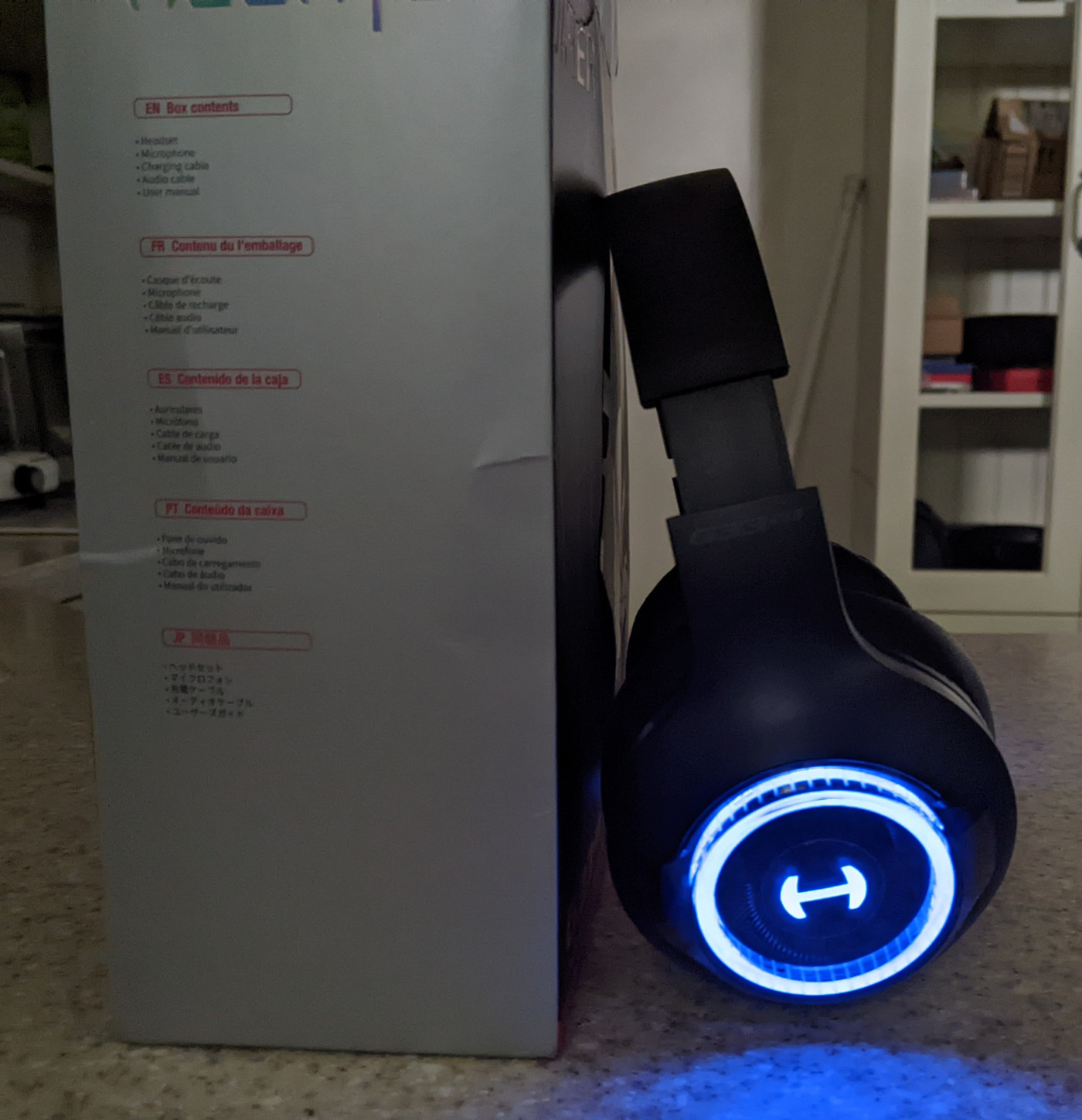 Welcome to LGC’s first hardware review! When it comes to audio, I’m a bit of an audiophile. I’ve owned several headphones; some were really good, others not so much. I’m particularly a fan of headphones that deliver deep bass. I recently discovered the Hecate G33BT from Edifier. Bought it on sale on eBay. I’ve never heard of the company before, didn’t even bother to check any reviews before I bought it, but I got it anyway.

The package arrived in pretty bad shape. One side of the box was crimpled. Fortunately the contents inside remained intact without blemish. The box came with the following:

Ports/buttons on the device include:

First impressions upon setting the headphones on my head is the light weight to it. The previous headphones that I used were definitely heavier. I don’t know how much heavier, but with these new headphones the lighter weight certainly makes a difference. It feels much better on my head, and as a result, puts less strain on my neck. The circumference of the hole where your ears go in is also a bit wider, another welcome change. The cushion surrounding the hole, much like any other set of headphones out there, has a leather finish. I can confirm I can have this on my head for quite a few hours and not report irritance to my ears or my neck.

Holding the “G” button on the right cup for three seconds turn the headphones on. When turning them on for the first time, it’ll go into pairing mode (there will be a female voice that says, “pairing”). On my desktop, pairing worked on Arch, but I was getting intermittent audio issues. I think that’s more so a problem with the Bluetooth card, not the headphones themselves. I later confirmed that this was the case when I paired the headphones to my laptop with Tuxedo OS. There were no audio issues at all when connecting to the laptop.

The headphones contain a 40mm driver. Listening to some tunes on Spotify, the sound was pretty good. I double-tapped the “G” button to switch to gaming mode. This time the music had a heavier bass to it. However, it sounded a bit oversaturated. The default music mode sounds much better. Makes sense, given the name to it.

That being said, gaming mode certainly serves it’s purpose when gaming. I played Splitgate with these headphones on, and I could hear where my enemies were walking. The gaming mode, at least to me, offers this more “surreal” experience where I can pay better attention to my surroundings. So each “preset” that comes with the headphones are good depending on what you’re listening to. And with the 60 ms response time, there’s absolutely no latency with either preset.

I like having a volume scroller rather than buttons, the latter of which which many headphones supply these days. A volume scroller allows you to more quickly adjust to the volume that you desire, and more precise at that. The G33BT has that. Plus, these headphones are LOUD. Like, if you have the volume all the way up, you’ll probably get deaf over time. 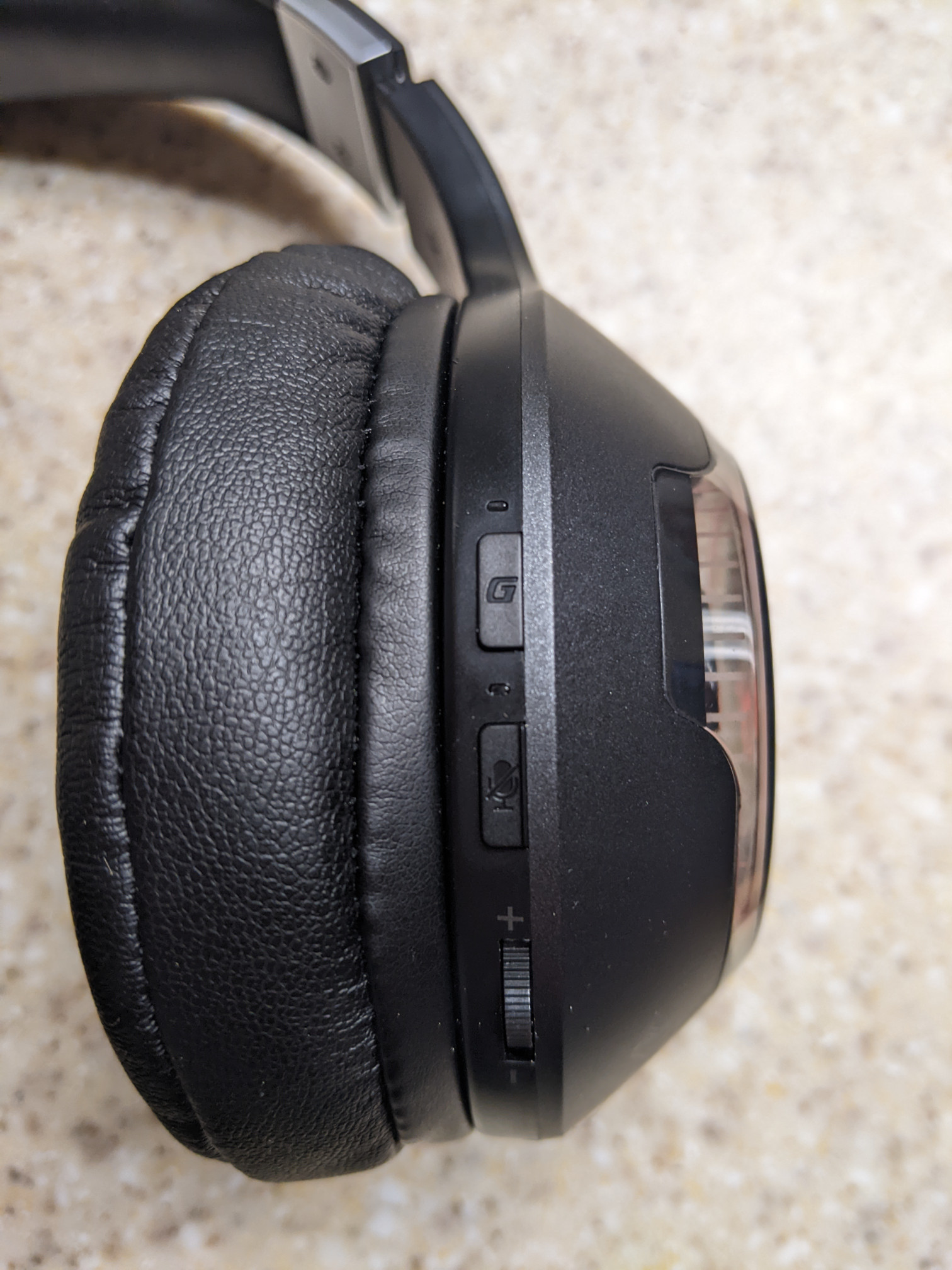 The outside of the cups have LEDs. By default, it pulsates a red color. By double-tapping the Mute button, you can switch between several colors, ranging from cyan, yellow, violet, blue, and a few others. You can also configure the LEDs to remain static, without pulsating, or have them pulsate to different colors. LEDs are pretty neat, for sure, but honestly, on headphones they’re not very useful. You’re not even looking at them when you’re using the headphones. And the LEDs are just a nuisance when you’re in your room in the dark, watching TV, with the LEDs glowing the otherwise dim area.

That being said, you can disable the LEDs by holding the Mute button for a few seconds. Disabling the LEDs will certainly help with the battery life too.

Speaking of battery life, Edifier claims the battery lasts 24 hours with the LEDs on, and 48 hours with them off. I think this is the first time where I haven’t seen numbers like that inflated. I genuinely have reason to believe the headphones last that long. I’ve gone to sleep with these things on, jammed to some tracks from Guilty Gear: -Strive- while lifting weights, and gamed with them over a series of a few days, all without charging the unit. Battery life came to 20% before I charged it. I didn’t count the number of hours I had the headphones on, but I’m pretty sure it was close to 24 hours. So yes, thumbs up for a solid battery life.

Not sure if I’m doing something wrong, but when connecting the mic to the left side of the cup, Tuxedo OS isn’t picking it up. No new audio input device is connected. That being said, I do praise the fact that the mic is detachable, and the hole on the left cup has a certain mechanism in place that prevents the mic from being accidentally yanked out. I’m sure the mic works on mobile. 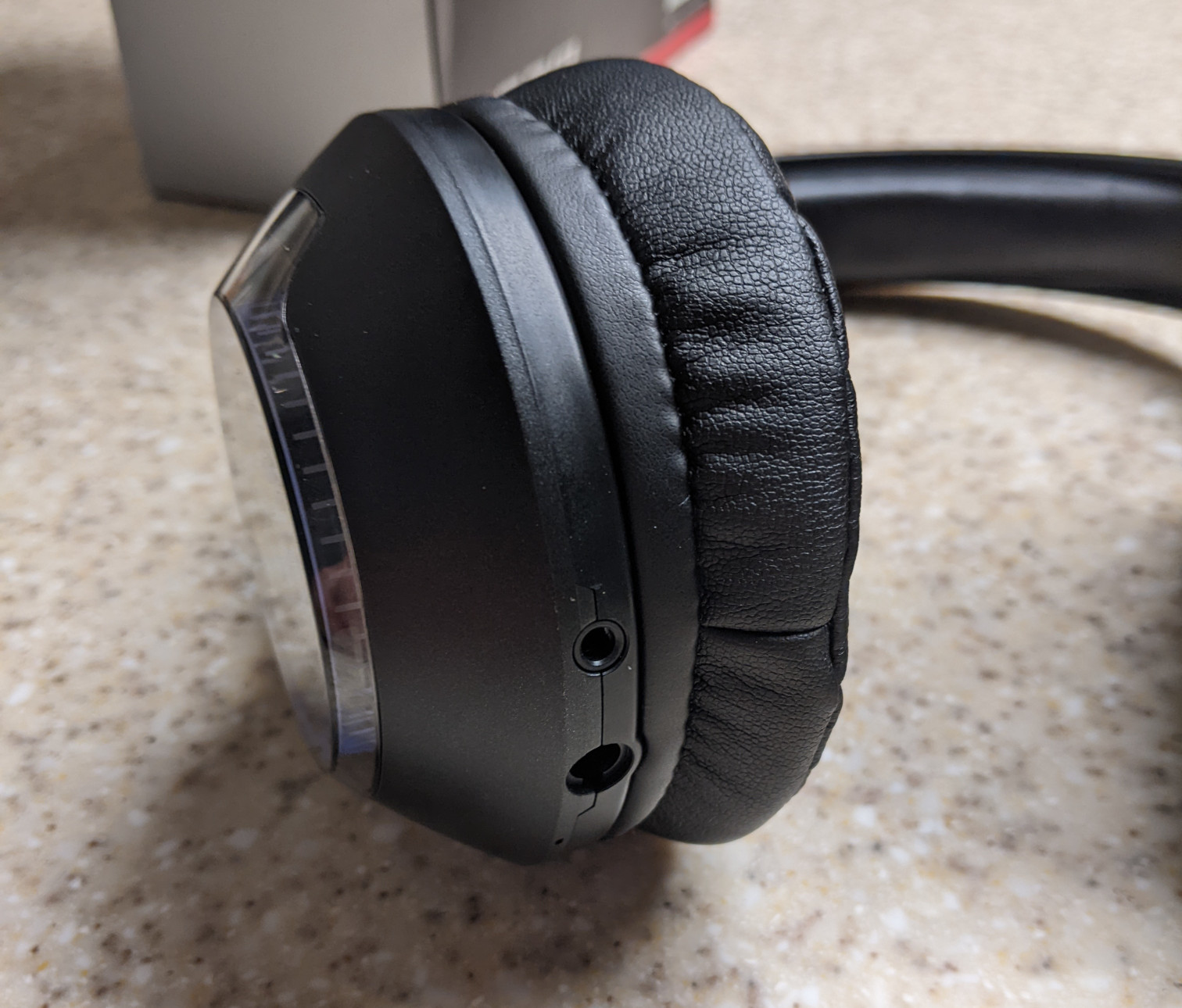 The 3.5mm audio cable stretches to about three feet. One connector is angled at 90 degrees. The cable serves well when your headphones are out of juice, but the disadvantage is you can’t change the volume on the headphones, switch between different presets, configure LEDs, etc. I would imagine the mic wouldn’t work either.

There’s another flaw with these headphones. Although you can pause and play a track, that’s all you can do. You can’t skip a track or go back to the previous song. That’s something that my other headphones had. They’re certainly useful when you’re mowing the lawn and you don’t have to take your phone out to skip to the next track. I’m kind of surprised they never added a couple of extra buttons for that, or at least program the existing buttons to do the same thing.

Is it worth the $80? Eh, a bit pricey. On sale for $30 though? Yeah, I’d argue it’s worth it. The sound quality isn’t spectacular by any means, but they’re good enough. The light weight is definitely welcome too, plus an incredible battery life that lasts at least an entire day. The music and gaming modes serve their purpose, one offering better clarity, the other for deeper bass and a clearer distinction between different sound effects.

For some reason I couldn’t get the mic to work on Linux. And there’s missing functionality for skipping a song or going back to it. The latter is a particularly glaring flaw. I’d certainly want to see that functionality added into their next set of headphones.

That said, if you’re looking for a decent pair of headphones, one that serves both your gaming and music needs, the Hecate G33BT is certainly on option (on sale).