Destroy All Humans 2! Reprobed – A Drug-Fueled Trip to the 1960s 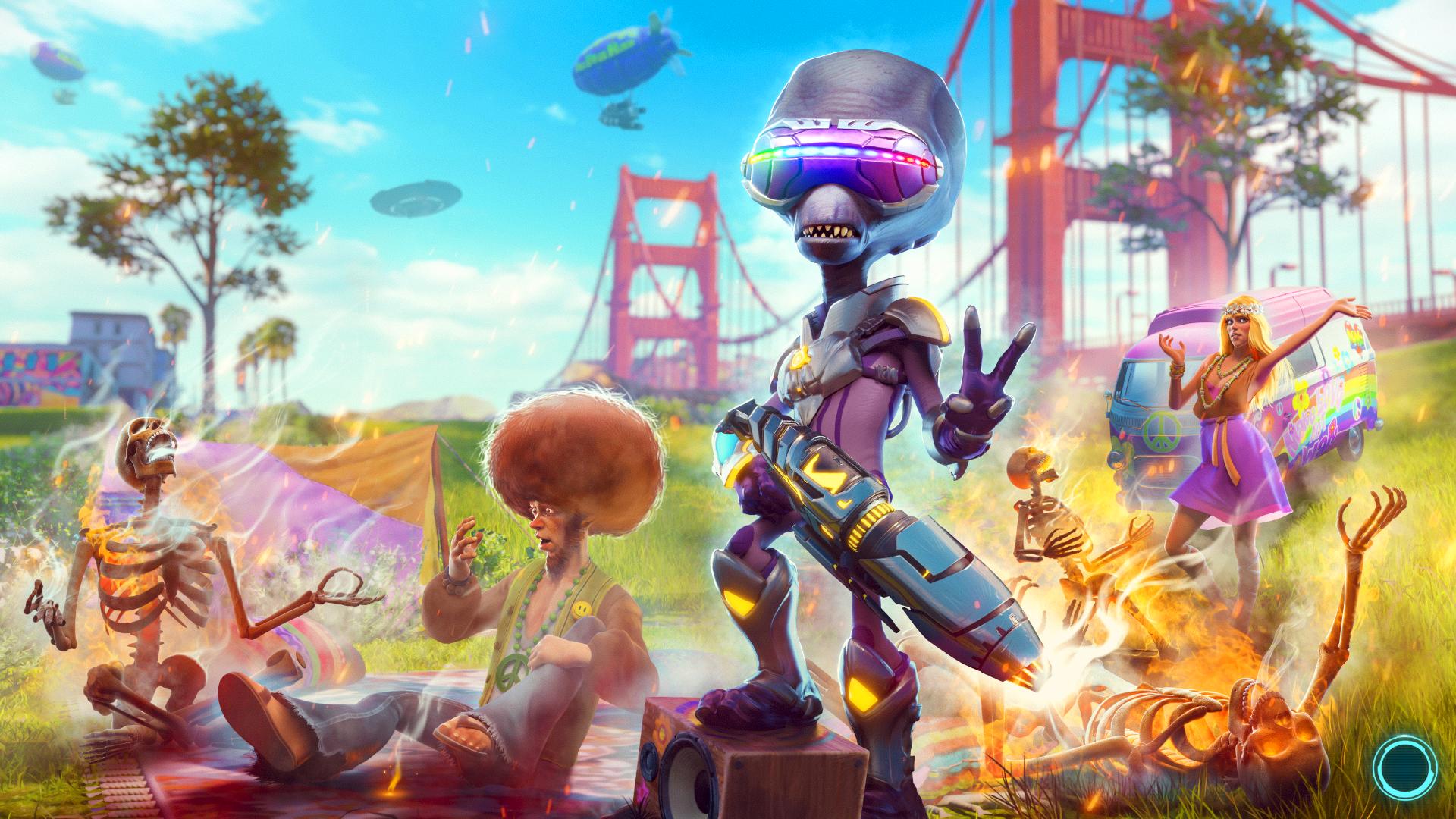 I’m not old enough to have personally witnessed the events of the 1960s. Pope Paul, Malcolm X, British Politician Sex. J.F.K. blown away, what else do I have to say?

But, if you happen to have lived and experienced the 60s, and want to see this period of time parodied, then look no further than Destroy All Humans! 2. The original took place in 1959. The sequel takes place in 1969. Peace. Love. Grooviness. Getting high on a drug called Relevade. Ninjas in 1969? Oh yeah, baby.

In the Destroy All Humans! series, you play as an alien known as Cryptosporidium 137 (or “Crypto” for short), who’s part of the Furon race. He’s come down to earth to harvest the DNA from humans, so that he can clone his species. In the second game, however, he has died. His clone, Cryptosporidium 138, succeeds him, and now he sports genitalia. And believe me, his genitalia is in action when he speaks to a woman in a skin-tight jumpsuit about teaching her the “Venus Butterfly.” He also poses as the President of the United States.

Destroy All Humans 2! Reprobed is a remake of the same game from 2006. The KGB see the Furon race as a threat to the Soviet Union, so they destroy the Furon mothership. Crypto craves revenge. So he comes down to the earth again to do so. Unfortunately for Crypto, however, he has to form a few alliances with the very species whom he comes to enslave.

Here’s my thoughts on the game after about 10 hours of gameplay. Proudly played on the Oryx Pro by System76.

The game is set in third-person, and you play as the alien I mentioned earlier. It’s semi-open world, where you can freely roam around cities and do your own thing, doing side missions, or completing the main objective. You might not want to get too close to a human though. If you do, they’ll call the police. Then the police will come over and try to shoot you down. That’s where the level of disguise comes in. See, Crypto, being an alien, has powers that humans don’t have. He can control the mind of an NPC and literally take over their body, whether it be an ordinary citizen, a cop, or a member of the KGB. And sometimes this will be necessary to talk to certain individuals, even if they’re too encumbered in drugs to realize that the body’s voice sounds just like Crypto’s. That’s just one example of the many superpowers Crypto has. He can lift a human or object up with telekinesis, then either throw them or slam them to the ground. He can make them forget what they were just doing. For instance, if they run to a telephone booth to call the police, he can intercept them and prevent them from doing so. He can pop the heads off of humans and collect their brains. He can make humans follow him. He can even read their thoughts!

I have to hand it to the developers for coming up with such unique and clever ways to destroy humans – or make them do your bidding. Get too destructive, though, and the threat level rises, and you’ll have to deal with increased hordes of police and tanks. Only disappointing aspect of controlling NPCs is if, for instance, you were to bodyswap into a cop, you can’t use his firearm. That would have been a nice feature to add. 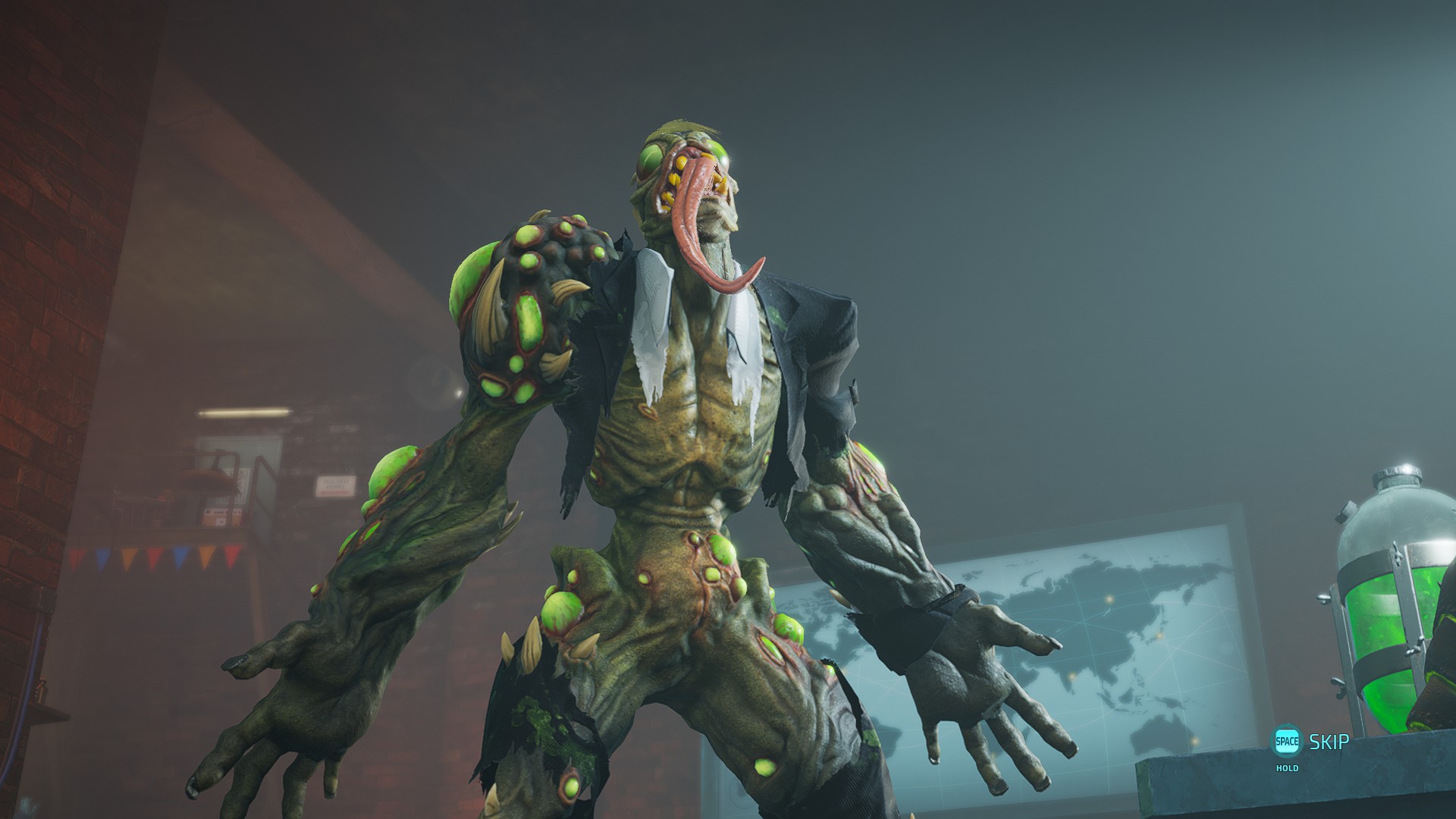 As I had alluded to earlier, however, some humans are going to have to be partnered with. Crypto won’t be able to reach the KGB otherwise. As such, he partners with the jumpsuit Natalya Ivanova, who, believe it or not, is a KGB agent gone rogue. Even though he may be alien, Crypto’s got feelings for her.

Missions are a bit dry. It’s usually, get to this location, scan a nearby NPC’s thoughts to get some clues, raid a base, destroy the KGB agents inside a certain facility. Side missions might have you board your saucer, pick up a groovy van with telekinesis, and drop it off on a rooftop.

Oh, did I say saucer? Yup, Crypto’s got one! This is yet another way to cause havoc on the earth, with fire weapons and anti-gravity weapons. The saucer also allows Crypto to enhance the various gear he has on hand, such as his weapons or his shield capacitor. 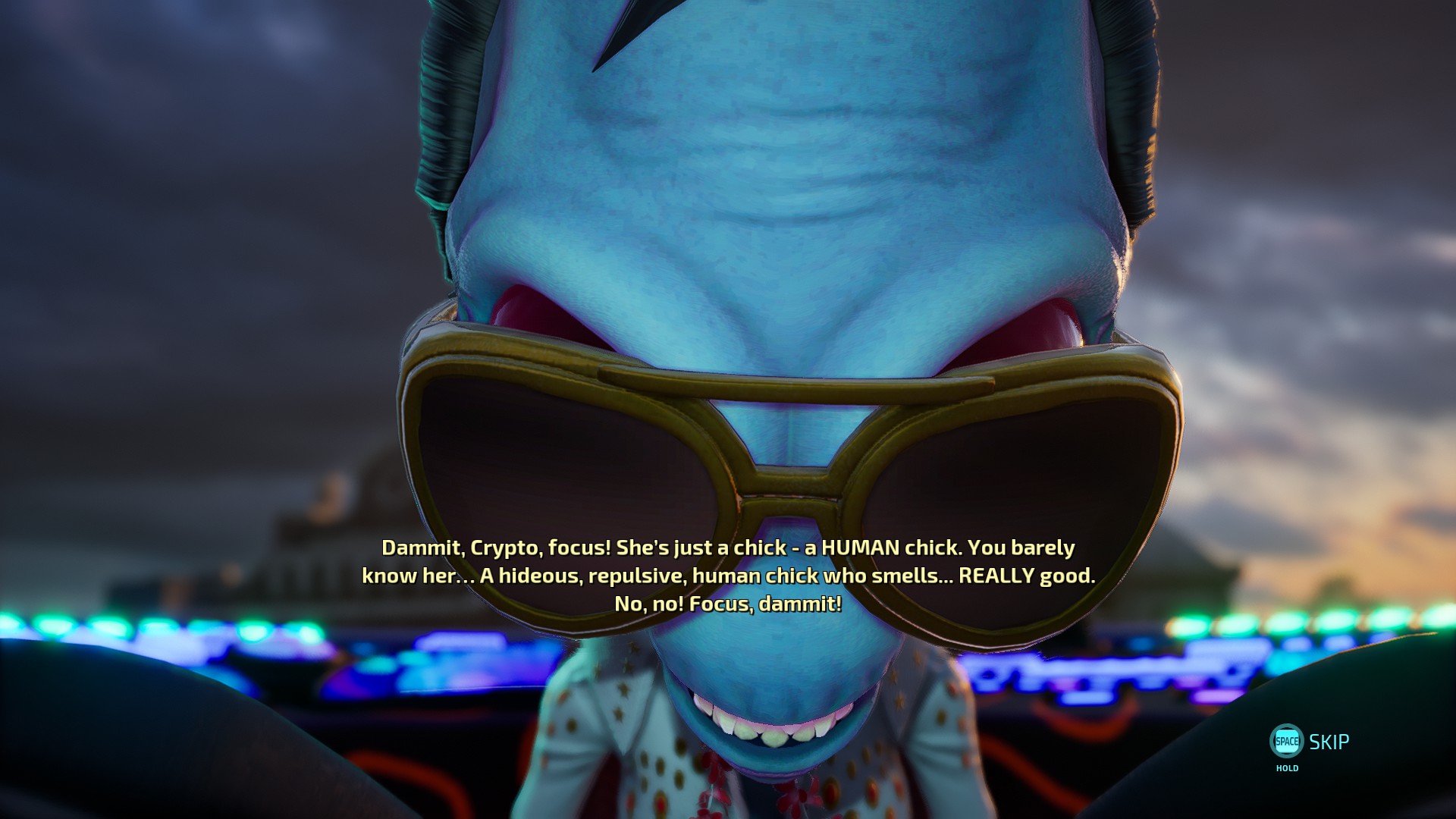 I haven’t played the game in its’ entirety. I’m guessing it probably lasts around 15 hours. At first I kind of wasn’t interested in the game, but the further I get into it the more absorbed I am with the story.

I do enjoy the humor in the game from time to time. While I wouldn’t say it’s comedic gold, the parodies it throws to the 1960s are usually on point. Crypto makes references to erectile dysfunction in certain cutscenes. Some of these cutscenes have a multiple-choice dialog as to what Crypto should say next. You can have him act like a smartass, get on people’s nerves, or just get right to the point. Actually kind of nice that you get to choose what he says in certain situations. Although, sometimes saying the wrong thing can lead to his death.

Those are my thoughts on the game for now. If I happen to finish it, I may update this review later. 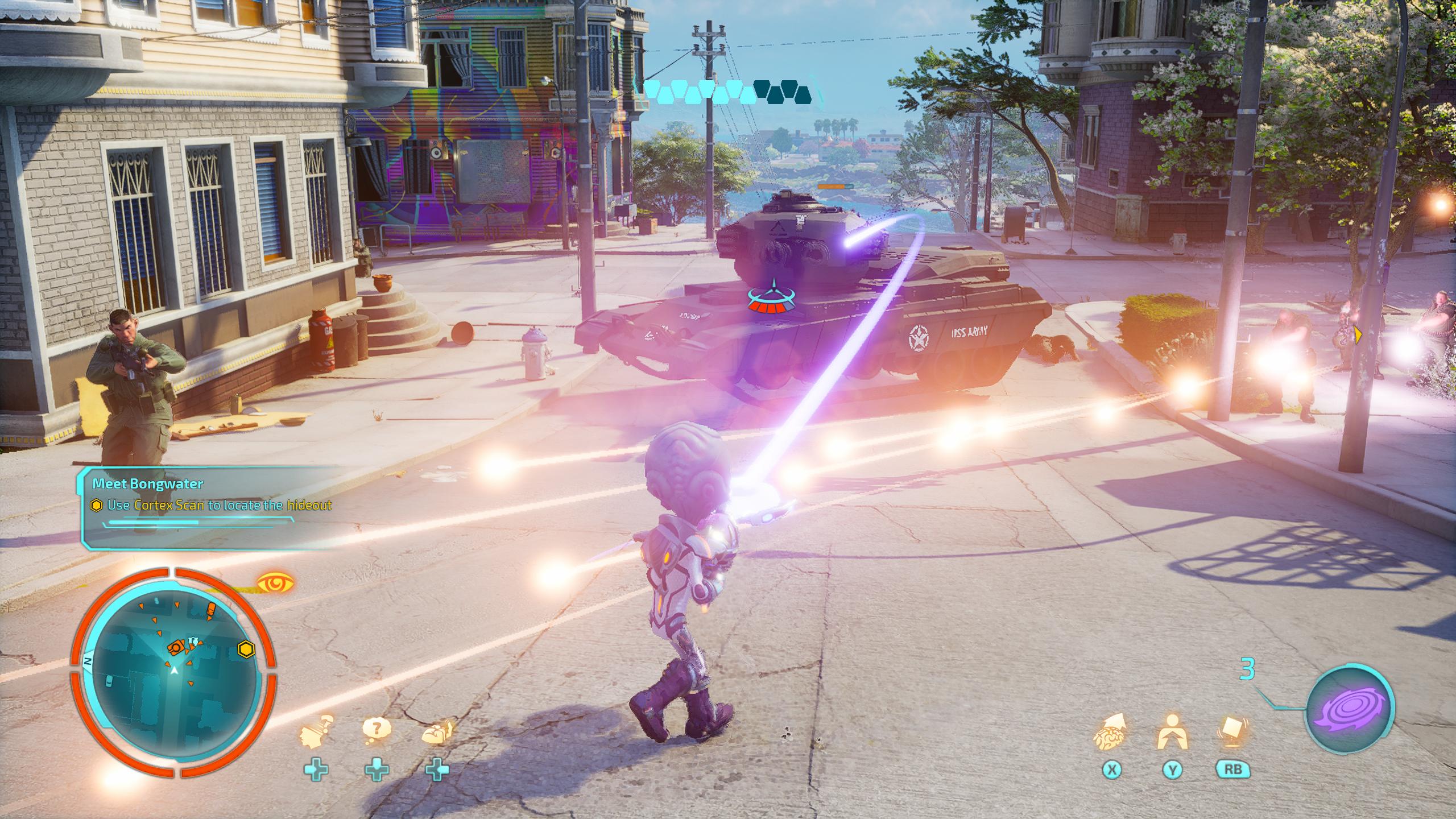 When launching the game, you’ll be asked whether to use DX11 or DX12. Use DX11. DX12 compatibility is a bit strange. As in, it won’t run on my Oryx Pro at all, but launches just fine on Deck. I should also note that every once in a while the game’s framerate will tank, for some unknown reason. I’ve found the only way to get the framerate back up is to verify the game’s files.

It runs out of the box with Proton 7.0-4. No need to use GE-Proton since there’s no video checkerboards. Controls are working as they should. 16:10 support is there. I recommend setting the graphics preset to Normal (I think it’s on Ultra by default) and setting the refresh rate to 40 Hz – the game generally won’t go past 40 FPS anyway. You’ll get about two hours of playtime on the default settings, so it may also be worth lowering the resolution and framerate, then upscale with FSR. You can look at Steam Deck HQ for a more detailed report.

Is Destroy All Humans 2! Reprobed worth it? If you want to take a fun trip back to the 60s, play as an alien with high tech, have plenty of creative ways to beat humans up, and get a couple of laughs from the cutscenes, then yeah, I’d say it’s right up your alley. Pick it up on Steam for $40.