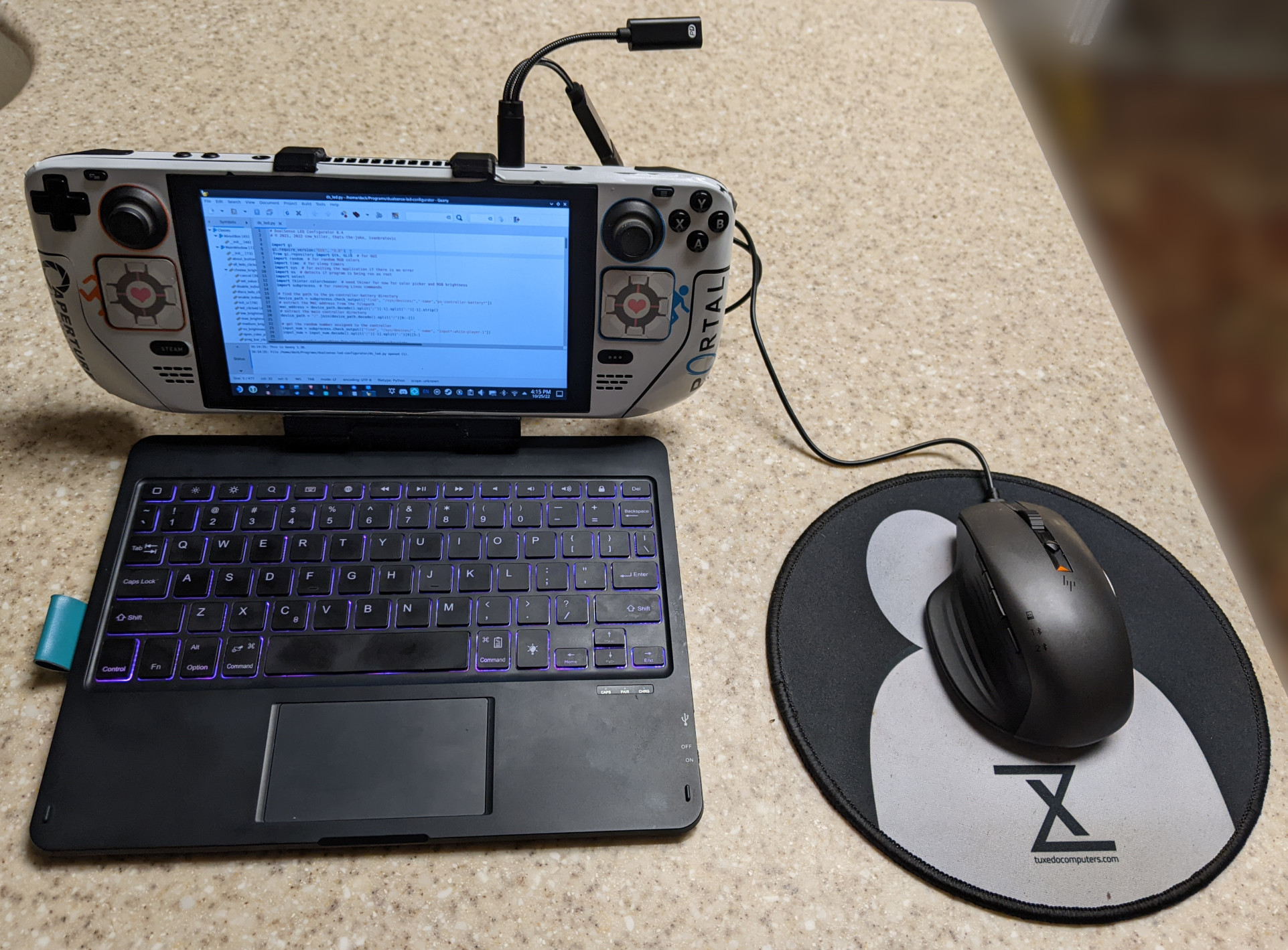 DeadEyeVR, the Etsy seller who sent me his Steam Deck USB-C hub, made another accessory for my review: the DeckTop. This is a Bluetooth keyboard with a built-in trackpad and a clamp for which you can attach your Deck to. So far, I’m pretty impressed with it.

They did a far better job putting this product together. With the USB-C hub/stand hybrid, it was little more than two off-the-shelf components slapped together with some adhesive. This accessory looks like a lot more work was done to keep it original. The branding with the keyboard is still here; it’s from WiWu. Basically a wireless keyboard built for iPads – that’s why you see the Command key rather than a Windows or a Super key. Though Steve from DeadEyeVR told me he would get rid of the branding and replace it with his own.

That being said, a blue ribbon was added to the left side for giving the USB splitter cable a safe place to stay (although, in my testing having the cable inside the sleeve has gotten in the way while I’m typing). The clamp for the Deck is definitely hand-made too. So this is more “original” in my opinion. 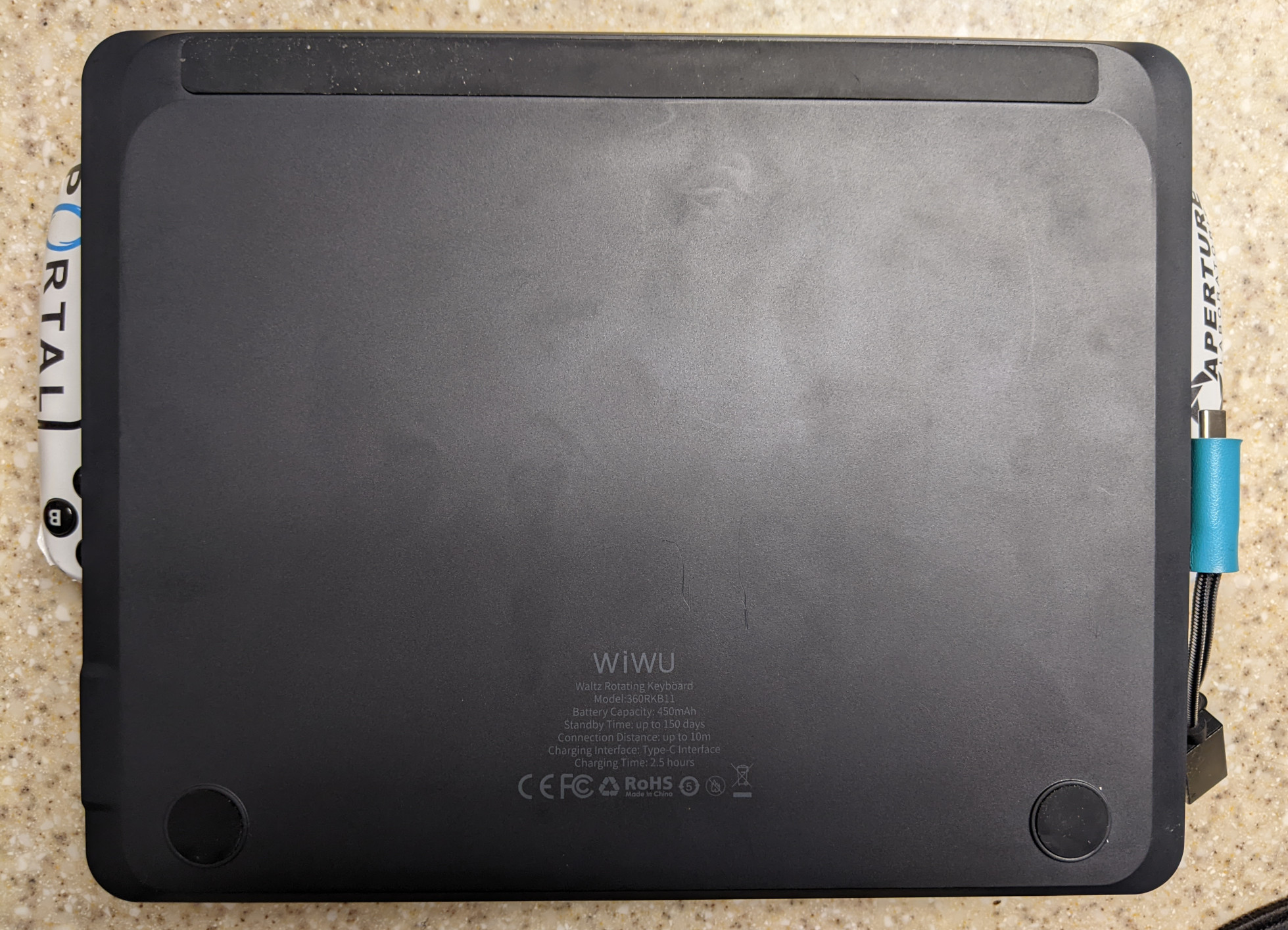 The keyboard itself feels pretty solid. It rests on a long rubber strip towards the back, and two rubber pads on the corners opposite of this. The keys are a little smaller than what you’d typically find on a desktop keyboard, but it hasn’t been too much of a problem for me as I type this review. I’m able to type just as efficiently as with my Launch keyboard. I’m not really noticing any latency as I type. It’s quiet as well, which is a nice touch. As for the material, it’s apparenty made of pu leather, assuming I have the correct data to look at. It doesn’t feel super-premium, but it doesn’t feel cheap either. It comes in a dark gray finish.

There’s actually no Function keys here; they are instead replaced with various icons, such as controlling media, audio volume, screen brightness, etc. They also allow the user to lock their screen, or use Plasma’s search function. If you hold down the Fn key, however, while pressing one of these keys, they will act as Function keys. The caveat you have to keep in mind is the top row of keys aren’t labeled with F1, F2, etc. – so you’re going to have to mentally count your way up to the fifth Function key if you want to refresh a web page, for example. 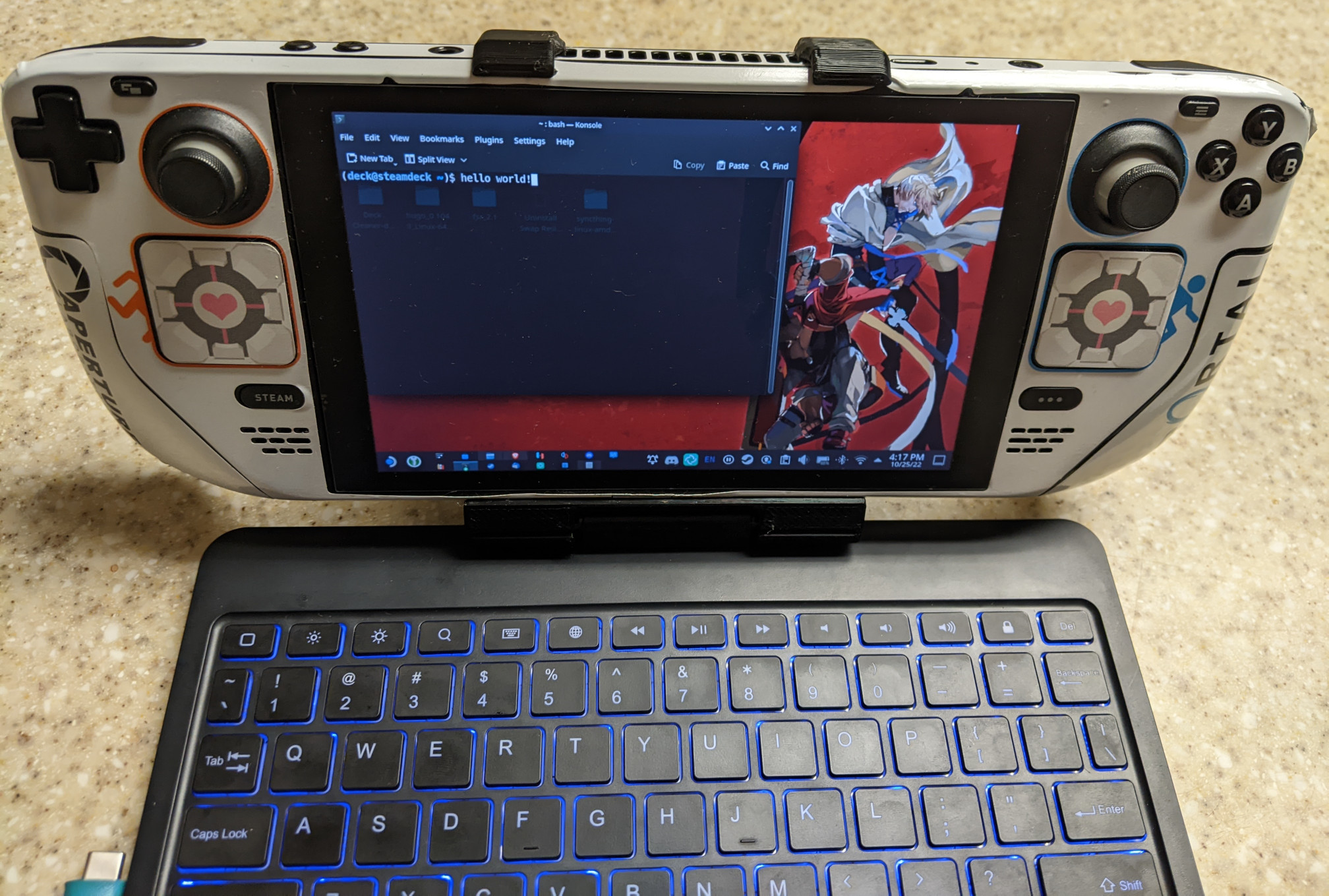 Another caveat is that some of these media keys don’t work. The browser and keyboard keys, for example, don’t do anything on the Plasma desktop, at least to my knowledge. A weird quirk that I also found is in order to press the Escape key, you have to hold down Fn + the top-left key. Finally, the keyboard firmware itself has its flaws. I couldn’t paste commands into the terminal, which requires CTRL + SHIFT + V. Pressing this combination does nothing. Neither does copying commands with CTRL + SHIFT + C.

I really like the backlight LEDs. They come in an assortment of colors:

The LED brightness can be toggled in three different levels by pressing the appropriate key. Holding this key down while pressing the Up or Down arrow key will shift between the colors. The colors are bright, and you’ve got the typical white backlight if the colored backlights aren’t your cup of tea. Alternatively you can disable the backlights entirely if you want to save on battery power. The only nuisance I have with the LEDs is that they automatically turn off after a minute or so of inactivity, and there’s no way of changing this, to my knowledge. While it might be useful for saving battery, it’s annoying when taking photos. 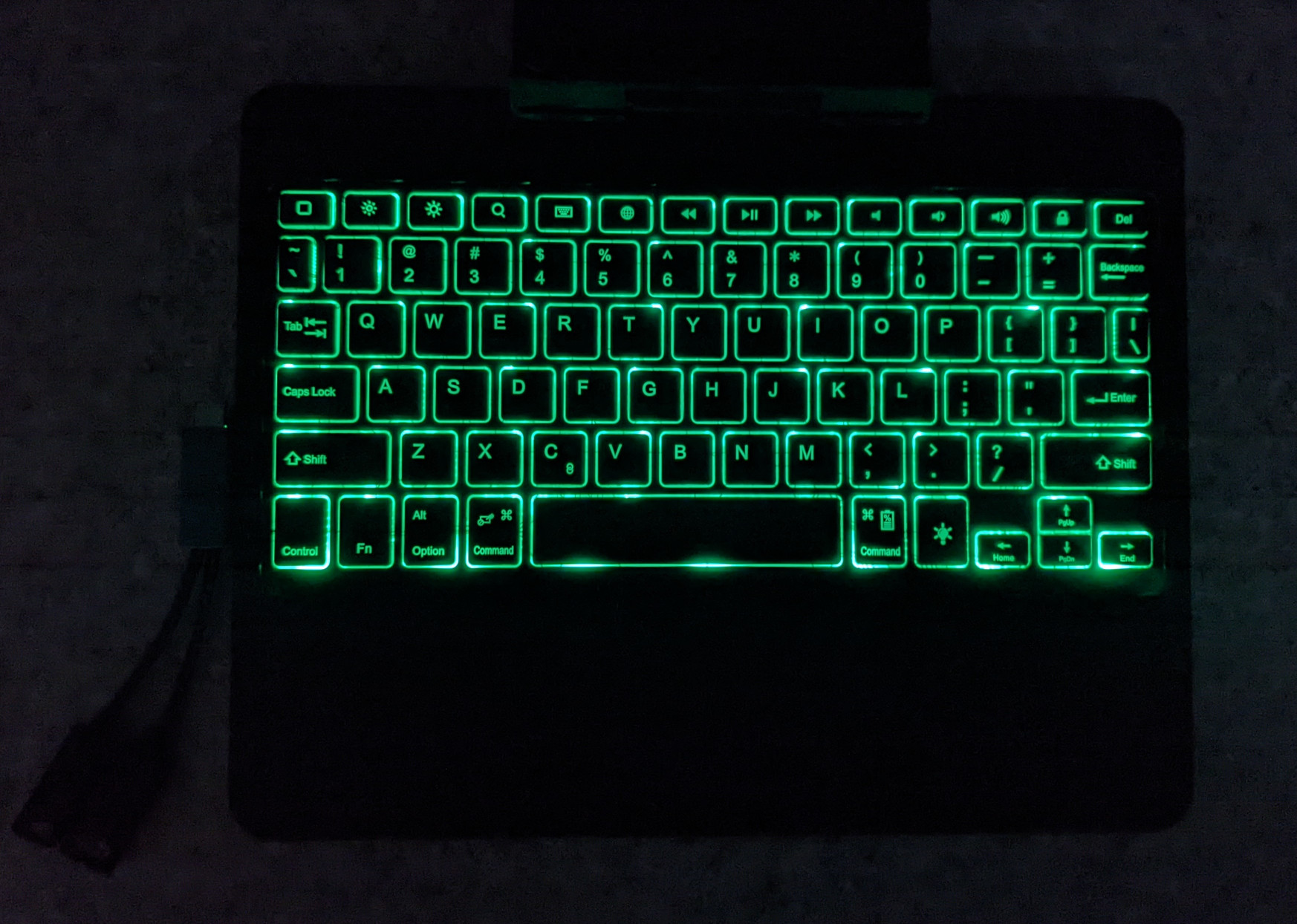 Speaking of battery, how long does the keyboard last on a single charge? Well, to be frank, I’m an impatient person. As such I haven’t spent the time testing this; it would take too long to get the review out. According to the bottom of the keyboard where the branding is, it lasts almost half-a-year at 150 days – but keep in mind this is when the keyboard is in “standby” mode. Probably meaning when the keyboard isn’t in use, the backlights are off, and someone accidentally flipped the power switch to ON without realizing it. I will say this, though: I charged this keyboard on Sunday, and it’s still kicking two days later, writing this review as well as the past couple of posts here on LGC. I would assume it will last at least a week while it’s constantly being used and the backlights are set to the highest brightness (although, looking at the battery percentage now, it’s at 24%).

Some other specs about the battery you may be interested in:

Admittedly I haven’t used the trackpad much. I’ve mostly been using a mouse. But I can say the trackpad has a premium feel to it. It’s a little small for my liking, but it gets the job done. No buttons are provided for left- and right-click, but you can imitate these functions by putting pressure on the trackpad. A single finger does left-click. Lightly tapping with two fingers does right-click. Scrolling a web page up and down is possible by lightly dragging two fingers across. Typical features you’d find on any trackpad, really. And it’s certainly better than nothing if you don’t have a mouse lying around. 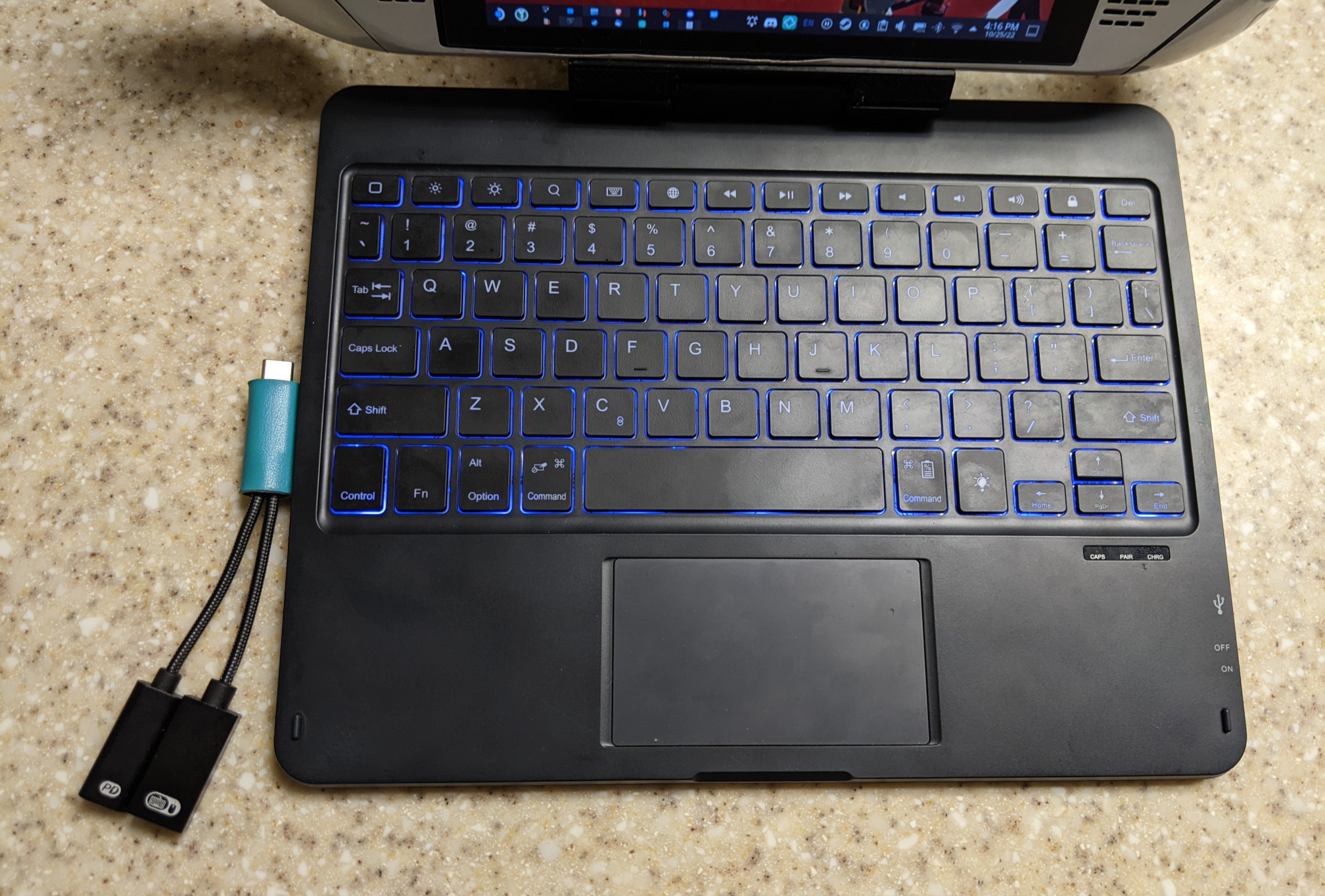 If you want to use a wired mouse, that’s actually possible with the USB splitter cable provided in the package. You connect one end to the USB-C port on the Deck, then connect the mouse via USB-A on the other end. A USB-C connection is still provided should you want to charge the Deck simultaneously. Pretty clever!

The nice thing about the clamp is that it doubles as a battery bank holder, while also being narrow enough so that it doesn’t cover any of the vent holes on the back of the Deck. On the backside, there’s a couple of notches. By inserting the velcro straps provided with the package into these notches, you can wrap them around a power bank and secure it in place. Now you’ve got extra power with you wherever you go! You can use the supplied USB-C cables for connecting the power bank to the USB-C port on the Deck. 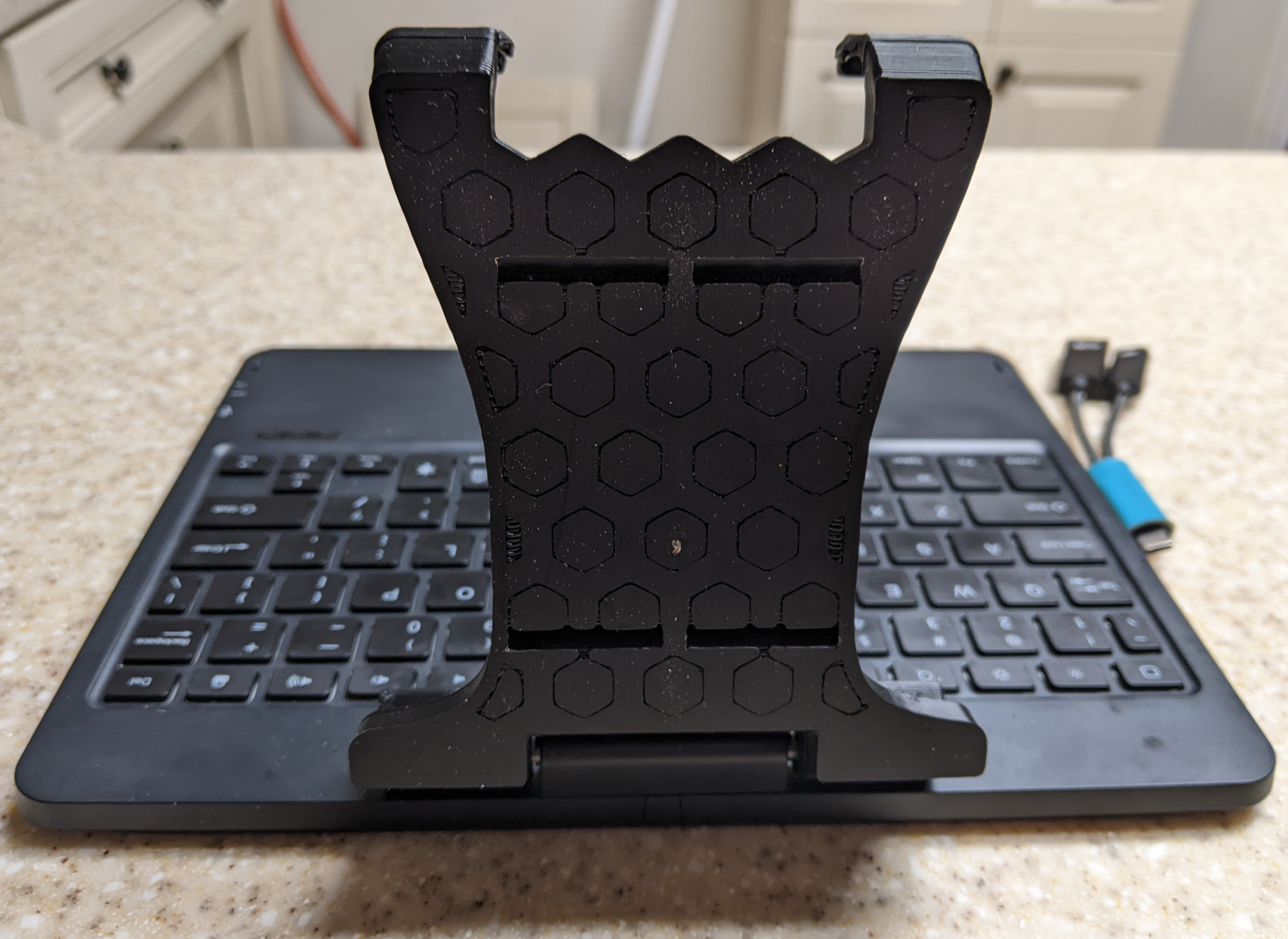 I like how adjustable the clamp is. You can tilt it a full 360 degrees. You can turn it around 180 degrees and there will be some pressure to make it tilt any more; this keeps the clamp secure. You can also tilt it down. This way, the keyboard will essentially act like a cover for the Deck, although it’s a little long with the trackpad.

One caveat that you have to keep in mind is, depending on the weight of the power bank you’re using, this may cause the keyboard to tilt upwards, since the weight will be greater than what the keyboard itself can bear. As such you will need to tilt the clamp close towards the keyboard rather than pushing it outward. 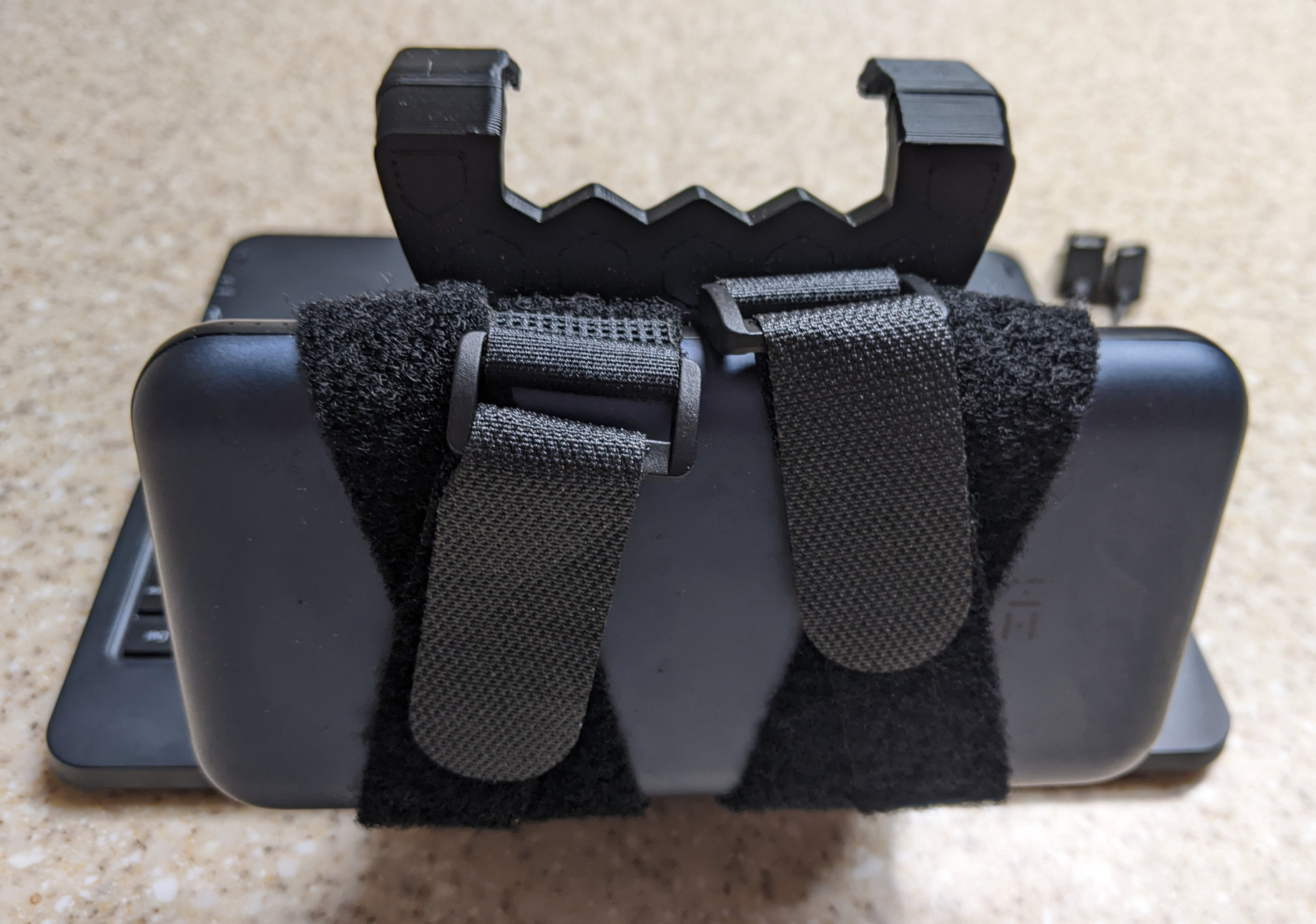 The clamp itself is a little tight, to be honest. You have to first put the leftmost and rightmost vent holes on the top of the Deck into the little clips, then push the bottom of the Deck in until it “clicks” into place. While this definitely makes the Deck secure in place, you have to be careful how you go about clamping it. The force needed is a little excessive. The same caution has to be applied when taking the Deck back out. I’ve scraped parts of my Portal skin because I didn’t exert enough caution when trying to take the Deck out.

That’s an interesting idea. We may explore that; depends on how useful people find the trackpad. Another issue is finding a Bluetooth keyboard that can do what we need. It’s possible but we’d have to look.

In regards to the clamp, I’d love to see it as detachable. That way, if I want to bring the Deck with me on the go, I can just take the clamp with me without having to lug around the keyboard, while taking advantage of the straps on the back to hold the battery bank. It would also be useful if I just wanted to use the keyboard itself for other devices, without the clamp getting in the way. The good news is that Steve told me that this is actually in the works, but is “a ways out.” 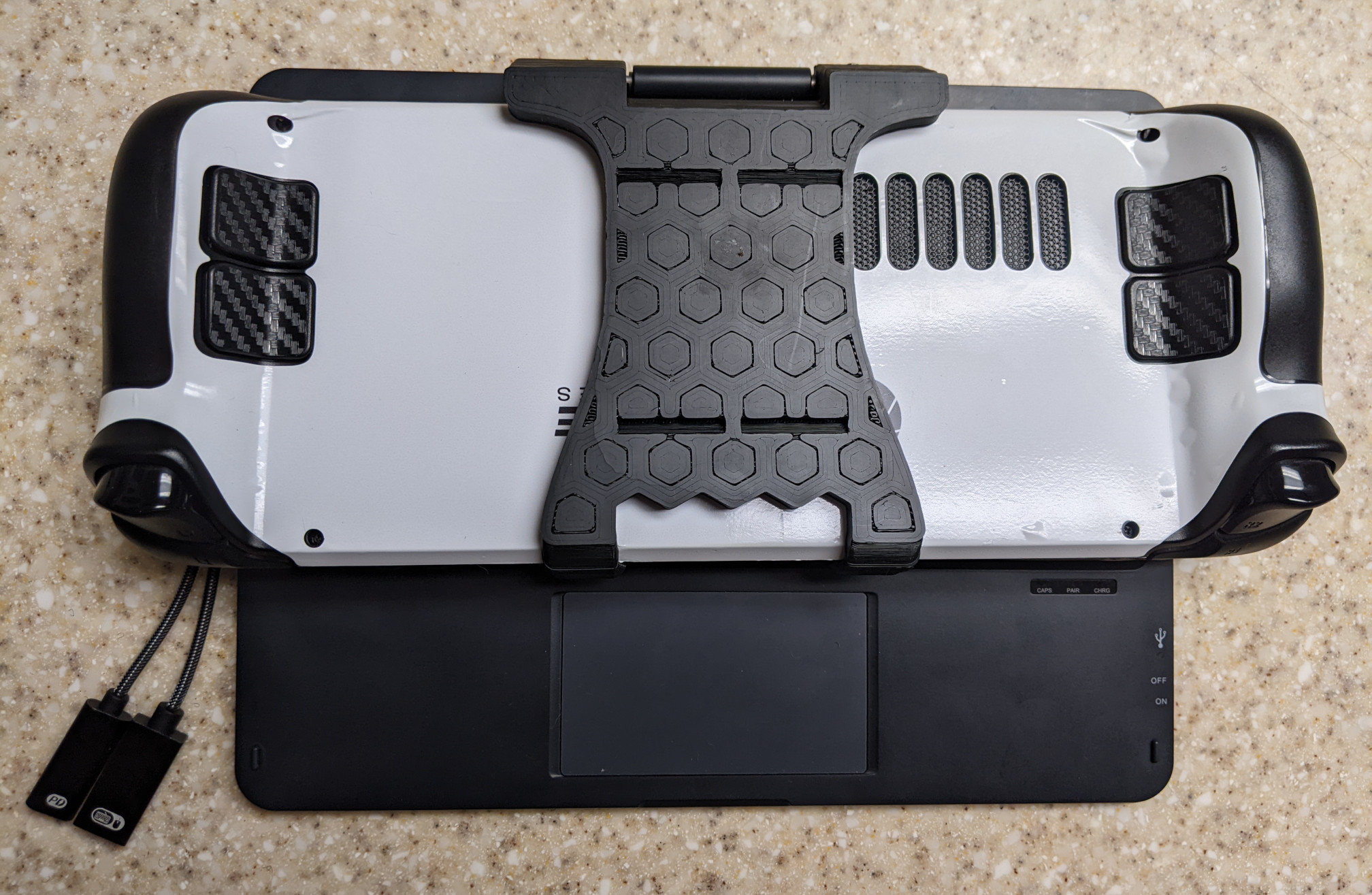 In the meantime, you probably could technically take the clamp off by removing the rubber padding that’s on the bottom of the keyboard. There’s likely a screw in there that you can undo to remove it. Not that I would recommend that though.

Obviously I’d also like to see three-key combos working, as well as the media keys that don’t do anything. Being able to quickly move to the beginning or end of a line of text would also definitely help. As to how exactly that can be worked on, I’m not sure. Perhaps software could be created for it? There’s probably a script file or two located somewhere inside SteamOS that would allow us to customize the behavior. Having the keyboard LEDs constantly on when there’s inactivity would also be nice. 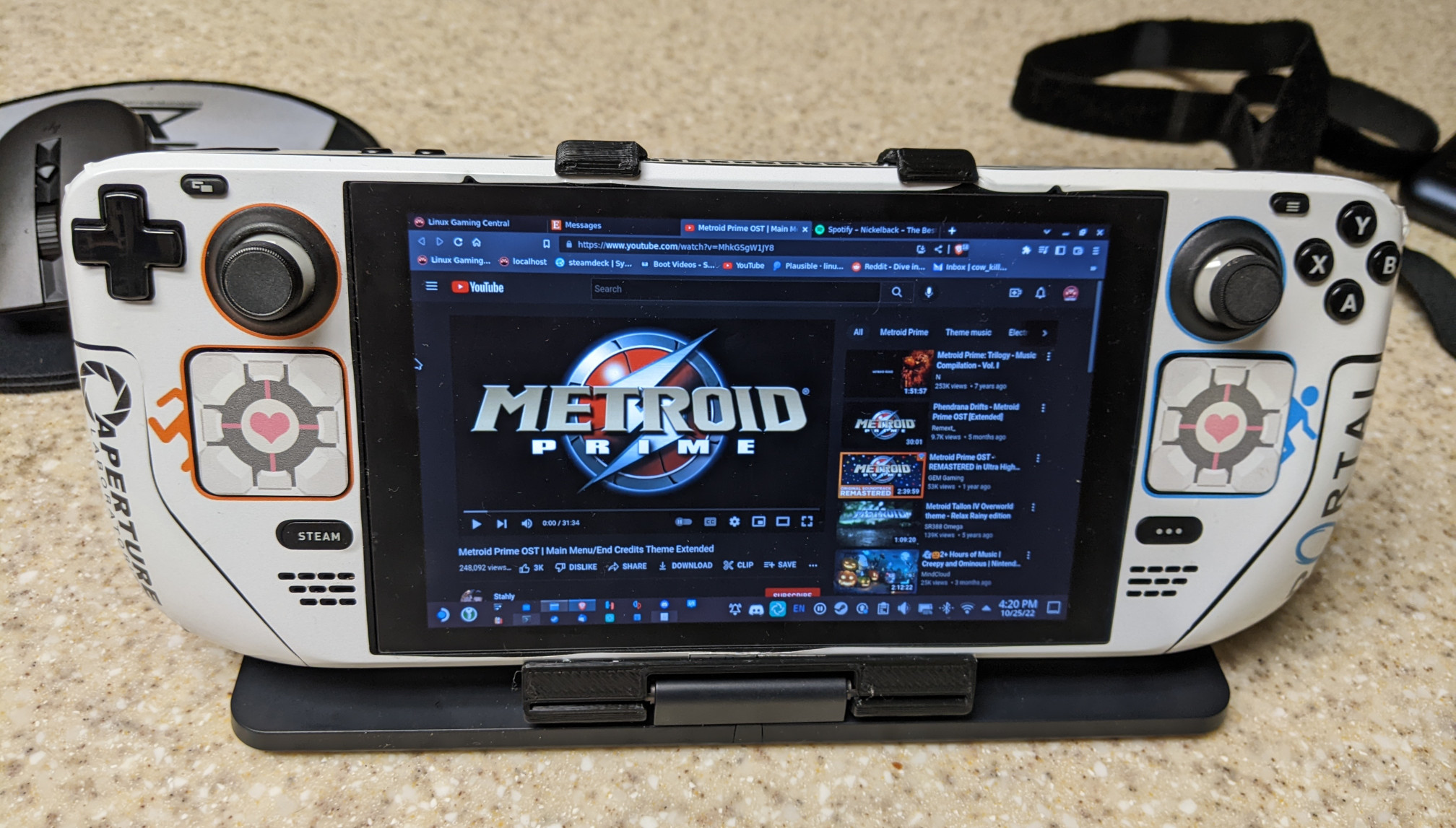 Aside from some of the keyboard quirks, it’s actually quite nice. Typing on this is a breeze. It’s also fairly quiet. The trackpad is a nice bonus for when you don’t have a mouse lying around. The backlight LEDs are pretty spiffy.

The clamp, while it may be a little tight, will definitely hold your Deck in place. It provides a nice experience, making it easy to see your screen while you’re typing. The swivel makes it easy to turn the Deck around in whatever angle you prefer, and you can set it down too to make the keyboard act like a cover for the screen. I don’t think I would feel comfortable enough taking this with me to a coffee shop to get my work done; I’d probably look like a gaming nerd with the Deck attached. But that’s certainly something you could do, if you wanted.

The $60 asking price isn’t too bad. You can buy it on Amazon. 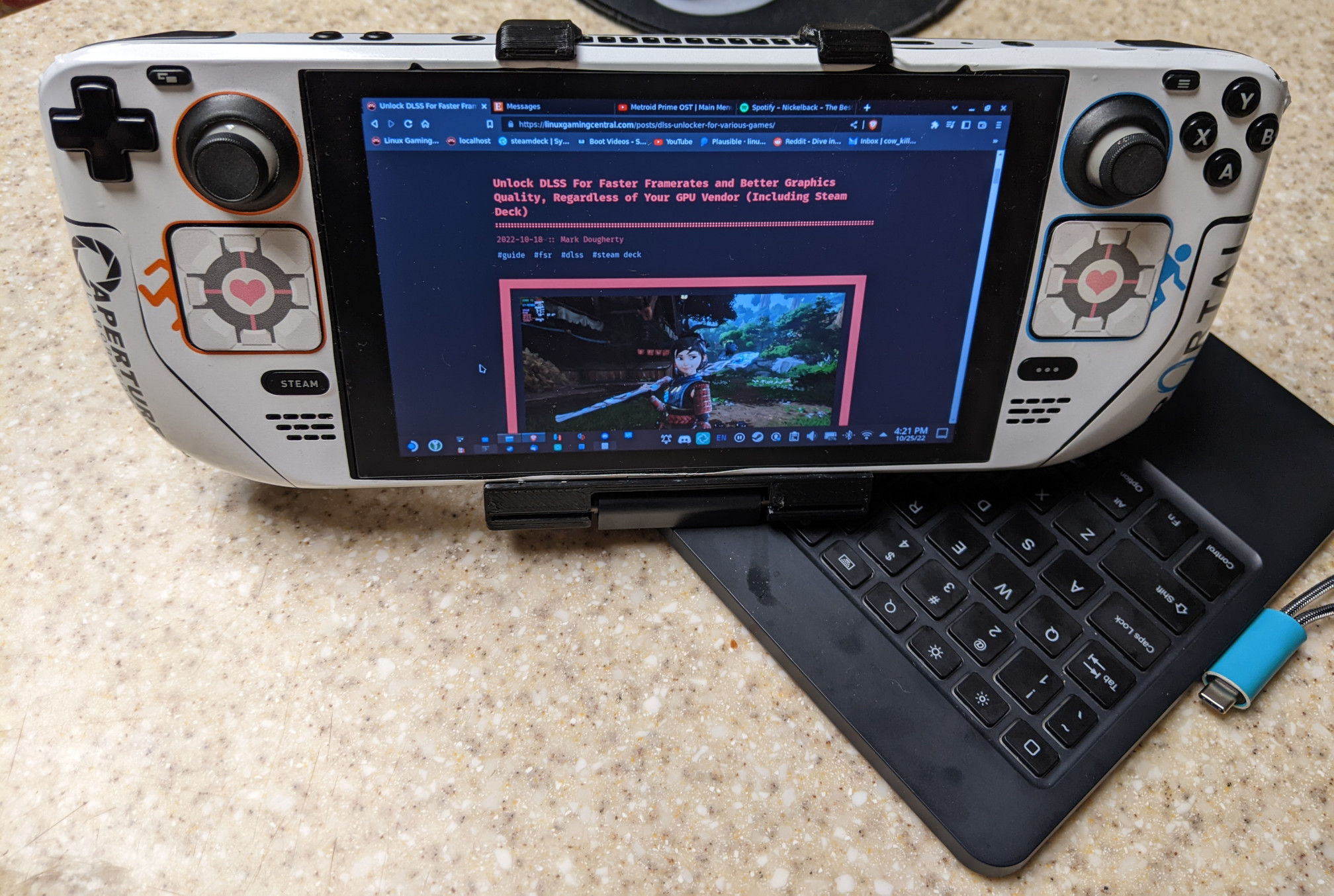 Special thanks to Steve from DeadEyeVR for sending the review unit over, and for promptly getting back to me whenever I had any questions.