One thing that always puzzled me is why Valve didn’t include a kickstand for the Deck. I’ll probably never know, but I can at least guess that it was likely a way to cut costs down during production. I’m happy to report I now have that accessory, which – to be quite honest – is essential for a device like the Steam Deck.

But I didn’t just get a kickstand. I also got a wall mount, a VESA mount, and a couple of “pucks”; something where I can attach pretty much anything, be it a USB-C dock, a battery bank, or a beer. 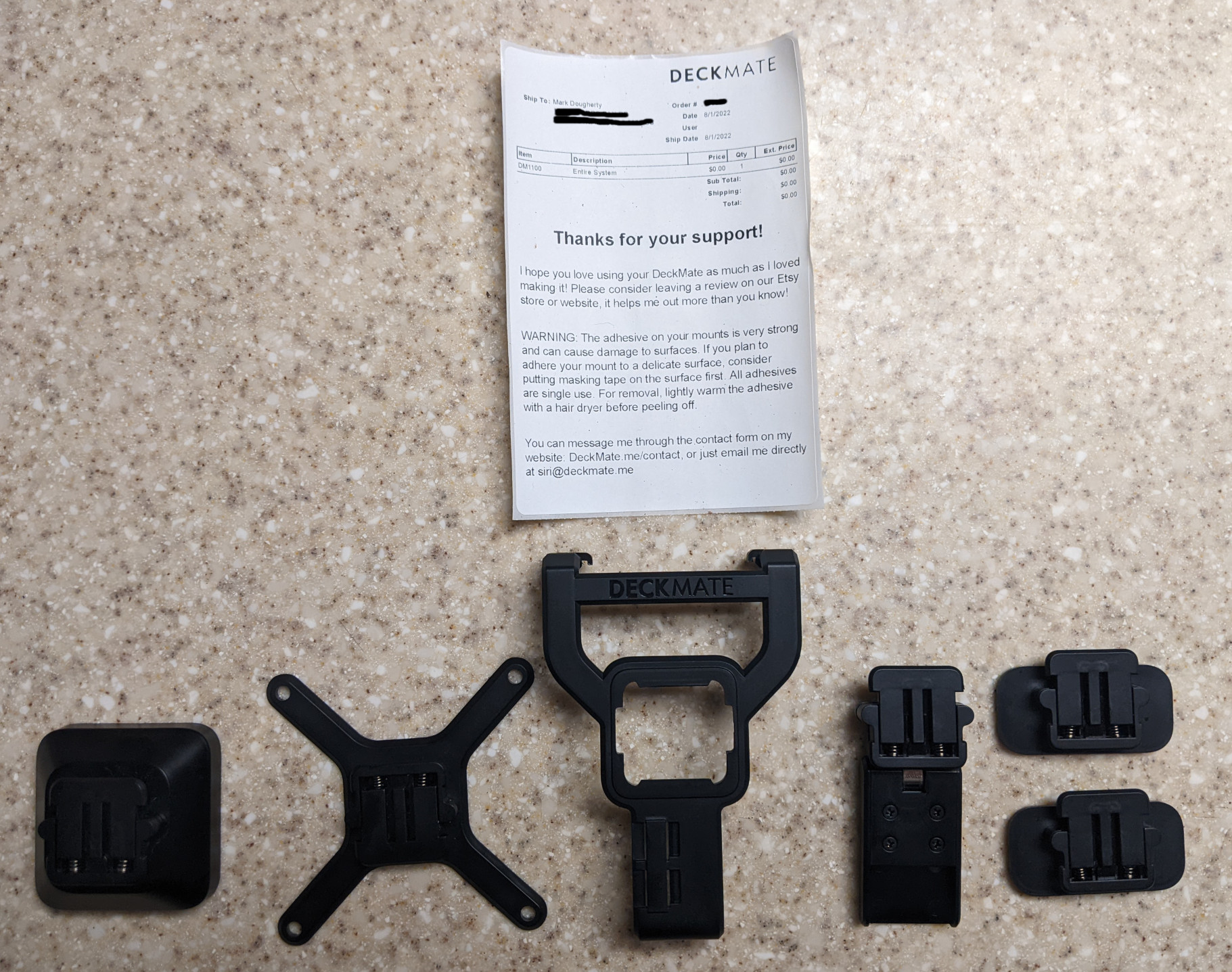 That’s the beauty of the DeckMate. It’s the swiss army knife accessory for the Steam Deck. Included in the kit is a little welcome note by the creator of the DeckMate:

I hope you love using your DeckMate as much as I loved making it! Please consider leaving a review on our Etsy store or website, it helps me out more than you know!

There is then a warning regarding the attachments with adhesives, that they are strong, single-use only, and masking tape should be used if they’re being mounted on a delicate surface. If the mount needs to be removed, a little bit of heat can be applied with a hair dryer to help assist with the process. There is then a few ways in which you can get in touch with the creator should you have any questions.

The meat and potatoes of the kit is the grip – as pictured in the cover photo – which wraps around the back of the Deck and clips on the top and bottom. This doesn’t serve much of a purpose without any of the attachments, although it can hold two MicroSD cards. This is pretty convenient if you have multiple distros that you want to try out on Deck and have one installed on each card; you can quickly swap out between cards and put the other one back in the clip for safe storage. Only problem with this, at least as far as the slot on the bottom, is that it can be a bit of a pain to get the MicroSD card back out. You kind of have to slide it out by pushing your fingernail against the little ridge that’s along the edge of the card. 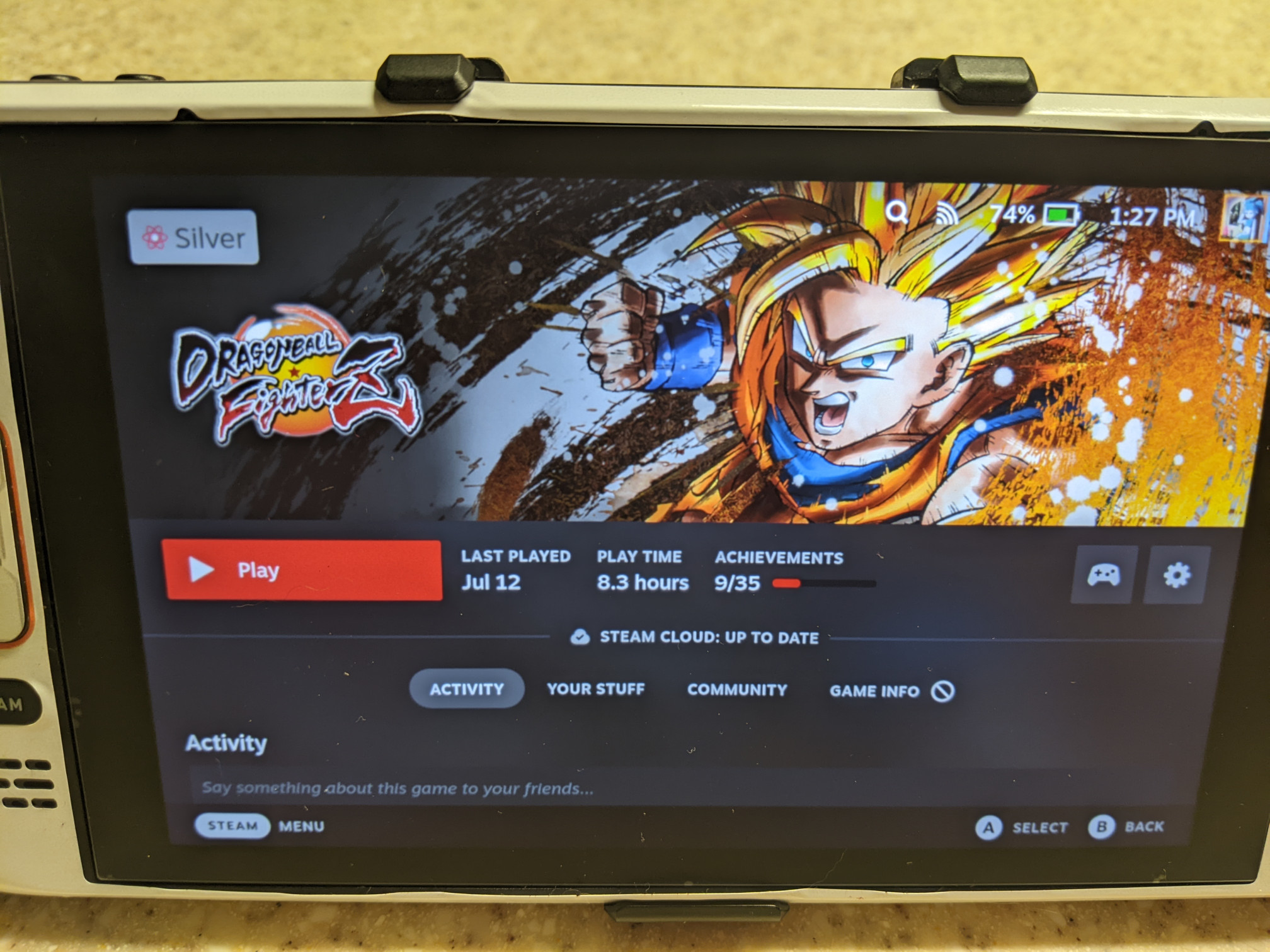 Something that is a bit of concern to me – and maybe I’m just being a little overparanoid about this – is the two clips on the top side of the grip latch on to the outermost ventholes on the Deck. This allows the grip to…well, get a better grip. There’s 11 ventholes altogether and two of them will be partially blocked with the grips. I haven’t experienced any overheating issues while playing, so maybe my doubts are unfounded.

The grip is thin enough that you can still fit the Deck inside the case that it came with. I mean, the bag will be open just a tiny bit before zipping, so those of you with OCD might be irked by it, but the whole case zips up just fine. Heck, you could actually fit the kickstand in there too, although I wouldn’t recommend it since the screen will be tightly pressed against the foam of the case when it’s zipped up. 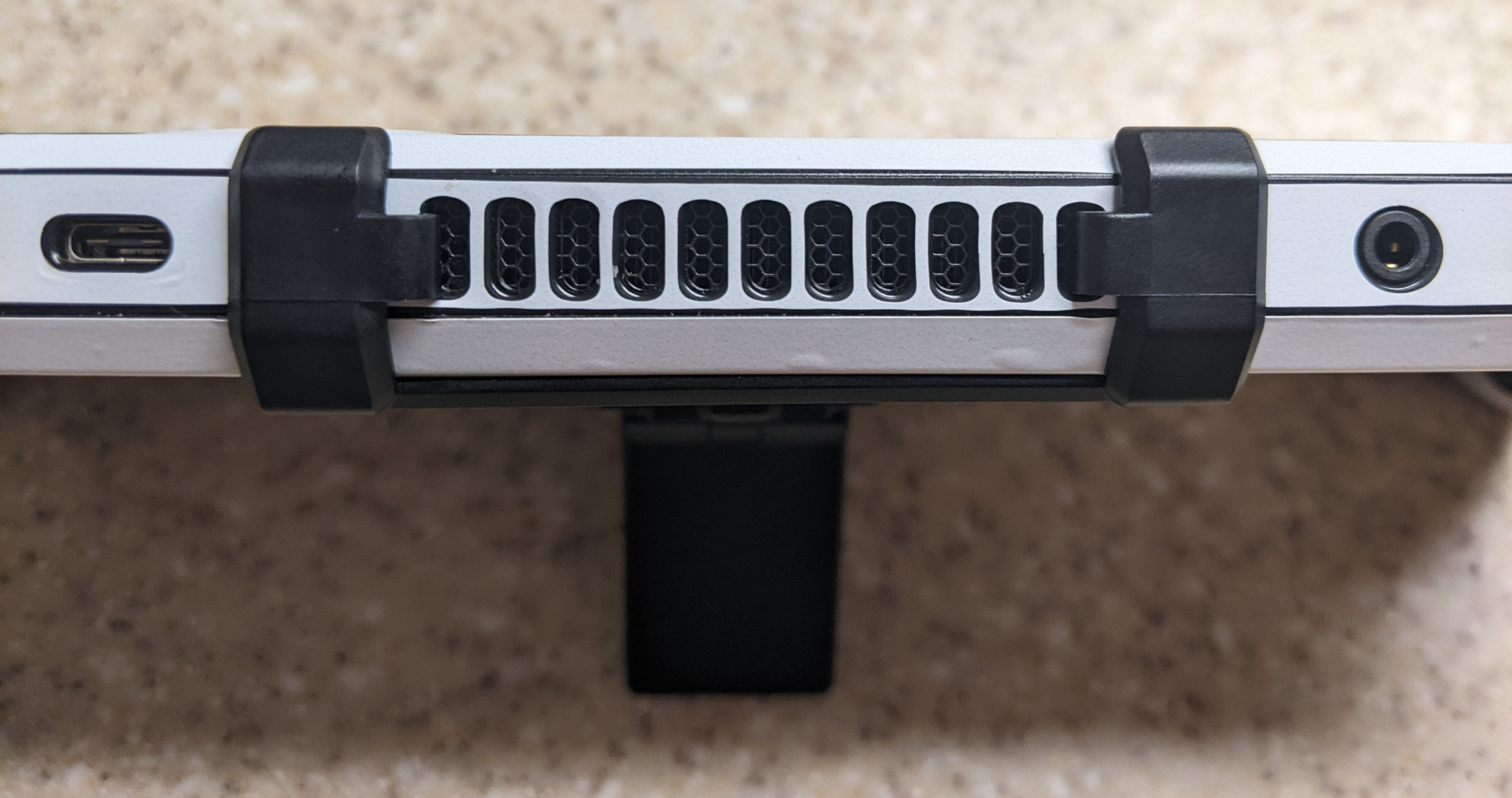 Note that the grip is very important to have – without it, you can’t use any of the attachments.

The attachments have a sliding mechanism. When you want to install an attachment, you push it up in the center of the grip, which will cause the clip to slide down. Release and now the attachment is installed. Remove it by pushing the accessory upwards again and gently prying the clip out. Pretty neat; you can easily and quickly swap out attachments at will.

For the kickstand, I was previously using a Steam Deck stand, and while that served it’s purpose, I think I prefer the kickstand over it. The kickstand takes less real estate on your table or desk, plus you can adjust it anywhere from 0 to roughly 135 degrees. The kickstand is an awesome accessory to have when taking photos of your Deck, or if you want to use it as a desktop. You can see what’s on the screen without having to bend your neck over. 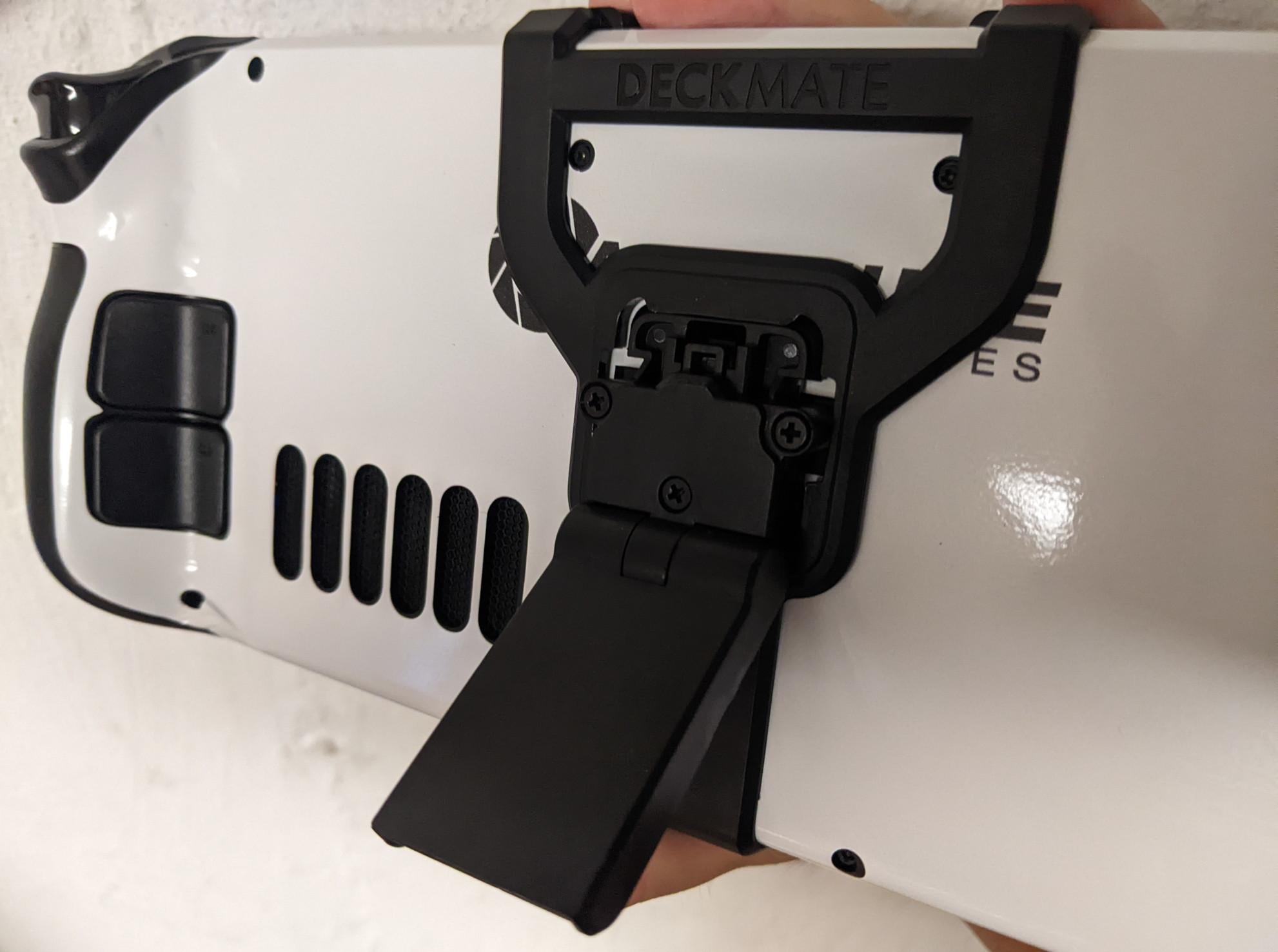 Only gripe that I have with this is I wish the bottom part had the sticky surface like the pucks and wall mount do. So, say for example I wanted to rest the Deck on the table with the kickstand. I can’t easily add a USB-C dock here. If there was a sticky surface I could add my USB-C dock to it and not have it lying awkwardly around in the air. I’m probably not making much sense here; maybe I should explain this by video.

When you buy the whole kit, you get two “universal pucks.” These are essentially a smaller version of the wall mount, where you can mount practically anything you want to the Deck: a USB-C dock, a power bank, an external hard drive, etc. According to the official website you can even use these as a cup holder, though I wouldn’t recommend that since liquid may spill over and into the internals of the Deck.

There’s a red 3M sticker that covers the adhesive. Honestly, this probably took me a good half hour to take off. You’re going to want to have razer-sharp fingernails because you’re going to have a hard time peeling this layer off. Even resorted to using my teeth a couple of times (yeah, I know that’s not recommended but I couldn’t think of anything else). Now that I have that gross picture in your mind, you can now see how much of a pain it was to get that bloody red sticker off. 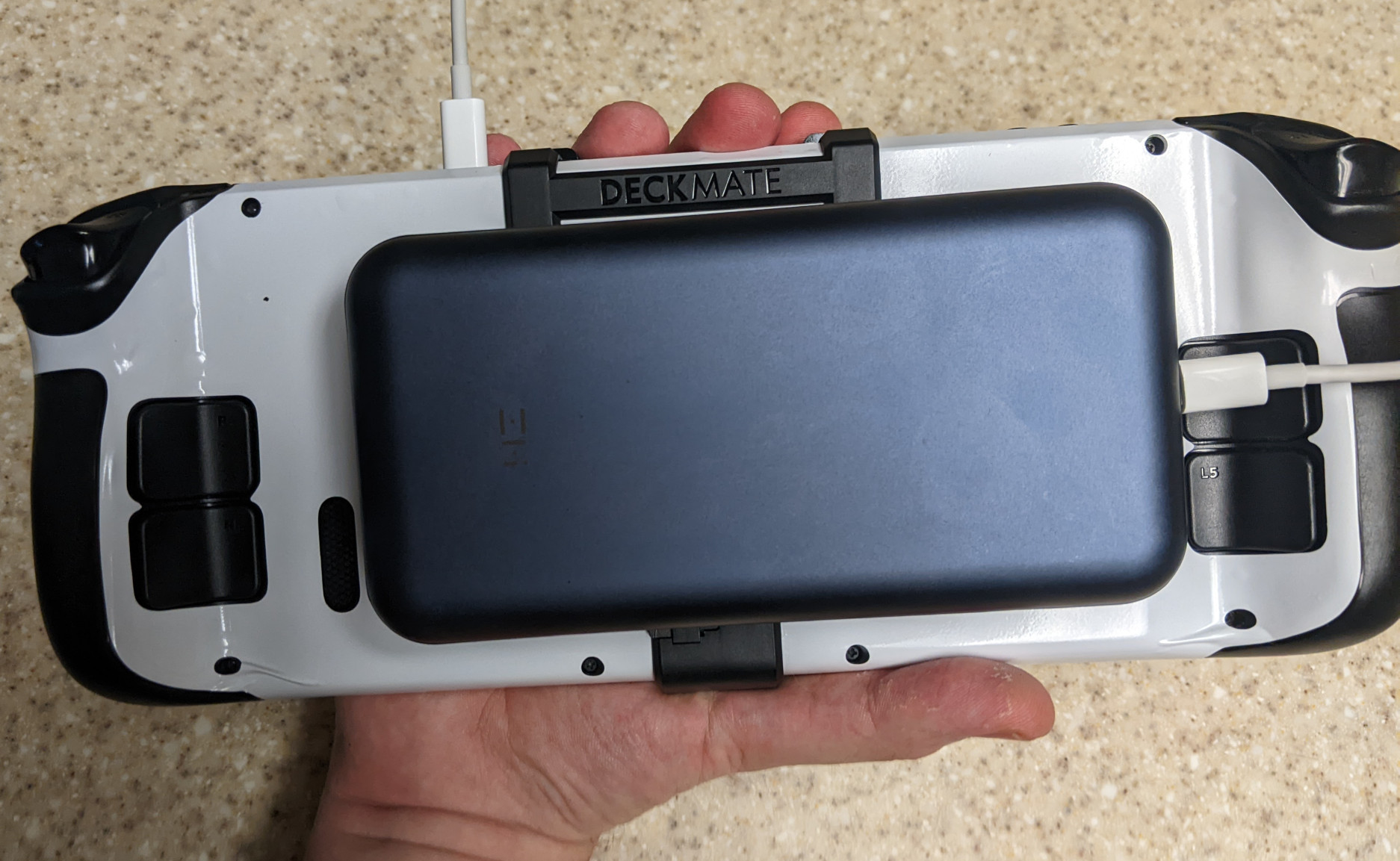 Once you take that sticker off, though, you’re going to have an adhesive so strong that the site warns that you should put masking tape on the surface of whatever object you’re trying to apply, if it’s delicate. And it’s a one time use, so choose what you will stick to it wisely. Believe me, you’re not going to be able to take it off once it’s on, even if you apply heat with a hair dryer.

But in the end that strong adhesive is good measure. I have a power bank that weighs almost a pound, but with it attached to the back of the Deck via the puck, I don’t have to worry about it falling off anytime soon. Now with this power bank mounted, I have extra battery life whenever the Deck is running out of juice. The problem here is, of course, I put the bank on the wrong way, and now my left hand can’t comfortably wrap around the grips because the USB-C cable is in the way. I’ve tried taking the puck off the bank, but to no avail. That’s how you know how strong the adhesive is. 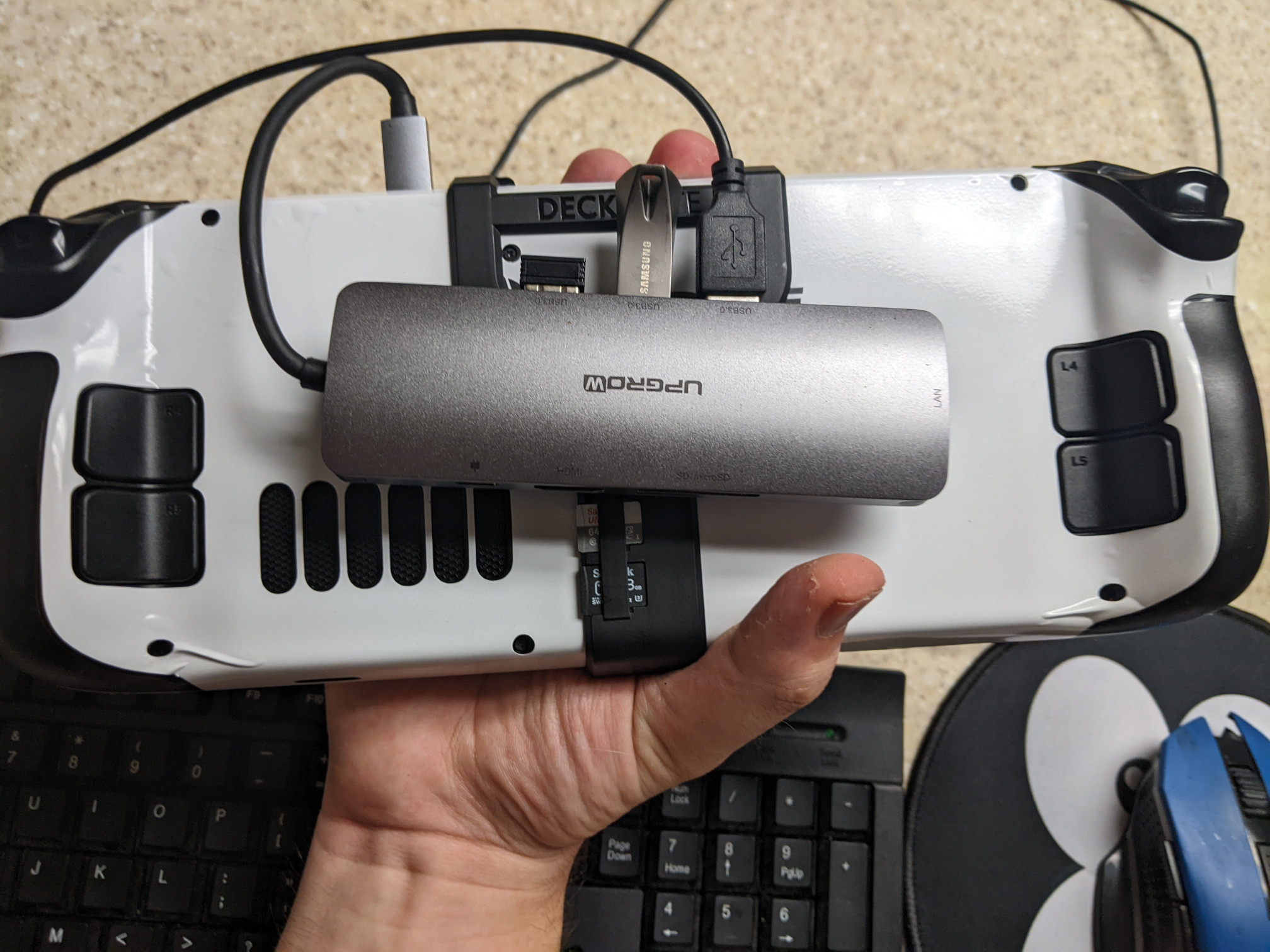 I made use of the other puck with my USB-C dock. This makes having access to additional USB ports convenient, but at the expense of not being able to use the kickstand in conjunction with this, I can’t lay the Deck down flat on any surface. I kind of have to leave it against the wall for now or just use my hands to keep the device held up.

I frankly don’t know what purpose this serves. I mean, obviously it’s for attaching the Deck to a wall, to the edge of a countertop, or on the ceiling, but why would anyone want to do that? Perhaps so someone can make a portable jukebox out of the Deck and make the audio louder by bouncing the sound waves off the wall? Or to reduce workspace clutter? Beats me. You guys can let me know in the comments what you’d use the wall mount for. And just like the pucks, taking the red sticker off was a PITA. 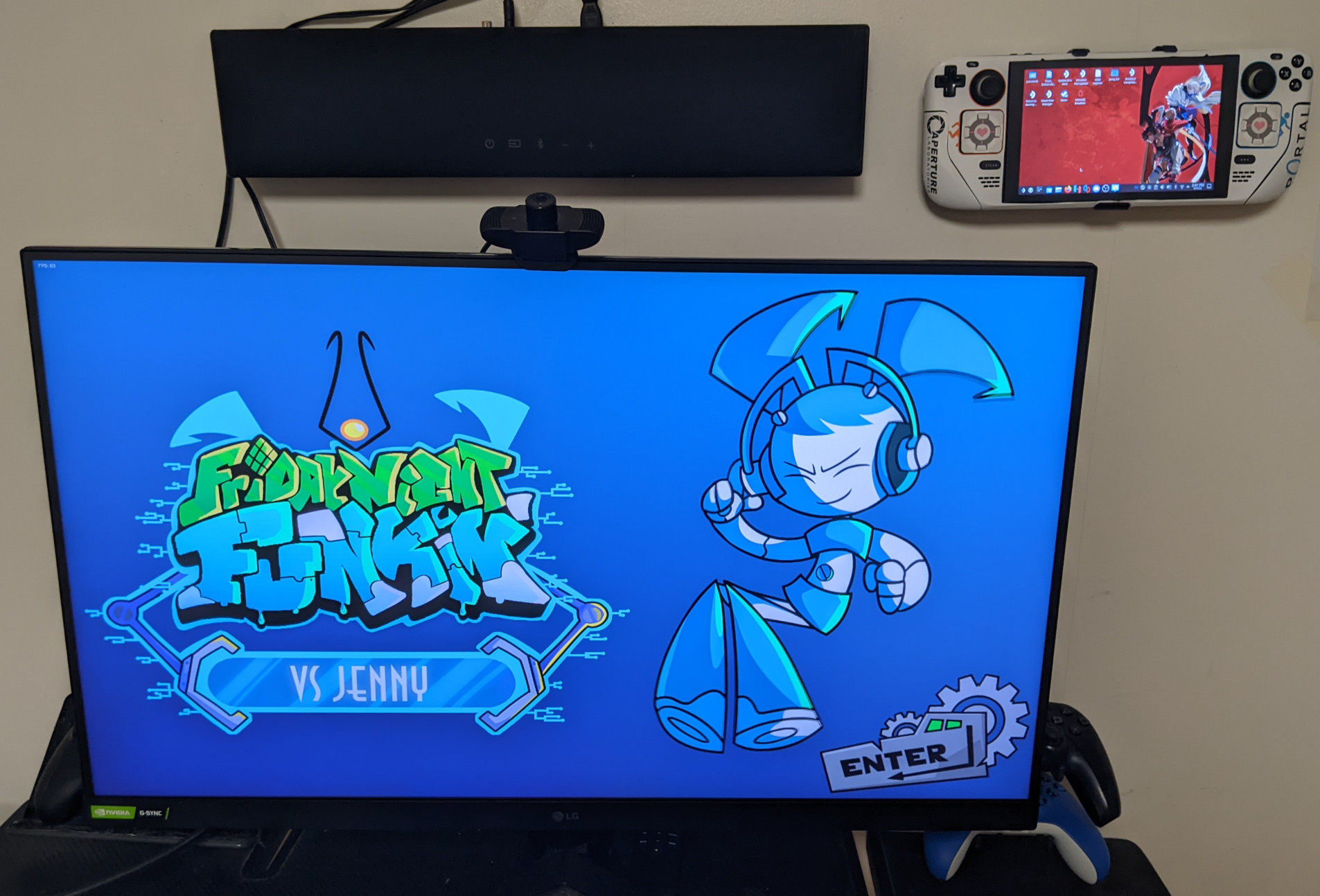 I can definitely see the advantage of having the VESA mount…if I had a monitor with which I could mount it to. All three of the monitors I have in my house sadly don’t have them. Would be great if they did; it would definitely help out with cable management and having more space on my desk. That being said, this can be used on more than just monitors; anything that supports 75mm design, including display arms and pole mounts, can be used with this.

The entire kit – or as the website puts it, “the entire enchilada” – is priced at $49 and comes with the following:

Shipping is $5. You can buy the DeckMate from the official website directly, or get individual components from Etsy. Overall, yes, I definitely think it’s a good deal for what you’re getting. I could probably get away without one of the pucks, as well as the wall and VESA mounts. So that would leave me with the grip, kickstand, and one puck. The three of those together would cost $42. Not saving that much money in the end, so yeah, I would certainly get the whole enchilada – you get a lot more bang for your buck, even if you don’t make much use of some of the attachments.

I really like the idea of having detachable accessories. Use the DeckMate as a kickstand one moment, then attach a battery bank the next; it’s a really nice system. It’s great being able to easily swap out MicroSD cards as well. The wall mount doesn’t make much sense to me, but everything else is a worthy accessory to have. Plus, if you have a 3D printer, you can print out the parts yourself! 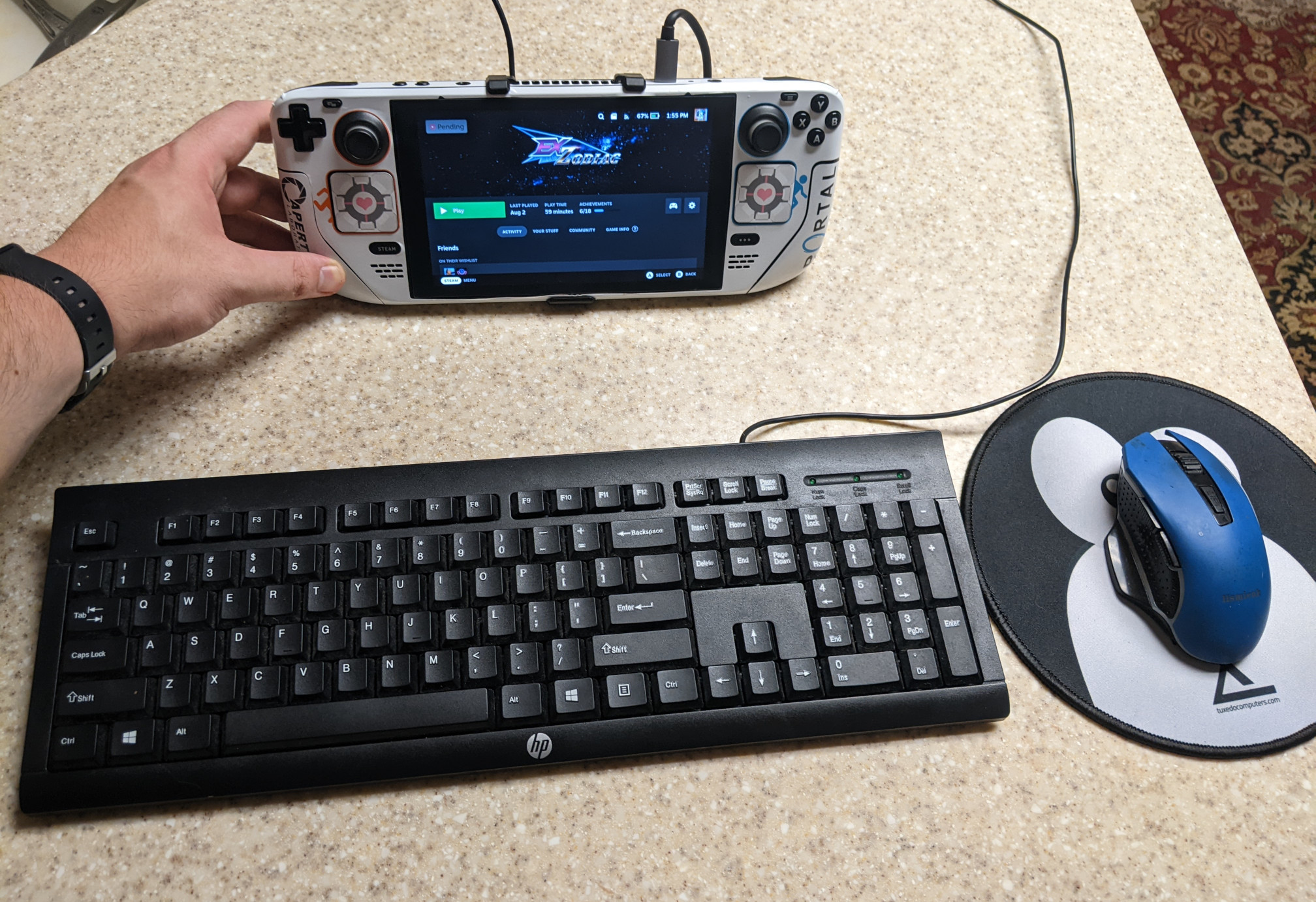 Only problem that I foresee is where you’re going to keep the attachments. Yes, you can keep the grip on the Deck while it’s inside the case, but where are you going to keep the rest? You’re probably going to want to have a bigger case than the one Valve provides or even a small bag if you want to take these accessories with you on the go.

Let me know if you guys want a video to go along with this review! And if you’re curious about the Portal skin, I wrote my thoughts on it yesterday.

Review unit sent courtesy of u/Sea_Minerals. Opinions are of my own.