Well well well…the 15-year-old game gets a new makeover. Loved the original back on the PSP. In fact, my older brother at the time took over my PSP and bought the game just so he could play it. Despite it not being as full-fledged of a remake as Final Fantasy VII, I still welcome it, as it’s a really good game.

In a nutshell, the Crisis Core remake has been ported to Unreal Engine and has the following advantages over the vanilla PSP version, besides the obvious graphics upgrade:

Honestly, other than that, there’s not much else. The animations and combat mechanics are nearly identical. Even the traditional flip phones are still used – I was expecting them to have smartphones at this point. The controls are going to take a little more adjustment if you played the original. For instance, by default Zack attacks with the X button on Deck. On PSP, it was Cross. Dodging is done with the A button on Deck; Square on PSP. Customizing the controls is possible, however.

Magic attacks can be deployed more quickly now by holding the Left Shoulder and pressing one of the face buttons. On the original, you had to cycle between the commands by pressing L or R, then pressing Cross. Also, DMW now has a “reserve”; special attacks can be used at any time by pressing the appropriate button, after it’s been unlocked, rather than having them executed automatically.

But on to the Deck report. It runs great. Matter of fact, with GE-Proton7-42, I can get away with 7 or 8 W TDP and get mostly 60 FPS on High graphics settings, so long as the resolution is set to 1024 x 576. Speaking of resolution, only two are available in fullscreen and virtual fullscreen: 1280 x 800 and 640 x 400. But if you change it to windowed mode, a lot more resolutions are available. 1024 x 576 still looks decent while taking advantage of FSR.

Average power consumed during my testing – most of which was at 60 FPS – is about 15 W. So you should expect at least two-and-a-half hours of gameplay time. You can set the refresh rate to 40 Hz and clock the TDP down to 5 W. Don’t set the TDP any lower than that; even 30 FPS can’t be reached at 4 W. I’ll need to do some more testing to know how long the Deck lasts at 30 and 40 FPS. 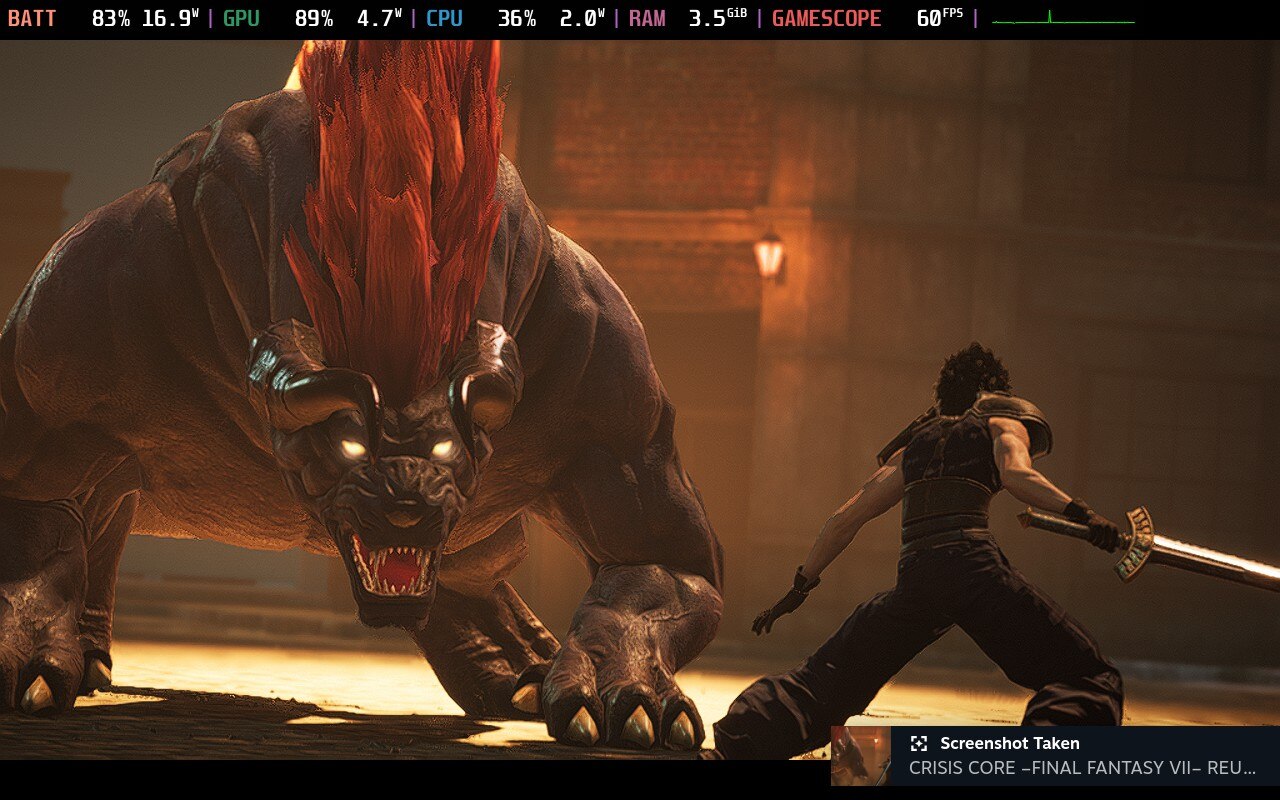 I have a video if you’d like to see the game in action. Crisis Core Final Fantasy VII Reunion is available on Steam for $50.